At first, you’re certain that it’s a long exposure, ribbons of pink light unfurling themselves for the frame. Then a slow-moving jellyfish or sea anemone, thin walls expanding and contracting as they move through water. Or maybe a red blood cell, flayed open with a microscopic tool.

But “Rose Fractal Cylinder” is none of these. It comes from a machine, swallowing computer code to spit out something human-like, but more exactingly imperfect. And that’s exactly the way it’s supposed to be.

It's a piece in Art From Code, a new suite of works from teacher and artist Dan Gries on display in the Ives Gallery of the New Haven Free Public Library (NHFPL) through March 15. A selection of works generated entirely from computer code, the exhibition pulls works from the past few years, entering a kind of beautiful and geeky realm. Library hours and more information are available here.

Art From Code starts and ends with the artist’s fascination with imperfection—circles that aren't quite closed or contiguous, lines that stack and sway but are never totally uniform, wooly clouds of color that billow out with a certain exactitude. A few years ago, Gries began writing code in a computer program called Processing, which translates original code into visual imagery. He discovered quickly that imperfection is actually harder to program for—that it’s easier to write code for a perfect circle than an imperfect one.

Instead of brandishing a paintbrush or chisel, Gries would sit down at a computer with “a simple idea,” pump out a code that accounted for imperfection, probability, and randomized color, and see what the program spit out at the end of a session. Only rarely, when the yoking of color and form appealed to him, did he save the images.

“It’s very iterative,” he said at an opening in late January. “I want to justify the use of a computer. You get a different language, a different vocabulary, for every picture.”

The process suits him. A math and computer science teacher at Hopkins School with a doctorate in math, Gries got into code while he was teaching at Merrimack College, and went to a workshop on computer programming designed for math faculty. The subject matter hooked him. He taught himself the intricacies of code, drawn into a world that pulled together brains both human and mechanical.

“It just came out of me,” he said, adding that he does not consider himself particularly artistic (he joked that his last art class was several decades ago, when he was in elementary school), although he sort of fits into a tech-meets-folk tradition. “I wanted to just draw pictures.”

But the works in Art From Code, pulled from the last few years of experimenting with Programming, feel more profound than just pictures. In Gries’ series of imperfect circles, we go from doodle-like to almost molecular, pulled in by something that feels more human than computerized. 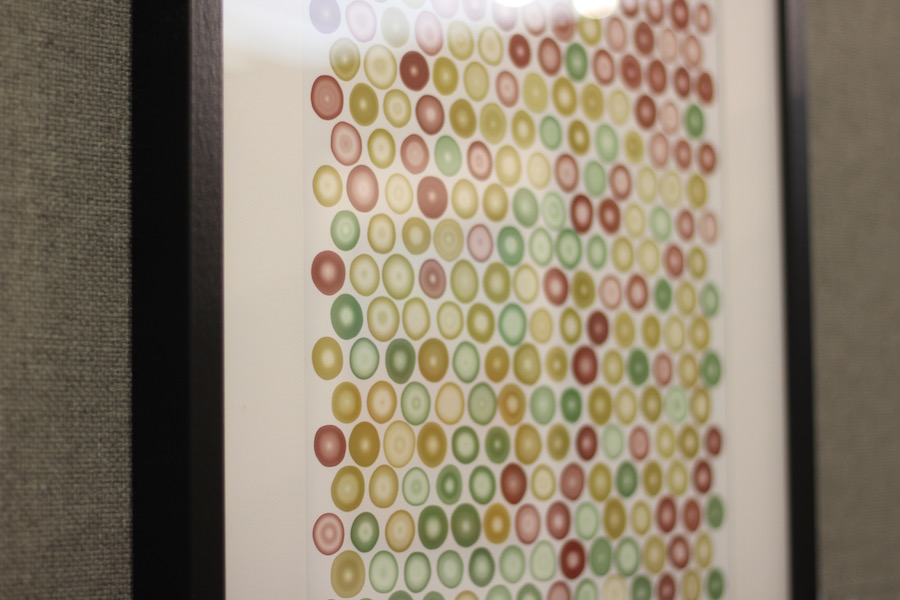 In “Red Yellow Green Dots” (2017), the sides of the dots oscillate, playing tricks on one’s eyes that warrant a second look. So too in a series of spirally black dots on a long white page, where code for probability has created more open white space at the top, and code for imperfection translates to thick sides on some dots, and pencil-thin ones on others.

The images don’t just appeal to Gries’ own interest in modern art, where color and space become paint drips and color field canvases—they’re genuinely artistic, almost photographic at times and drawing-like at others.

And, at perhaps their most intriguing, hard to discern as not computerized. In several images where Gries has written a code for fractal cylinders, the final compositions look like long DSLR exposures, with randomized color combinations in rose, green and gold, and an electric orangey-red. From both far away and close to the image, these do not seem like products of technology but of the natural world, spinning filaments of light in black space. But a longer look, and they reveal their sharp, mathematical edges, lines cutting into each other in a dizzying, fantastic blue of color.

So too in prints from Gries’ Chaos series, where we come face-to-face with swirling clouds of color that resemble snapshots taken from space, documenting the ozone as it falls apart and the earth warms below. Or of another, brighter universe entirely, where a bright cloud of color curls in at the bottom and sides, as if it is gathering momentum for a coming storm, and plans to drop wool and paint in its path.

They’re not, of course: they’re nothing more than carefully plotted points that were once on a screen, and are now on a page. But they leave us wondering: what don’t we know about the worlds around us, both natural and not? Where, we find ourselves thinking, are the limits of one and the other? And where do they collide?