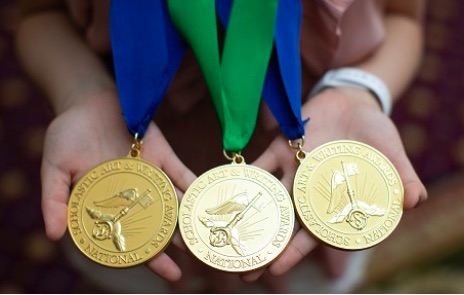 Two friends sit in the front seat of a car, thick streams of rain racing the windshield. One opens her hand and then clasps it, an invitation. Water gathers around the car, fog rolls in. They are not practicing social distancing, but this is also a world where COVID-19 does not exist.

In another universe, a poet learns to fill a jar with lemon and water. She mixes in honey and sugar, lets it turn pulpy and warm in the sunlight. She is thinking about the next time she may see her grandmother again.

Another writer, not so far away, is looking at old photos of her family, in a time when life seemed simpler. The ocean is close again; she can almost hear the waves.

The vignettes come from Ana Paula Padilla Castellanos, Tirion Rodger, Jordan Hines, all students at the Educational Center for the Arts. In March, all three earned national recognition from the Scholastic Art & Writing Awards.

Senior Padilla Castellanos took both gold and the American Voices Medal—awarded to the strongest submission from the region—for her essay “Come to the Water.” Rodger, also a senior, took a silver medal for her piece “Your Life Aquatic.” Hines, a freshman, also took silver for her poem “Pickled Lemons.”

The news was announced last month, just days after students were told that school was closed indefinitely due to the threat of COVID-19. On social media, both ECA administrators and teachers from the writing department praised the students.

Padilla Castellanos, who will be attending Yale in the fall, said the work came out of a summer course on writing about family. Six years ago, her family moved to the U.S. from Guatemala, taking a plane over the Atlantic Ocean after a life spent close to the the Pacific.

When they first arrived in New Haven, the family shared a two-bedroom apartment. She learned to take the city bus with her mom, an event that ended in one deeply disappointing trip to the beach. The longer she spent in the city, the more she missed home.

In "Come Into The Water," she has channeled all of that into seven neat, wildly poetic pages. From nearly the first sentence, she weaves the ocean of her childhood—still so clear a reader can see it—to the  brackish reality of the Long Island Sound. A reader can feel themselves holding on: the nostalgia is almost too much to bear, but it's also a reason to keep going.

"I’m a nostalgic person, so looking back on things that have happened to me is a form that works," she said. "I think personal essays are nice because it’s nice to talk about what you’ve gone through."

She added that in the midst of COVID-19, the sense of being land-locked has taken on a whole new meaning. Her older siblings have returned from college, meaning the whole family is sharing their two-floor apartment in New Haven. She misses school. She's worried about the realities of a global pandemic—and the fact that she might not get to see her friends before they leave for college.

"I remember being a freshman and being told that second semester senior year is when you get to really relax," she said, adding that she has worked to maintain a writing practice. "And it’s like, actually you have to go home. I work better with deadlines. It’s harder to be motivated. I love workshopping so much, and so far we haven’t been able to workshop yet."

For Rodger, who is set to graduate this year, the announcement of the award came when she may have needed to hear it most. In early March, she was still spending time with her friends and sketching out plans for college. Just weeks later, she’s become familiar with the fundamentals of online learning and sheltering in place.

“When I heard about it [the award], I was in my bed doing nothing, and kind of wallowing because I wasn’t going to school,” she recalled in a recent phone call. “And I felt like, ‘I don’t deserve this, I’m not doing anything right now.’”

But when the feeling subsided—and it did—Rodger was also excited to be recognized for the work. As a young writer, she has plowed through Ursula Le Guin, Gabriel García Márquez, James Tate, David Sedaris, Connecticut-raised Ocean Vuong and ECA teacher Sari Rosenblatt.

She has grown particularly fond of flash fiction, which Rosenblatt teaches. “Your Life Aquatic” came out of that genre, inspired partly by news on rising sea levels that Rodger was learning in her environmental science classes.

In the story, readers are dropped into a world where the sky has opened up, and rain has kept falling for months. It doesn’t look good for the young narrator’s town: water will soon cover streets and roads, trees and homes. It has already started to creep in well past where the beach should be.

And yet, even with an emergency on the horizon, Rodger’s narrator has other things to worry about. The newscaster is a scumbag who doesn’t deliver much news. Parents still set curfew. There’s a best friend that wants to hold her hand. It is, surprisingly or not, extremely resonant in the midst of a global pandemic.

“Basically, these two girls are navigating the end of the world,” Rodger said.

In between sentences—which are clean and concise, with lovely turns of phrase—the young writer shows the reader what they may too be feeling: the need to hold on to small, fundamental pieces of routine, like falling in love and driving home through a storm.

“I guess I always try to start with an idea,” Rodger said. “I’ll write a paragraph or so with flash fiction. I’ll let it sit for a while, then come back to it. I don’t finish it all at once.”

That resonance also comes across in Hines’ work, based on lessons that she’s learned from her Chinese-American grandmother. For years, her grandmother taught her to submerge lemons in water and let them sit with honey or sugar, decomposing into a sort of yellow, pickled concentrate that would always cure a sore throat.

On summer visits from California, she would pack her cooking with ginger and garlic, feeding her extended family for weeks on end. And then, she’d get back on a plane and return to the West Coast. When Hines originally wrote the poem—well before any whisper of COVID-19 was in New Haven—she’d been getting more email messages from the old woman.

“She has always sent a positive list of affirmations,” she said. “I was thinking about her. She calls me this little Chinese nickname, ‘mo jie,’ which means ‘slow girl’ [in Cantonese]. The poem was a way of saying, ‘I’m thinking about her.’”

In the piece, she traces out their relationship, navigating distances that are linguistic, physical, and cultural. She makes time to praise broken English and remedies that once struck her teenage self as odd.

She makes space for her grandmother’s aging body, now wracked with sciatica. She writes through her uncertainty that she’ll see her grandmother, who typically visits Connecticut in the summer, this year. It is unbelievably tender.

Writing the piece itself was also a revelation to Hines, who started her time at ECA with a rigid definition of poetry (“I had this idea that you had to use rhyme, and you had to use iambic pentameter!”), and has since ventured into prose poetry and experimental form.

She recalled reading a collection of modern poetry in one of her first classes at ECA and feeling liberated as a writer. While she is taking her classes remotely from home, she said she’s tried to stay motivated and stay writing.

“I have this huge, enormous list of ideas in my Google Drive,” she said. “Sometimes it’s a title that just sounds cool. Sometimes it’s a character or personality, or things that I’ve seen other people do. I’ll put them down on a sticky note or my phone. Like, ‘Oh! This sounds cool!’ And I expand it from there.”