Eddie Rivera Takes Us To Church 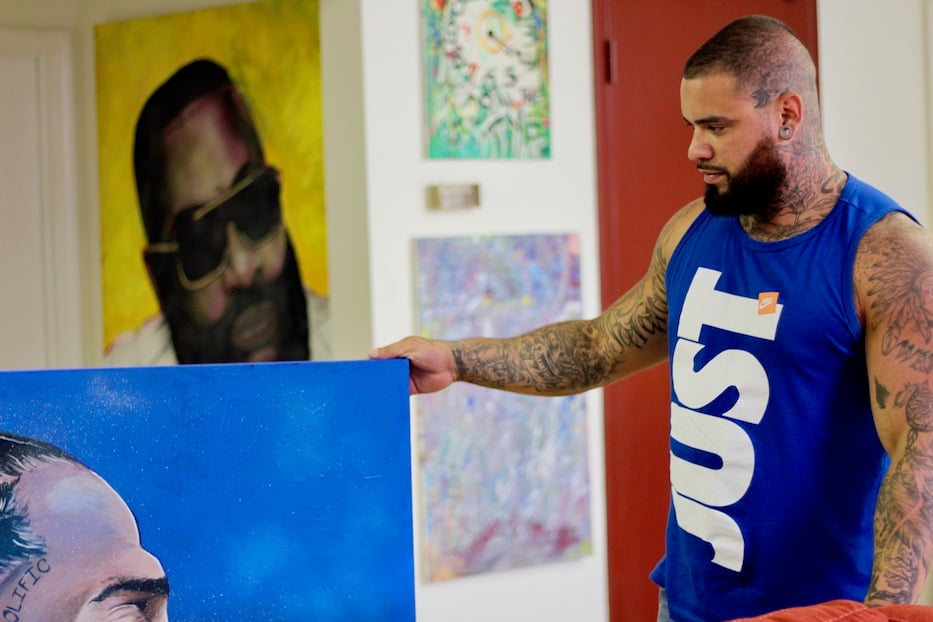 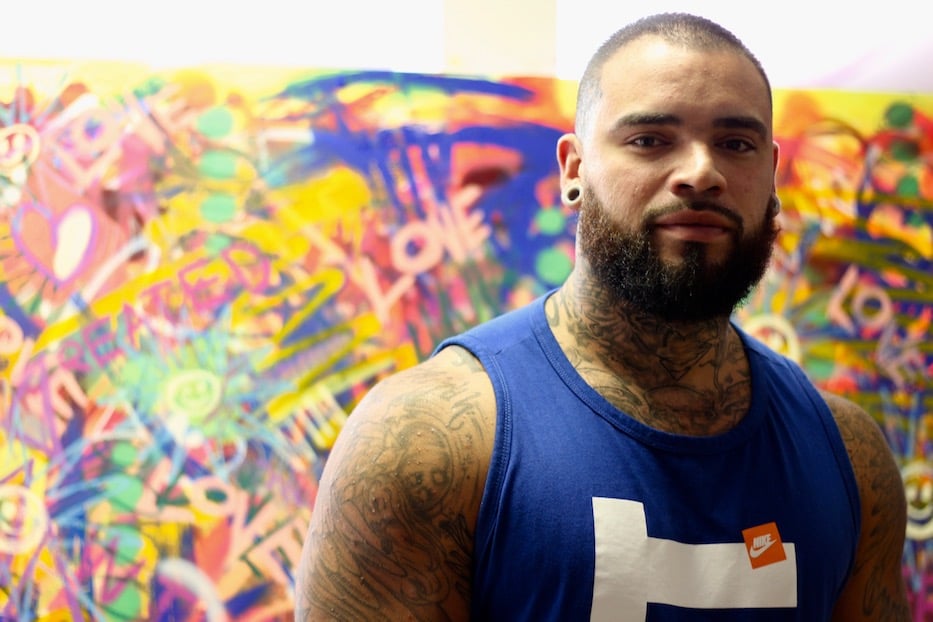 On the walls of Eddie Rivera’s studio, Nipsey Hussle looks out in profile, a rich blue background filling the space around him. Step closer, and it glitters just so in the light. Next to him, King Tut stares at the viewer with huge, pooling black pupils and eyes rimmed with kohl.

A clock melts as the minute hand inches past four. Just a few feet away, a bright yellow canvas beckons with sharp, smiling suns and thick swipes of blue and green. It’s not even noon, and Rivera has more work to do on that one.

Known for his large canvases, mad barbering skills, and burgeoning mural projects, Rivera is a painter and public artist based in Meriden, where his works include murals at the city’s Downtown Coffee Shop and Feel Fresh Hair Studio. Recently, he opened up his downtown work-live space to the Arts Paper for a tour, showing where he’s been and where he wants to go with his work next.

“I’m always trying different things,” he said, his studio heavy with the smell of acrylic and aerosol paint. “You know when you see artists and they’ve got one style and that’s like, their art? I don’t want that.” 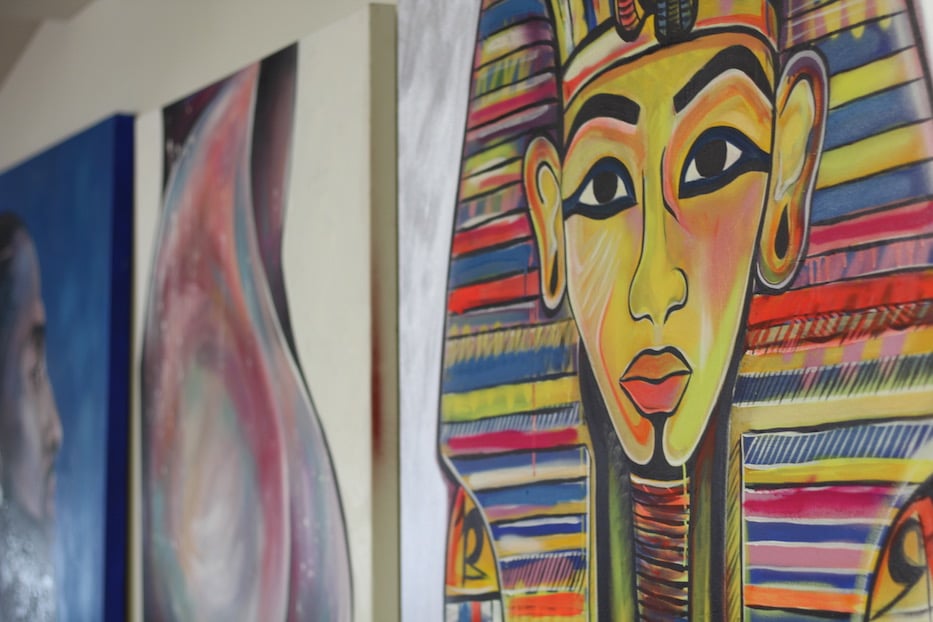 Rivera lives on Meriden’s Colony Street, close to the city’s Gallery 53 and the barbershop where he has decorated one wall with a huge, pink Octopus. He called it a good location for an artist: he and Meriden Artist-In-Residence Apollo Maldonado made a recent push to make Colony Street ground zero for a city arts revival, and have plans in the works to open a gallery later this year. In the meantime, a pop-up gallery sprouted beneath his building last December, and his canvases beckoned inside.

For the artist, the choice to pursue his craft goes all the way back to childhood. Born in Puerto Rico, Rivera moved to Meriden with his mom when he was three years old. He was inspired to pick up pencils and brushes by her then-boyfriend, also an artist. Even as a kid, Rivera saw the medium as his go-to—he recalled drawing a pizza in kindergarten that opened a door to drawings of superheroes, cartoon and video game characters, and a suite of Ninja Turtle painting years later.

But Rivera also struggled with his life in Meriden. By high school, “art was the only thing I wasn’t failing.” Midway through his teens, Rivera dropped out of high school. He went through a breakup that sent him into a deep depression. At some point, he heard that the artist who had inspired him to pick up a brush all those years ago had died of an overdose. He stopped making art and started using drugs. When he was 20, he was sentenced to a year in prison. 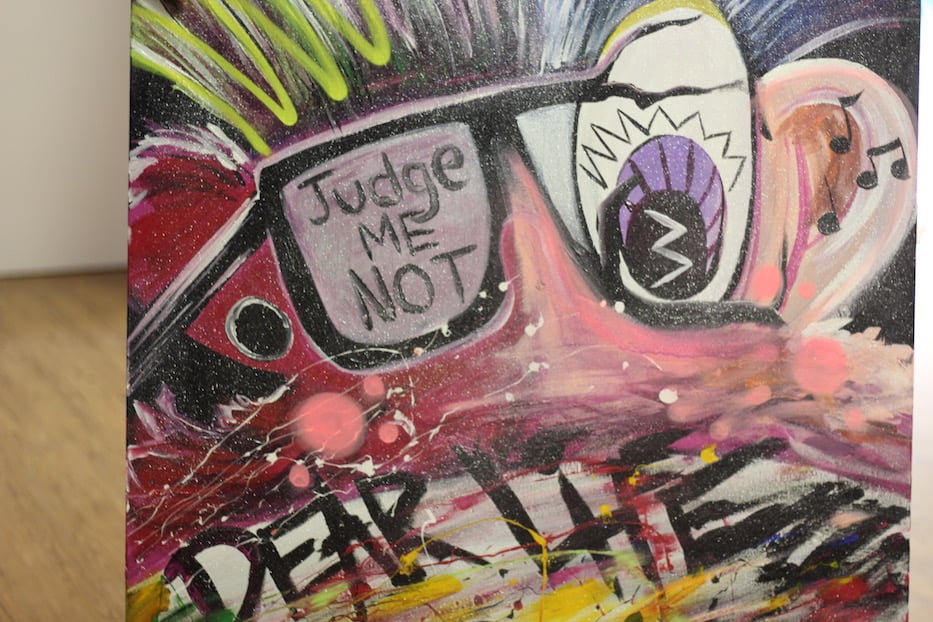 But prison, he said,turned out to be a roundabout way back into art. While there, he learned to cut hair—he later attended barbering school and now cuts at Feel Fresh Hair Studio—started writing music, and completed his GED. He resumed painting, trading pastel drawings on handkerchiefs for food at the commissary. When he returned to Meriden, he tried to edge into the music business and found that it was harder than he thought it would be.

Around that time, he started selling pastel and acrylic portraits of Ninja Turtles to people he met. Slowly, it turned into a steady side gig (Rivera said that he is able to support his art by cutting hair): patrons were willing to pay more than the few hundred dollars he was asking, and wanted to see what else he had up his sleeve. From a side gig, it became his primary love.

In the past 10 years, he has worked from smaller pieces up to large canvases, a cache of which he keeps at the ready with his supplies in his apartment. From cartoon characters, his body of work has exploded to include rap, soul, and R&B musicians, mythological, religious, and historical characters, and most recently women’s bodies rendered in sprays of rainbow color.

While he takes commissions from around the country—he credited social media in growing his exposure—he remains most excited about his own personal projects.

“I thought, I need to stop caring so much about what people want me to do and just do want I want to do,” he said. Recently, he added, he’s been trying to embrace spontaneity, and “just start to do what I’ve been thinking about” as inspiration strikes him.

Around him, the walls tell a story of constant experiment. Wiz Khalifa smiles and laughs from one side of the room; Michael Jackson from another. Large canvases explode in texture and color, with eyeballs that pop out, clocks that seem to be losing track of time. One is painted with the words Judge me not on a pair of eyeglasses, like a request to the viewer.

Recently, he’s embarked on a series based on the female body, where backs and butts become rounded spills of color. By his front door, one such canvas is still in the works. A woman’s slender back rises; she reaches out her ams and snaps a selfie. Rivera said he wanted it to capture a specific moment in time, when one’s image on social media became more interesting than the real thing.

Other portraits are elegiac, with Rivera’s own spin. A portrait of Jesus hangs in his bedroom, so it is one of the first things that he sees every day. King Tut’s sarcophagus is rendered in bright color, in a canvas where Rivera decided gold paint was overkill, and painted over it with white and a wash of rainbow. 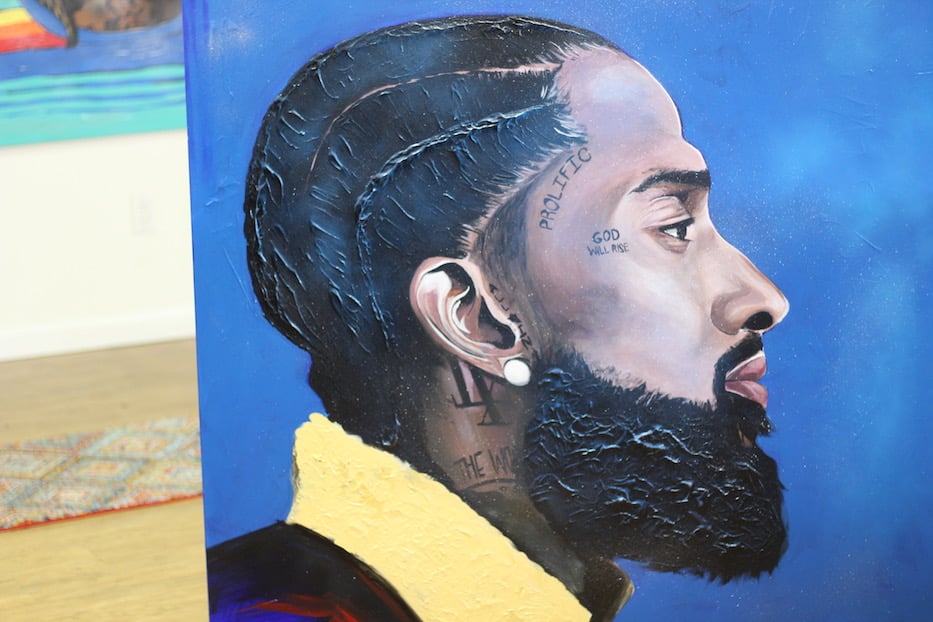 After hearing on the radio that Nipsey Hussle had been shot in April—"it cut right through me"—the artist came home and started working on a portrait based on a photo spread of the rapper he had seen. For years, Rivera had loved his music; he wanted the painting to reflect that. In the finished painting, the rapper looks out in front of him, confident and calm. His tight, immaculate braids are raised in shiny black paint off the sides of his head.

Rivera’s influences seep through the canvases: Pablo Picasso, Federico Uribe, Jean-Michel Basquiat, television painter Bob Ross, whose clean, joyous and silly paintings had a cult following. Jack Teagle and Anime alike. There’s a nod to Claude Monet in a small canvas with thick strokes of white, blue and green, inspired by the years in which the artist was going blind. Rivera added that he’s also inspired by his kids, the youngest of whom sometimes paints with him on a pint-sized easel designed for her.

When he is working, he said, painting puts him into a meditative state, in which he sometimes listens to a single song on repeat or sermons by Bishop T.D. Jakes and Joel Olsteen (while Rivera grew up Catholic, he describes himself as spiritual rather than religious). Recently, he’s been listening to a lot of Nipsey Hussle and the motivational speakers Eric Thomas and Les Brown.

At the end of a recent weekend, that soundtrack helped launch him into a new composition inspired by street art. A spray of color pops across the background: mostly yellow, punctuated by green dots that look like streetlights. Yellow and blue suns bloom in every direction. The word LOVE sprawled across the canvas in multiple colors 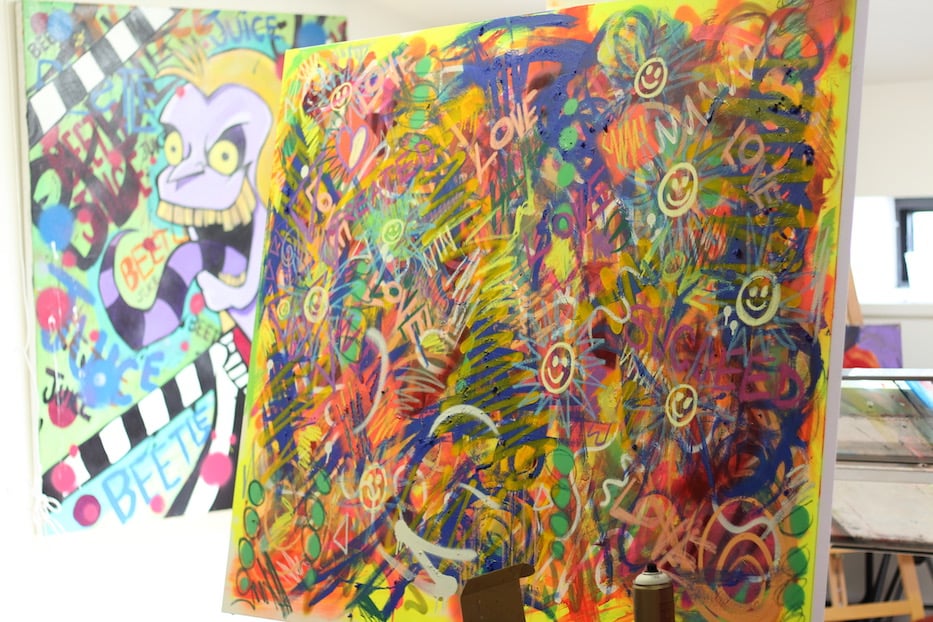 “When you look at this, I want it to make you feel inspired to be happy,” he said. “You know when you go to church and you leave feeling great? That’s what I want this to do. That you walk away feeling inspired and motivated.”

His painting has been transformative for him, he said. As a younger artist, he dreamed of working for Disney as an animator. Now, “even if they knocked on my door right now,” he would turn down the offer. He’s more excited about staying in Meriden.

“I just want to be free completely to do my own thing,” he said. “I grew up here so I want to make it better. I want to inspire the kids. I think the city needs more baseball and basketball, and also more artists and musicians.”

Earlier this year, he worked with Downtown Coffee Shop owner Tina Dalipovsk to raise funds for a mural on the side of her business. Just two blocks from his apartment, the new piece now beckons with beloved characters from Alice In Wonderland. Off center, a big-eyed Alice daydreams beside the Mad Hatter, White Rabbit, and the Cheshire Cat. Lush cartoon trees sprout around them.

He added that both a gallery idea and other mural projects, on which he declined to give specifics, are also in the works.

“I can remember calling my mom and saying ‘can I use your kitchen table to finish this painting?’ because I was living in my car,” he recalled. “Now I make six figures a year cutting hair. I’m pretty blessed. I thank god for that every day.”