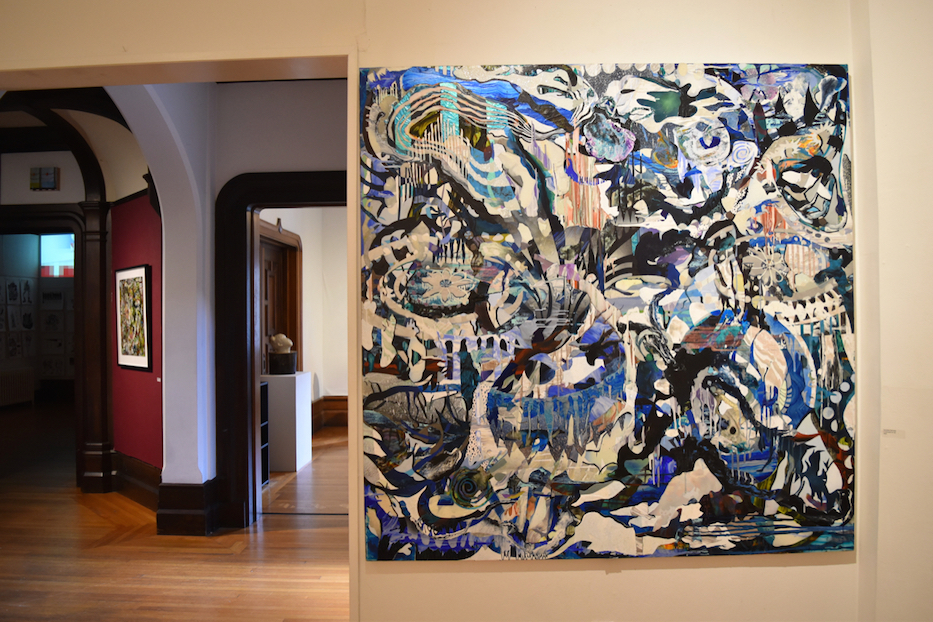 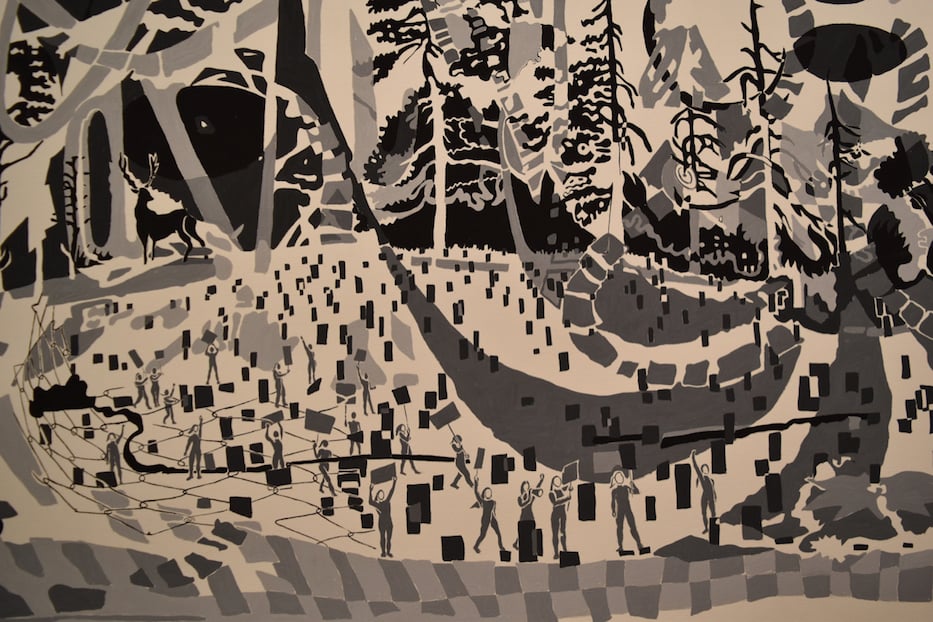 A scene of turmoil is painted in black and white. A shower of sparks flows out from the Capitol, while helicopters hover above. Protesters with fists and signs raised mingle with a roaring bear. In the midst of it all, a figure sits calmly within a circle. A seam of painted stitches runs through the figure and across the paper from top to bottom, as if holding together fractured pieces.

That scene is just one small detail in Caroline Harman’s painting Principles of Uncertainty, part of the fall exhibition Solos on view at the Ely Center of Contemporary Art. Solos is running concurrently with a second show, #WIP, through Nov. 14. Interspersed through the rooms of the Ely Center, the two exhibits flow in and out of one another, both physically and conceptually. 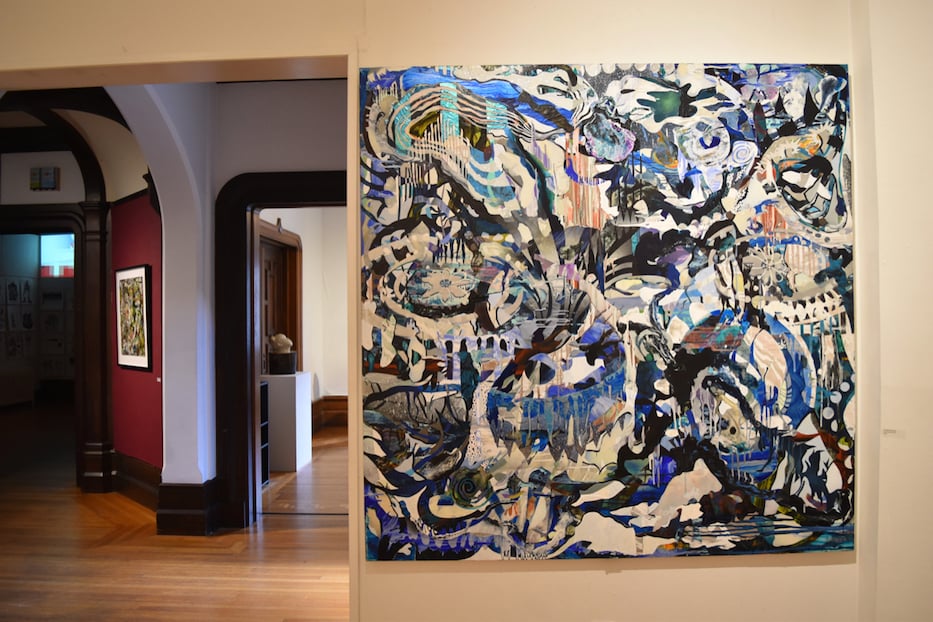 Principles of Uncertainty is painted on a single five by 34 foot strip of paper stretching across three walls, and is packed full of small, overlapping images and scenes in monochrome. Wildfires burn behind people looking at their phones in a socially distanced line. Protesters carry rectangular signs that seem to blend into a field of grey tombstones. Giant coronaviruses float among hot air balloons over snatches of a cityscape in silhouette.

Wildlife is everywhere: giraffes, lemurs, tigers, sea turtles, rhinoceroses, frogs. A condor with its wings spread across a target. A line of kangaroos hopping away from a landscape on fire. Harman bounds the frame with borders on the left and right painted to appear like quarantine tape.

There is no one focal point; everything is tucked into the spaces in between. Or perhaps it is up to each viewer to stand before the piece and find their own focal points, to notice the figures and scenes that draw their attention over others, and to discover the details that only become apparent after closer study. 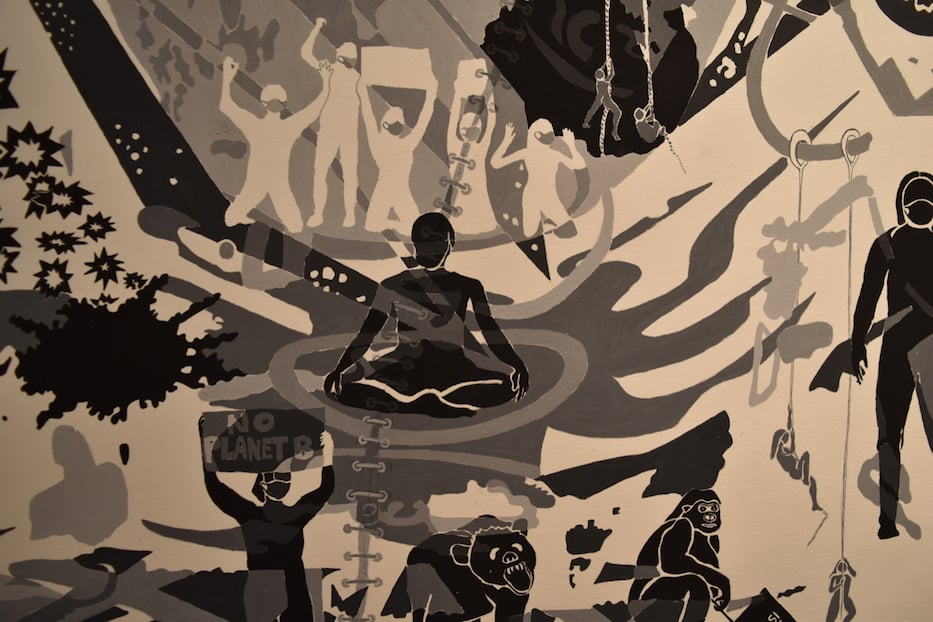 What look like grey splotches are often actually figures: the head and shoulders of a firefighter, a redwood tree stretching up and out of frame, a diagram of an atom, curving lines that look like graphs of wavelengths.

But other forms are less clear. Could this be an elephant’s trunk? Could that be a face in the trees? Could those be the windows of a plane? Is that the moon? Is this a train tunnel? Are those letters? Do they spell out a word?

Where pieces of different forms or shapes cross, a new shade is used, so that each shape appears to be both in front of and behind the other. A black fish swims through a white hazard sign and the segments where they intersect are painted in a third shade of grey. A giraffe’s black-on-white spotted pattern reverses to white-on-black as the curving arc of a spiral crosses over it. 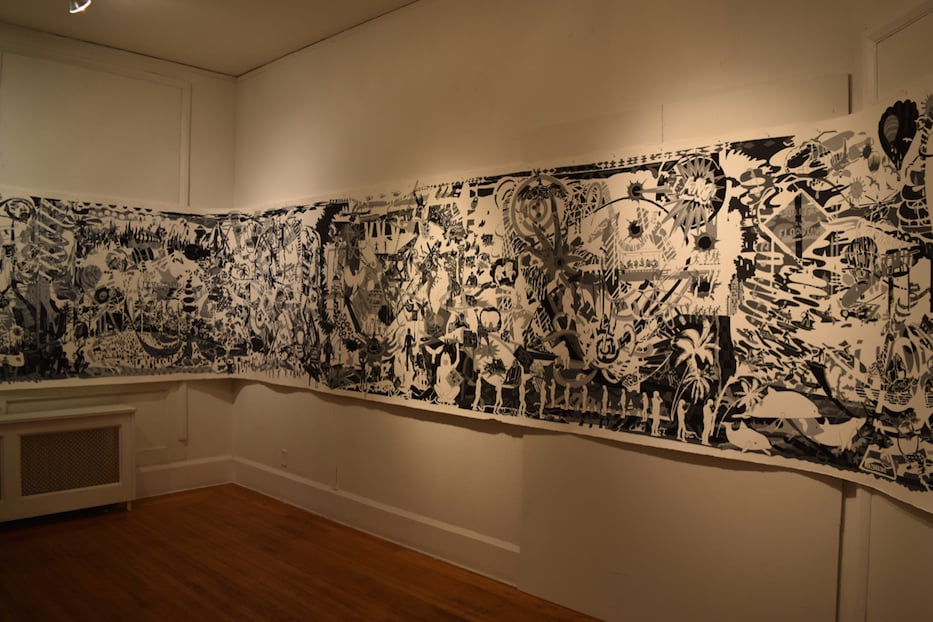 The colors are limited to white, black, and four shades of grey in between. But those controlled shades produce something loose and wild, full of form and shape, rich in energy and movement. And yet the monochrome colors make it clear: this is all connected.

“I make paintings using geometry and color to weave a tapestry of truth about the struggle for survival, the necessity of adaptability and the deep connection and interdependence of every living thing on the planet,” Harman writes in an artist’s statement. “I have always had a deep interest in complex systems that teeter on the edge of chaos, but symmetry has always been the endgame. Lately, however, my paintings are less ordered and stable, tilting toward a tipping point that feels more imminent with each passing day.” 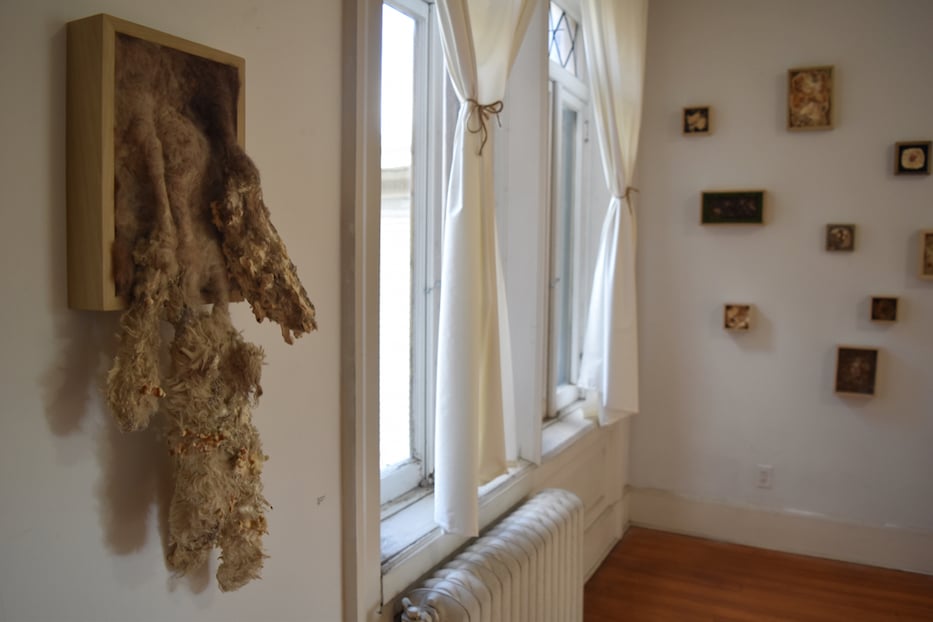 Installation view of Matthew Dercole's work at the Ely Center.

Upstairs, in another of the Ely Center’s small rooms, Matthew Dercole’s remnant 3 and remnant 18 are wild in a different way.

In these pieces, wooden boxes serve as containers to hold mostly organic matter—wool, swatches of fabric, bits of rubber, and mycelium, the part of fungus that often lives underground and sometimes produces mushrooms—all housed together in abstract compositions that suggest other forms. A sea of wool surrounds an island hilltop populated by fungus. A mycelium raft floats on wispy clouds of white wool and gauzy fabric. There is movement captured in the mycelium, as if it had oozed and then hardened. One piece grows up and out of its box, spilling over the sides.

In remnant 3, thick ropes of fiber emerge out of a sea of combed wool, ending in grizzled clumps interlaced with fungus and faux fur. The clumps that seem to grow out of the frame are scraggly and reminiscent of a sheep’s wool before it is sheared. Logic says that those pieces should be the starting point, the raw material that eventually becomes the fluffy, uniform combed wool that fills the frame. And yet, remnant 3 suggests the reverse, emphasizing a cycle of growth, life, and death followed by decomposition and transformation. 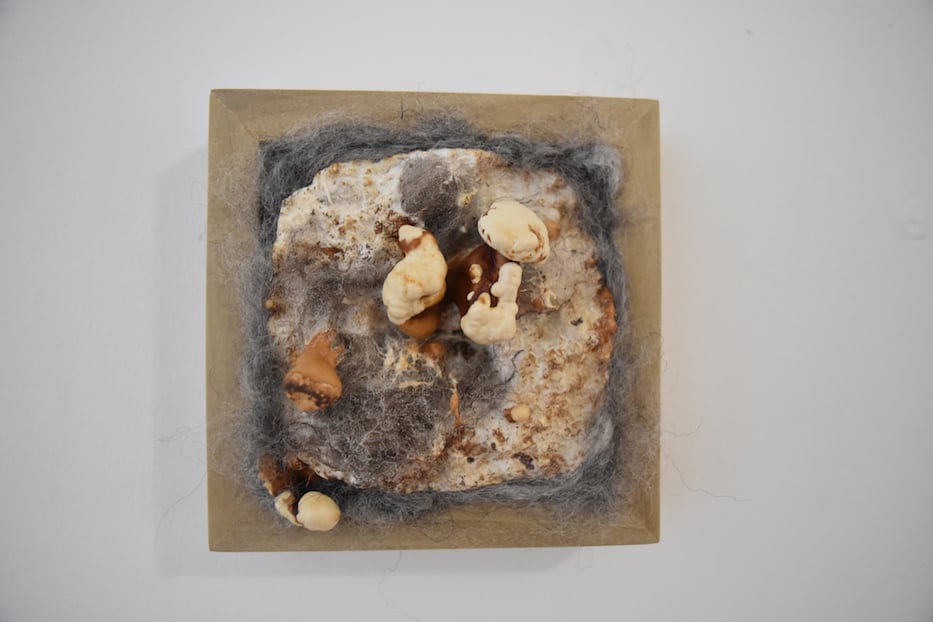 Detail of Matthew Dercole's work at the Ely Center.

Dercole’s remnants are intricate and layered, with many smaller forms combining to make one whole. Its colors range from cream to sepia to grey-brown, like an earth tone monochrome. In person, inches away, there is something soft about these particular pieces that doesn’t translate into photographs. The fibers of the wool are fine and wispy. The fungus is solid, but smooth and curving.

The earthy, under-worldly aspect of these two remnants pieces creates a connection with nature and all of its cycles. But there is also a visceral eeriness that can veer into discomfort. That quality is hinted at in remnants 18 with a ring of mycelium curled up like a nest around a detailed polymer sculpture of a knot of segmented worms, and pushed much further in remnants pieces not included in this show and in Dercole’s work as a whole.

In conversation with Harman’s Principles of Uncertainty, remnants 3 and remnants 18 tell the viewer that the little universes captured inside of their wooden boxes are also the world. The dark, secret, mysterious underside of the world. The part that keeps working unseen, despite the chaos outside and above. 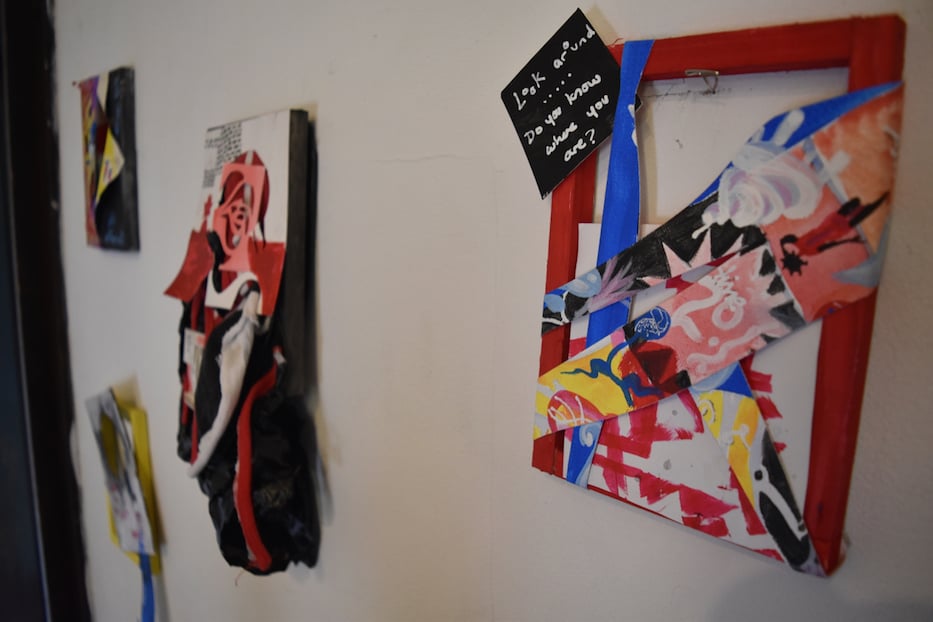 Amira Brown,Passing Thru (red) and Where You Are. Both works are from this year.

Just down the hall, Amira Brown’s paintings and mixed media collages lined the stairway and upstairs landing, following the contours of the dark, wooden banister.

Brown’s collages are like small sculptures, popping out of their frames entirely. In Everlovin’ (Nihilism) pieces of canvas are snipped and peeled back, bringing the bare wall into view. In Where You Are… and So Smooth (Blue), paper and lengths of string are wrapped and woven around the frame. In Passing Thru (Red) and Rose Tinted Window, the frames are almost completely obscured by pieces black plastic bags draped like fabric.

With this series of collages, it’s not just a matter of “inside” or “outside” the frame, but around and through, between and beside, under and over. As a container, the frames are completely irrelevant, and at the same time a frame is the foundational structure supporting every piece. It’s as if Brown is using the frame solely for the purpose of going outside of it. The frame is not a boundary, but a foil.

Brown layers materials and use positive and negative space in a way that is reminiscent of Harman’s overlapping shapes and forms. Passing Thru (Red) incorporates an abstracted painting on paper, what could be a streetscape in red, white, and grey. A silhouette appears from shapes that have been cut from the paper: a profile of a person with long eyelashes, bare shoulders and arms. 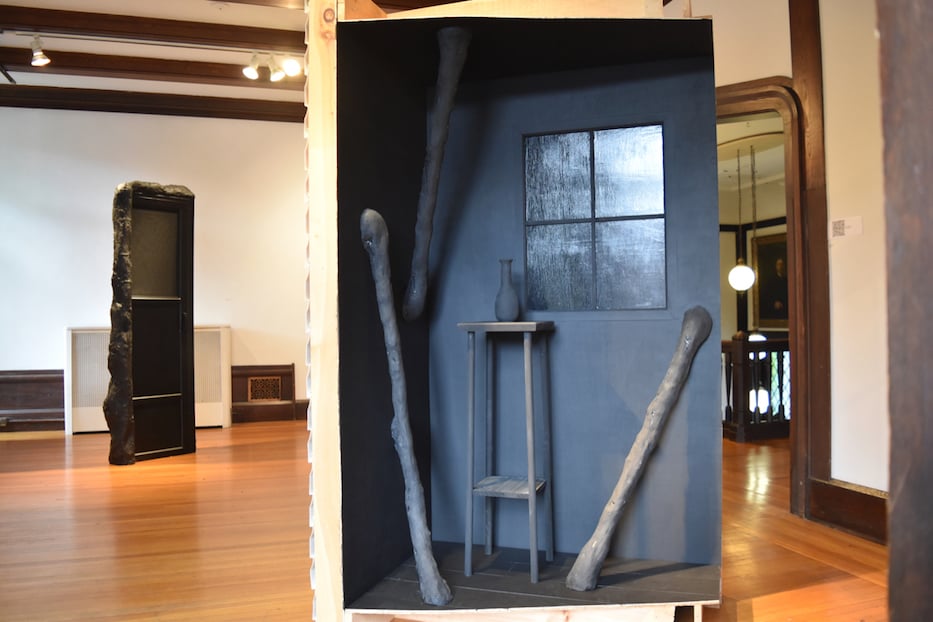 In Gateway (Pink Arch), the titular pink arch is layered between a bright blue background and a red grid that evokes apartment windows. A figure painted on the side arch also appears to be passing through it, perhaps holding a flashlight.

Brown writes in an artist’s statement that these layers are a way of exploring a complex and fluid concept of what it means to be Black, using the “liminal minutiae of daily life” and the “Black imaginative lens” to do so. This, too, is the world. The internal, emotional world that sits at the intersection of the personal and political, refusing to be contained inside a frame.

In nearly every corner of the Ely Center’s winding hallways and rooms, artists were picking up the same threads as Harman, Dercole and Brown, and deepening the conversation. 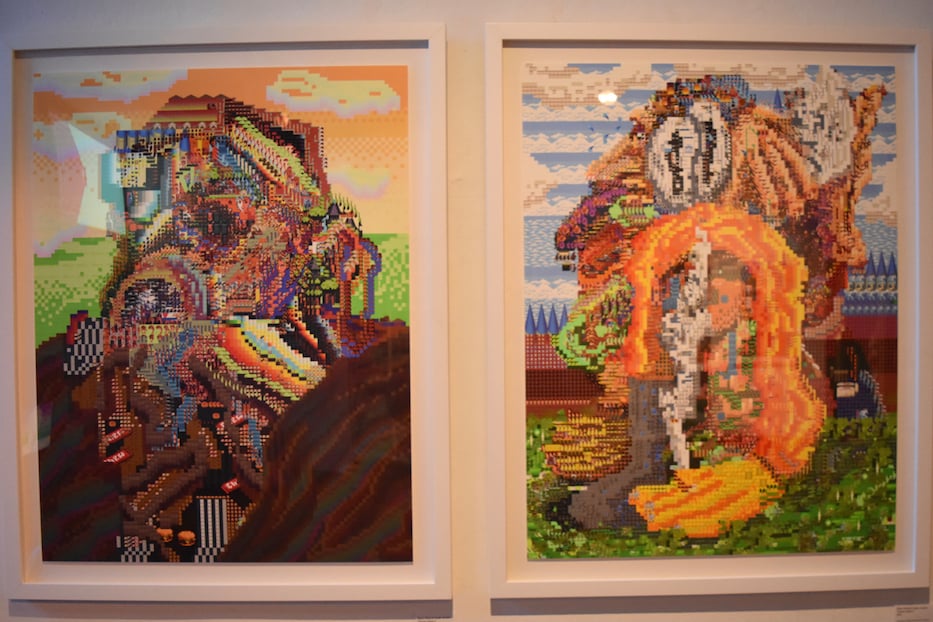 From afar, Tileset Head 4 by New Haven artist collective FEED seems to outline the contours of a profile: nose, chin, forehead, neck. But viewed at close range, the profile gets harder to see, not easier, creating an off-kilter effect.

Small, unexpected images appear: ice cream bars, pizzas, unicorns, astronauts. And thousands of tiny squares, some a single, solid color and others serving as frames within a frame, bounding images or patterns of their own: faces, letters, giraffe spots, rippling water.

The obscured and overlapping images “compose figural portraits which the viewer never fully experiences,” FEED explains in an artists’ statement. 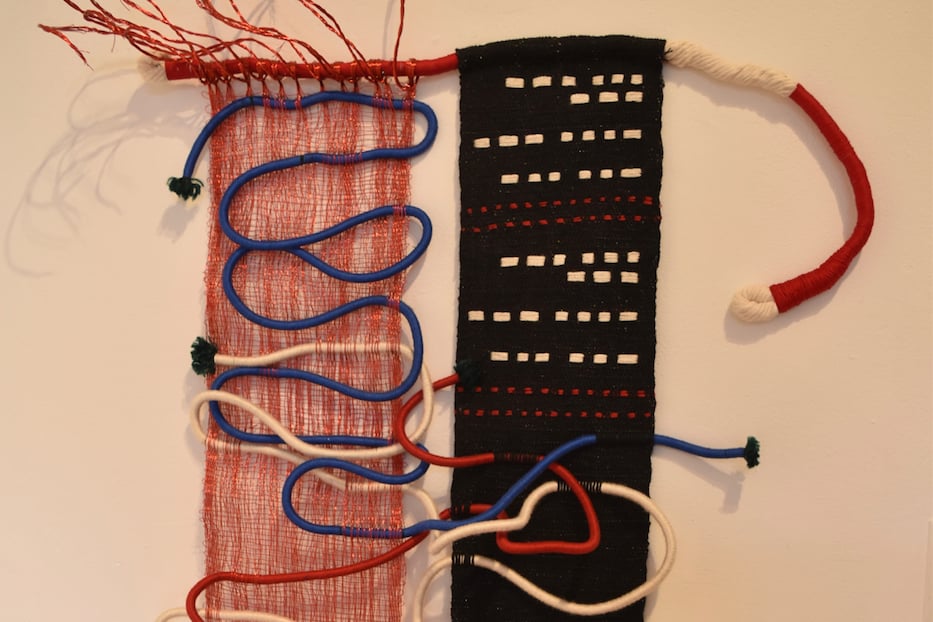 Kathie Halfin’s sculptural tapestry Svo-bo-dy!_#1 combines seemingly disparate styles as Halfin “utilizes textile as a code” to explore language, history, and resistance. On the right side of the textile, morse code dots and dashes stand out in white and red against a black background, the weave tight and regular. On the left, shimmering red fibers join together in a loose and flowing weave. Chunky cords weave their way in and out of this red fabric, looping and turning.

Inevitably, it seems, the free-flowing cords on the left make their way into the ordered weave of the right, somehow making both sides seem more at home.

“These pieces vibrate on the edge of abstraction and realism, chaos and order, life and death,” Harman writes in her statement. But her words feel like they could apply to both of these shows as a whole.

“Every day I fight against the feeling of powerlessness, and enter the studio with the hope of creating something so alive with truth and terrible beauty that it forces the world to wake up,” she writes. 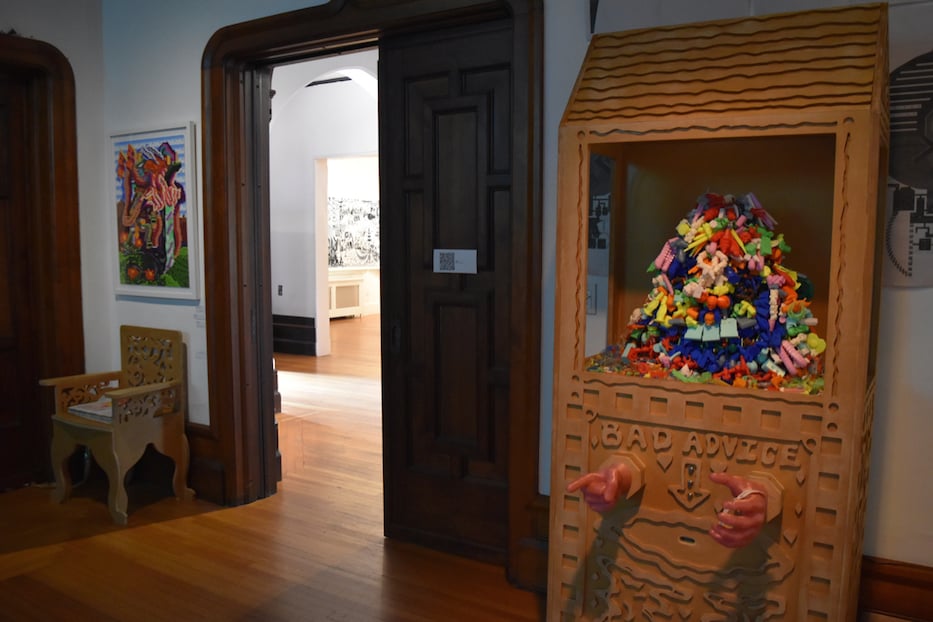 Principles of Uncertainty is filled with dozens and dozens of human figures engaging in all kinds of activity: running, resting, struggling, waiting. One thing they do over and over again is climb towards the top. They sit on mountaintops, walk tightropes, and leap up in dance. They scale ladders and ropes.

Several climb to the summit of a giant safety pin and reach back to help others join them. Others climb an abstract form that looks like a spine, finding hand and foot holds between the vertebrae. They climb again and again towards the top of the composition, sometimes reaching up as if trying to look beyond the edge of the paper.

Then, the flood begins. As the waters rise, people surf and paddle the wild waves beneath falling raindrops and a sign that reads “Subject to Flooding.” But soon the flood washes away broken houses. People reach up with both hands, their heads just barely above water. As the waters tumble down to the bottom of the page, several figures seem to try to keep swimming with nowhere to go.

The last human figure in the painting is draped head-to-toe in protective gear, spraying pesticide from a canister on their back. For the last two or three feet of the painting there are woodpeckers and hummingbirds, trees and flowers. Spiders crawl along and dangle from curling and winding threads of silk laid out parallel like musical staves. There are no people at all.

But along the quarantine-tape border, a tenacious dandelion thrives next to a sign that reads caution. An owl perches on a circle, a symbol of wisdom and vision. And one pale, hopeful butterfly floats just outside of the quarantine tape, escaping the frame.

Solos and #WIP  are both on view at the Ely Center of Contemporary Art, 51 Trumbull St, New Haven, through Nov. 14. For hours and more information, visit their website.