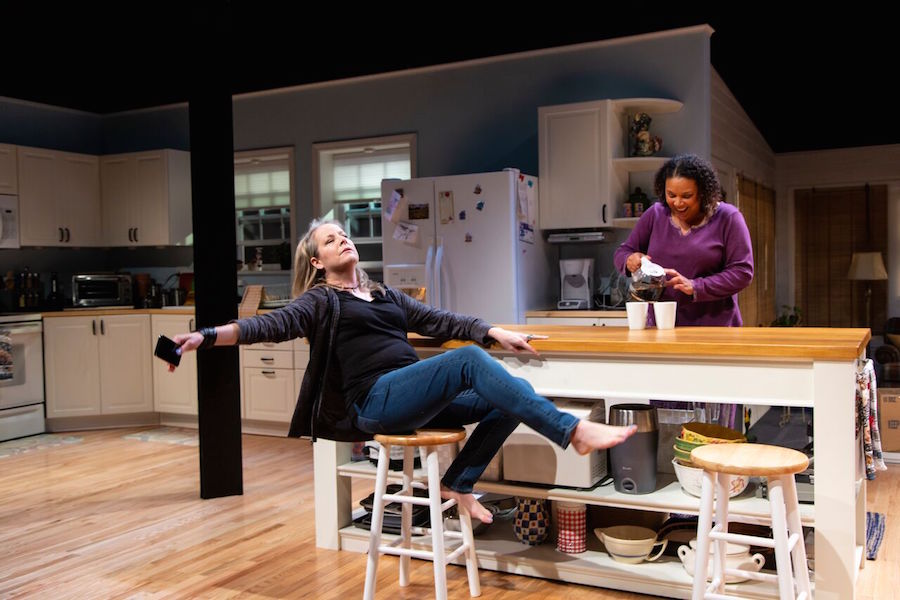 Sharon, limbs extended in all directions, sprawls on a kitchen floor. She’s just taken a few drags from her edgy new roommate’s joint and is wondering if she’s feeling high when it hits her. It may look familiar: her first time smoking, unsure exactly of what to do. “I should have been in a band!” she declares.

But Sharon isn’t a college freshman. She’s a 54-year-old divorcé with an adult son.

Sharon is half of The Roommate, playing at Long Wharf Theatre now through Nov. 4. It is the first full-length show of Long Wharf’s 2018-19 season, which began last month with the theater’s fourth annual New Works Festival. For tickets and more information, click here.

Written by Jen Silverman and directed by her longtime collaborator Mike Donahue, the play is, on its face, a show about two empty-nester women with estranged children. But it’s really a show about how a relationship with someone completely different can propel us out of stagnation.

Despite her age, Sharon (Linda Powell) is experiencing lonely stasis. Her son has moved away to Brooklyn, and her husband has retired from their marriage without telling her. She barely leaves her cozy home in Iowa City, except for book club and a Thursday shift as a gift shop cashier. Mostly, she spends her time worrying about her son, whose life she doesn’t understand. (“His girlfriend’s a lesbian,” Sharon says bewilderedly.) Without the label “mother,” what does she have?

Enter Robyn (Tasha Lawrence), who’s just moved to Iowa from New York. She’s guarded when Sharon asks about her past, only revealing that she’s been a potter and a slam poet. When on the first evening at home she asks Sharon to lock the doors, she says that “I feel better with things locked,” and we get the sense she’s talking about more than home security. Lawrence finds power in restraint and manages a performance that’s initially aloof without ever seeming disengaged.

Soon, at Sharon’s good-natured prodding, the two women realize they have more in common than they—or we—initially believed. Both are mid-fifties divorcés with distant adult children. Robyn’s move to Iowa is the first step in forging a new life. Sharon realizes that she craves action as well.

During one of the many voicemails Sharon leaves for her son, she laments that her mother always said to her “don’t.” But she’s captivated by the fact that “Robyn is someone who says ‘do.’ And then she does.”

With Robyn’s help, Sharon finds a way to do—eventually. For a play about becoming unstuck, the first half is stuck repeating the same bold big-city versus sheltered suburbia jokes. Robyn is from the Bronx, but Sharon can’t imagine living in such a “dangerous” place. Robyn says that she’s gay, and Sharon nervously and exaggeratedly declares her support for “homosexuals.” Robyn grows marijuana, but Sharon initially thinks that they’re just nice house plants.

It’s not until the halfway-mark that the play picks up steam. Sharon discovers the real reason Robyn moved to Iowa. Intrigued by the life Robyn used to lead, Sharon convinces her roommate to return to it and bring her along. At this point, the play throttles forward as Sharon becomes obsessed with the thrill of Robyn’s past life.

Donahue marks this major shift with a clever redecoration of the set by the actors in a fun montage sequence. Sharon’s sunny kitchen becomes a playful den of sin: cabinets brim with dirty money, designer shopping bags line the floor, and a silver plate of bongs crowns the refrigerator. We’re not in Kansas anymore. (Because we’re in Iowa, which the show reminds us multiple times.)

To a lesser degree, the second half of the play falls into the same rut as the first. Robyn and Sharon play out the same dynamic over and over. Except this time, the problem is not Sharon’s naivety but her willingness to court danger. Time and time again, Robyn tries to pull her back from the edge. It may have been refreshing if, like her own characters, Silverman had have broken with some of her own patterns. But the excitement of Sharon’s newfound bad girl alter-ego and Powell’s radiant performance overpower the repetitive plot.

The production is also buoyed by spot-on design. The set, designed by Dane Laffrey, is slice-of-life American realism at its finest. The airy blue kitchen and utilitarian sunroom could have been carved-out out of any Arts and Crafts home. Anita Yavich’s costumes are similarly dead-on. Though evocative, they never turn the actors into caricatures.

It’s easy to forget that the show is designed at all. The realism foregrounds the actors’ brilliant performances. Powell pulls off a believable transformation from an “invisible” homebody to a swaggering hustler, all while staying sincere.

One of Powell’s finest moments as an actor, and one of the most delightful of the play, is Sharon’s silent, slam-poetry performance to her empty kitchen. Hunting for details about Robyn’s past in some never unpacked boxes, Sharon finds an olive cargo jacket and black beanie. Cautiously, she puts them on and grabs a cigarette, imitating Robyn.

She takes a deep breath, about to speak into an invisible microphone. But, by her own admission, she’s not a poet and can’t find the words. Instead she elaborately pantomimes a spoken word performance complete with snaps for herself at the end.

It’s a kind of dress-up, a way to try on Robyn’s past for herself. It’s also absolutely hilarious.

At its best, The Roommate finds humor and playfulness in the unexpected stagnation of empty nest syndrome. It seems that growing old is a kind of growing up.