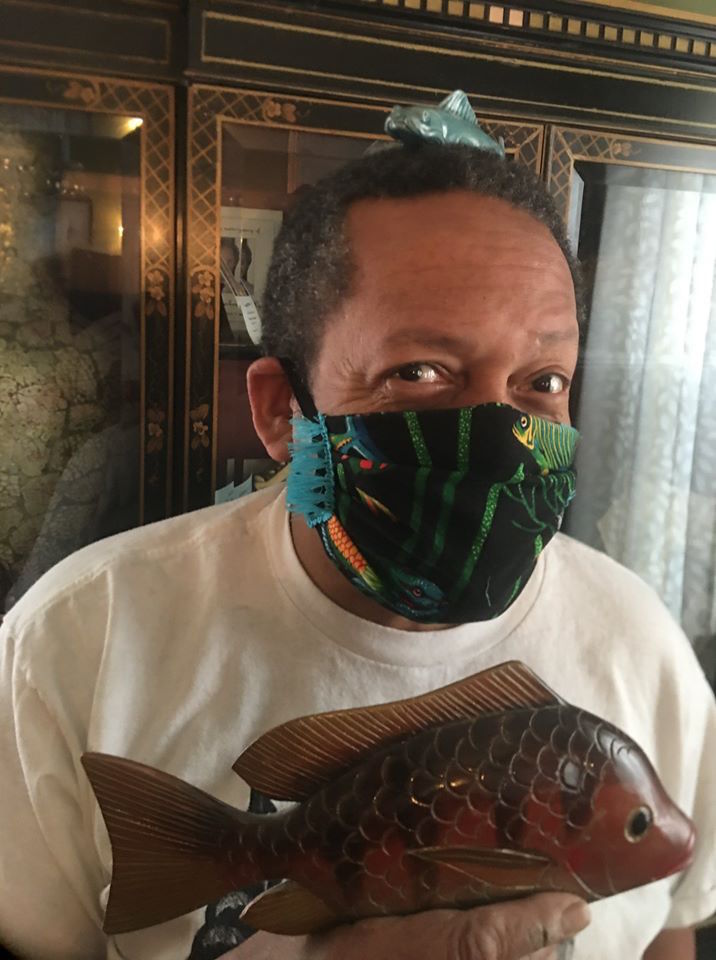 When coronavirus hit New Haven, Todd Lyon knew she needed to make a plan. Then she looked around her, and saw fabric. Oceans and oceans of fabric.

Lyon is the owner of Fashionista Vintage & Variety, a vintage shop that she runs with fellow New Havener Nancy Shea. As the shop’s doors reopen slowly during the COVID-19 pandemic, she has continued making masks as a way to keep the business afloat—and give back to the community she calls home.

For every one mask that she sells, she donates two to the Mary Wade Home in the city’s Fair Haven neighborhood. Mary Wade declined to comment for this article, but has posted its gratitude for hand-sewn masks to social media several times in the last four months.

“Mask-making in this time of crisis has made me feel so much closer to my city and my neighbors,” she said in an email. “Even though we were self-isolating, it felt like walls came down and we all became part of the same team. Proud to be an East Rocker, proud to be a townie!”

Lyon closed the doors to Fashionista in early March, after Connecticut Gov. Ned Lamont ordered all nonessential businesses shut down immediately. By March 22 she had started the mask-making process. Quickly, she put her own spin on it: she uses vintage fabric to make the masks, with designs that range from black and white stripes to fabric with bright tropical birds to old, neon plaid. She has been using a CDC-approved design, with multiple pleats for increased safety.

The process took off almost immediately. Lyon can make five or six masks in an hour, and has churned out over 450 in the past 17 weeks. She has also enlisted the help of friends and fellow sewists Hayward Gatling (pictured above) and Candace Klein.

Early clients included not only paying customers and “friends in need” to whom Lyon donated masks, but also Mayor Justin Elicker and his wife Natalie. She has been tickled to see some of her masks make it onto the news, as Elicker has worn them to press conferences (she has posted screenshots of a few such examples to her social media profile).

She continued to make them as the store opened an Etsy shop—a digital age first, she said—and then cautiously reopened its doors earlier this month. It has done so with a large sale, including on vintage wedding dresses and wacky vintage odds and ends.

As she worked, she heard about the toll that the pandemic was taking on assisted living facilities, nursing homes and senior centers. Of New Haven’s nursing homes, she chose the Mary Wade home because she has long respected their work. Lyon said that she chose Mary Wade because she felt that it was “in the shadows of our major medical institutions.”

“Armies of home sewists were making masks for YNHH while Mary Wade, which is a family-owned, non-profit nursing facility in the heart of Fair Haven, was left in ‘dire need’ — their words,” she said. “Unfortunately, since then they have had devastating losses.”

While the sales are largely concentrated in New Haven, she said she has also made several international sales. She is hoping that the sales can both help the home get through the ongoing toll of COVID-19 and help her keep the lights on.

Lyon also said the future for Fashionista remains “murky.” While she and Shea applied for federal relief earlier this year, the shop did not receive as much as Lyon had hoped. The physical space was closed through July 10, resulting in a loss of income on both purchases and clothing rentals that the store offers. When the store reopened, however, it did so with fanfare and excitement.

"Put on your galoshes and slosh on down," Lyon wrote on social media. "No hugging or kissing, but we'll pinch your cheeks with gloved hands and squeal with delight. We've missed you all so much!"

This piece comes to the Arts Paper through the third annual Youth Arts Journalism Initiative (YAJI), a program of the Arts Council of Greater New Haven. This year, YAJI has gone virtual. Read more about the program here or by checking out the"YAJI" tag.