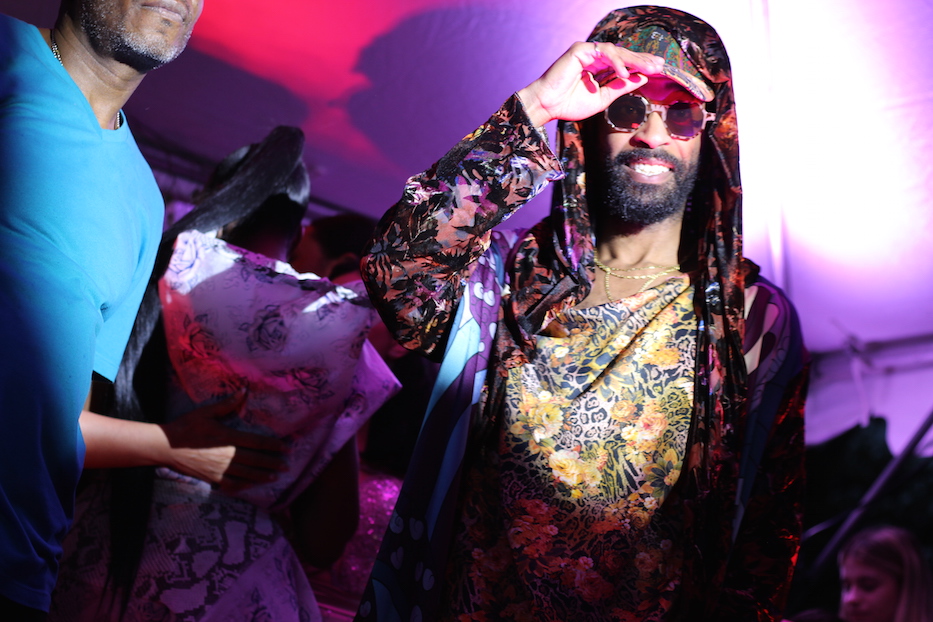 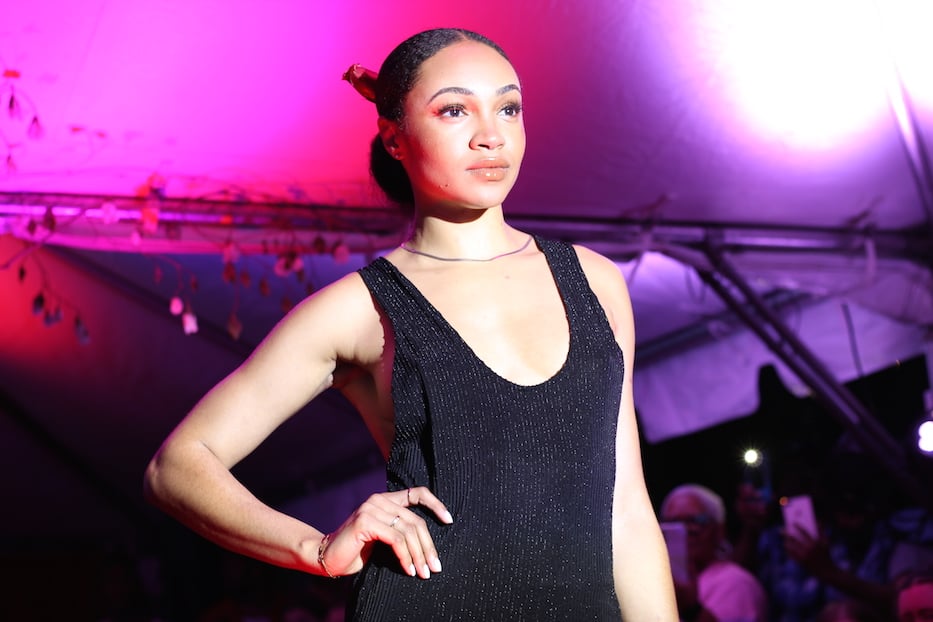 A model stepped out from behind the curtain in a short sleeved black, reflective garment. The neckline dropped down in a half oval shape. The thick straps were twisted down to the attached part of the dress. A slit stretched from the upper knee, lined with a silver, shimmering edge. The model walked down the red carpet, smiling.

The announcer asked her to do a spin, and she obliged. The crowd clapped, laughed and cheered.

That was one of the designs at Westville's reborn fashion show, part of the neighborhood’s celebration as the 25th annual ArtWalk rolled, sang, and played into town last month. As part of the festival, five designers brought their work into the center of Westville Village for over 300 pairs of eyes.

Three years into a pandemic, it showed a neighborhood’s cultural, explosively creative footprint one design at a time. 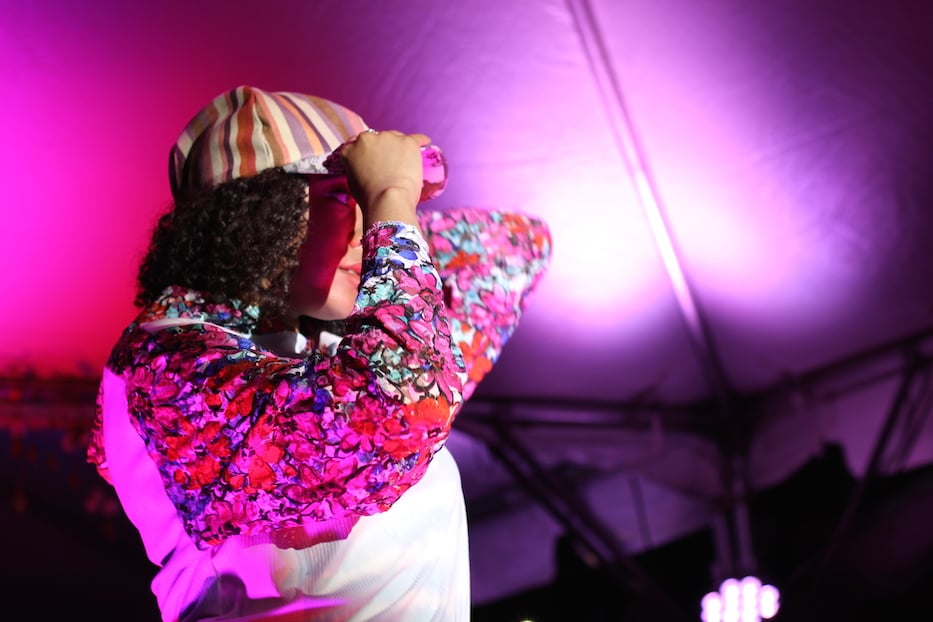 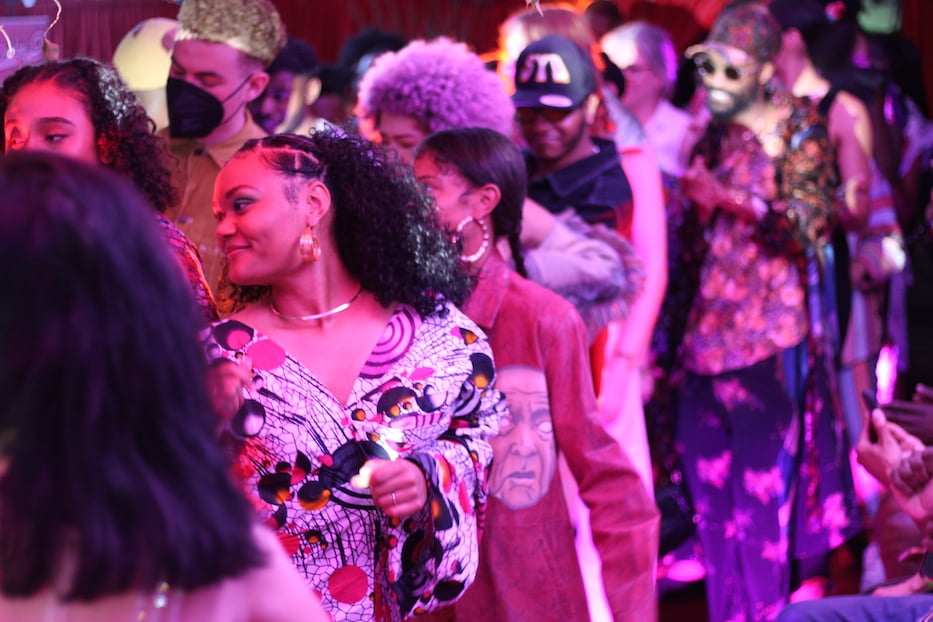 The fashion show was the brainchild of Hanscom, who also helped arrange a smaller version at ArtWalk 2019. Hanscom and her husband, Luke, own Lotta Studio, and she has been helping create fashion shows for six years now. She said she can’t remember her life before it.

Before the event, models and designers gathered inside Lotta Studio, sporting looks that ranged from billowing white wedding gowns to street wear. Gradually, they morphed from regular passers-by to New Haven fashion icons, wearing bright printed patterns and dresses that swept the floor. 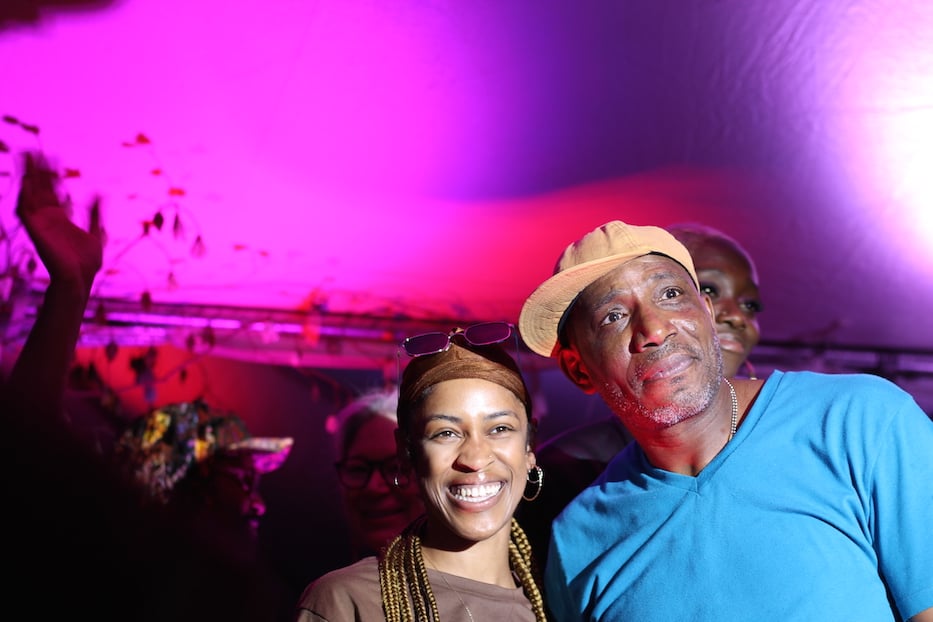 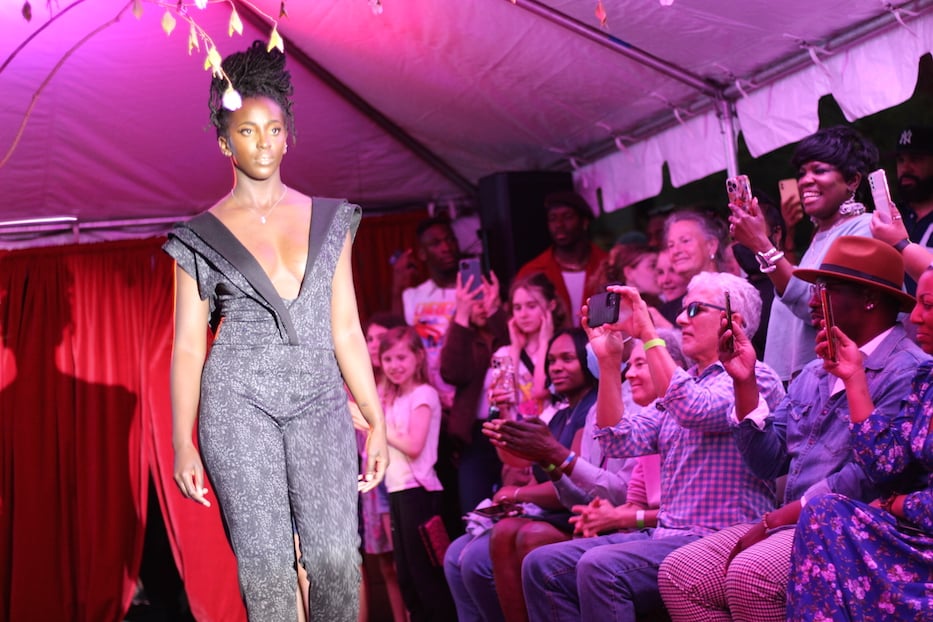 On a plush, velvety green couch, they chatted with each other and took photos. Tubes of lipstick, round cakes of concealer, and open containers of eye shadow sprawled out on a large table. When it was time to hit the runway, models left Lotta and walked down Whalley Avenue, gliding past Alisa’s House of Salsa.

Outside, a large crowd of people gathered around white tents and a red carpet. Underneath the tents, some attendees bought tickets to sample local beers. Others took group salsa lessons from Alisa Bowens, herself a brewer and owner of Alisa’s House of Salsa down the street.

A woman danced with fire batons as attendees trickled in and waited for the show. A booming beat set the tone for the vibrant outfits to come. 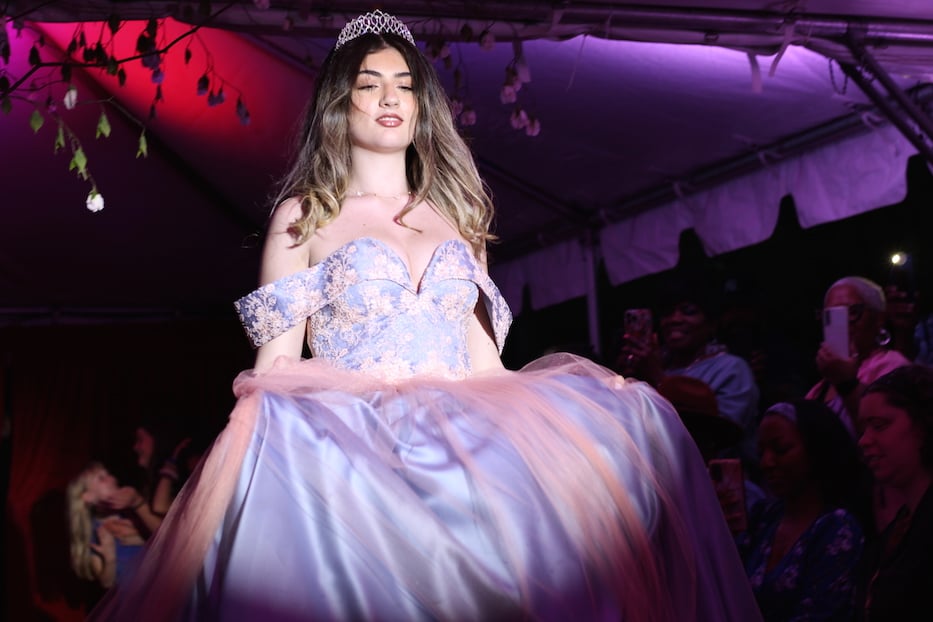 The crowd didn’t have to wait long. Moments into the show, a model walked out in a tulle, white wedding dress that Madhi had designed. The dress had a slit down the front of the chest and beaded embroidery on both sides. The sleeves were also made of a couple layers of tulle and were dropped over her shoulders.The dress was accompanied by a jeweled tiara.

Mahdi is a designer who came to the U.S. a refugee from Iraq in 2014. During the show, she wore an emerald green jumpsuit with sequins sewn very close to each other. As she waited for models, she said her goal is to incorporate American and Iraqi fashion into both cultures. That has become a reality with her own studio and business, based in her home in Hamden.

“When I buy the house I see the basement I tell them this is my dream,” she said. “I buy a house and then I open my own business.” 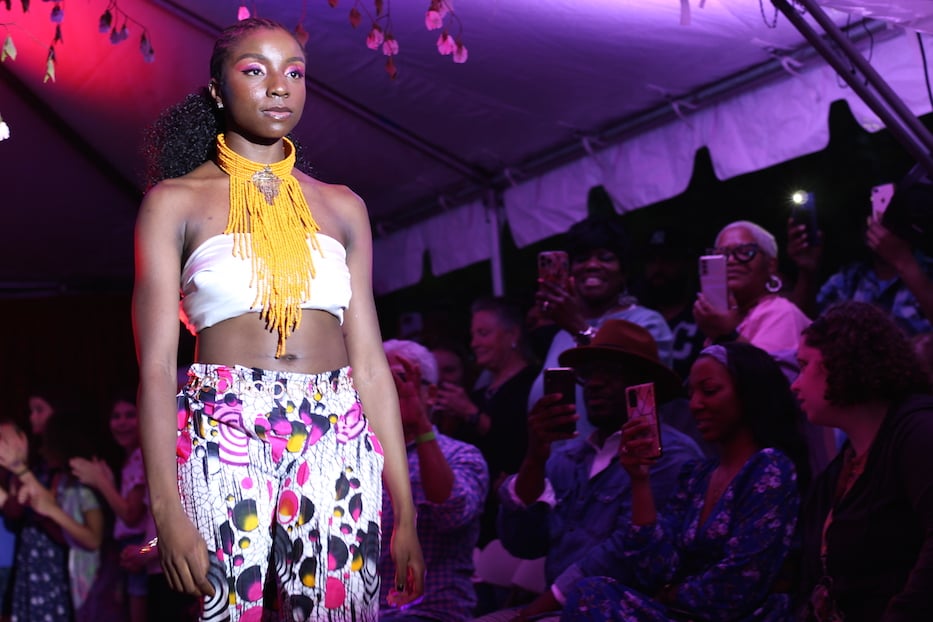 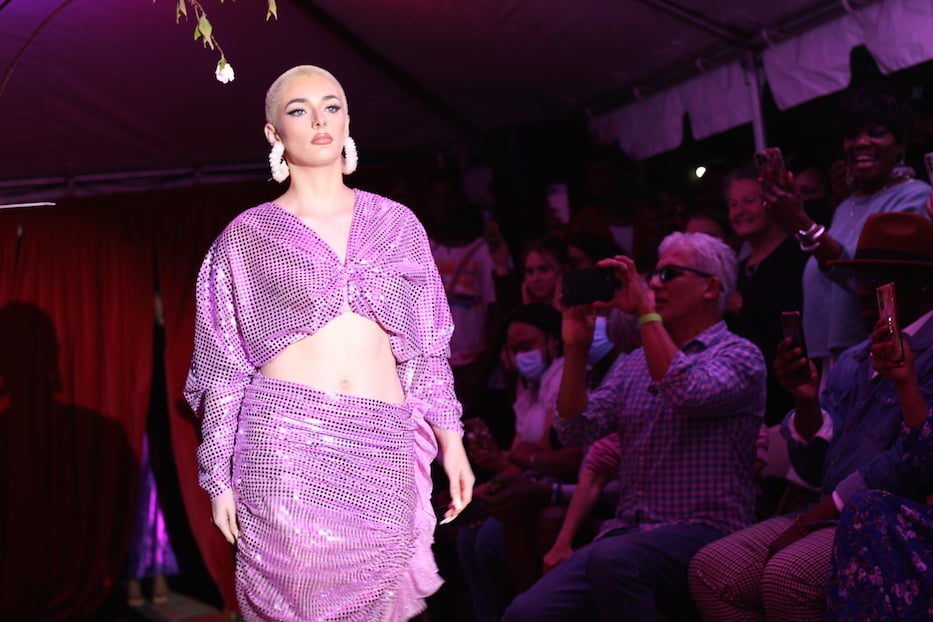 Sarah Ngongi dazzled with a varied style. Each piece made a different statement yet all her pieces had an empowering sense to them, as if they were lifting up the models as they walked. Some of her models wore sequined dresses, others in dynamic and colorful fabrics. One model had on a black polka dotted mesh iridescent shirt with a bright yellow bra underneath.

Ngongi is a model and designer who has been sewing for roughly seven years, and now runs the brand Avec Dieu (in French, the name translates to “With God.” She posts and sells her designs on Depop, a web-based platform that fashion designers often use to launch their businesses.

Her outfits, she said, are inspired by her emotions. As she watched the show—an array of her own bright, sparkly pieces—she sported a red, leather corset that she had dreamed up. 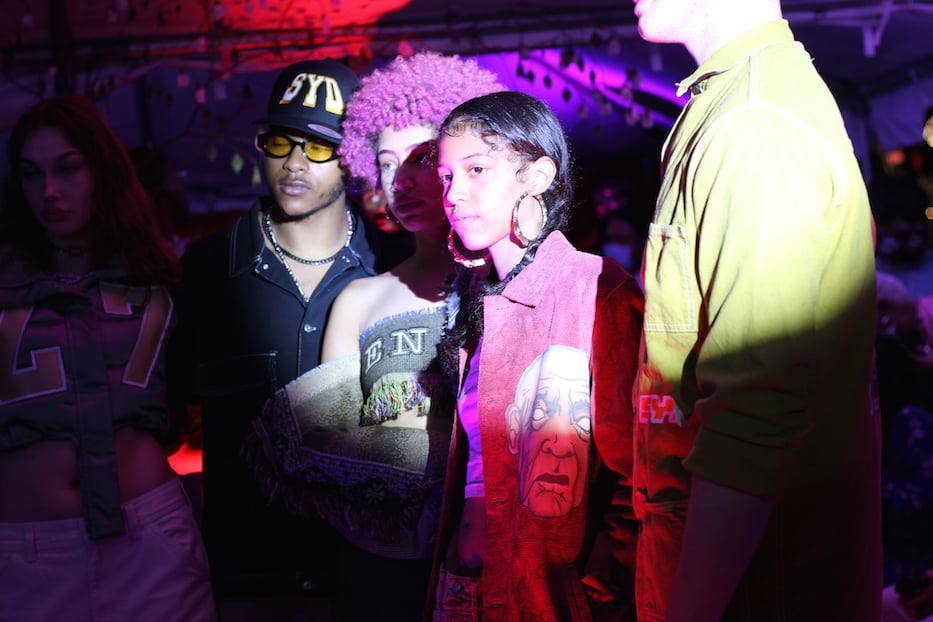 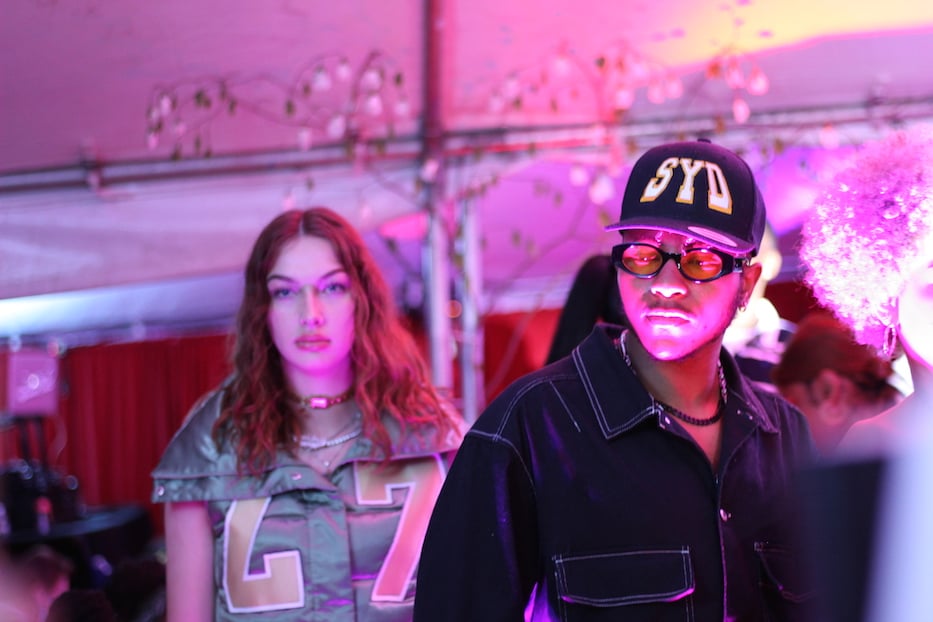 As models showing off Sydney Bell’s work took the stage, their outfits included pieces with fringe edging, sports jackets and jeans. One of her models wore a black jean jacket festooned with basketballs and the words Syd University, the name of the brand she founded in 2019, and grew during the first year of the pandemic in 2020. The designs, which are each hand crafted and carefully sewn, are based on HBCU fashion.

Bell said she also gets inspiration from Pinterest, where she will look up old advertisements (cigarettes for instance, she said) and see how the models are dressed.

The nod to HBCUs isn’t purely happenstance. Bell has always been very interested in education, including her own, she said. When she founded Syd University, she was a 20-year-old college student at Southern Connecticut State University (SCSU). The brand is an homage to her own goals, emblazoned with her name.

As they took the red carpet, Bell’s models wore sports jackets, along with caps and her brand’s name was proudly displayed on the clothes. She likes to do “graphic textile.” 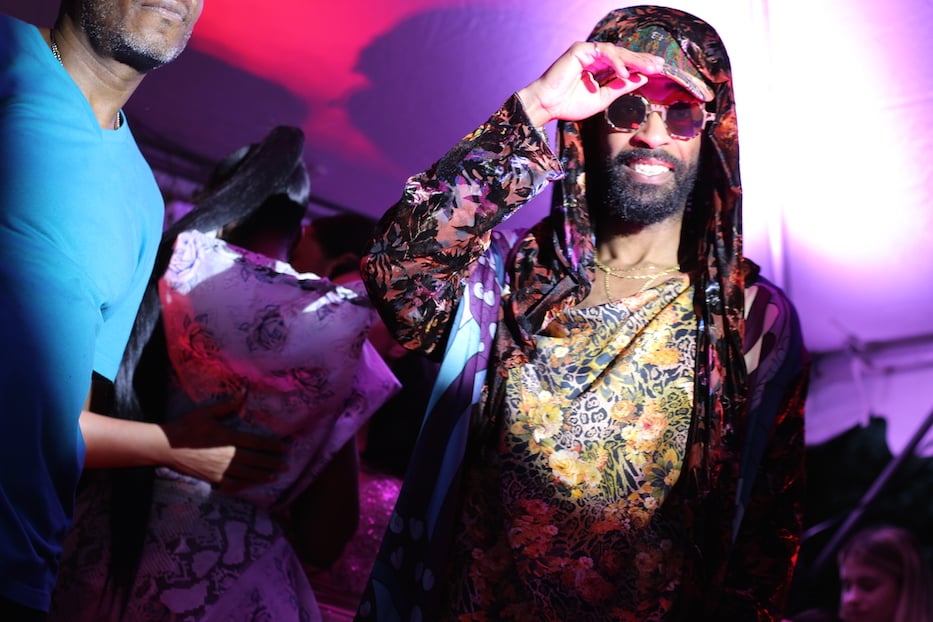 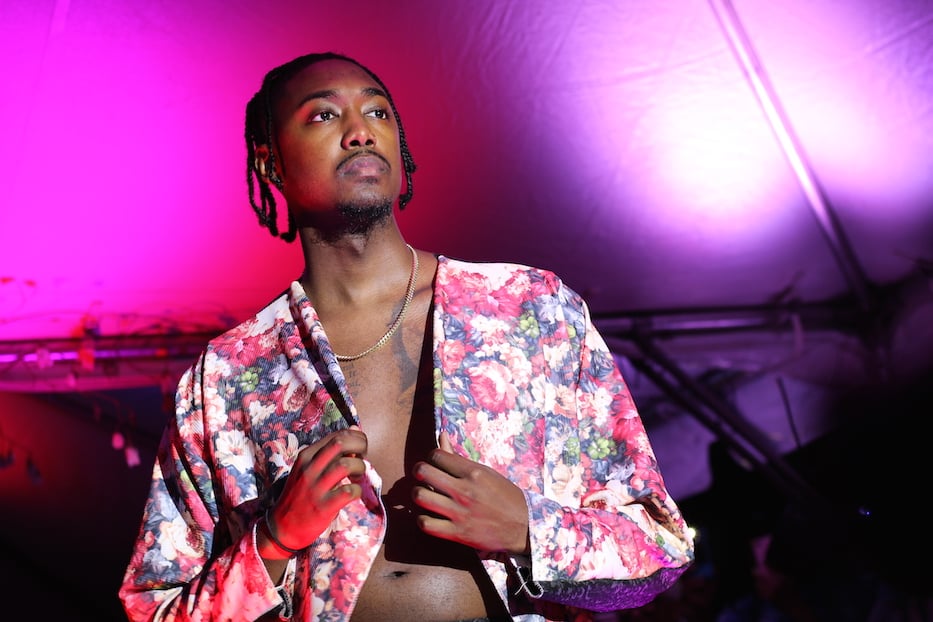 While she and others built up their brand—Murrell is the brain behind Black Goat Milk Clothiers, and Gonzales helms Vintanthromodern—designers like Montgomery leaned toward “wearable art.” The owner of Threads By Tea, Montgomery started out making clothes years ago to satisfy his own sartorial tastes. He uses different fabrics with fun patterns that provide comfort, and are high quality.

He loves to incorporate bright colored and patterned fabric into his clothes, he said. One model walked down the carpet in a floral printed suit. The suit had half the back covered in a black fabric, along with different color on the sleeves. Another design was a dress that doubled as a cloak. This design was stylish yet advantageous, it appeared.

The crowd cheered as another model took the runway. The designers were leading the charge, piece by piece.

This piece comes to the Arts Paper through the fifth annual Youth Arts Journalism Initiative (YAJI), a program of the Arts Council of Greater New Haven. Read more about the program here or by checking out the "YAJI" tag. Lily Sutton is a sophomore at the Sound School.