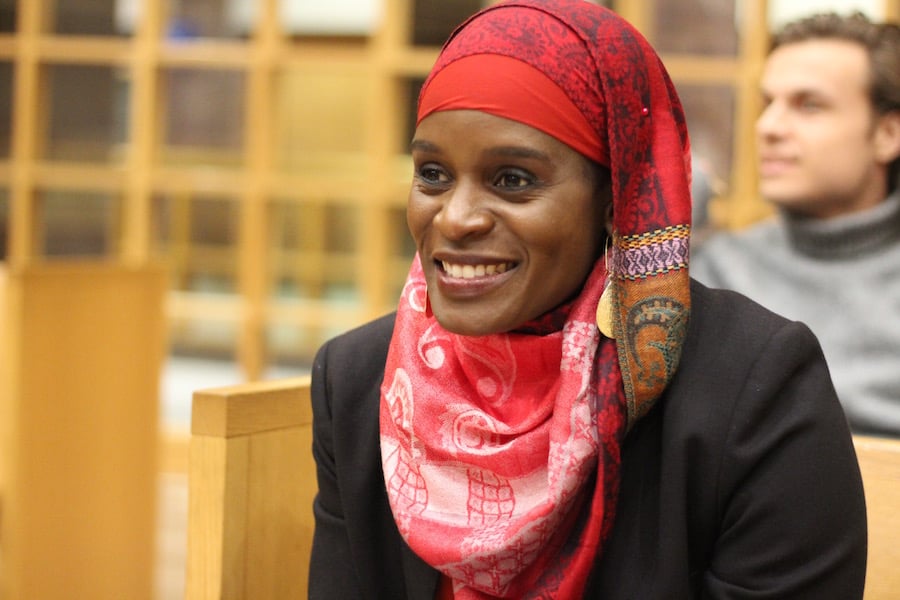 Changing state regulations, required ordinance jargon, and concerns from the city’s Health Department all delayed a business owner’s quest to change the city’s food laws Tuesday night. That means that the city’s smallest food businesses will have to wait until next year for a final decision on lower operating costs.

The business owner behind the proposed ordinance is Mubarakah Ibrahim, founder and chief executive officer of Mmm Pies & Gourmet Desserts. Her “micro-business” ordinance proposes to reduce fees and regulations for food entrepreneurs who rent a just a section of an existing commercial kitchen.

In September, she submitted a draft of the ordinance to city Legislative Services Director Albert Lucas, waiting for it to be assigned to committee. Earlier this month, she received word that it would be open for a public hearing with the Board of Alders’ Legislation Committee. On Tuesday, the hearing lasted for just over an hour, remaining open due to outstanding concerns from the committee’s alders. 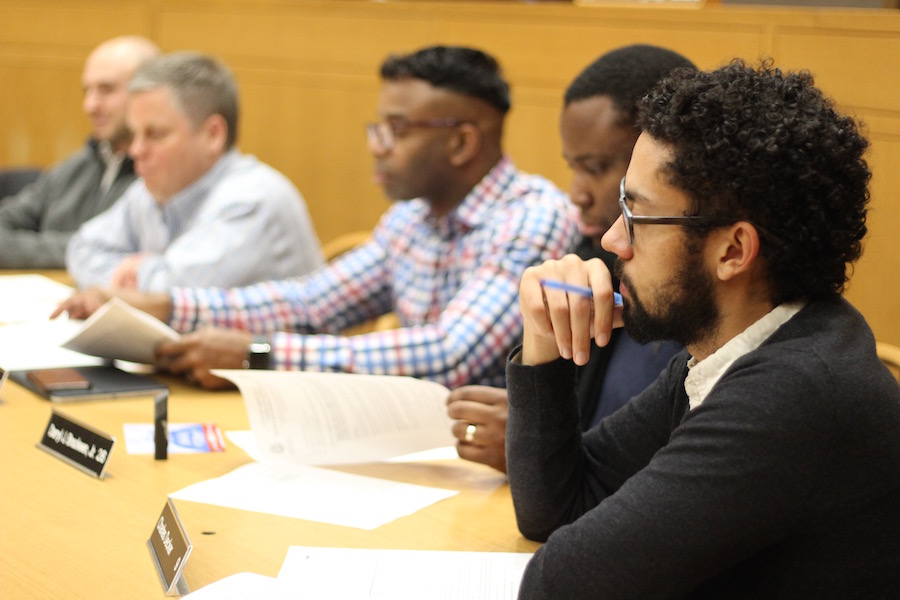 Alders listened intently to a build of public support for Ibrahim, who has grown Mmm Pies from a small-batch business to an operation distributing to local food retailers and pie-starved customers across the city. Testifying before the board, Ibrahim recounted her frustration with city policies when she began her business while renting space at a Whitney Avenue kitchen and bakery last year.

As she began to grow her business, she discovered a system that had no efficient or pro-rated way to handle micro operations like hers, which rented out a small amount of space for a few hours a week, didn’t bring in major new equipment, and grossed less than $250,000 a year.

Instead, she found that she was charged the same for certification as the kitchens and establishments in which she was situated—even if she used less square footage. 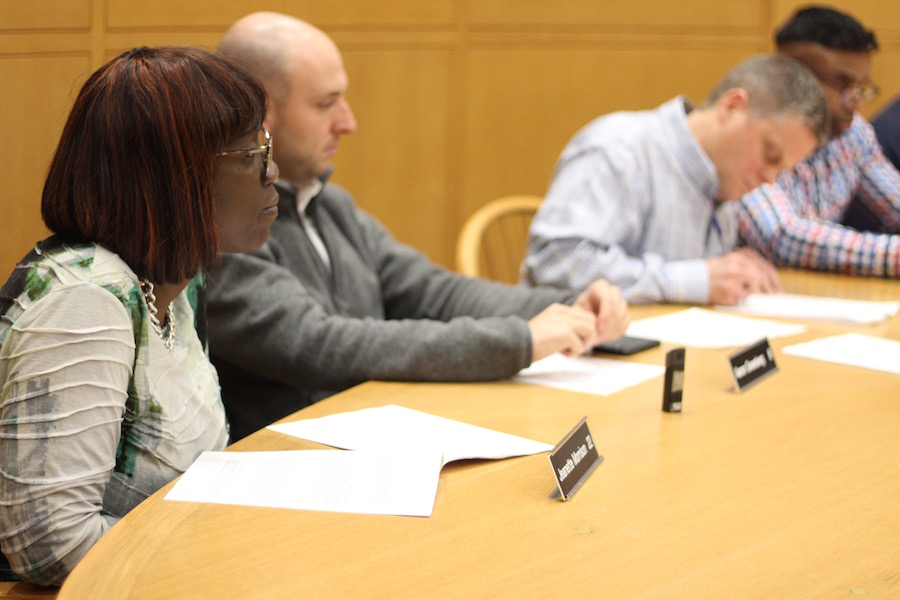 She described a process that she saw as rife with redundancy. Despite the fact that the Whitney Avenue bakery had been certified just months earlier, she still had to go to the Health Department for a form, and get separate sign offs from the Fire Marshal’s Office, Zoning Department, Regional Water Authority, and Building Department. Then she had to have the Health Department inspect the space.

Then, she found that she was paying a fee of $275 effectively twice in one calendar year, because the city’s fee schedule only had one billing date, and it was just months after she’d first started (read more about that here).

At Tuesday night’s hearing, she painted the current model as an economic barrier for many New Haveners, including “low-income residents, people of color, and those that are traditionally cut off from access to funding.” She described the proposal as also fitting in with New Haven’s Economic Transformation Plan, which city officials rolled out in 2016. Under the new ordinance, she argued, a pro-rated fee schedule would open business opportunities to more people.

“I think that giving entrepreneurs the ability to start small opens a world of opportunity,” she said. “This ordinance allows the city to achieve this goal [of the Transformation Plan], but also reduces the use of city resources by removing the redundancy of inspections and … operational costs associated with this current process.” 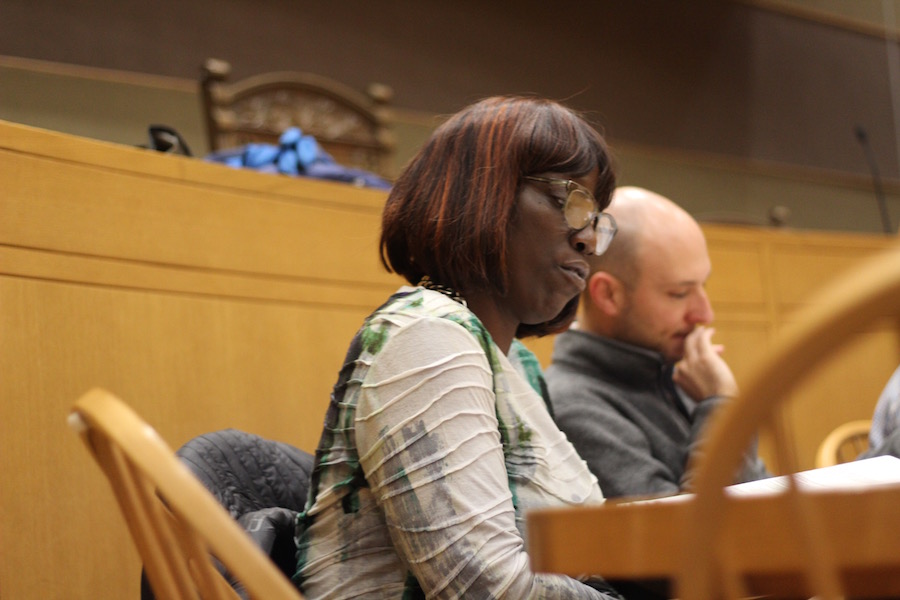 A few alders followed up with questions, largely related to the amount of equipment that a micro-business owner would be permitted to install in a space that they are renting out. But when Ibrahim explained that she would not be bringing in so much as an extra stand mixer (the ordinance requires that business owners “Do not install any major equipment.” and “Do not make any structural changes to the facility”), committee members seemed satisfied.

“What will protect businesses that aren’t as efficient as you are?” Furlow asked in a follow up question. “What if there’s a restaurant, and they use another restaurant after hours … and so we need to bring in another type of equipment. And so they plug this equipment in to an older restaurant. And there’s an industrial fire now, because this place wasn’t inspected.”

“I understand that needs to be clarity on what is major equipment and what is minor equipment,” Ibrahim said. “Maybe that’s something we could put a fee structure around … or literally define it.”

City Food Systems and Policy Director Latha Swamy suggested that the ordinance has the potential to provide more revenue for the city, as an increased number of micro-businesses take advantage of new legislation, and grow their start ups in New Haven. She pointed to comparable fee structures in King County, Washington, which encompasses Seattle. 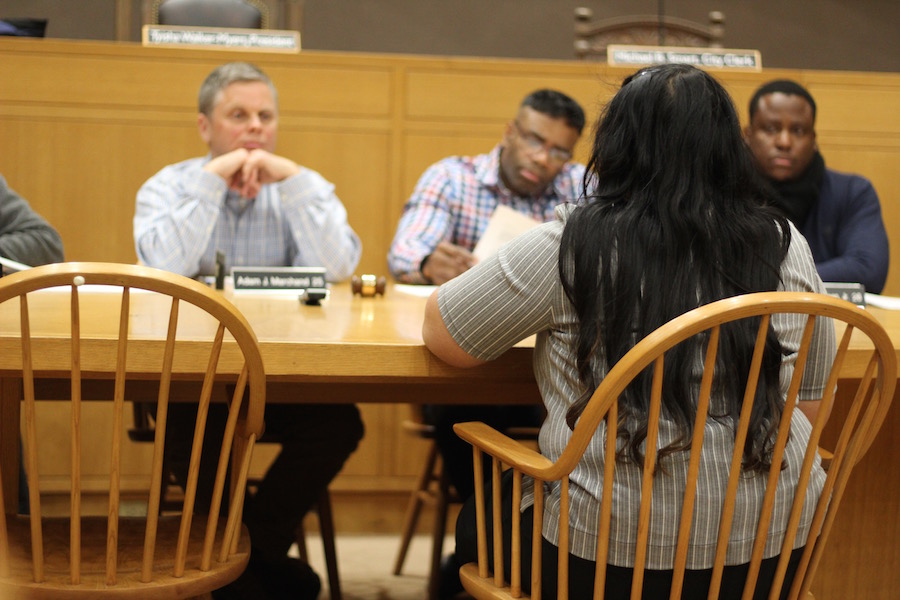 “You would actually be removing a barrier for use of these kitchen spaces by smaller businesses that are actually trying to grow and perhaps in the future establish brick-and-mortar spaces,” she said. “I think that something like this would be especially beneficial to New Haven, especially with our food economy and small food business ecosystem that’s quite burgeoning.”

While Swamy said there is no exact way of keeping track of micro-businesses, she added that there are a number of small food businesses that currently operate under the radar or in other area towns because they cannot afford the current licensing structure.

Other support for Ibrahim came from the New Haven Food Policy Council and CitySeed New Haven. Representing the Food Policy Council, Austin Bryniarski praised the proposal for supporting local economic opportunity while maintaining a real and sustained concern for public safety. He reiterated that the new ordinance, in streamlining licensing, would save both business owners and the city time and money. 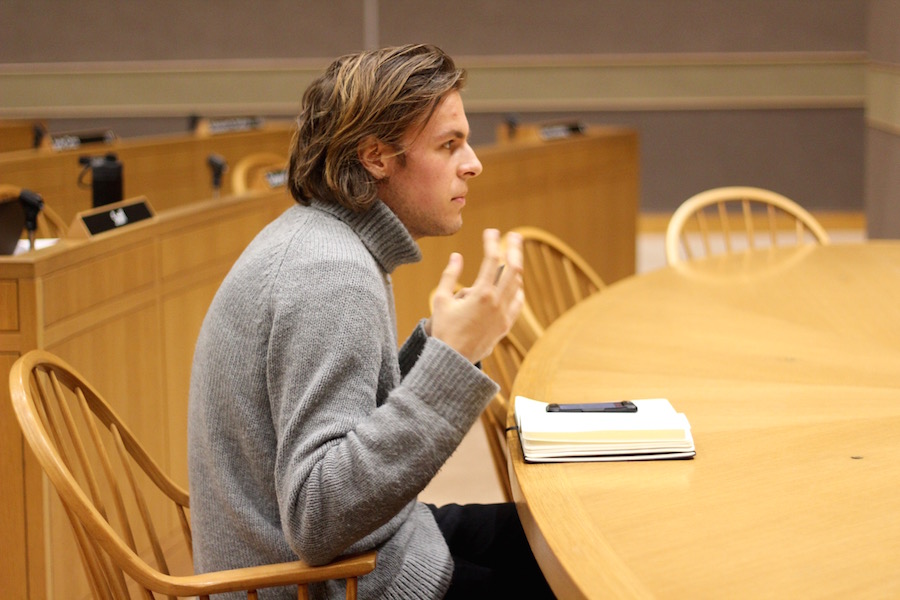 “Ms. Ibrahim’s proposal ensures that small food-based businesses will not be squeezed out because they cannot afford regulatory requirements that the city demands,” he said. “It streamlines the process for community-focused licensed kitchens to rent out their space, and increases access to economic opportunity to micro-business owners who might not be able to start up their ventures otherwise.”

From CitySeed, Director of Operations Ashley Kremser added that the ordinance creates an equitable and economic business model—one she thinks about every day at CitySeed, where the team is working through its second food business accelerator program with several immigrants, refugees and low-income residents in New Haven.

“These ventures have similar needs as Mmm Pies did as a startup,” she said. “Barriers to entry include high cost and arduous procedures associated with licensing and inspection.”

She used the industrial, fully licensed kitchen at the organization’s Grand Avenue headquarters as an example: in the past year, the organization has had four companies using the same kitchen, which warranted eight inspections (four from the Health Department and four from the Fire Marshall) and more sign offs.

“We Have To Get This Done Right” 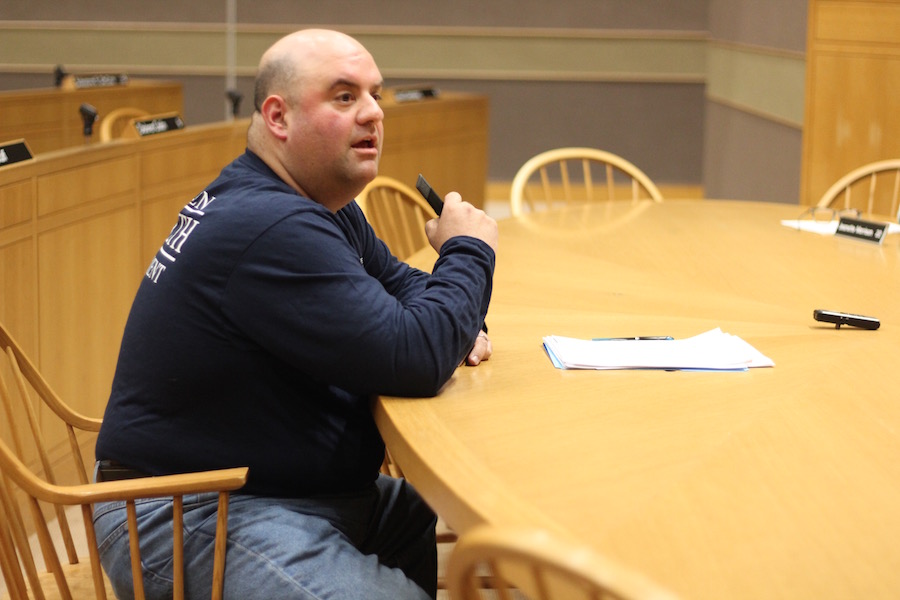 But if local nonprofits and advocacy groups stood in support of the ordinance, representatives from the city’s Health Department were more skeptical.

“With 1,100 licenses coming all at once, it could get real crazy chaotic confusion if we’re basically on different levels,” he said.

He also noted concerns with structural changes or the possible installation of major equipment, which Ibrahim has noted that the ordinance forbids (read more about that here, or read the full proposal as a PDF here.)

“One thing that I’ve learned about the city is that when things are in place and it works, they won’t touch it,” she added. She gave the example of car taxes, the payment schedule for which changed last year. “So I’m just trying to understand … we are very professional, very smart, we can figure it out. So I don’t see that truly being a barrier.” 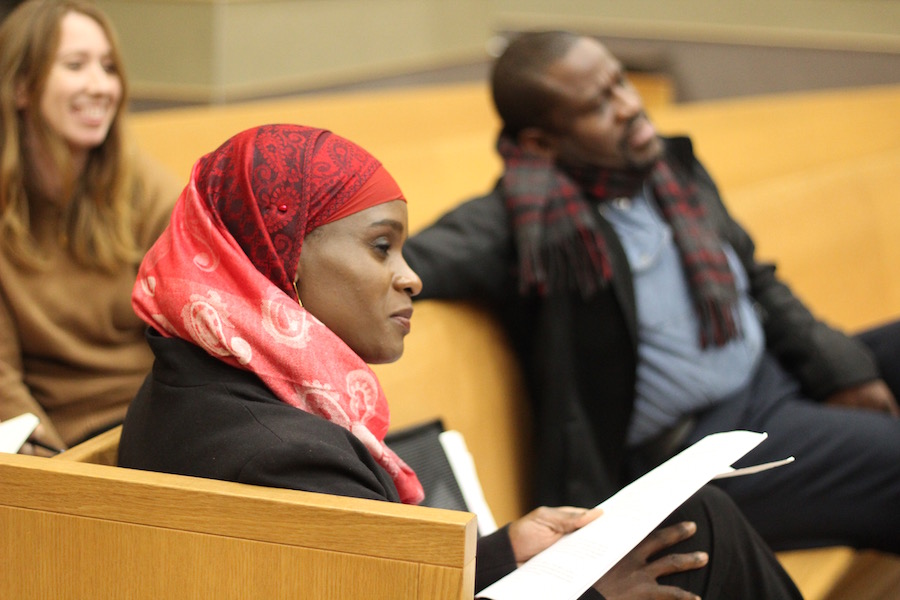 In City Hall’s second-floor lobby after the hearing, Ibrahim suggested that no one from the Health Department had in fact read the proposal. But one of Wnek’s points gave the alders pause: the fact that New Haven will be adopting the Food and Drug Administration’s (FDA) Federal Food Code on Jan. 1 of next year. Which means, Wnek had explained to the committee, the department may need to start doing inspections with a new set of state regulations in less than a month.

Marchand suggested that the committee extend the public hearing into next year, to account for the change in state food regulations. He said that committee members would be seeking legal counsel in the interim, to determine the implications of the state’s changing regulations on the ordinance. 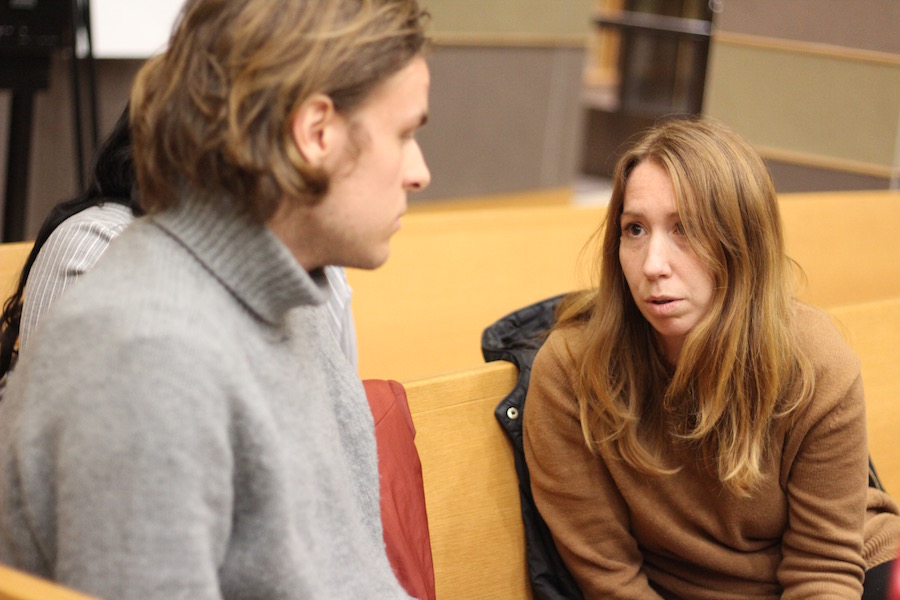 Marchand added that Ibrahim still required formal ordinance language for the proposal. Only Morrison voiced her dissent for keeping the hearing open.

“This item is not fully ripe,” Marchand said. “There’s not an actual proposal … we need to vote on that, but that’s not here.”

After the meeting, Furlow did tell Swamy, Bryniarski and Kremser (pictured above) that things looked good for the future of the ordinance. He said that he intends to vote in favor when the public hearing has concluded and the issue goes up for a vote.