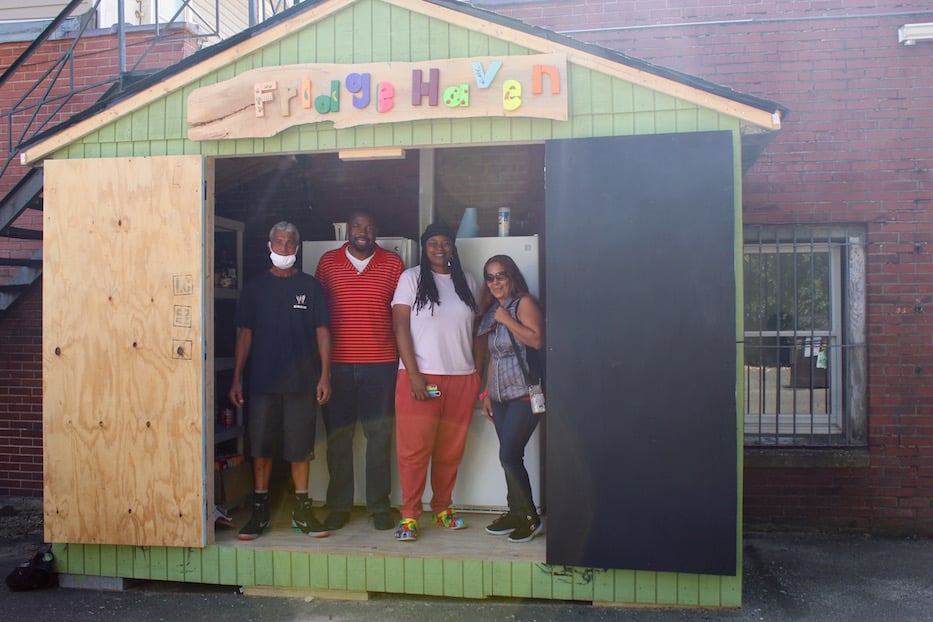 Kelly Sherman knows what it’s like to be hungry. Saturday, his walk down Dixwell Avenue brought him to a community-wide project working to fight food insecurity with fresh produce, neat shelves of canned goods, and a heaping side of mutual aid.

That’s the idea behind Fridge Haven, a new effort to combat citywide hunger with two humming, all-hours community fridges outside Varick Memorial AME Zion Church on Dixwell Avenue. Saturday, Fridge Haven organizers, Dixwell neighbors, community members and impromptu food donors gathered to launch the project with a barbecue. Between sizzling burgers and fragrant clouds of charcoal-scented smoke, they presented a vision for neighbors helping neighbors get through the second year of the pademic.

The project, which is part of a growing statewide network of community fridges, is an initiative of Black Lives Matter New Haven, the Central Connecticut Democratic Socialists of America  (DSA), and Life In My Days with guidance from Bridgeport Mutual Aid. The fridges will be open 24 hours a day, seven days a week. Community members are invited to stock the fridge if they are able to, and to take whatever they need from it if they are hungry. 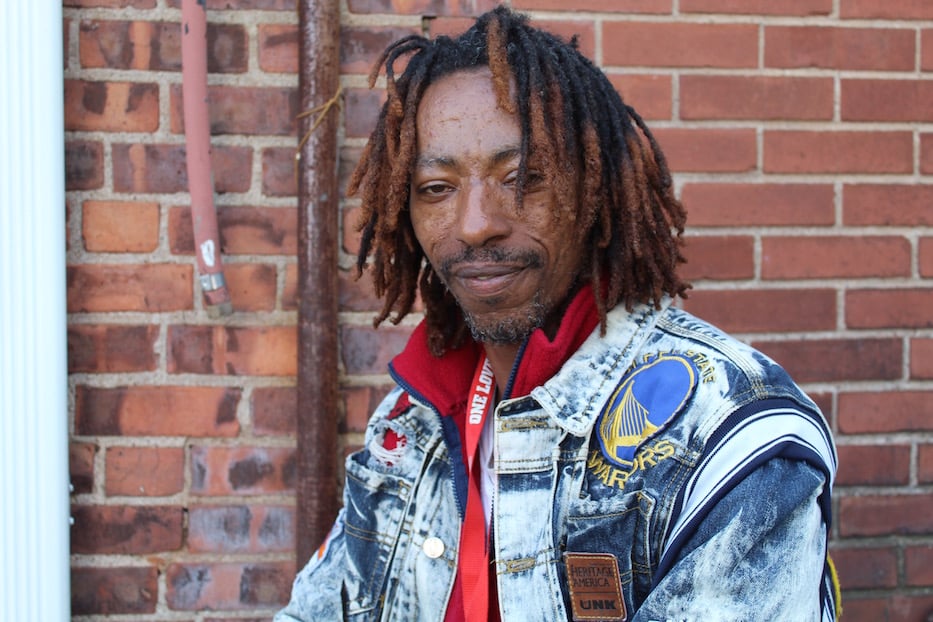 Varick, where Pastor Kelcy Steele has been working with Black Lives Matter New Haven for the last year, is providing the space and the electricity for the fridge and a surrounding shed. In addition to two fridges—one is fully vegetarian and one is not—there are shelves of canned goods, and supplies including diapers and sanitary pads. The outline of a soon-to-be mural from artist Vijor McCray adorns the painted wood slats.

“I can’t believe it’s finally open,” said MiAsia Harris, a core member of Black Lives Matter New Haven who also works as the Director of Mutual Aid for Life In My Days. “There are so many people who have lost their jobs in this pandemic and who don’t know where their next meal is coming from.”

A grassroots effort from its small, sturdy wooden shed to its rotating contents, Fridge Haven has been months in the making. Earlier this year, the idea took root in Bridgeport, as members of Bridgeport Mutual Aid scrambled to feed hungry families during the first months of the Covid-19 pandemic. Around them, unemployment was skyrocketing. They watched food insecurity rise in a city that was already struggling with hunger.

33-year-old Reggy Saint Fortcolin, who helped lead those efforts, said that the group was usually able to get grocery deliveries to 200 households per week. Then members started reading about community fridges across the country. The idea—that neighbors could both provide and take food as they needed—dovetailed with the mutual aid work that they were doing. 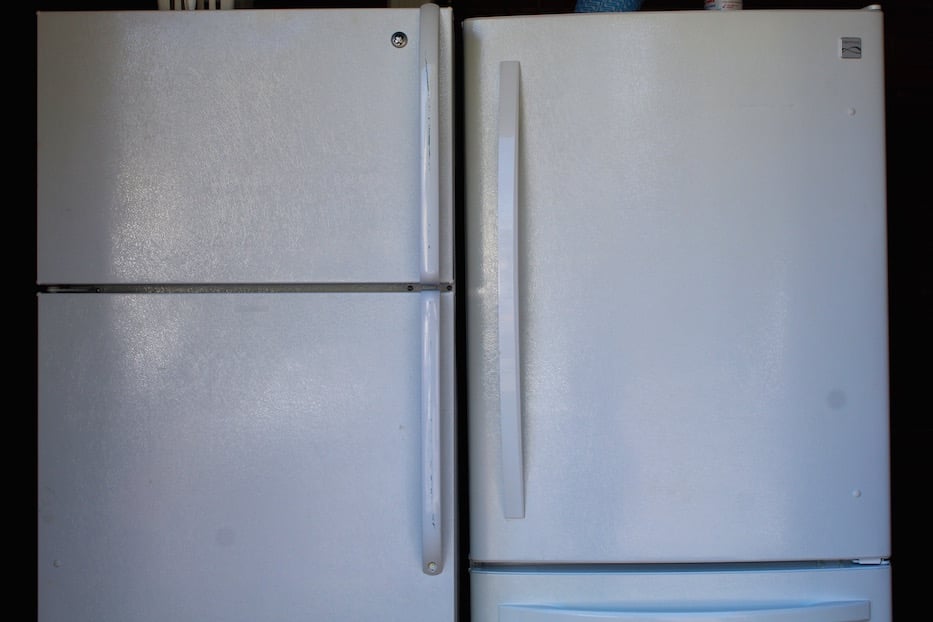 In May of this year, Bridgeport Mutual Aid opened a community fridge at Kingdom Builders Impact Ministries on Bridgeport’s James Street. The operation, which feeds between 100 and 200 people per day, is fittingly named Fridgeport. Fortcolin added that he doesn’t like to give credit to a single person or group, because the upkeep and success of the fridge ultimately belongs to the community. There is also a community fridge in Hartford, lovingly dubbed Fridgeford.

“The group of names don’t really matter, because the community leads it,” he said. “The community takes it on.”

In addition to community members who bring food—everything from produce to fresh eggs and meat—Fridge Haven has developed relationships with Atticus’ downtown bookstore and Orange Street market, Elm City Market, CitySeed weekly farmers markets, the Diaper Bank of Connecticut and Common Ground High School. Harris said that she envisions the list of collaborators growing as news of the fridge gets into neighborhoods.

In New Haven, Harris worked closely with Melanie Dworak, chair of mutual aid for Central CT DSA, to make the fridge a reality. Dworak, who lived off Dixwell Avenue for several years before moving to the city’s East Rock neighborhood, said that she’s confident that community members will step in to keep the fridge stocked. In her experience, it's just what people do.

“When we show neighbors how they can help each other, they show up and it’s empowering,” she said. “Honestly, all we’re doing is making the space.” 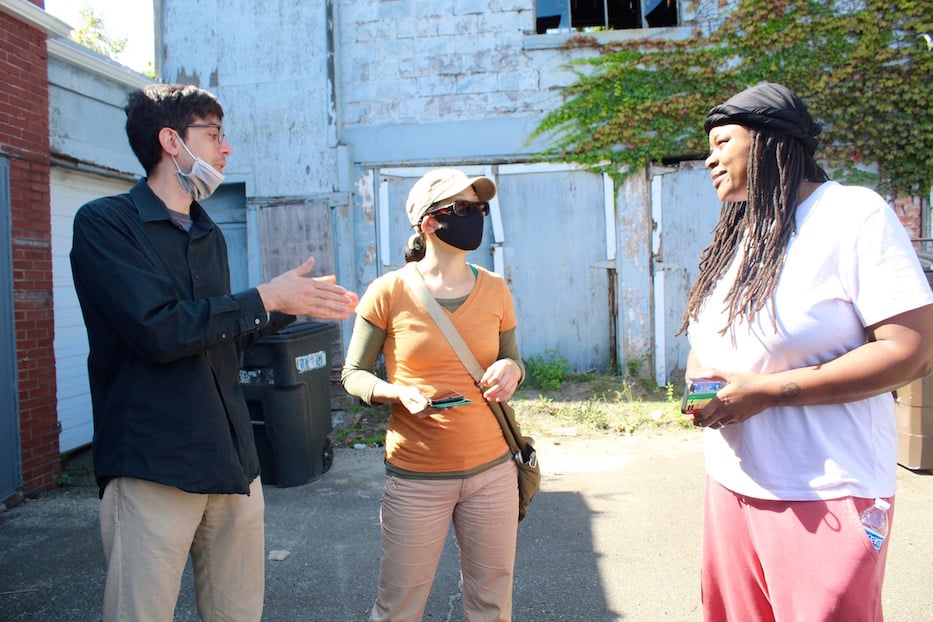 One of those was Derby resident George Moore (pictured above), who arrived with a delivery of canned goods and homegrown jalapeño and bell peppers. Living in the Connecticut Valley, Moore and his wife see food insecurity "all around us," and decided to come out to the launch after spotting it on social media. After depositing the vegetables, he stayed to chat with Harris.

The project comes in an 18-month period that has seen a city- and statewide rise in food insecurity. One year prior to Covid-19, DataHaven found that 22 percent of city residents identified as food insecure—they did not have consistent access to healthy and affordable food—with a rate that was higher among Black and Latinx New Haveners.

In 2019, nationwide food insecurity rates showed a downward trend. Then Covid-19 hit. Tens of thousands of Americans faced food insecurity, some for the first time in their lives. 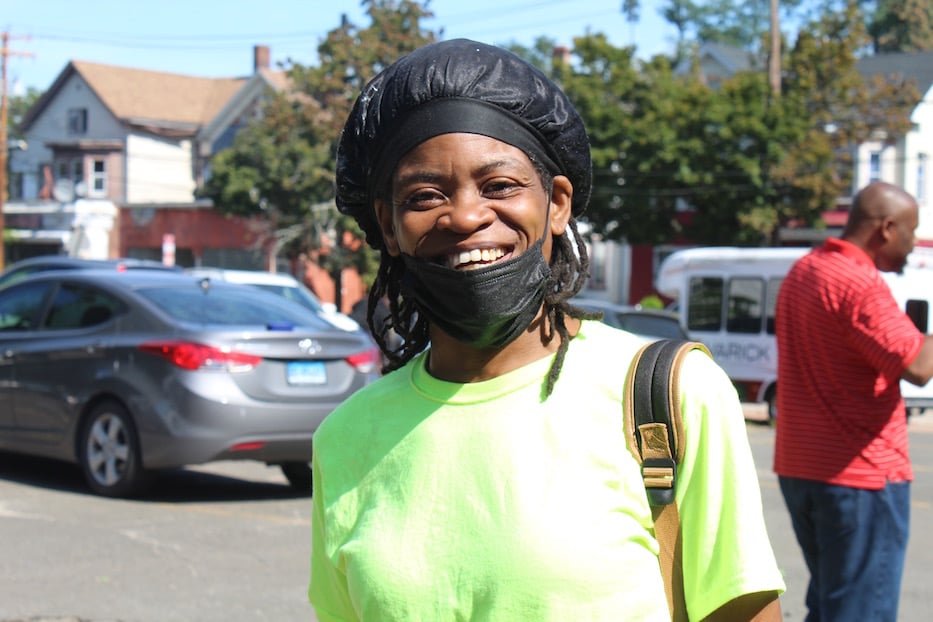 Saturday, Carmel Street resident Terry Miller came by the fridge to take a peek inside, and grab a plate as hot dogs and beef patties sizzled on the smoking grill. Right now, she said, “I’m just holding on,” and saw Fridge Haven’s opening as a chance to gather with fellow members of the community.

In the midst of the pandemic, she’s faced a wave of loss in her family that has made the spring and summer particularly difficult to bear, she said. In April, she lost her eldest daughter unexpectedly. Then other family members also passed away. She said she knows what it’s like to experience food insecurity—and it shouldn’t have to be one more hardship in a world already turned on its head.

“I’m praying that they [community members] be respectful,” she said as she eyed a can of pink salmon. “I think it’s a blessing from God. There should be no reason to have to say that you’re hungry.” 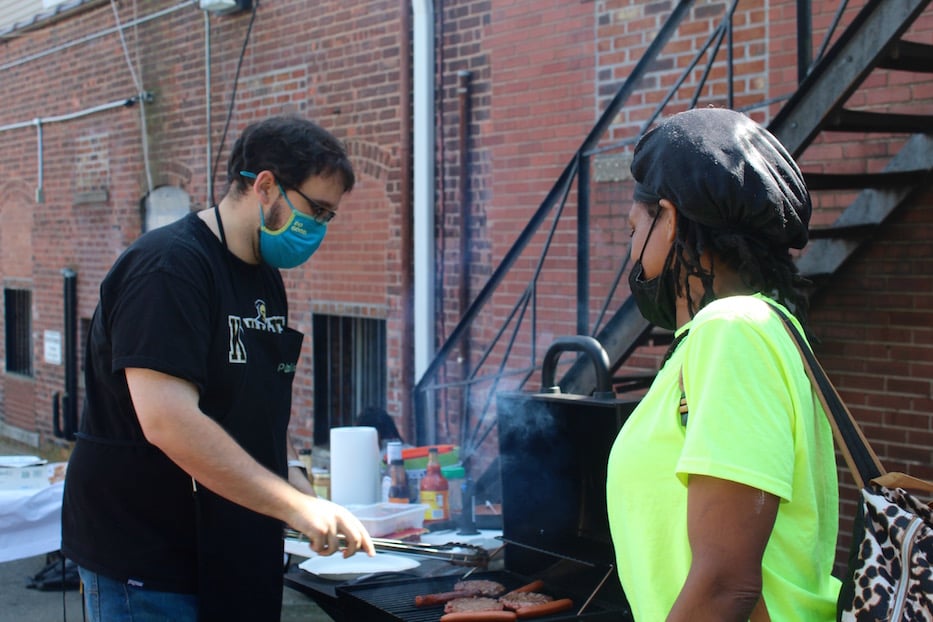 Sherman, who does cleaning services in the neighborhood, said he was excited to see Fridge Haven taking shape. Saturday, he and a friend had been walking up Dixwell Avenue when they saw the barbecue, and decided to take a closer look. A longtime New Havener, he said he has experienced food insecurity, and is grateful for any and all efforts that tackle it.