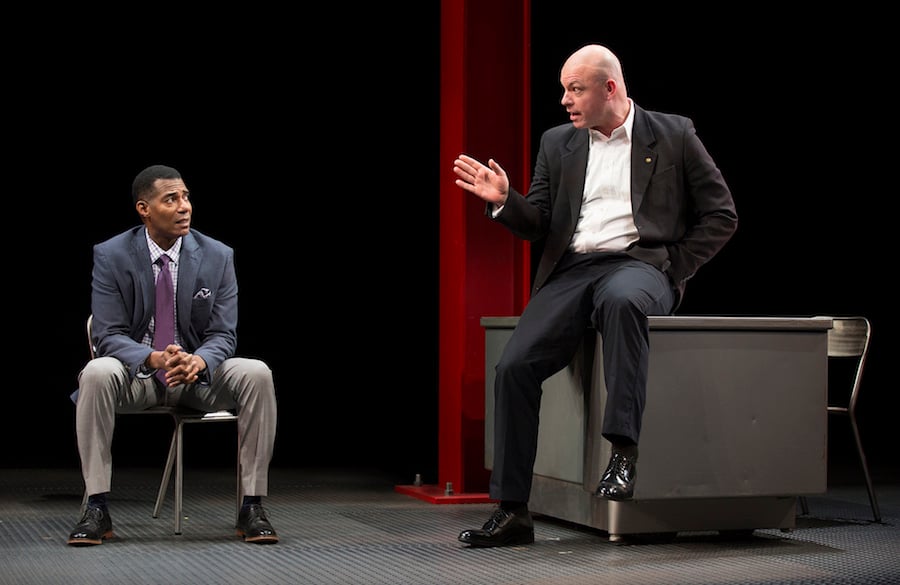 New Haven Fire Union President Frank Ricci perches on the edge of his desk across from Mike Briscoe, who alternates between sitting and standing as the office turns into a tinderbox. There’s an argument ready to burst into flame.

On one side: Ricci’s claim that all men are created equal, and success is just a matter of hard work. On the other: Briscoe’s belief that the opportunity gap is real, and it’s something New Haven is going to have to reckon with sooner or later. The year is 2017, and everything feels combustible. Briscoe swivels.

“I don’t think Frank’s a bad person,” he tells a writer who is sitting right behind them, documenting everything on her phone as she remains quiet. “I think he’s wrong.”

The answer as to why—or why not—is at the core of Good Faith: Four Chats About Race and the New Haven Fire Department, running at the Yale Repertory Theatre through Feb. 23. Written by two-time Yale alum Karen Hartman and directed by Kenny Leon, the play chronicles fallout from Ricci v. DeStefano, a landmark Supreme Court case against the city of New Haven from 19 white firefighters and one Latino firefighter who claimed that they were being discriminated against on the basis of race. Tickets and more information for the performance are available here.

A quick recap, for those who need it: the foundation of Ricci v. DeStefano goes back to 2003, when results of a firefighters’ entrance exam revealed that white firefighters had massively outperformed their peers of color, and the city did away with the results fearing a Title VII discrimination lawsuit. 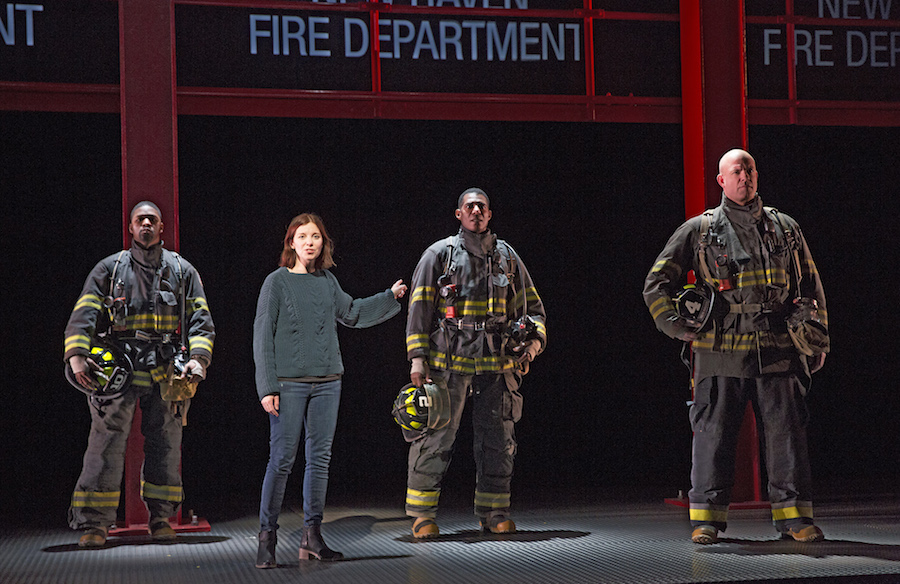 Afterward, a group that would become “the New Haven 20” challenged the decision. The case ultimately went to the Supreme Court of the United States (SCOTUS), where the city was overturned in a 5-4 decision. Its legal fallout followed Sonia Sotomayor to her SCOTUS nomination hearings, and Ricci into years where the case’s implications continue to simmer.

On stage, those details unravel fairly quickly, portioned out through characters who the audience meets in the first act. A writer-narrator (a doe-eyed and very eager Laura Heisler) follows around Ricci (Ian Bedford), Michael Briscoe (Billy Eugene Jones), Capt. Tyrone Ewing (Rob Demery) and Attorney Karen Torre (René Augesen), all real-life figures who featured prominently in the case and its aftermath.

As she explains to the audience in a prologue, she is trying to get to the bottom of not just the Ricci decision, but what the decision means for the city and for its residents. In other words, what we talk about when we talk about race.

With her as a guide, the audience hops between the chats after which the play is ostensibly named, jumping from The Greek Olive on Sargent Drive to the New Haven Fire Academy, then out to suburban Branford and back to downtown New Haven. Vignettes are memorable, just like the nights some firefighters will never forget. In a fiery back-and-forth between Ewing and Briscoe, the latter of whom sued the city and then settled, the case becomes a springboard into respectability politics, economic disparity, and the legacy of Black Lives Matter. Jones is fire, his speech and movement teetering on the edge of balletic.

Sometimes it’s not quite believable—do people really spout whole paragraphs of James Baldwin over their tuna melts?—but it’s frank enough to yank us in, and keep us invested in their fight. As Ewing, Demery is the perfect counter: he listens, then swings back, his argument landing for the writer more often than it lands for Briscoe. It’s a refreshing change on the Rep’s stage, to get something that not only unpacks institutional racism, but also challenges it in ways that this audience may not be ready to hear. 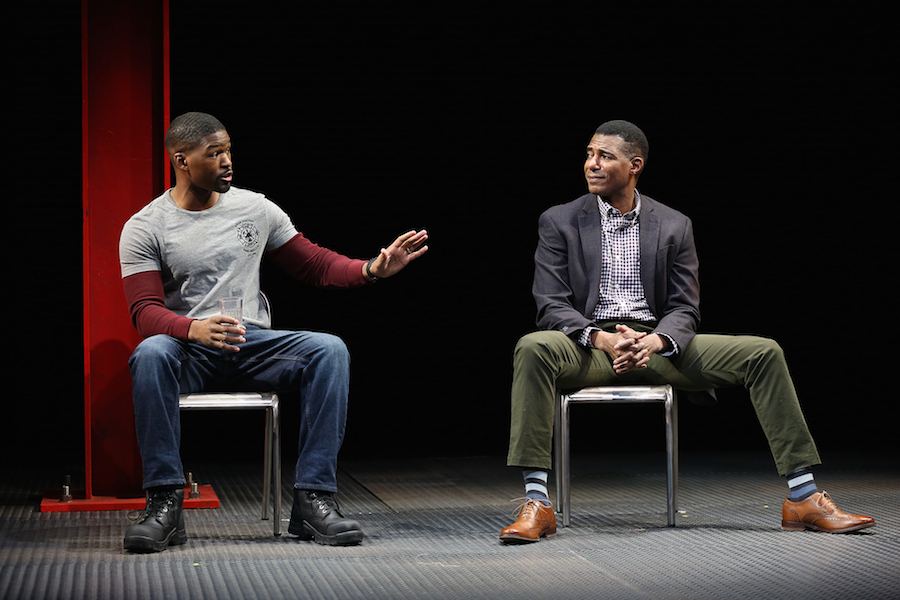 That’s true of almost everyone on the stage, except perhaps the overly eager, Yale-educated, kind of hapless narrator, whose reliability is constantly put into question by the characters around her. As Torre—a feisty Ted Cruz acolyte who is surprisingly sympathetic—Augesen is spellbinding, bulldozing through everything in her way for the sake of the case. She’s refreshing on the Rep’s stage, a conservative character who has complex thoughts and feelings, whose villainous label seems to fall away the longer she speaks her mind.

In fact, she makes points that don’t seem unilaterally conservative at all, giving the audience a chance to track her real-life journey from the far left to the moderate right. She is a little like Tom Hanks’ character wearing a MAGA hat on Saturday Night Live, tearing down stereotype to show how complex arguments—and actions—around discrimination, economic disparity, and the opportunity gap can be. Where Briscoe draws the line between opportunity and lack of it, she blurs it, challenging her audience to step up, and put their actions where they say their politics actually are. And she’s surprisingly, roughly charming—less the pitbull that the New Haven Register remembered her as and more a woman fighting for what she believes is the letter of the law.

There’s sense of propulsion in these scenes, traveling from Grand Avenue to Long Wharf, Long Wharf to Ella Grasso Boulevard, downtown all the way out to the Thimble Islands over what stretches into four years. In the theater, there’s also something satisfying about the staging, a minimal, smooth and towering red set from Stephanie Osin Cohen that frames the actors (think firehouse, but boho chic), and gives them a sense of movement despite the fact that they are seated or standing still for much of the show.

And yet, there’s this gnawing sense that Hartman doesn’t trust her audience to connect the dots, to locate where the fire is while viewers still have time to snuff it out. Both the play’s prologue and postscript lick away at the foundation of the play, like a blaze that has taken over a building when too many windows are opened. The language is overwrought, spoon-feeding the audience as it lays out plot points and human discussion like a five paragraph essay. Long before Hartman shows us how this is a play about justice—and she does, many times—she tells us, lessening the impact when the other fire-resistant boot drops.

And if the devil is in the details, Hartman misses enough of them to make it clear that a visitor, and not a New Havener, has written this show. Bedford looks more like Assistant Fire Chief Mark Vendetto than Ricci, and he talks with a round Brooklyn accent that throws off anyone who has listened to the real Ricci anytime in the last decade (if that seems nitpicky, would you like to see Juliette Binoche take the title role of Oklahoma?). 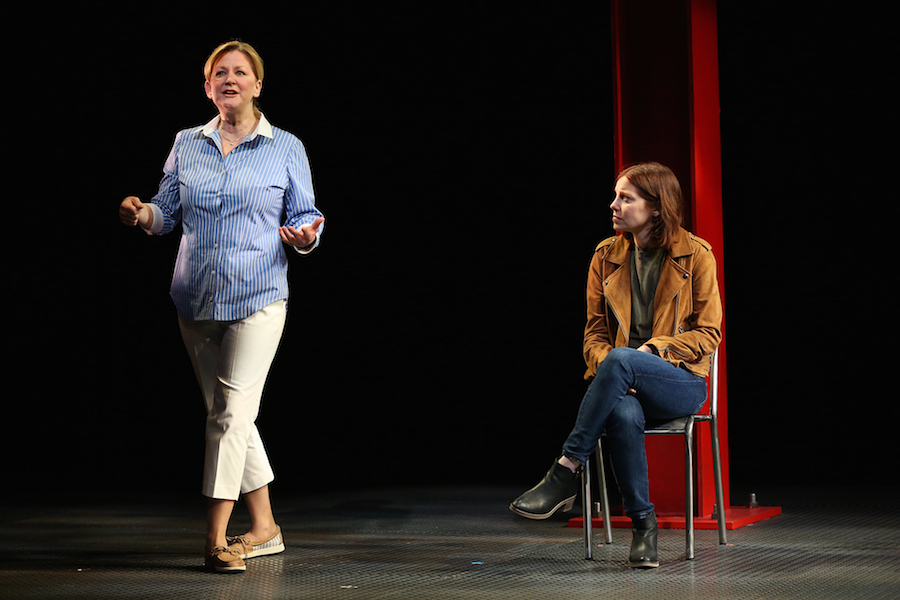 Torre goes to great lengths to discuss the sexism that she and other women in the law have experienced—both her heart and bitterness here come through brightly—but she seems to magically forget that time she tried to pull Judge Janet Bond Arterton off the case, because she had spent some of her time with “self-described feminists.” Ewing and Briscoe discuss The Hill without ever contextualizing where the neighborhood is and why crime is higher there.

Maybe that’s the point—that racism (and sexism, for that matter) can happen in any American city, and every mayor is just one court case away from being called on it. But it doesn’t get to where it’s going. The fire crews never arrive to save the day. Hartman lays a discursive foundation to talk about racism, but spends more time inserting herself into the show than doing her homework on how the city got to the place where Ricci could happen in the first place.

That’s where Good Faith burns hardest. New Haven, this charged and complex little gem of 18 square miles—not 21, as the play states—is often a punch line that the play’s narrator can’t even pronounce the right way. At the top of act two, she catapults the audience right into the messy aftermath of the 2016 election, exclaiming “I have got to get back to New Haven … who has ever said that?” Her timing is comedic: she takes a breath, pauses, and smiles a little as the words leave her mouth. The question hangs in the air like the butt of an impending joke.

But the answer is that a lot of people have said that, because it’s home. Maybe it’s where they were born; maybe it’s where they’ve chosen to stay. But Hartman hasn’t, and her surrogate inserts herself too often and too glibly into a story that is not hers. It all results in an urge to see the transcripts, to hear the recordings, to read earlier drafts of this show.

Good Faith is supposed to be about the power of active listening and discourse, and at its best it is. But in the end, it spends more time on the question of who is a worthy narrator, and who is worthy to receive the story.

And yet, one finds themselves wanting to see another draft, because where the play succeeds—and it does, sometimes—is in an earnest plea to get us to talk past, under, and through partisan lines. The characters have enough distance and candor to do that. At the end of the day, they will put their lives on the line so that anyone else may see another day.

Why can’t every single viewer try that, too?