A Teaching Champion Gets Her Due 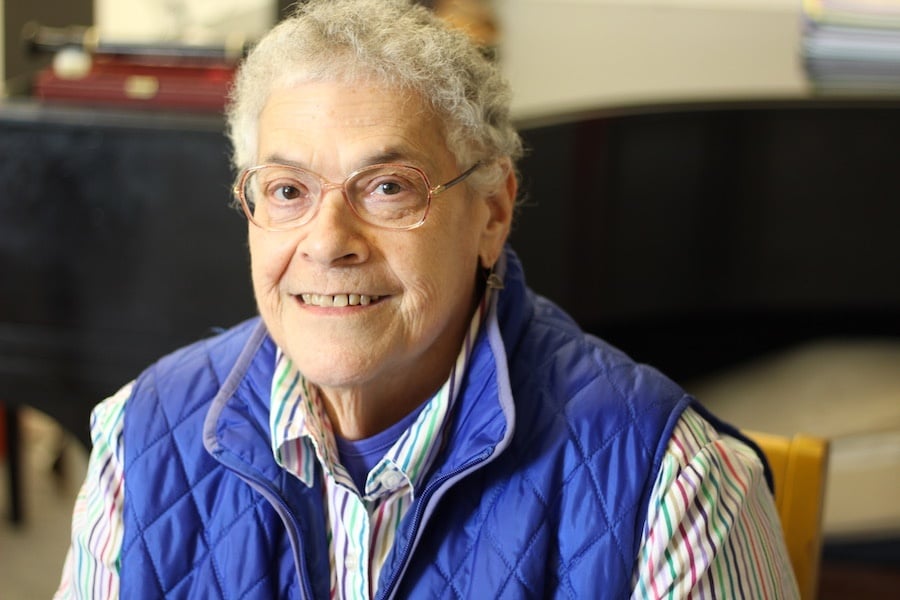 For 55 years, Neighborhood Music School (NMS) teacher Grace Feldman has taught thousands of students to pick up their string instruments and make magic. She just never thought it might one day score her institution $10,000.

Feldman is the chair of NMS' strings and early music departments, head of the school’s robust ensemble program, and teaches violin, viola, viola de gamba and recorder to over 100 students a year. Earlier this fall, she was named one of TIAA’s 100 “Difference Makers,” an award that carries $10,000 to the awardee’s institution of choice. Those funds will go specifically to programming at the school in which Feldman has expressed interest.

Out of 4,000 who were nominated and 100 who won, she is the only honoree from the state of Connecticut, and one of just five to receive the award in arts and culture. In all, TIAA donated $1 million nationally through the program, an initiative to celebrate its centennial.

“Grace is widely regarded for her musical accomplishments, but she also acts as a mentor, a guide and a trusted advisor to so many of her students,” said NMS Executive Director Dan Gurvich. “Her personal spirit of generosity and caring is outstanding, and we are so fortunate to have her with us, sharing her passion and energy as an integral part of our school community.”

Feldman’s journey to the award began earlier this year, after receiving a nomination from NMS Board Member Kathrin Lassila, editor in chief at the Yale Alumni Magazine. In May, the two began bouncing ideas back and forth over email, Feldman sending thoughts late into the night, and sometimes again in the wee hours of the morning. At one point in their long exchange, Lassila told Feldman that several of the emails brought tears to her eyes. Not because of her expansive resume, but because of the moving detail in which she wrote her life.

In each message were decades of teaching experience, starting when Feldman and a twin sister were just 6 years old at the Brooklyn Music School in New York, and she picked up a violin for the first time. Fast forward, and Feldman was skyrocketing through degrees at Brooklyn College and the Yale School of Music, and teaching experience at the New England Conservatory. After returning to New Haven in 1964 (she had graduated from Yale the year before), she watched NMS’ modest home in a Wooster Square brownstone grow to its Audubon Street campus, then expand into a Guilford branch and foray into a new middle school. As she crafted a narrative, she fired off sentences to Lassila that read somewhere between frenzy and poetry.

“Teaching in such a way that people feel supported and emboldened to walk forward in their lives,” she wrote in one message. “Leading students to find solutions by working together. Learning that community is more important than singularity. Finding out that things of the soul are more important than money.”

Sometimes, her memories centered on a single student—like Justin Gonzales, a violinist Feldman began to teach in 2014 when he was just 12 years old. Gonzales’ parents didn’t speak a lot of English, and the family didn’t have much money. On scholarship from the school, he learned quickly, soon able to keep up with Feldman’s Baroque ensembles.

When funding looked like it might become an issue, one of Feldman’s adult students began to sponsor him. Now, Gonzales is a senior at Choate Rosemary Hall. When he applied, Feldman helped him rehearse for and record his audition tape.

Sometimes, she didn’t even know the students’ names. Writing to Lassila just past midnight on May 11, she recalled one especially young girl, who peeked in on her classroom 10 minutes before an ensemble practice began. Feldman recalled that it was “clear to me that she wants permission to come in.” And so she invited her over to a thicket of instruments, carefully fitting a violin beneath her tiny chin. The girl’s eyes lit up. One of Feldman’s cello students stepped in with the same offer to try his instrument.

“Mark gets her to hold onto the bow and draw a ringing sound out of each string,” she wrote. “She loves it. And I know in that five minutes I have changed her life forever.” 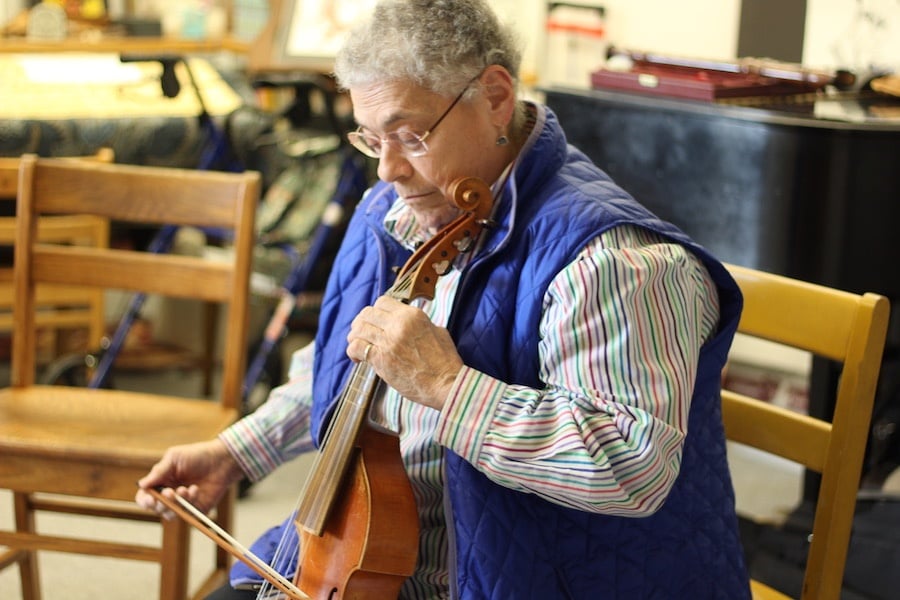 They’re just two of thousands she has taught over five decades in New Haven, and more around New England. There is the student who she mentored through high school and again after college, who went on to become a music instructor at Educational Center for the Arts’ (ECA) nascent Shanghai campus. There’s the 94-year-old who comes in once a week to play recorder, and tells Feldman she's afraid that her motor skills are slipping, and her mind might be next. There’s a student in her seventies who suffered a stroke last year, and can’t go anywhere without a heart pump, but still shows up faithfully for her lessons. Or one with Alzheimers who played in a Baroque ensemble up until last year, Feldman playing right next to him as music built a bridge to memory.

"Of course it's different teaching those two ends of the spectrum, but it's part of what is fascinating," she said in an interview in her classroom last week. "You have to be creative and inventive, and find the ways to say something to somebody so that it catches. So that they really ... they get it. And at the same time you have to be critical, and yet not too critical, so that you get them to improve but you don't talk them down."

As she unspooled stories for Lassila, and then for the formal TIAA application, Feldman said she was initially intimidated by the applicant pool. At NMS, she has grown comfortable speaking up in staff meetings, sometimes acting as a voice for younger faculty who seem hesitant to say everything they’d like to. But as one in 4,000 applicants in arts, health, and human service professionals, she wasn’t so sure those credentials held up.

“You know, I read these things as they were coming in … and I thought, ‘I don’t stand a chance,’” she recalled, a smile creeping across her face. “In this mode, here, I can recognize exactly what I’ve done. ButI didn’t think it was going to be significant enough out there, next to someone who has made a medical discovery and stuff. I felt like people in the sciences were putting forth stronger statements than I could ever put forth.”

“But the thing is, music is very important in people’s lives,” she said. “I’m really grateful that TIAA recognized that that is a big thing for a lot of people.”

In early November, Feldman was also honored by the Connecticut Women’s Hall of Fame as it celebrated a quarter century of “Putting Women In The Spotlight” at an annual awards ceremony. For her, Feldman said it marked a sort of coming full circle—also honored was Music Haven Founder Tina Lee Hadari, who covered for Feldman during a prolonged illness last year.

At the ceremony, Feldman gave a 30-second speech that praised a growing number of women at NMS and in the field, “coming forth, speaking out and standing tall” as they take positions of arts leadership around the country. She glowed as she spoke about the role of teaching in her own career, at a music school founded over a century ago by women who had the same, steadfast goal.

“That’s been the joy of my life,” she later said.