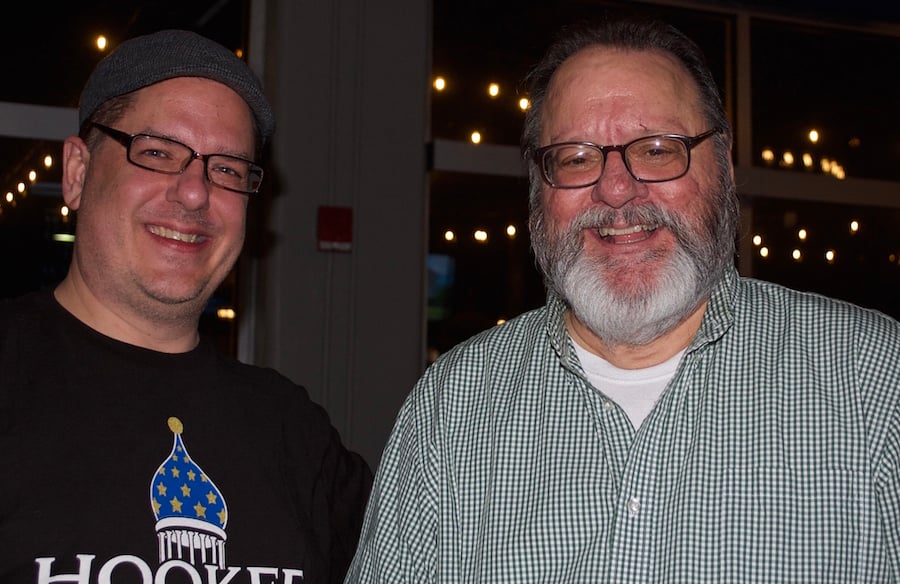 An unremarkable bodega now occupies the site of McGovern’s Saloon, at Albany Avenue and Center Street in Hartford’s Clay Arsenal neighborhood. Its supplier, Link’s Brewery, was in the back.

Behind Fairmount Street, in the middle of what is and was a residential block, sat a stone barn. Barrels of beer lined a tunnel spanning three blocks that connected tavern and brewery to storage for hops and other supplies. The tunnel’s exact date is unknown, but is suspected to antedate Link’s, which opened in 1872, just as Connecticut’s first prohibition ended.

Last week, people's historian Steve Thornton spoke on Hartford's hidden breweries, Blue Laws, and more at Hopsy-Turvy, a three-part series on Hartford’s beer history. He and co-producer Tomas Nenortas, bonded at a local authors event earlier this year and began brainstorming a way for Nenortas to promote Quiver, his family’s Krupnikas spirit. With their shared love of history, Hopsy-Turvy hatched.

“Ordinary people are the real makers of history,” Thornton announced at the event, coincidentally scheduled for the 85th anniversary of Prohibition’s repeal.

To celebrate the occasion, beer and history nerds toasted with cake in the back room of Hartford's Hooker Brewery. As Thornton flashed a map of the tunnel on the projector screen, attendees whispered their surprise, not for the last time that evening. Most of what is commonly known about Prohibition has been gleaned from pop culture, and Hartford appears nowhere in it. That’s where Thornton’s research comes in.

Through lectures in all three of Hartford’s current breweries, visitors learned that in the late nineteenth century, Link’s was one of four breweries operating in the city, with others on Bellevue Street in Clay Arsenal, Park Street in Frog Hollow, and Sheldon Street in the old East Side. By the turn of the 20th century, there were over 100 bars and taverns on the East Side.

Talk of the East Side, better known as the infamous Front Street neighborhood, earned knowing sighs from the audience. This was Hartford’s rowdy district, complete with brothels and an opium cellar. Seen as a center of sin, residents were fed rhetoric that would make the razing and erasing of this neighborhood more palatable, while ensuring it be seared into memory.

Constitution Plaza has since replaced Front Street; highways and parking lots cover much of the former East Side neighborhood, all a short walk from the rehabbed Colt Armory that houses Hooker Brewery.

Years before urban renewal, when there was a national push for legislated sobriety, temperance societies in Connecticut “got no traction until the war,” Thornton said.

The moral argument against drink failed to resonate with the state’s largely Catholic population that had no religious opposition to alcohol, nor with Connecticut’s Irish, German, and Italian immigrants who maintained their casual cultural acceptance of drinking.

A “War Prohibition” took place in 1917. To prioritize barley for the soldiers in Europe, the government ordered a reduction in beer’s alcohol-content. There was “no big outcry,” Thornton said, suggesting this policy was not enforced locally and “near beer” remained available.

When the Eighteenth Amendment was passed three years later, “by and large, it wasn’t” obeyed in Connecticut, Thornton noted. Connecticut and Rhode Island were the only states to reject the National Prohibition Act. Approaching Prohibition, customers were urged to stock up while their suds were still cheap.

“The wealthy could easily defy Prohibition” as they were “not subject to the long arm of the law,” Thornton added, but resistance came from the working class as well, with labor unions fighting back. “Not only did [the brewery workers] like to drink,” Thornton explained, “their livelihood depended on it.”

Consumers found creative ways to access brews. Thornton told of a telephone booth speakeasy; requesting change to make a call, customers would be handed a nickel and a glass. They would then enter the booth and pour their own beer. Legal loopholes were plentiful: sacramental wine was legal, and, physicians could prescribe beer and other spirits.

Enforcement was another matter, with few federal agents assigned to Connecticut. Still, McGovern’s Saloon was one of several raided in 1921. The secret tunnel’s two entrance points were walled off by the mid-twentieth century, but it seems the storage space may have come in handy during Connecticut’s most recent dry period.

The next Hopsy-Turvy series, coming in 2019, will focus on spirits and align with the official launch of Quiver Spirits. Learn more at Quiver Spirits or The Shoeleather History Project.