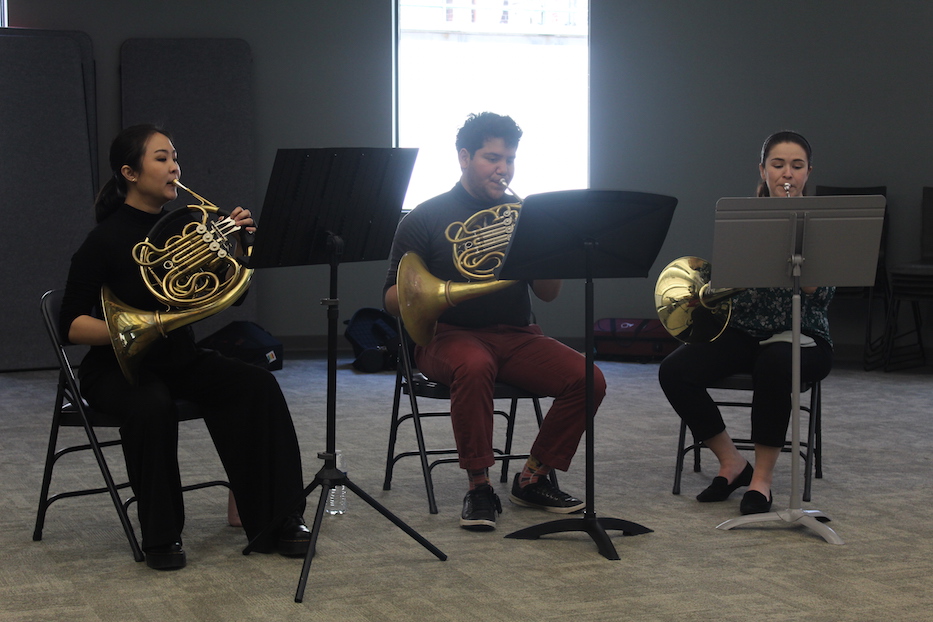 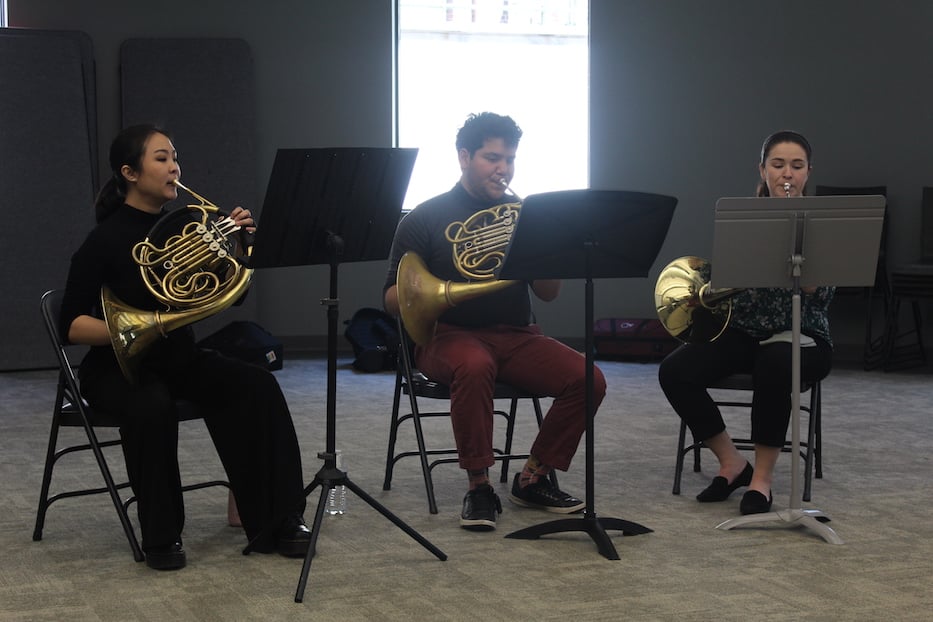 Tucked away in a basement off of Elm Street, four audience members listened intently. On a makeshift stage, musicians Franco Ortiz, Ava Conway, and Xin He played in harmony, filling the room with the melodic hum of French horn. The mellow timbre of the horns filled the air. They sounded warm and welcoming, like a bonfire in chilly weather.

So began the third monthly “Horn Hangout” at the Ives Main Branch of the New Haven Free Public Library, located at 133 Elm St. in downtown New Haven. Manager of Adult Services Seth Godfrey and library aide Delaney Kelly designed the hangout as a chance to bring free music into the space, both said. The horn players performed three times: Saturday April 2, 23, and 30.

“Culture is important,” Godfrey said in a phone call after the event. Kelly added that events like the hangout enrich and broaden the cultural landscape of New Haven and give new and returning patrons a chance to see what the library has to offer.

Godfrey and Kelly launched the series September 2021 with $750 in federal American Rescue Plan Act (ARPA) funding. The funds, distributed by the city’s Department of Arts, Culture & Tourism, were part of a larger $3,00 chunk that the Department of Adult Services received. Godfrey said more programming is forthcoming later this year.

Kelly said she was excited about the program because she loves classical music and wanted to make it accessible to listeners of all ages. For Godfrey, having the horns onsite was also serendipitous: he has a special connection to the french horn. When he lived in the Soviet Union in the 1980s, there was a trio of horn players there that he enjoyed hearing. The group included Yakov Shapiro, who some consider the greatest French horn player of all time. April’s final configuration spanned three countries and decades of experience. One of the musicians, Ava Conway, is originally from Los Angeles but ended up in New Haven by way of Yale, where she is earning her master of music degree in performance. She’s been playing the horn for 11 years. Conway said that she found her love for the French horn from listening to movie soundtracks by John Williams and James Newton Howard.

Once she started taking lessons, some of her teachers happened to be some of the musicians on the soundtracks that stuck out to her. She stayed with it.

“I think all of us would love to win an orchestra job, and have this be our profession,” she said after the April 30 performance.

Ortiz was born in Lima, Peru, but spent his childhood in Miami, Florida. He has been playing the French Horn since the fifth grade, when he was first introduced to the instrument in a summer program from the local college. As he remembers it, the college gave students the opportunity to try out oboe, bassoon, and French horn. Ortiz had recently seen “Peter and the Wolf,” in which the horn is the wolf’s theme. He fell in love with the instrument.

Xin He hails from Guangzhou, China, but grew up in Baltimore, Maryland. She played the trumpet until she was a rising seventh grader, and then was forced to switch instruments unexpectedly. When He got to her middle school band, her band director didn’t have any horn players—and let her try the instrument out. The first thing she played was a C major scale. She stuck with it from then on.

Back in the basement, it seemed as though the horns were sounding a call. It was an invitation for those nearby, to lend their ears and take time to listen. The sound was clean as a whistle, and rolled out across the room smooth as silk. Each composition was expertly performed, the soul in each piece was evident.

The audience seemed captivated by the musicians, and soon the present composition was complete. Applause sounded, and the musicians smiled and continued on to the next song.

This piece comes to the Arts Paper through the fifth annual Youth Arts Journalism Initiative (YAJI), a program of the Arts Council of Greater New Haven. Read more about the program here or by checking out the "YAJI" tag. Makeda Murray is a sophomore and is homeschooled.