HSC Students "Level Up" And Fly Into The School Year 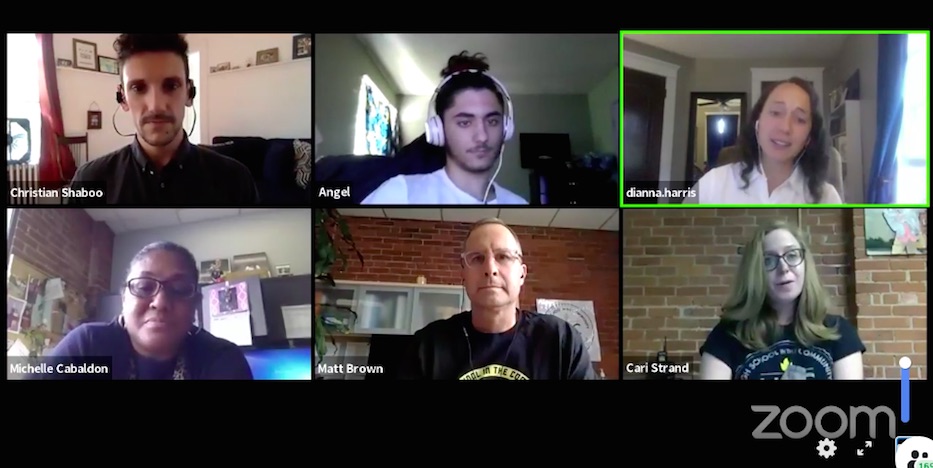 One student pulled out his cap and gown from eighth grade graduation, because it made him feel more comfortable about starting high school. Several others stopped a conversation to let their classmates know, gently, that their microphones were still muted. A third brought her dog to the first day of class—and got a warm reception even through a screen.

Thursday morning, students and administrators from High School in the Community (HSC) kicked off the school year with “Flight Days,” a new take on the high school’s advisory system tailored to fit remote learning. Last week, New Haven’s Board of Education voted to keep learning fully remote for the first 10 weeks of the academic year, to stem the potential spread of COVID-19 among students and their families. New Haven is currently the only district in the state to go fully remote; others have a mix of in-person or hybrid learning.

“We are offering a start to the school year that is unlike any school here in New Haven and, dare I say, the country,” said Christian Shaboo, a Future Project Dream Director with the school. “Like, the way we start focused on community, focused on really doing some self-discovery and understanding. What are the goals? What do you want to be heading for this year, the rest of your life, and how do you make it happen. And how can we create the community to make it happen?”

While the school has held its opening “Flight Days” for the past seven years, this is the first time they are virtual, organized entirely over Zoom and Facebook Live instead of in the school’s capacious, bright cafeteria. Past celebrations have featured live music, dancing, and presentations from peer leadership. Thursday, everything took place across a network of glowing screens, with Zoom’s signature one-inch boxes and Google Meet classrooms that were waiting for students.

This year, the school is using the theme “level up” to promote social-emotional learning (SEL) in the face of both COVID-19 and ongoing, school-wide conversations around racism and social justice. Students start their days in discussion groups called “Flight Crews,” in which they are encouraged to speak about their lives, their short- and long-term goals, their own mental health, and how they are planning to “level up” for themselves and for their school and home community each day.

The school uses a framework that follows the acronym CRAIG, with five core pillars of compassion, respect, action, integrity and greatness. This year, faculty members have established a CRAIG rubric that aligns with SEL's five-spoke model, including social awareness, relationship skills, self-management, decision making and self-awareness.

“Flight crew is a thing! It’s a real thing. It’s not just advisory,” Building Leader Matt Brown told students during the 25-minute launch. “It’s this thing that we know needs to exist to get us through this time that we’re in, and to really take advantage of all the skills our teachers have.”

“HSC is the small school for students who want to do big things,” he later added, in a nod to the school’s motto. “There has never been a time in your lifetime where there is more necessity for people to do big things than there is right now. When this all started, people didn’t know what was up. People thought it was a pandemcation, more like a long snow day. We are in a different spot, folks. We are starting the school year. This is school. And we have problems to solve. And we have to solve them together.”

Flight Crews also cut right to the heart of a larger concern: the mental health of students during COVID-19, when the existing anxiety of being a high schooler is compounded with potential isolation anxiety, stress, unsafe home situations, rising food insecurity and unemployment, and the parallel pandemic of American racism.

This year, seniors don’t know what college admissions, proms, or graduations will look like in a few months. Some students are still experiencing anxiety over the SAT as colleges debate whether to waive the test. Over and over again Thursday morning, administrators urged students to reach out and ask for the help they needed.

“We want the first day of school to feel like, ‘I know what this is about, I know what I’m here for, I know what I want to accomplish,’” said Cari Strand, the school’s curriculum leader. “And we wanted our first days to be CRAIG-gier. Right? More compassion. More respect. More integrity and more greatness. And we’re really focusing on that last one this year with our ‘level up’ theme.”

“We are here for you, and we want this to be an amazing year,” she added. “So reach out. Ask for the support you need. Ask for help. Right? That’s part of greatness.”

During opening and closing ceremonies, mental health took center stage without administrators or peer leaders ever having to use the words. As the day began just after 8 a.m. Shaboo and English instructor Dianna Carter danced from their seats to Beyoncé’s “Brown Skin Girl,” trading praise on the musician as the number of viewers rose in the upper lefthand corner of the screen. Shaboo declared that the group was ready to get started.

As if someone had flipped a switch, seven smiling faces appeared, each inside a one-inch box. Culture Leader Michelle Cabaldon encouraged students to move outside of their comfort zones and get to know their classmates, even if that employed some new virtual strategies. She later shared a song that remixed the words “level up,” dancing in a paper crown that a student had made for her last year.

Senior Thomas Sabin, a member of a “Flight Days” student leadership team, said that his final year at HSC wasn’t starting as he’d imagined it—but he was still planning to give it everything he had. He noted that he hoped to be back in the building in time for in-person classes, senior prom, and graduation later this year.

A few guest speakers worked to pump students up, ready with advice that was often candid, and returned to the idea of a school-wide community, self-respect and asking for help. George Black, who grew up in New Haven and now runs The Men Up with Shaboo, assured students that they were all worthy of “the love, and the belonging, and the connection that is being offered to you this year.”

Tymaine Lowery, an HSC grad who has helped coach the city’s anti-violence basketball league, filled the screen in a pre-taped video from his car, reminiscing fondly on his time at the school. A smile teased at the edges of his mouth as he spoke.

“I first came into HSC with no dreams on what I want to do with my life,” he said. “I just came in thinking everything was a game, you know? And that … that was really it. But the teachers are really there for you guys. The support system at HSC in general is very, very great. HSC will be behind you on whatever you want to do. Literally, whatever you want to do, with your life.”

“That’s just how it is,” he continued. “They care for their students. Even if sometimes you have it rough on your head, they care for they students a lot. Like, I was one of the students that they cared for a lot. Because I was going through a lot. And if you’re going through a lot, they’ll see that. Just communicate with them. Don’t be scared to speak your story. Just communicate with them, and they will help you.”

In their smaller flight crews on Google Meet, students moved through first-day jitters from their homes, workspaces expanding behind them as they did a series of grounding activities. (read more about that in the New Haven Independent). That grounding is part of a focus on “healthy habits,” Strand said—like taking breaks, eating properly, doing schoolwork without distractions, and switching to something extracurricular after the school day ends at 2:10 p.m.

Before classes, students also got a final sendoff Angel Alvarez, a senior who said he faced some mental health issues of his own in March, after schools closed unexpectedly to prevent the spread of COVID-19. In his own flight crew, he spoke with classmates about mental health and the importance of forming good academic habits, from waking up on time to staying on top of assignments. The conversation veered to Black Panther actor Chadwick Boseman, who died of colon cancer at the age of 43 last week. Alvarez called him a real-life hero, noting that he felt inspired and ready to learn after talking to classmates that he had missed seeing for months.

“Being able to hear the voices of my peers, and being able to remember that these are my friends and my teachers and they’re here to help me, that made me feel comforted,” he said. “I think if we keep this up, I think we’ll be on the right track.”