Hundreds “Squad Up” And Rally For Trans Rights 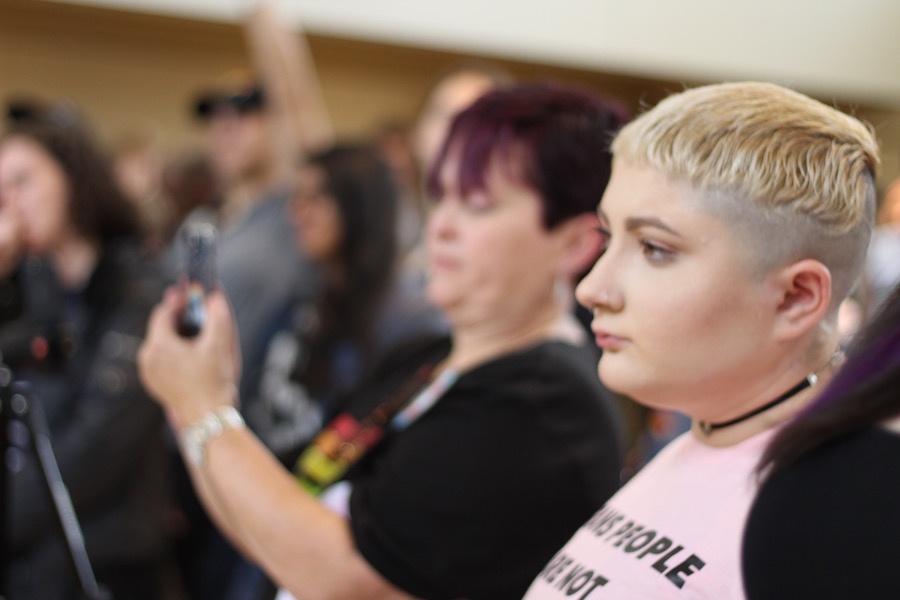 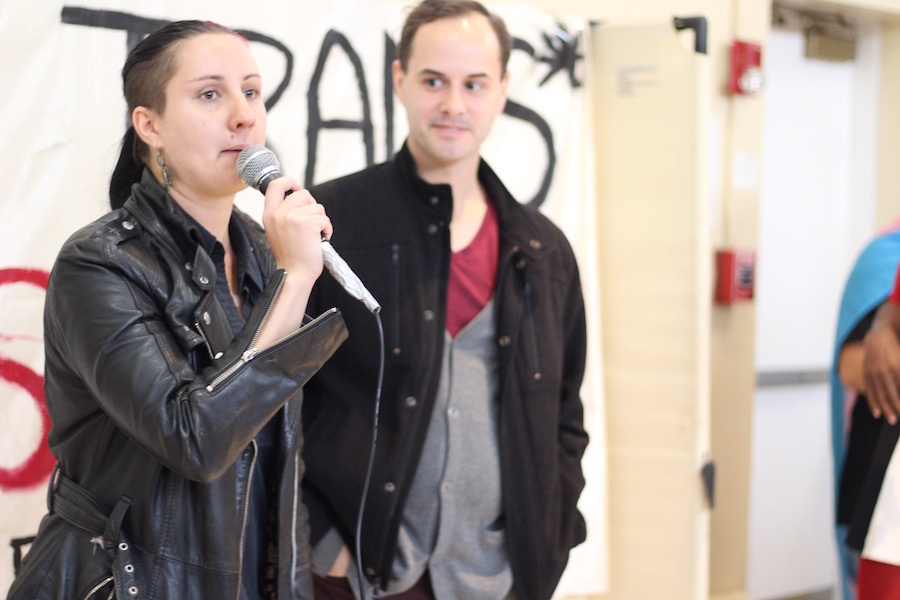 IV Staklo had three thoughts when they heard about a Trump Administration memo to narrowly define gender earlier this week, effectively erasing trans people out of existence.

The first was that they were worried about their immediate trans community. The second was that Trans Lifeline, of which they are the hotline director, was about to get a lot of calls. The third was those calls were a good thing, because it meant that people would be reaching out for help.

Saturday afternoon, Staklo was one of over 200 trans activists, advocates, LGBTQ+ community members and allies to gather at United Church on the Green’s Temple Street parish house to rally for transgender rights.

The rally, which was moved inside due to Saturday’s wind and rain, was organized by the Connecticut Party for Socialism and Liberation (PSL) with support from 25 other organizations including Black and Pink, True Colors, the New Haven Pride Center, Trans Lifeline, Planned Parenthood of Southern New England, Trans At Yale, and Women’s March CT.

The rally came a week after the New York Times obtained and published sections of a memo from the Department of Health and Human Services seeking to institute, under Title IX legislation, a definition of gender based on biological sex.

As Saturday’s crowd grew just after 1 p.m., several attendees held up handmade signs and tightened rainbow and blue-and-pink transgender pride flags around their shoulders. At the front of the parish house's common room, Staklo and local activist Chardonnay Merlot traded off emcee duties, praising the church for “saying no to trans pneumonia” and giving the group their space. 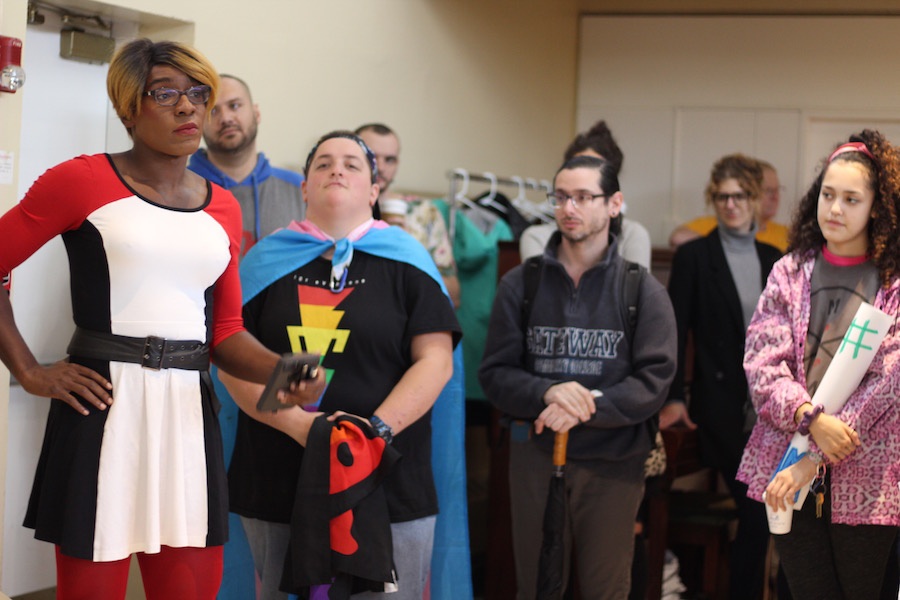 Speaking first, Merlot told the crowd that she had been incensed, upset, and scared by the memo—but not specifically surprised after decades of violence against transgender people in the United States. The morning she'd read the article, she recalled running "the angriest nine and a half miles in my life" on her jog. In the week that followed, she said she's found solace in her work for Trans Lifeline and trans adult support group at the New Haven Pride Center, where friends, colleagues, and trans people she was meeting for the first time were also angry and sad.

“We will stand at the barricades together. We will squad up and we will fight,” she added. She raised her fist, leading the crowd in a chant of "won't be erased" and "we are here."

Taking the mic back, Staklo kept the crowd fired up, giving the crowd a quick history lesson. 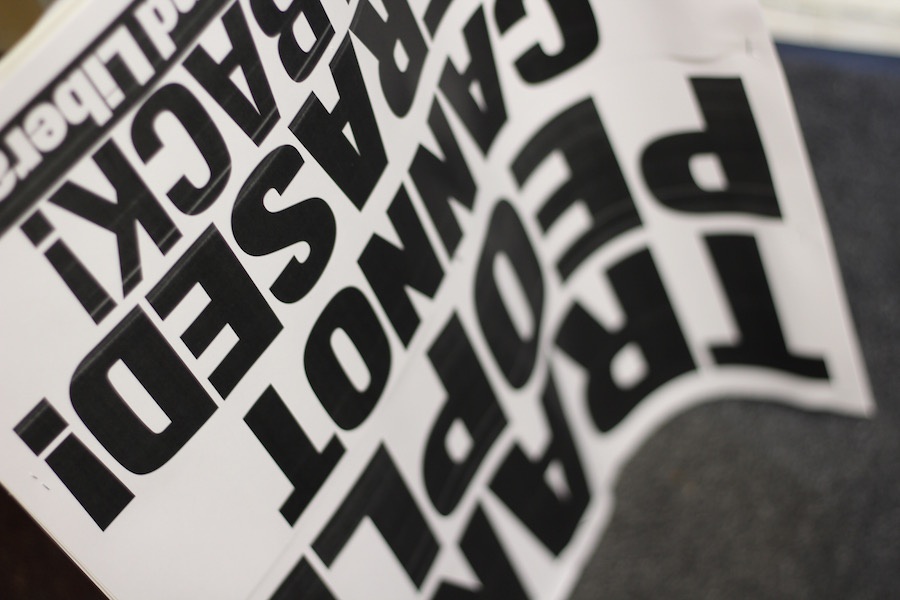 “By building community and being there for each other, and by reaching out a hand to a fellow trans, questioning, intersex non-binary person that you know and by just checkin in with them … and also committing yourself to fighting for our people, that is how we get change. And that is how we prevent trans suicide.”

“At times, people have used God as a justification for their bad behavior,” said Lisa Koskelowski, a trans woman and advocate who is also a deacon at the church. “If anyone has offended you in God’s name, I’m sorry … God loves you just as you are. God has more faith in us than we could ever have in God.”

“Say, ‘I am loved!’” she urged attendees, looking around the room.

“I am loved!” the crowd roared back. 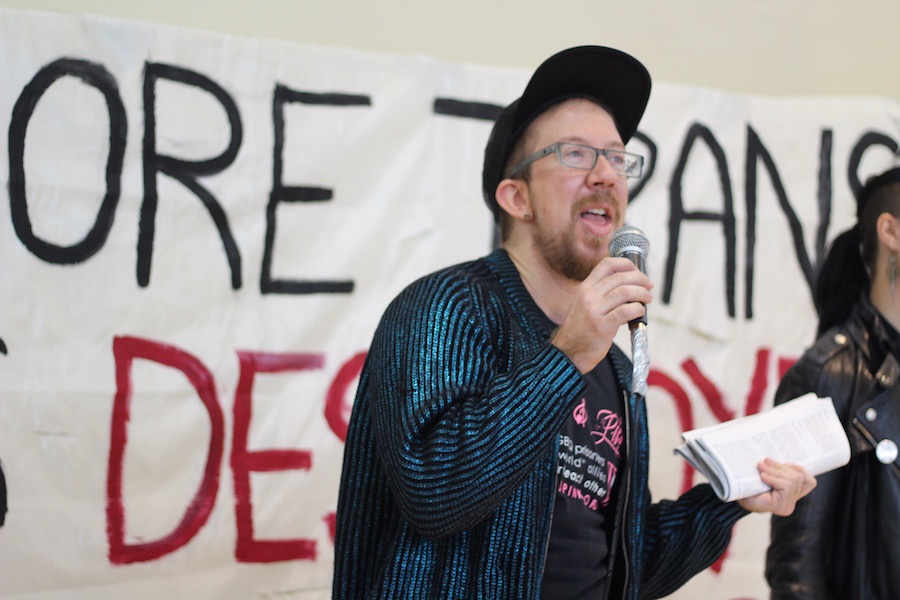 Several of the rally’s speakers offered concrete actions that attendees could take, particularly with the Nov. 6 midterm election approaching. Representing LGBTQ+ prison advocacy organization Black and Pink, Reed Miller praised new transgender rights laws that have passed in Uruguay, and suggested the crowd could look to them for inspiration—while fighting for similar rights on home turf. True Colors representative Paige Tyler urged attendees to “speak your truth and speak it loud, especially where they don’t want you to.”

He noted feeling buoyed by how many people he’d spoken to who plan on showing up at the polls, and by the intergenerational, intersectional work he’s observed in the LGBTQ+ community. And he gave the crowd advice. 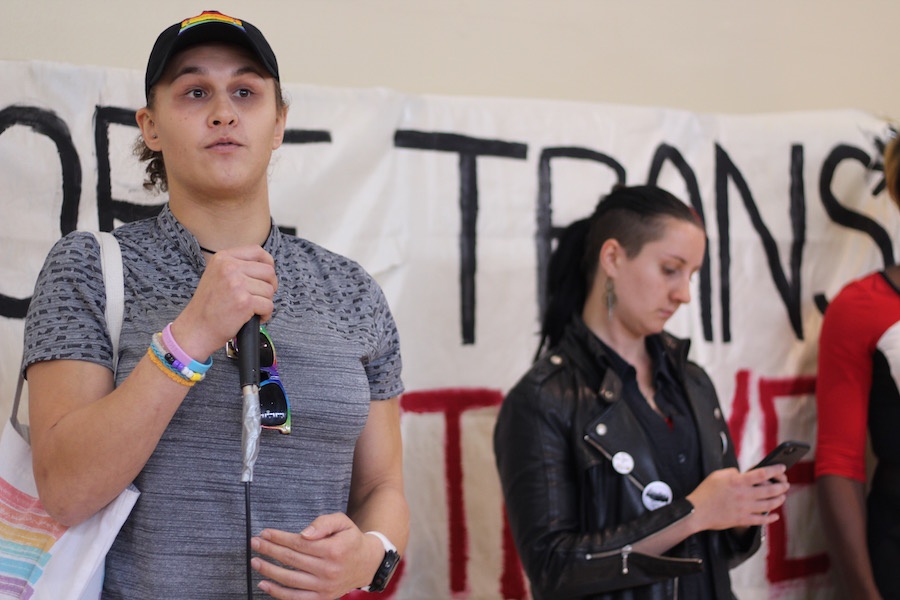 Stamford City Rep. Raven Matherne, who made history last year as the state’s first elected transgender politician, called on attendees and advocates not just to vote in November, but to hit the pavement for candidates, knock on doors, and consider running for political office. Suggesting that voting alone “should be a minimum requirement for participating in society,” they encouraged members of the crowd to go out into the community and meet people who may or may not understand trans rights.

“You break down that barrier of hatred and become a person,” they said.

If you or someone you know is looking for trans support and community, Trans Lifeline is accessible 24/7. The Trevor Project offers 24/7 confidential support for LGBTQ+ youth in crisis. Other resources include The Trans Women of Color Collective, The Sylvia Rivera Law Project (SRLP), and The National Center for Transgender Equality. To watch more speakers from the rally, click on the video below.