In Night Swim, Joan Kwon Glass Dives Into Her Grief 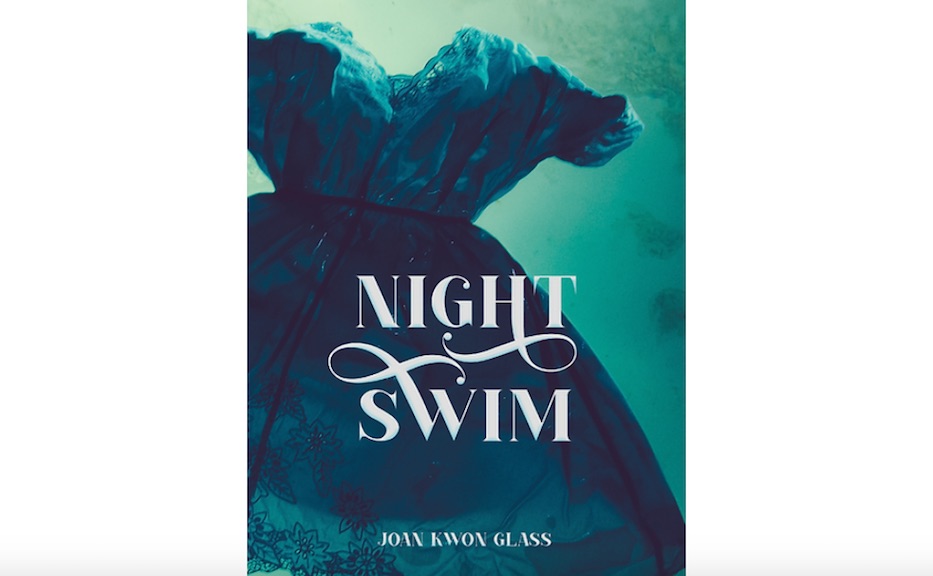 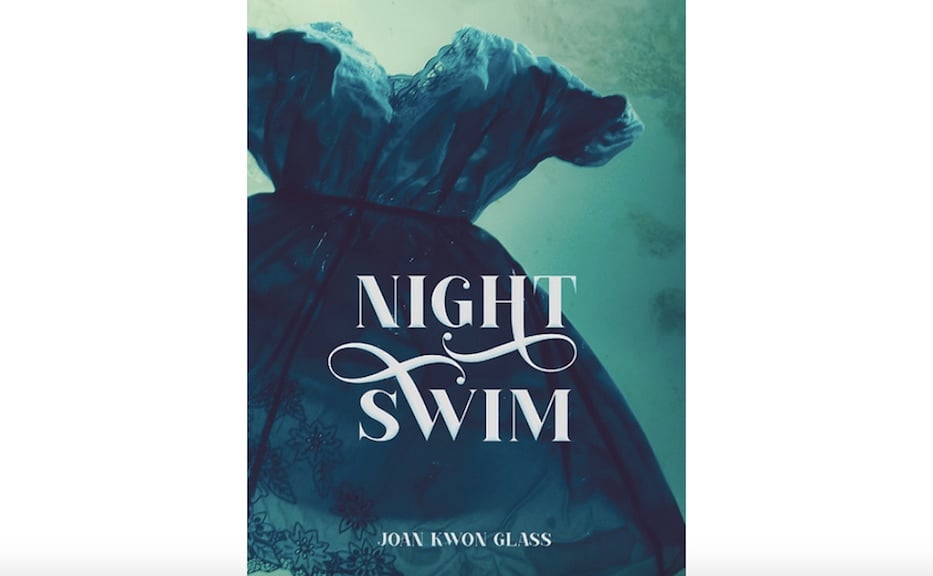 Cover art for Night Swim courtesy of the author.

The image is vivid, immediate. Joan Kwon Glass has walked through the doors of a Michigan funeral home, a blanket and pillow in her arms. Beside a coffin, her sister sits wordless, nearly frozen in her grief. The body resting in the box is her son's. Her sister rubs at his powder-caked left temple, and begins to expose the gunshot wound that ended his life.

That intimacy defines Glass' Night Swim, forthcoming from Diode Editions in March of this year. Written between 2018 and 2021, the work offers a raw, sometimes visceral and deeply felt approach to the loss of Glass' nephew Frankie and sister Julia to suicide in 2017. It is the winner of Diode's 2021 book contest and for Glass, the poet laureate of Milford and an educator at Middlesex Middle School in Darien, a masterclass in grief.

"I don't know how I would have moved through rage without writing these poems," she said in a recent phone interview with the Arts Paper. "I really see Night Swim as testimony around suicide loss survivorship, and I find that there's a very limited dialogue that exists in the world around that. "

The story of Night Swim begins four years ago, although Glass did not start writing the book until 2018. In March 2017, her nephew Frankie committed suicide with a gun that had been left, loaded and unsecured, in the Michigan home he shared with his mother and younger sister. In the days, weeks and months after his passing, Glass mourned with her sister Julia, holding her anguish alongside a deep, smoldering anger. Then in May, Julia also took her life. It left Glass somehow moving forward in a world where she and her elderly mother existed, but her sister and nephew did not.

For a year, Glass didn't write anything at all, focused solely on keeping her head above water. In addition to her work as an educator and writer, she also has three children, and needed to care for them. She kept teaching; her middle schoolers were counting on her. There were driver's ed classes and dinner times and homework assignments that went on. There was her own journey in recovery, which Glass is open and often sharp-tongued about in the book. "Tying to function was all I was focused on," she said.

Then in 2018, she began working on what would become Night Swim (the idea of land, water and the terrain in between becomes a framing device in the manuscript). While she wrote during 2018 and 2019, she said the bulk of the book came together in the last year and a half, as the pandemic forced her to focus inward and led to a period where “I was so insulated.” For months, Covid-19 meant that she was teaching remotely. Without her 90-minute commute to school, she read more, including works by Eugenia Leigh, Ellen Bass and Rachel McKibbens that she has long loved. Nods to Lucille Clifton, Jane Hirschfeld, and Tishani Doshi are also part of the book.

The collection speaks to a specific kind of loss, using form to fulfill the necessary and infinite function of mourning. While poems are divided into the five stages of grief (denial, anger, bargaining, depression, acceptance), Glass is the first to say that the separation is meant to be ironic, because no stage of grief can possibly be as finite as a line break, a redacted sentence, a space left empty between words. There's no place where one part of the process ends and another begins. There’s no clear resolution.

In "Exit Wound," one of the earliest poems in the book, Glass describes the scene in the funeral home the night before Frankie's wake. She enters first as a narrator and then as a character within the piece, remembering her sister as the grieving mother, wiping away makeup from her dead son's face. The lines are clean, economical—describing a moment that is anything but:

The funeral director said he wouldn’t make her go
so I brought her a blanket and pillow,
put my hand on her shoulder as long
as she’d let me. We didn’t speak.

In between the lines is everything she doesn't have to say, because the words do it for her. There is the weight of multiple systems, from the National Rifle Association to the Michigan Department of Children and Families to Frankie’s school district, that have so clearly failed this young man and his mother. There are the suggestions she made weeks before, when Frankie ran away from home, that her sister never took (they later became the basis of her poem "Asking for Help," also in the book). There is the sheer absurdity of a parent having to bury their child.

Her command of the language is crisp and hard-to-stomach, and it's on the reader to stay there with her. In reading and re-reading the poem, terms like entry and exit wound themselves become strange, so much more clinical than the loss and violence they convey.

So too in "First Sunrise," written about the morning after Frankie's suicide. Using language that many of her readers may find relatable, Glass recalls moving through her morning at work, her colleagues unaware that a sweet Michigan boy who was alive 24 hours before is now dead, that the thing that ended his life was a weapon of war left in an unlocked nightstand. She writes:

As I held the book down against the glass
to scan it, a green laser lit up the room.
My hand became an alien hand,
the air, some exotic, other-worldly vapor.

But then the math teacher snapped at me
for putting the wrong color paper in tray four,
and I was still human,
oxygen filling my lungs.

There’s a sense of being there with her—how many of us have shouldered that same strange, unspeakable weight and known not what to do with it? As Night Swim unfolds, Glass weaves a time-skipping narrative of what happened to Frankie and Julia—including their before, and hers too—with an unflinching precision that jumps from one vignette to the next. She lets the reader in on her memories, daydreams, alternate universes in striking detail: the bedroom that she and Julia shared, the way her mother stands and fixates on small things, the graveyard where her nephew is buried, in a Michigan suburb named after a Heroic Age empire.

She shops for candied raspberries in the bright light of a shopping mall and ties them to a crime scene in a suburban home. She writes about depression as physical inheritance, watching for its signs to burrow darkly in her own children. Some of the most compelling language comes when she focuses on those who are left behind—because it is, in a sense, behind—still making sense of a suicide.

In "Line," arranged to look like a zig-zagging line of people, Glass delivers one of the book's most powerful poems. Her words pulse and push against the blank space as she remembers watching Frankie's peers arrive at the wake and line up to see his body. At some point, she has one foot in this real-world nightmare, the other in a dream world where drowning is possible everywhere. When she writes "When his teacher gets to the front of the line/she says he was just too good for this world.," something twists at gut level.

Glass is particularly skillful at showing how grief warps and bends a person's mind, upending both their personal and mental geography. A driver's ed lesson on organ donation becomes a revelation about Frankie's afterlives ("When we stood over my nephew’s casket, said goodbye,/his heart and lungs were already keeping someone else alive," she writes in "My Son’s Driver’s Education Teacher Talks About Organ Donation"). As she moves from denial to anger, a redacted police report challenges a reader to sort through the details of a young boy's death by absorbing that which is missing.

She walks, slowly and methodically, through the cobwebbed- and dust-covered what ifs that come, inevitably, after a person's death by suicide. She loses it eyeing the endless shelves of food in Costco, as many of her readers likely have too. In the words, she taps into something elemental—readers remember how much a family member can feel like a limb or appendage, without which a body may cease to exist.

None of the poems are easy to read and none of them should be. In 2019, the Centers for Disease Control and Prevention (CDC) reported that suicide had become the 10th leading cause of death among adults, and the second leading cause of death among youth between the ages of 10 and 34. In provisional data released last November, the CDC reported a three percent decline in suicide that still claimed 45,855 American lives in the year 2020 alone. At the same time of the decline, the rate for males ages 10 to 14 increased by 13 percent.

"Grief in loss to suicide, it's a very unique experience," she said. "It's complicated. How do you grieve somebody you love most in the world, knowing there's nobody to blame but them? How do you process losing someone to suicide when the person that died, they do it to themselves? I would love to extend that conversation and help to have the book be a bridge for other people who've lost people to suicide and haven't ben able to fully process it."

She added that she is hopeful readers will approach it "with an open mind." She doesn't yet know who her audience is—but she doesn't want them to look away.

"There's this little universe of people that are kind of invisible," she said. "Those that have survived the loss of a loved one to suicide don't really have a community. I'm hoping for a more ethereal kind of connecting, something that is more about how we cope and move to the other side."

Night Swim will be available from Diode Editions in March 2022. Pre-order it here.
The number for the National Suicide Prevention Hotline is 800-273-8255.