In Westville, An Artist Unpacks "The Waste Land" 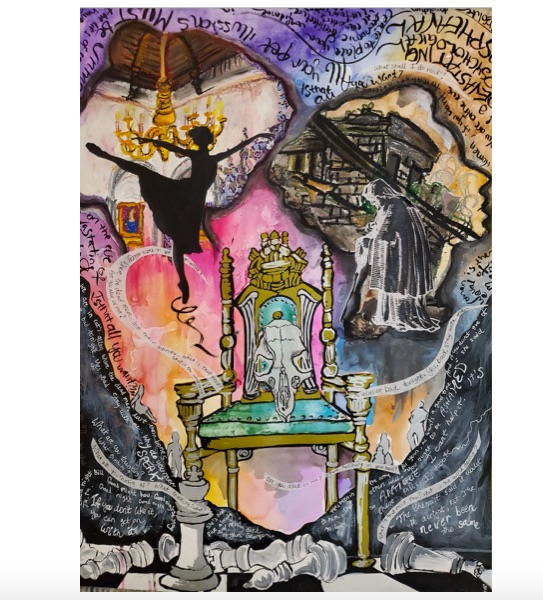 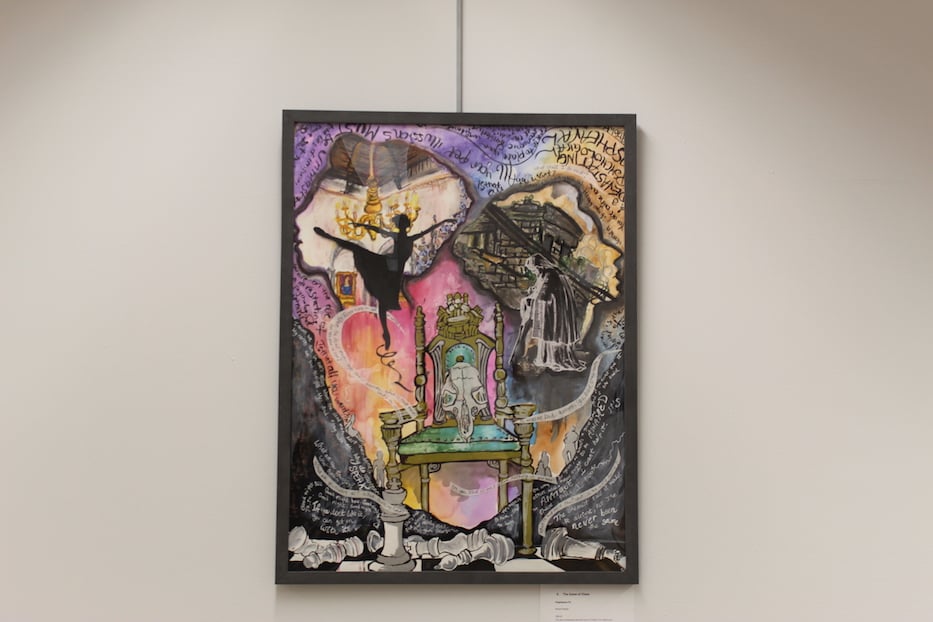 The Game of Chess. All artwork by Magdalena Fin. Al Larriva-Latt Photos.

In the far side of the programming room of the Mitchell Branch Library hangs a collage of images ensconced in text. Words wrap around the images, swaddling them on all sides.

The illustrations anchor the collage. A ballerina is suspended in arabesque, her front arm outstretched toward the center of the canvas. A classically ornate throne lies beneath the ballerina, and upon the throne sits a rat skull. At the throne’s feet, six white chess pieces splay on their sides, defeated. Only the white king piece remains upright.

Magdalena Fin’s surrealist collage The Game of Chess depicts the second section of T.S. Eliot’s five-part poem “The Waste Land.” It hangs with 10 other collages in her exhibition, The Waste Land: A Visual Journey Inspired By The Writings Of T.S. Eliot, on view at the 37 Harrison St. branch of the New Haven Free Public Library for all of March.

The project is a result of Fin’s lifelong love of libraries and the books within them. For the past years, Fin has been using illustration as a tool to comprehend complex texts. Illustration has become a means for deeper engagement with literature.

“When you’re not seeing all 20 pages of ["The Waste Land"], and you just see fragments, you understand it differently,” Fin said, making reference to the fragments of text she included in the collages. 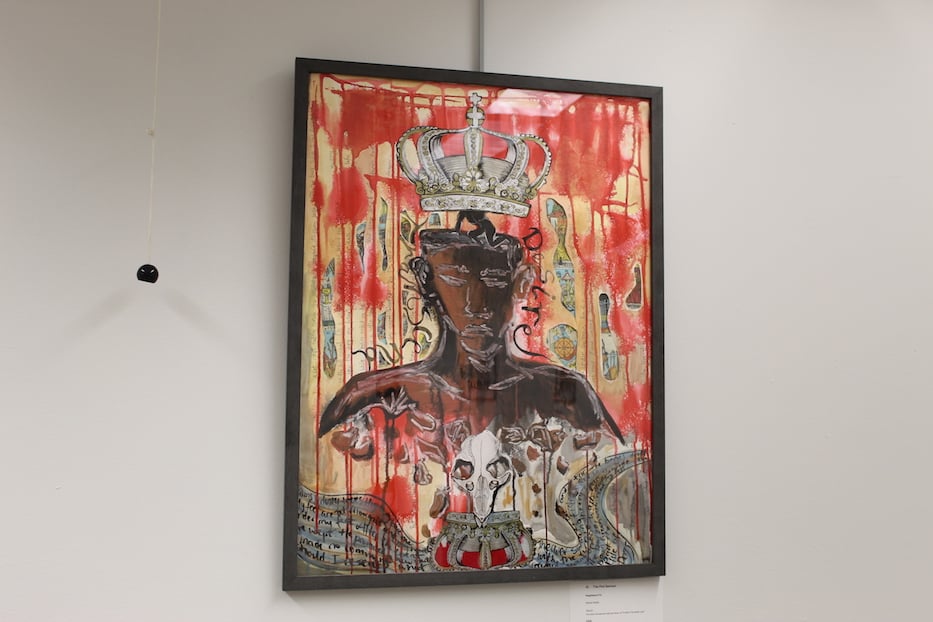 Fin chose “The Waste Land” as her source material while working on her master’s degree at Tiffin University. Eliot wrote the poem—sometimes heralded as a modernist masterpiece, and sometimes maligned for its notorious difficulty and thick web of references—during the aftermath of World War I and the 1918 influenza pandemic, which killed his wife and left Eliot emotionally devastated. In Eliot’s grappling with destruction wrought by pandemic, Fin found a corollary to Covid-19.

Fin was born and raised in Poland until she was 13. In 2005, she migrated with her parents and brother to Fairfield County. By then, she was already a lifelong lover of books. She wanted to improve her English, so she applied for a library card and started re-reading the Harry Potter series—this time, in English.

“I pretty much learned English through reading,” Fin said.

It is fitting that these five medium-size collages—along with six small studies that inspired them—should be exhibited at the library. It is even more fitting that the library at which they are exhibited was central to the artist’s inception of the works. Fin found herself using the Mitchell Branch as her primary resource of research texts.

“The Waste Land” is widely considered as baffling, filled with oblique allusions to a vast stretch of literature and culture across the Western and Eastern Canon. A key work of modernism, some versions of the poem are accompanied by well over 400 footnotes to ease the reader through its sudden and unexplained shifts. 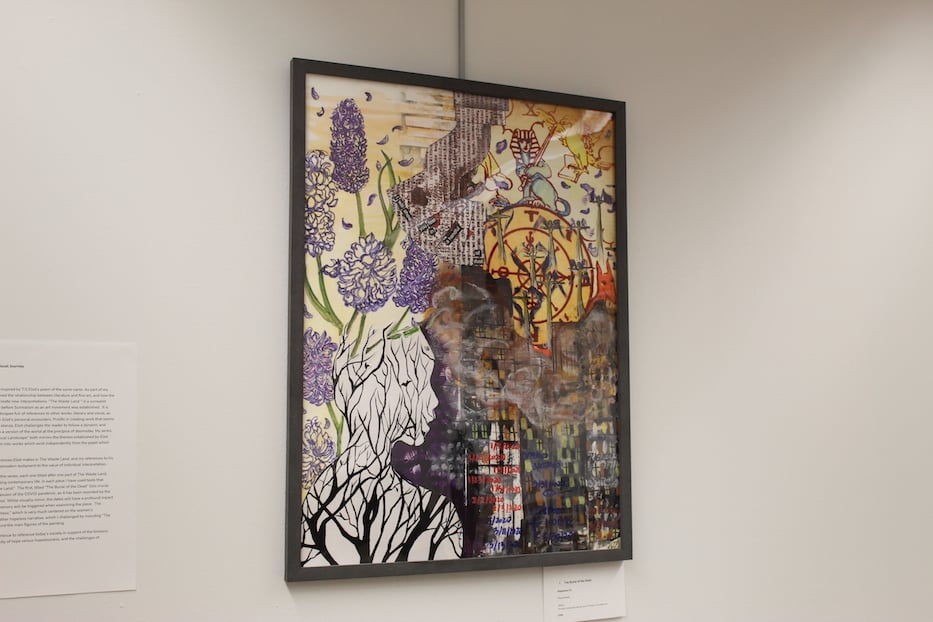 The Burial of the Dead. All artwork by Magdalena Fin. Al Larriva-Latt Photos.

That Fin’s The Waste Land is dense is unsurprising, given the density of her source material.  In her first collage in her series, The Burial of the Dead, symbols and text entangle. The silhouette of a person’s face draws the reader’s eye into the frame. Inside the silhouette, branches of a wispy tree shoot upwards and, in the background, purple blossoms bud from long green stems.

Across the canvas are a tangle of high-rise apartment buildings. The street-facing windows of its individual, isolated rooms are lit up in the darkness of the night. Wisps of gray smoke and auburn sewage drift in the wind towards the silhouette’s line of sight, tying the two together.

More subtly rendered are columns of dates and numbers. “3 million,” one reads in a round scrawl. “3/25/2020” another reads. These figures visually index the Center for Disease Control and Prevention's (CDC) timeline of the Covid-19 pandemic. The cross hatches in the windows begin to look like the crosses of Christian iconography—the windows could be gravestones. Death and rebirth, natural healing and urban decay commingle, sharing a single canvas. 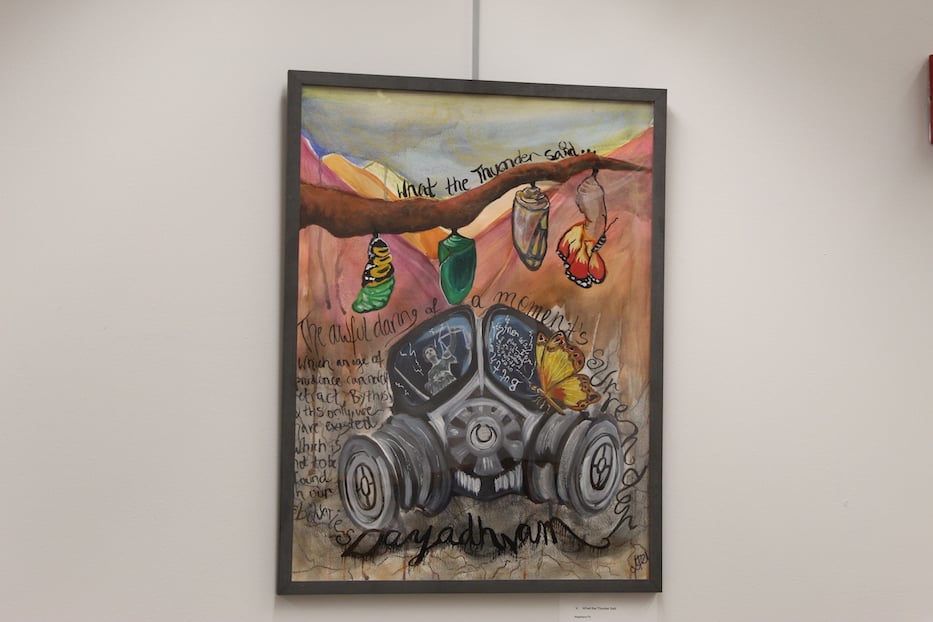 What the Thunder Said. All artwork by Magdalena Fin. Al Larriva-Latt Photos.

Fin’s thematic focus on death and rebirth comes to a resolution in the final collage, What the Thunder Said, where she uses both ominous and optimistic imagery. The sentence “The awful daring of a moment’s surrender” is scrawled across the canvas, the text wrapping around a gas mask that occupies the center of the canvas. The gas mask—an allusion to chemical warfare of WWII—is eerily reminiscent of the medical masks of Covid-19.

However, Fin departs from Eliot’s vision of total destruction. In an arc above the mask, dangling chrysalis are in various stages of transformation into butterflies. Rebirth is on the horizon. Fin purposefully illustrates a vision of restoration.

“When we look at the cycle in nature, the leaves fall and everything ‘dies,’ but it’s not actually dying—it’s hibernating and there’s a rebirth in spring,” Fin said. “I just wanted to fill in my own ending.”

Magdalena Fin's The Waste Land: A Visual Journey Inspired By The Writings Of T.S. Eliot runs at the Mitchell Branch of the New Haven Free Public Library through March 30.