In Westville, Hanukkah Banishes The Cold 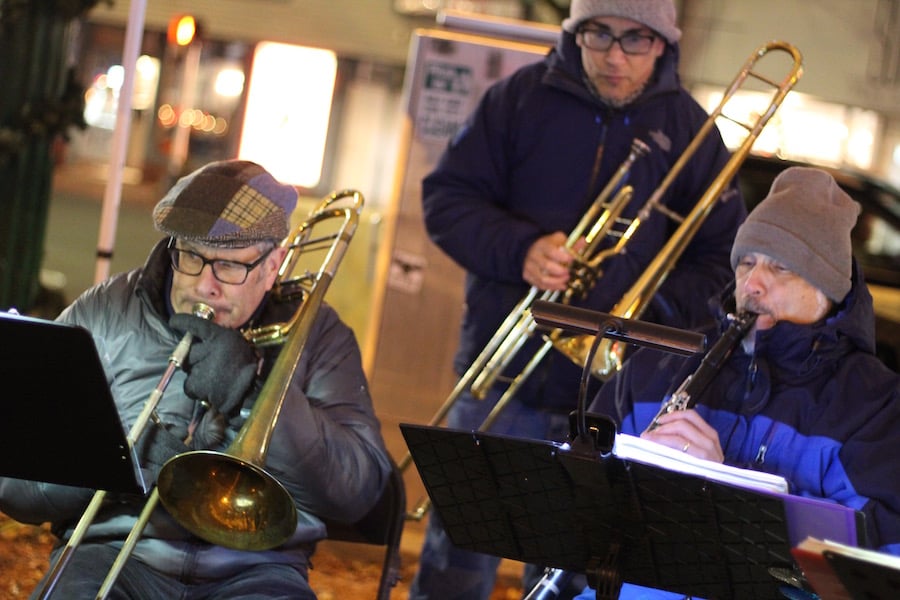 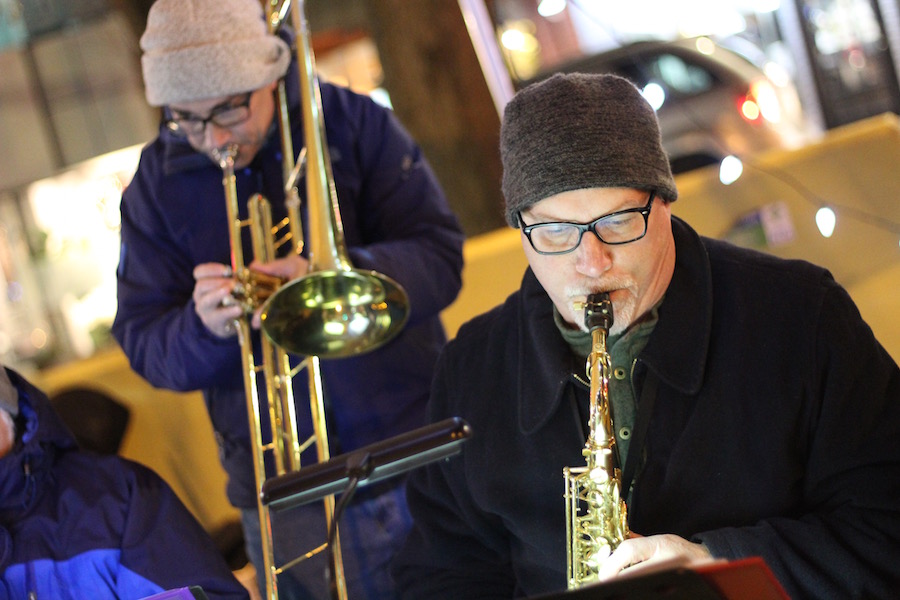 The lyrics to songs in Yiddish and Ladino had been prepared. Powdered donuts waited on a nearby table. A gaggle of students faced the street, ready to loose a blessing from their lips. Musicians lifted their horns and woodwinds to their mouths, cheeks swelling with breath.

And with the flip of a switch, five bulbs suddenly burned bright, beaming out over Whalley Avenue.

Wednesday night marked Westville’s annual menorah lighting and Hanukkah celebration in the Blake Street public parking lot, a collaboration between the Westville Village Renaissance Alliance (WVRA) and Congregation Beth El Keser Israel (BEKI), which is right up the street from the lot. Despite temperatures that dipped into the low 30s by 5 p.m., the lighting drew a small group of musicians, WVRA members and friends, and students from BEKI.

“I love the way that this community comes together and celebrates, and has music, and shares their traditions,” said WVRA Director Lizzy Donius. “I feel like we’re really good at that here, and it’s really meaningful. It makes you feel connected, and warm, and brings all of these wonderful people together in the cold. With especially the music, it’s kind of magical and lovely.”

“It’s the light of warmth, humanity, and community in a dark time,” she added. “It’s what all of these December celebrations are really all about.”

Hanukkah celebrates the second-century victory of Judah the Maccabee and his band of Jewish soldiers against the larger Seleucid army, during which they reclaimed and rededicated the Holy Temple in Jerusalem, then found a trace amount of oil that lasted for eight nights—far longer than it should have. Enter the Hanukkah miracle Jews celebrate today, beating the odds to shine brightly in unfathomable darkness. 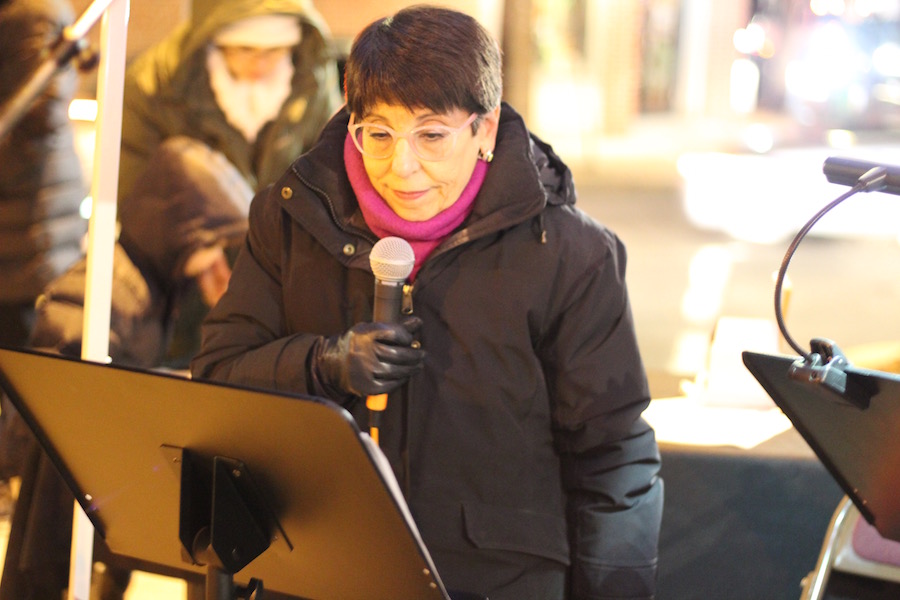 It’s complicated though: Hanukkah’s mighty hero wasn’t just fighting the Greeks, but also more secularized Hellenistic Jews who had adopted Greek customs, including wrestling and not circumcising their sons. What has now become a celebration of bright light was once a quest from the Jewish Right to get secular Jews in line, and draw them back into religion by force.

None of that history got as far as Blake Street, as clarinet rose to meet trombone and students, having blessed the menorah, rushed the donuts. At the front of the lot, WVRA members had transformed a section of curb into a stage, with a white tent and warm yellow lights. Under it, musicians Isaiah Cooper, Will Bartlett, Dalton King and Jim Berger conferred over what to play next.

A little past 5p.m., musician Hedda Rubenstein rolled in, not skipping a beat as she grabbed the microphone and launched into “Tumbalalaika.” Behind her, musicians joined in. As if heeding the song’s call for merriment, a few people began to sway and sing along. 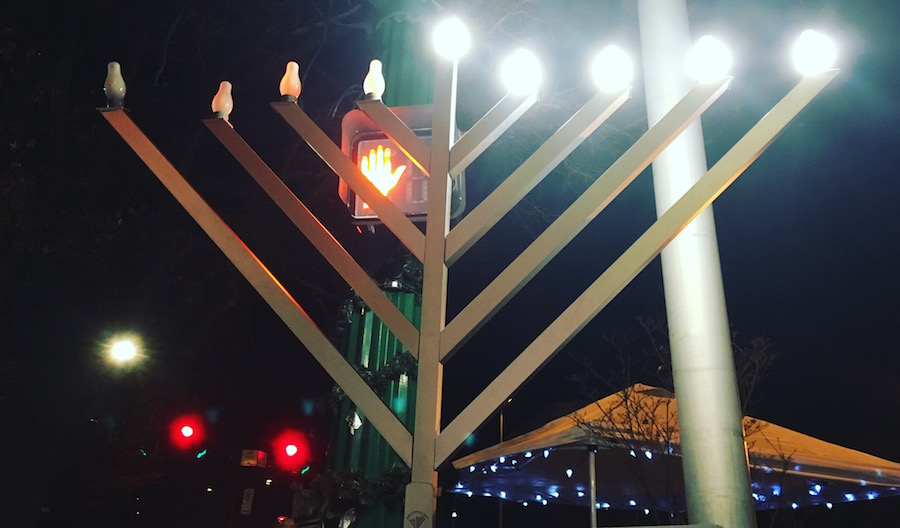 Soon, those who had stayed were moving just to keep warm. As students headed back to their after-school lessons at BEKI, a few attendees milled around, catching up as they bobbed to the band, and then swayed to a Ladino tango that Rubenstein sang with breath puffing white in front of her. She grinned out at the audience as a few attendees clapped, and stuck around to listen for what might be next.

Shoshana Zax, a congregant at BEKI who does community outreach and worked with Donius on the collaboration, said that it made sense for the two community engines to work together. Typically, Hanukkah is celebrated in one’s home—but the synagogue is so close to the menorah that bringing students felt natural.

“This time of year, every tradition has something to help us bring back the light because it’s so dark,” she said. “Hanukkah’s a time where we remember where a small band of mighty people were able to overcome a huge threat. So it’ a time to celebrate freedom and resilience, and the return of the light.”

“I’m always looking for a reason to be hopeful,” she added. “And in fact, I find this time of year more joyous than the summer solstice. I know the days are now going to get longer and that keeps me going.”

To watch more from the event, click on the video below.