In Westville, Many Donuts Serves Up Sweet Nostalgia 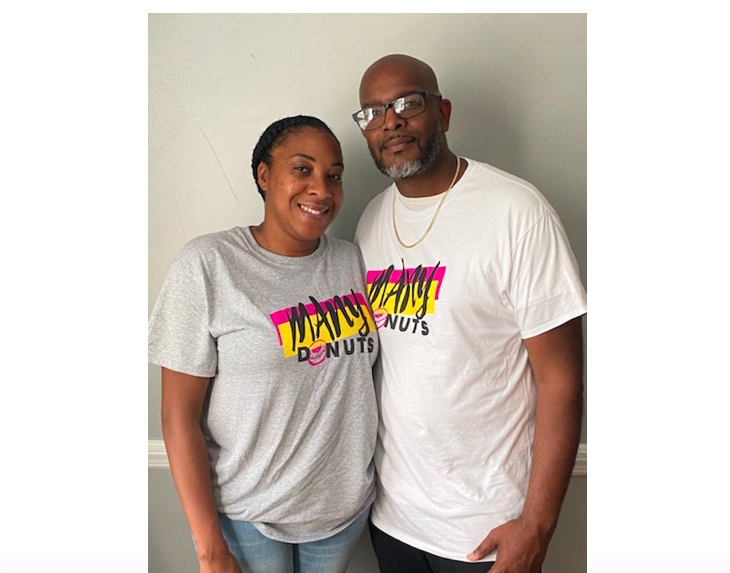 Julia Rosado Photo. The second photo in this article is contributed by Anita McLean.

The discs of dough floated down a channel of hot oil, browning as they bobbed. Nearby, an array of rainbow toppings, powdered sugar, and sweet glazes waited for them. An order of strawberry shortcake mini donuts was almost done.

Chef Anita McLean and her husband Cedric Emery are reimagining a childhood fair favorite from inside Exxon on Whalley Avenue in Westville. Their shop, Many Donuts, opened earlier this month and already has a New Haven following. Now, the sweet scent of powdered sugar has taken over the gas station as Many Donuts fries, tops, and serves up trays of fresh donuts to New Haven.

“I’ve always loved mini donuts,” she said in a recent interview by phone. “When I was a child I used to go to the Big E and get the mini donuts all the time, so that’s a childhood memory.” 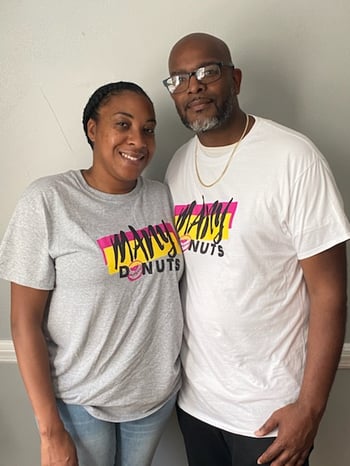 McLean  grew up in New Haven, where she and Emery still live today. About four years ago, the two decided that they wanted to try making donuts themselves, “but with several different topping options besides the basic cinnamon sugar and powdered sugar—I wanted to have different varieties of toppings,” she said.

Many Donuts didn’t start right away. After McLean purchased a donut cart and machine, the project landed on the back burner until this year. Around two months ago, they decided it was something they seriously wanted to pursue, so they began looking for a location. They landed in the Exxon at 775 Whalley Ave.

“It's unique, but it was a great opportunity for us starting our business, so we took this opportunity,” she said.

The shop soft opened at the beginning of this month, with an official grand opening on August 2. In addition to a good turnout from friends and family, McLean said that social media views “spiked up,’ which brought in another wave of new customers.

“For now, I believe our goal is just to make our audience bigger, make it known that we’re here, and that we offer something different,” she said. In the future, she hopes for Many Donuts to have its own storefront, but the current focus is to just “really get the brand out there.”

Many Donuts offers classic or ”OG” carnival flavors like cinnamon and powdered sugar, and also branches out into cereal, churro, and even a Hennessy-flavored topping. As they mingle with the toppings, the warm donuts burst with flavor and have a melt-in-the-mouth texture. Fresh off the assembly line, the strawberry shortcake mini donuts boast a gleaming vanilla glaze, strawberry crumble and powdered sugar. They are instantly, intensely sweet to the tastebuds and warm to the tongue. It’s reminiscent of another childhood favorite—strawberry shortcake popsicles.

The quality and flavor of the donuts aren’t the only thing drawing people in, McLean said. Nostalgia also plays a role in getting customers in the door. McLean and Emery see a number of older customers who also have fond memories of eating mini donuts at carnivals at and the Big E. Locally, there was a woman who sold mini donuts at the flea market on Ella T. Grasso Boulevard. While it may have been over a decade ago, many customers still tell her how Many Donuts reminds them of their childhood.

While vaccination rates continue to rise in New Haven, McLean said there are still challenges to starting and running a business in a pandemic. “We definitely missed the hardest part of the pandemic, which probably would have been this time last year,” said McLean. With New Haven’s mask mandate back in place, she keeps extra masks behind the counter and sanitizes the space regularly.

“We definitely lucked out with when we started, but who knows what the next weeks or months will bring,” she said.

In the future, McLean and Emery hope to expand to not only a storefront of their own, but also delivery and catering. She mentioned weddings, parties and private events as some of the spaces she’d like to branch out to.

“We have a lot of ideas as far as expanding our business,” she said. “We’re just a small family run business trying to succeed and bring something that we’re passionate about to the people of New Haven and people of Connecticut, so they can experience what our vision has been for the last four years.”

Many Donuts is located at 775 Whalley Ave., inside the Exxon Station. To find out more about their business, check out their Instagram. Julia Rosado is an alum of the Arts Council's Youth Arts Journalism Program working as an intern with the Arts Paper this summer. She is a rising junior at James Hillhouse High School.