Jacob Padrón Gets To Work 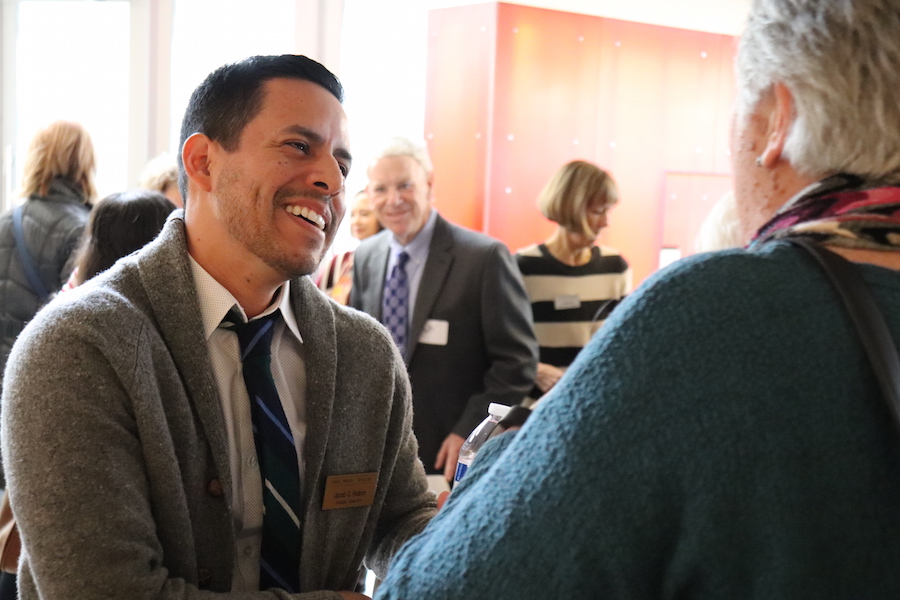 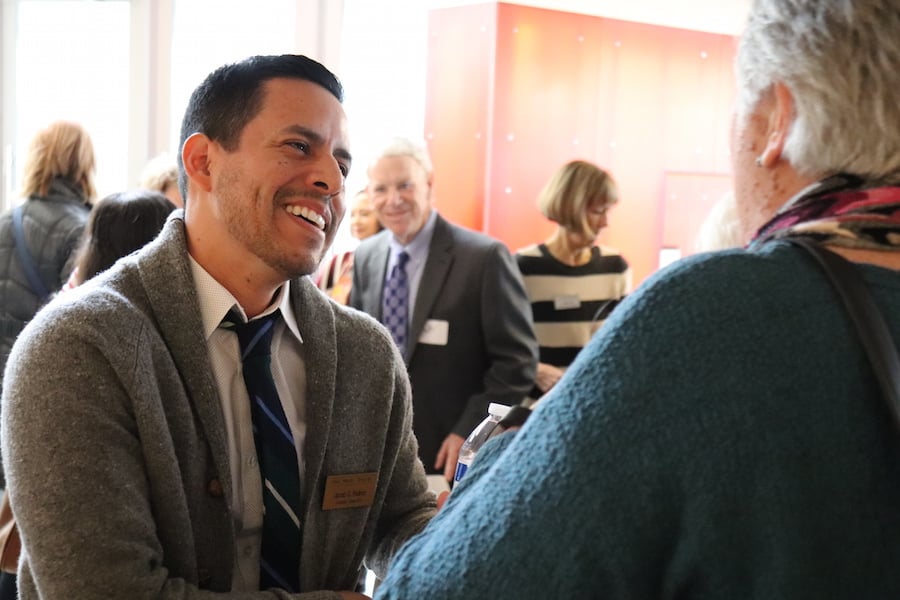 A definition of citizenship and inclusion that puts New Haven's neighborhoods on equal footing. A commitment to staff that takes their hours and hours of labor more fully into account. And a change in the way a major, historic institution leads, from a transactional to transformational model with new action at the grassroots.

Thursday morning, that message landed at Long Wharf Theatre as newly-appointed Artistic Director Jacob Padrón took the mic for the first time, in an intimate meet-and-greet with members of New Haven’s arts community and Long Wharf board and staff. Close to 70 attended the event.

While Padrón does not begin the position officially until February, he has already started defining his role at the organization, and said he plans to be between New Haven and New York multiple times in the next two and a half months. According to Long Wharf Board Chair Laura Pappano, he has also rocked at least one spin class in the city.

Introducing Padrón as “the future of American theater,” Pappano praised Padrón for his transformative work as the founder of The Sol Project, and as a champion of artists of color at the Oregon Shakespeare Festival, Public Theater, and Steppenwolf in Chicago (read more about that here and here).

“When you go through a process like this, it really forces you to think about who you are and how people see you,” she said. “And what struck me again and again in interviews and in conversations was that people saw Long Wharf Theatre as a place that championed new work. That was an incubator for young talent. And is a place to catch stars on the rise. That resonates deeply right now, because I think that is exactly what we have in our next artistic director.”

With that, Padrón stepped up to the mic and podium, and looked around the room. He set a scene for attendees: It is the day of the 2018 Midterm Elections, and a young New Yorker is walking home just a little after polls close, as darkness falls over the city. His phone buzzes, and he gets the news that’s going to change his life.

There was a cinematic quality to his recollection, like he was about to sprout tap shoes and do an over-the-top jump, or scale a streetlight in nothing but oxfords and a fuzzy grey cardigan. Attendees leaned in with open ears. Even the building, which has absorbed so much in the past year, was ready to hear what he had to say.

His full comments are below.

It’s really thrilling to be here with all of you. I’m so excited by the energy, the energy that we can all feel in this room, and I just feel so lucky that all of you would come out to welcome me so warmly this morning.

I’ve prepared a couple of remarks that I’d love to share, but I want to begin by acknowledging the land. The land that we are actually on. The land of our indigenous sisters and brothers. So I want to just take a moment and acknowledge that.

November 6, 2018, will forever be remembered as the day the universe changed the game for me. It was a little after 8:30 p.m. and I was standing on the corner of 14th Street and 7th Avenue in New York when I received a call from Laura Pappano with a life-changing and life-affirming opportunity: an invitation to join Long Wharf Theatre as its new artistic director.

Of course when I heard the news, I had to keep my cool. I was on the phone with the board chair—but inside, inside I gasped. I screamed. I cried. For this was the moment I had been working so hard to experience one day.

I’m not sure words can fully capture the gratitude I feel in this moment, but I’ll try. I’d like to start by expressing thanks to everyone on the search committee who led such a thoughtful process, and for trusting me to lead Long Wharf. I cherish the conversations we had over our three days together. Also deep thanks and admiration to Laura and [Managing Director] Josh Borenstein, who led the company through a time of transition and realignment. Their nourishing leadership have allowed all of us to arrive at this moment together as we begin to build Long Wharf’s future.

And it is a future full of excitement, full of imagination, full of possibility. We need that spirit of possibility right now. The world is on fire. And as the great theater producer Gordon Davidson once said, “theater has work to do in this world.”

I find inspiration in Gordon’s words often, because in my book he was a hero. He used theater to do what theater does best. It is a place that can bring us all together. It is a place that can hold all our stories. But we, the theater makers, are the architects of fulfilling that promise. And I am overjoyed that I get to do that hard work with this company, with this staff, with this board, and in this great city.

When I think of the most formative time in my life, all roads lead back to New Haven, Connecticut. As some of you know, I did my graduate work at Yale, and when I left to begin my career at the Oregon Shakespeare Festival in 2008, my vision for myself was still coming into focus. I knew someday I needed to reach for the moon. It was the best way to honor my ancestors, who worked in the fields of central California where I grew up.

They made sacrifices for me, so that I could have a moment like today. Sí se puede—yes we can—became my family’s anthem, and those words have lifted me through the years, and they’ll guide me through the days ahead. In the fields with El Teatro Campesino, the Farm Workers’ Theater, where I saw firsthand how theater does more than tell a simple story. Theater is joy. Theater is justice. Theater is meaningful connection. And theater is this community. And of course, theater is a really damn good musical or play.

It is time to redefine the American theater. My vision for this company is based on four guiding pillars: innovation, citizenship, inclusion, and most importantly our staff culture. All of these pillars work in tandem, and move us from a theater or transaction to a theater of transformation. With artistic innovation it’s about finding bold new ways to tell our stories, and nurturing he next generation of gifted storytellers who will make Long Wharf their cherished artistic home.

With citizenship, it’s about activating theater as a public space for civic practice, where we see Democracy in action. A place where culture belongs to everyone. With inclusion, it’s about widening our circle, so that we embrace a kaleidoscope. Our stages must reflect the communities we aim to serve. We must create theater with, for, and by the people.

And most importantly, we must take care of the people right here, inside this building, who labor day in and day out to create the magic we all see on our stages. They too are my heroes. I am committed to building and sustaining a culture of joy, of reflection, of affirmation, and of respect. I am committed to modeling a leadership of meaningful connection to the Long Wharf staff.

Dear friends, I say to you: I do not walk in front of you, I do not was behind you, I walk next to you. Long Wharf Theatre is a company with a legacy, and I hope to fortify that legacy with a firm belief that great art comes from great relationships. I hope that all of you, and the entire city of New Haven, will join me on launching Long Wharf into a boundary-breaking future.

Our success rests with all of us. We must make the path together, and work in community to shape a new American theater that shows the world that our brightest days are ahead.

And because we are theater people, I’d like to close with a quote by the great George Bernard Shaw that really captures what is stirring in my heart and mind as we embark on this new journey.

He once said, “I’m of the opinion that my life belongs to the community. As long as I live, it is my privilege to do for it what I can. I want to be thoroughly used up when I die. For the harder I work, the more I live. Life is no brief candle to me, it is a sort of splendid torch which I’ve got hold of for a moment. And I want to make it burn as brightly as possible before handing it off to future generations.”

We are on our way, dear friends. Let’s get to work.

To watch the full video of remarks, click below.