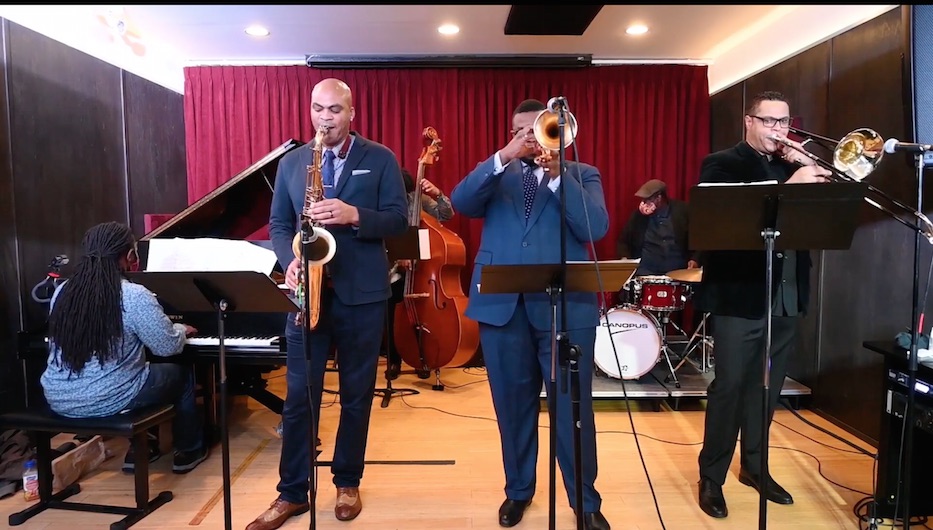 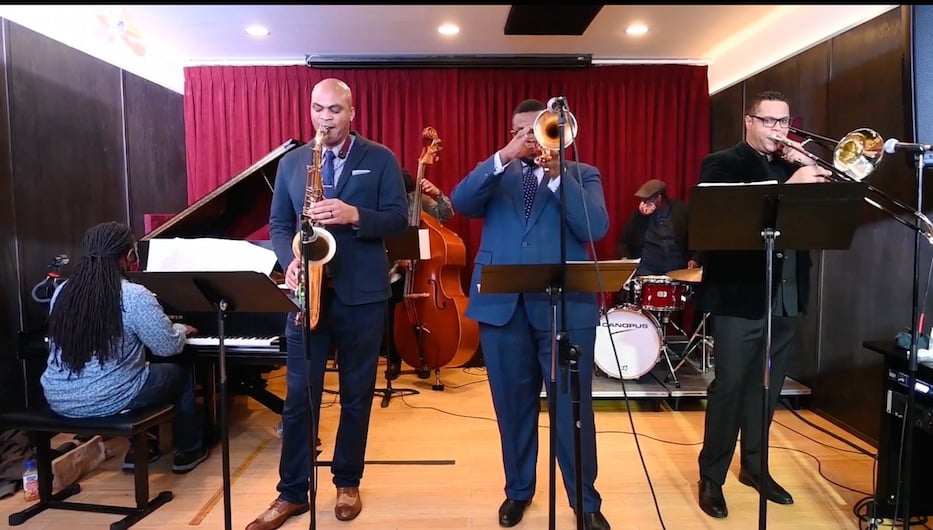 The piano started with a soothing melody almost like raindrops, as the drummer softly brushed the hi-hat. The horn section chimed in, filling the song with crescendos and decrescendos. While No Words Needed by Jeremy Pelt was the shortest song in the Black Art Jazz Collective’s set, the length only enhanced the power of the piece.

The Black Art Jazz Collective performed songs from its latest album Ascension Sunday afternoon, as a part of the Yale School of Music’s now-virtual Ellington Jazz Series. Between pieces, members of the sextet also discussed the importance of jazz history, culture, and the ongoing struggle of structural racism in music education.

Many of the collective’s members are also music educators. In between songs, they drew on personal experience, remembering when and where they’ve seen jazz face racism as both a genre and area of study. Trombonist James Burton III recalled working at an institution that received a gift of approximately $460 million. None of it went towards the jazz department.

“It was earmarked for every department, drama, dance, instrumental music, historical music, but jazz, not a dime,” Burton said.

The collective’s goal is to play jazz music at the highest level possible, members said Sunday. For them, practicing, writing, and performing the music is a form of resistance against the racism that jazz encounters. They come together to celebrate and acknowledge Black culture, Black leaders, and jazz as Black American music.

“There's nothing wrong with overtly celebrating the fact that jazz is Black American music, metaphorically celebrating Black culture,” said founding member Wayne Escoffery. “While it is everyone's music in a certain sense, and everyone can play the music, we can innovate, and now it's become a global phenomenon. The origins of the music remain the same.” 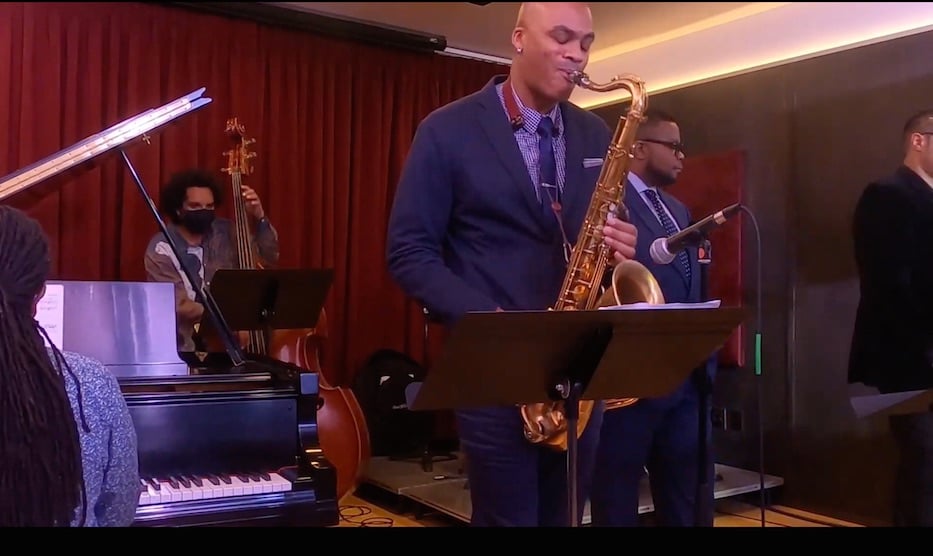 Wanye Escoffery taking a solo on the saxophone.

Tulsa is named after the 1921 massacre of Black people, and concurrent destruction of Black businesses, in the Greenwood District of Tulsa, Oklahoma. Before the massacre, the neighborhood was often called “Black Wall Street.”

Burton explained that when composing the song, he was working through his feelings about the massacre, which was largely covered up and written out of mainstream histories. He has family from Oklahoma that never spoke of the horrific event. Only recently did Oklahoma public schools add it to the state's history curriculum.

Sunday, the song started off up-tempo, lively, and vibrant. The music gradually slowed down to a tune filled with sorrow, as the musicians held deep minor chords and echoed each other. The tempo eventually picked up again, seemingly painting the picture of the cover-up Burton mentioned.

As a group of musicians and educators, members of the Black Art Jazz Collective have fought, and continue to fight, to legitimize jazz in the education system. Rashaan Carter, the collective’s bass player, said that parts of traditional jazz, such as the oral transmission of information, are often missing from jazz education programs. He reminded listeners that there is more than one way to teach and learn music.

“It’s not necessarily overtly racist, but it's a sense that in Black spaces we learn a particular way and I don't always see that translated into classrooms within secondary education or in university,” he said.

“I think in a way because of the oral transmission of information, the art could be looked down upon in certain arenas,” Escoffery chimed in. “We've all experienced that and as educators, in a variety of institutions we're always struggling to have the music legitimized.” 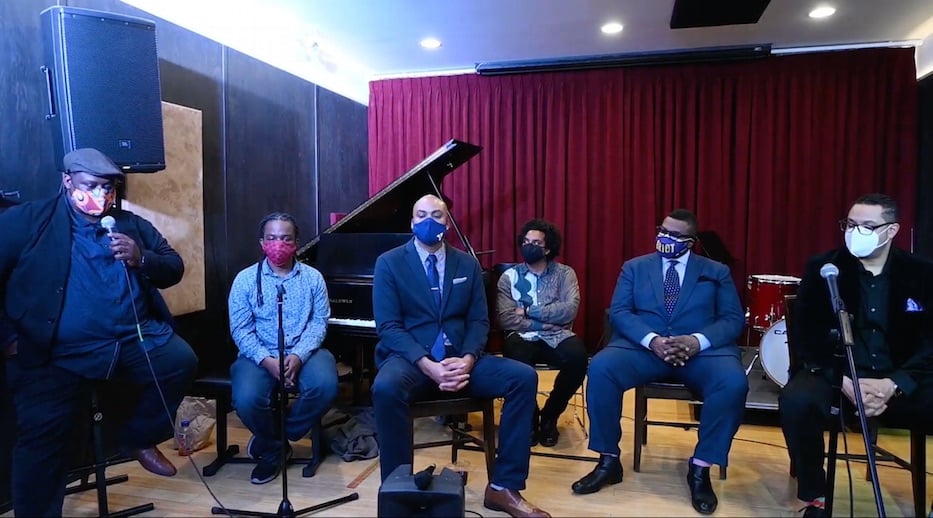 Escoffery added that there is a lot of sophistication and skill that goes into playing jazz, which is often overlooked or minimized in music education. He said he is glad to be currently teaching a jazz improvisation course at Yale, where he has the chance to teach students about the intricacies of jazz as an art form.

Members of the collective said that if jazz is taught more frequently in elementary, middle, and high schools, it has the power to both prepare musicians early on and eliminate preconceived notions about jazz. They advocated for providing people with more of an understanding and appreciation towards the music.

One of the last songs of the set was Pelt’s For The Kids, an upbeat and youthful song dedicated to the group's children. The horns took the lead, and other instruments shortly followed. They blended to create a warm melody, with bold harmonies scattered throughout the song. As the concert came to a close, Escoffery reminded viewers to keep swinging.

For more livestreamed concerts from the Yale School of Music, click here.