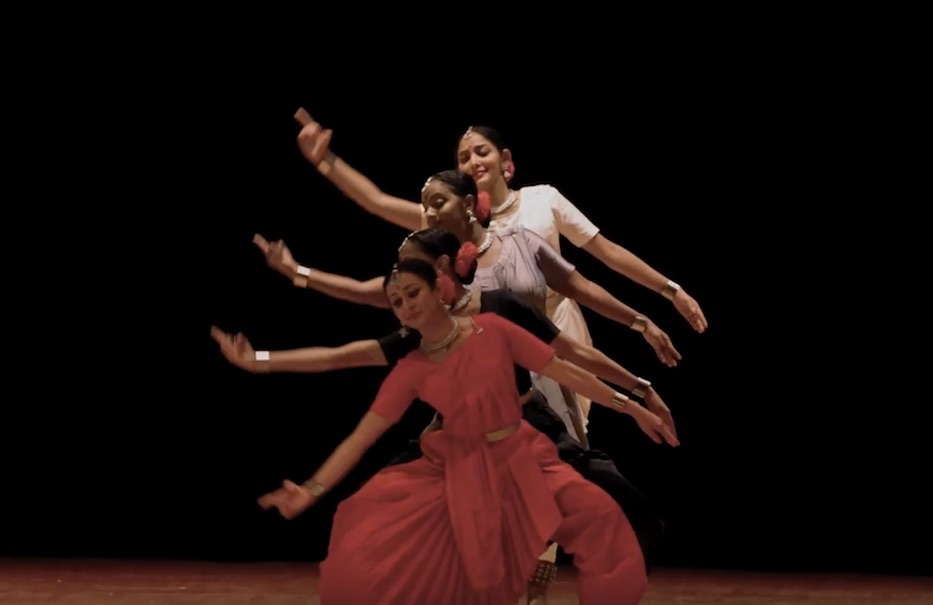 The sound of drums and classical Indian strings spread over the room as the lights dimmed to blue. On stage, a group of dancers swept in, waist and ankle bells keeping time with their bare feet as they tap-tapped across the stage. They cycled in an out, binding their bodies with an age-old story of the Apocalypse before casting it in a totally new light.

Sunday evening, that was the scene as members of Jiva Performing Arts Company presented The Four Horsemen at the Mary S. Harkness Memorial Auditorium in New Haven, located in the Yale School of Medicine on Cedar Street. Created for a New York premiere earlier this year, the performance takes the age-old story of the Four Horsemen of the Apocalypse and maps it onto four women, with a new lens that includes female experience, classical Indian music and dance, Sanskrit poetry and English narration.

It includes original choreography from Sonali Skandan and Maya Kulkarni, the first of whom is also part of the performance.

“The new work challenges the notion of Indian classical dance content and technique and moves beyond the traditional to incorporate a cross-cultural analysis of female experience,” noted the company in a blurb on the performance.

Sunday, company members Aishwarya Madhav, Sonali Skandan, Amrita Doshi, and Bharathi Penneswaran took the stage wearing four different colors—white, red, black and grey—to take on four different personae during the show. One by one, they cycled in and out, letting their fellow dancers step forward and unravel their stories through movement. In the audience, attendees sat transfixed as dancers filed off the stage, then returned to perform solo and ensemble work.

Madhav, dressed in white, told the story of a courtesan unwillingly held to her trade. As she danced, fear and sadness seemed to radiate from her body, as if she was trapped beneath a shadow that wouldn’t budge. And then, something lifted with the persistent, propulsive music: she shifted around the stage with a smile, her body open like freedom itself. The music pushed forward, and darkness descended: she looked out to the audience, conveying the realization that that happiness was only a dream.

One by one, the other dancers followed. Skandan danced through the tale of a woman losing her loved one in a war, her red garments shifting as her body moved through the space. As she took the stage, she presented herself first sitting, swaying her hands to the music as she embraced the moment of the last night that she and her husband spent together.

When she heard the news of her husband going into war the next morning, she stood with nervousness. Fear began to take over as she danced across the stage, looking through all the injured soldiers, hoping that her husband was still out there, as she held out the ring that he gave her before leaving.

In black, Doshi moved into famine, dancing her way into a tale of a mother who could not produce breast milk for her child. As classical music played on in the background, Doshi took on a kind of urgency in her movements, propelled into the desert to look for food. In the midst of her “search”—and as music continued to build around her—she began to spin continuously, as if she had been caught in a sand storm. As the sand storm calmed down, she dropped to her knees, admiring the first signs of life or food.

Taking the stage in grey from head to toe, Penneswaran rounded out this new-old life story, unspooling the story of an old woman who was acknowledging her impending death. She turned and swayed with the music, her body rising and falling as she reflected on her childhood and recalled the memories of the life that she lived, finally accepting that it was her time to go. The audience sat spellbound, as she resigned herself to her own mortality.

At the end, all four of the women came together to dance on the stage, showing how their energy could come together. Individually, they seemed to say, their suffering was inevitable. But told together, maybe their stories suggested there was another way.

For upcoming events and more information on Jiva Performing Arts, check out the ensemble’s website.