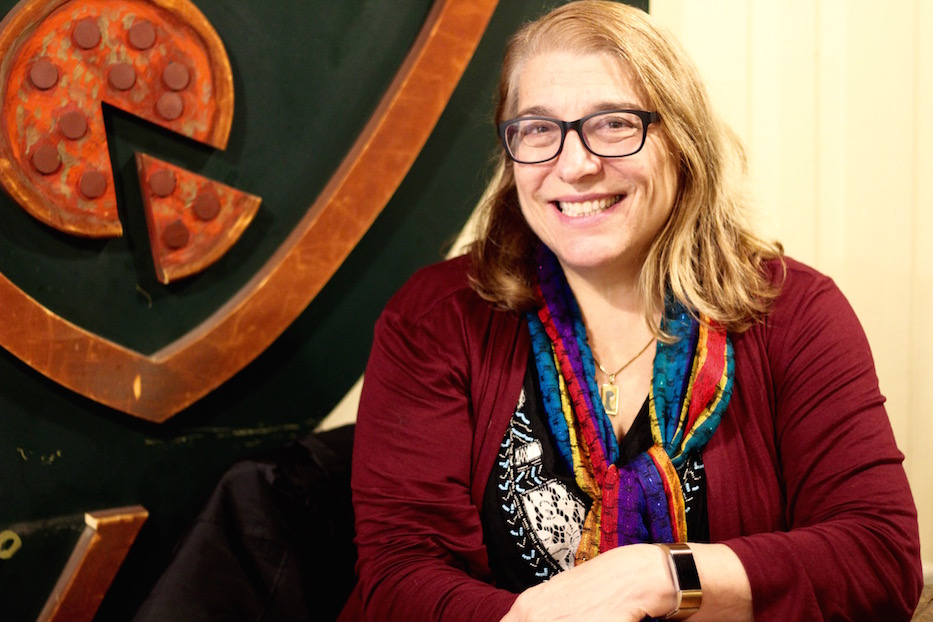 A young boy opens a magical sketchbook, and watches his father’s story bloom across the pages. A country away, a woman wheels her mother down a long hallway, and picks up the phone without knowing who is on the other end. Across a border, a teacher limps into school, and falls down an online wormhole.

The scene shifts. Fair Haven students, armed with only cameras, are dipping their hands into what it means to be a recipient of the Deferred Action for Childhood Arrivals (DACA) program in an age of Donald Trump. They are dreaming of their families and remembering Hurricane María. They write letters to the White House and see if anyone answers.

That’s all on the table for this year’s Latino and Iberian Film Festival at Yale or LIFFY, a volunteer effort run by lifelong New Havener Margherita Tortora, a senior lecturer in the university’s department of Spanish and Portuguese. The festival runs Wednesday through Sunday between the Whitney Center for the Humanities, Luce Hall, and the New Haven Free Public Library. A full schedule is available here.

“These are five days packed with mostly all new movies, all made within the last three years, completely free,” she said in a recent interview at Wall Street Pizza. “How many times do community members get to meet the filmmakers?”

LIFFY began in September 2010 as the New England Festival of Ibero-American Cinema (NEFIAC), a multi-day festival held between Brown and Yale Universities. But a few years in, Tortora’s collaborator at Brown left the university, leaving her to do it on her own. The festival became complicated: he still funded the festival, but wasn’t able to be in New Haven until a day or two before it started. Tortora didn’t always have access to the funds. She was expected—as she still is—to program everything on top of a full teaching load. In 2014, she decided to pull the plug.

“And then all the people started writing to me,” she recalled. “The fall came around, and they were all like ‘when’s the festival this year?’ Especially people from the New Haven Community. And I said, gee. What am I going to do?”

Her answer, it turned out, was to press forward for the sake of the community. Tortora grew up in New Haven and still participates in its vibrant arts community (one of her sons is the hip-hop hometown hero Ceschi); she’s seen firsthand how few free, Spanish-speaking and bilingual events exist. In 2015, she went to the university’s Council on Latin American and Iberian Studies with a request “to organize a little film festival,” getting just enough funding to scrape a festival together. LIFFY, in its current iteration, was born.

“It was very, very, very bare bones that year,” she said. “I was the projectionist. I did everything. We counted on donations from Soul de Cuba, Wall Street Pizza, and Miya’s Sushi to feed a few of the filmmakers that came. Most of them came on their own, because we couldn’t afford [it]. But some were in New York, and so we paid for their train. We figured it out.”

The following year, Tortora got a grant from the Edward J. and Dorothy Clarke Kempf Memorial Fund. The university’s MacMillan Center jumped onboard to support the festival, and so did a small army of volunteers from the community. The Whitney Humanities Center opened its doors and gave her projectionist Tony Sudol. She began to build partnerships with the community, including with students in the New Haven Public Schools (NHPS) system.

This year, she is particularly excited to expand those partnerships, including with some of New Haven’s newest and youngest residents. On Thursday, LIFFY plans to welcome 335 NHPS students and teachers to the main branch of the New Haven Free Public Library for screenings of David Maler and Andrés Curbelo’s Reinbou, the fantastical and terrifying tale of a boy who finds an old journal, and uncovers the story of war that ravaged his country and his father.

On Saturday morning, she is doubly excited for a series of short films by 5th and 6th grade “Newcomers” from Fair Haven School, who worked last year with teacher David Weinreb (he is now an administrator at Elm City Montessori) and the student group Yale Undergraduates for Unicef on a series of short films covering DACA, Hurricane María, and the separation of immigrant families. Just as the festival does with many professional directors who have traveled from out of town (and sometimes from other countries), there will be a talkback with student filmmakers after the screening.

In addition, she’s looking forward to the number of new, unexpected and political films coming this year, many accompanied by their directors. On Wednesday night, the festival opens with Cuban director Alejandro Gil’s Inocencia ( Innocence), a historical drama that tells the story of eight medical students falsely accused, locked up, and executed by Spanish colonial forces in Cuba, three years into the Ten Years' War. The film is shot from the students’ perspective, from their supposed crime of defacing a grave to their final moments alive.

“I thought it was a very good film because there are so many students here, and these are young students between 16 and 19 [years old],” she said. While the director was unable to get a visa, actor Héctor Noas will be joining the LIFFY crew to present the film.

On Thursday evening, she is eager for for Cynthia Biestek and Rubén Gómez’ 2018 Eliades Ochoa: From Cuba to the World, a documentary film and multinational love letter to the Cuban guitarist Eliades Ochoa followed with a Q&A with Biestek and animator Ian Padrón. That night, LIFFY’s political heartbeat comes out with Isla rota/Broken Island, Félix Germán’s chronicle of Rafael Trujillo’s repression and massacre of Haitians in the Dominican Republic. The film will be followed by a Q& A with producer Luis Arambilet.

Other highlights over the weekend—and there are many, Tortora said—include documentaries from LGBTQ+ communities in Puerto Rico, Mexico, and Brazil, a foray into contemporary Mexican horror and Venezuelan science fiction, and deep dives on mental health, political regimes and government misconduct, animal-human healing relationships, and directors who are making new work after years out of the spotlight.

In a coup for the festival, those include Chilean director Gustavo Graef, who will be there for screenings of his 1993 smash hit Johnny 100 Pesos and contemporary sequel Johnny 100 Pesos: 20 Years and a Day Later. But Tortora is just as excited about smaller names—she mentioned that works includinng Nina Wara Carrasco’s 2018 documentary En el murmullo del viento, which comes out of an indigenous community in Bolivia, and Paola Baldion and Jamie Toll’s I am Migration, which challenges Americans to literally study their non-white DNA, both feel timely.

As LIFFY enters its 10th year, Tortora said she still thinks of it as a festival that bridges town and gown, inviting in the community for works that otherwise might not make it to New Haven, to New England, or to the United States. While it is an international film festival with a jury and prizes (best feature film, best documentary film, and best short film), she has designed the festival to bring people in: it features opening and closing receptions with food and music and two free lunches with visiting filmmakers, all of which are open to the public.

She praised members of the greater New Haven community who have been with her since the festival’s humble beginnings. She recalled how an immigrant rights advocate and radio host and producer Luis Luna, now field director for the Working Families Party, was so delighted by the 2010 festival that he came to a screening after spending a night in jail for recording police violence on his cell phone (he was acting within his legal rights at the time).

"For me, LIFFY has been a window to the genius, resilience and creativity of our Latin American experience translated into film," he said Tuesday afternoon by email. "Through LIFFY I've met filmmakers and actors. I have discovered worlds and narratives that I never knew existed within our continent. The act itself of creating cinema, brings to light the struggles of our people to find liberation projected onto the big screen."

“It’s a way for the community to get together and do something that showcases, positively, the Latino community after so much negativity in the press lately,” she said. “And the contribution of many immigrants amongst the filmmakers.”

“It’s a way of appreciating Latino creativity and uniting Latinos from all across the board,” she continued. “We have films from all of Latin America and the Caribbean, we have films from the Iberian Peninsula, Spain and Portugal, and Latinos here in the U.S. So I think it’s a tribute to Latino creativity and our artistic genius, and also the ability to make film independently.”

LIFFY runs from November 13 through 17 between the Whitney Center for the Humanities, Luce Hall, and the New Haven Free Public Library in downtown New Haven. All events are free and open to the community. For a complete program of films and events, click here.