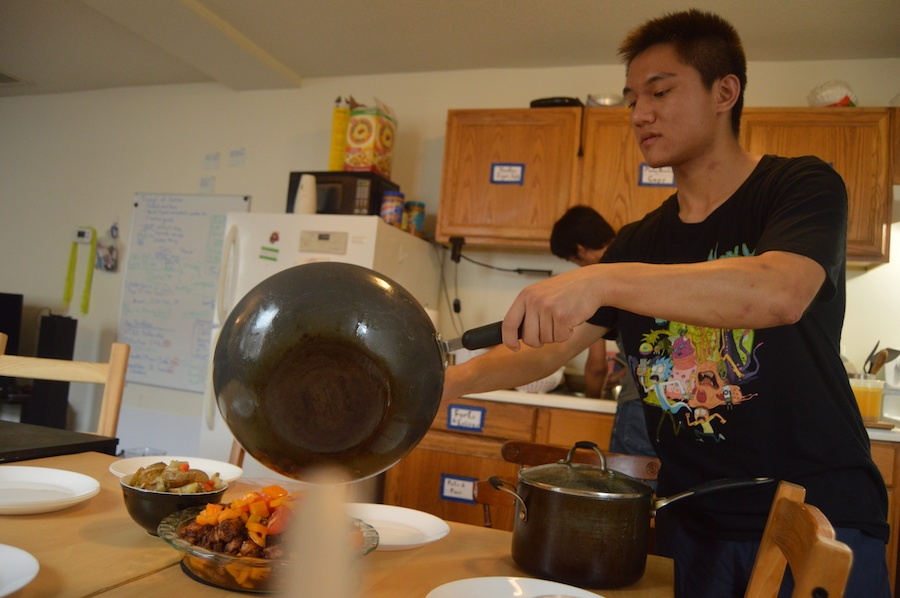 Homecooked isn't the first platform of its kind—League of Kitchens in New York is one, the international company Eatwith is another. But the program seeks to set itself aside, making sure the cook is part of the meal, and setting the price point deliberately low, at $15-25 for most meals (Eatwith runs $35 to over $200 in some cities). Earlier this month, the team launched an iOS app that lets New Haveners find and register for upcoming events on their phones, putting new dining buddies literally at their fingertips. Homecooked is also available on Facebook and through its website, where it advertises a series of monthly events.

Homecooked was born last year, a product of food-fueled brainstorming, tech tinkering, and a craving for social interaction. At the time, Kim had just graduated from the University of Chicago, where he had hosted several food pop-ups in his apartment to bring people together over food, and make some extra rent money. It was scientific as it was lucrative—Kim was studying social psychology, and realized that food played a key role in fighting loneliness that it was easy to fall into as a student or recent graduate. After the pop-ups exploded in popularity, he began talking to Zhen about turning it into a thing. The two, Zhen said, are "like brothers," a friendship that reaches back to their high school days at Phillips Exeter Academy in New Hampshire.

Since, the startup has grown into a full-time job, all of the team members foregoing salaries to pour all of their resources into it. Last June, the four received funding for Collab's incubator program, expanding the startup's reach with local home cooks during the summer months. Since, they've also received funding from Yale University, the University of Chicago, Yale Tsai Center for Innovative Thinking (CITY), and a startup competition called 1ST50K, that gives young startups $50,000 and professional development advice if they move their startups to Cape Girardeau, Missouri. Half the team now works there, in a town of just under 40,000 people.

The idea is simple: instead of sitting alone at home, eating leftover salad or pasta for the fifth night in a row, New Haveners (or Cape Girardeans) can search find dinners in their area, meeting new people as they sit down around someone’s kitchen table. While Zhen, who is a junior at Yale, said the app was designed with new and transitory residents of the city in mind, he added that he loves events where longtime Elm Citizens and students can come together, bridging a town-gown divide.

“A thousand years ago, people were having feasts and sitting down and eating at the table,” he said on a recent episode of WNHH Radio's "Kitchen Sync" program. “And I really think that even a thousand years later, when robots are preparing our food and we live in this futuristic society, that people will still eat together. They’ll still sit down and enjoy a meal together.”

“Not just the food, but the experience,” he added. “The conversation. How we can get people to interact on a human level. And in that way, Homecooked is kind of like an anti-app! Right? We use the digital world to bring you to the real physical world, and interact and engage.”

It’s something that Zhen, like Kim, has been thinking about for several years. Growing up in Miami, Zhen helped his dad manage a Chinese restaurant, stepping into the kitchen for the first time in high school when his dad broke his wrist. For the first time in his life, Zhen learned to fry rice, drying out pounds of rice with soy sauce on his hands and knees, then standing in front of a giant wok for hours on end. His life, he said, “was rice.” And when he came home exhausted around midnight each night, he started to understand food and conversation as a sort of medicine.

“I remember sitting at the dining table and being really, really tired,” he said. “And my mom [who worked at a different restaurant], she would go to the refrigerator and grab a few things, and just throw them together in a small wok on our stove. Sometimes, I can’t even remember the things she made, or how it tasted. But I will never forget putting my phone down and watching her come over, the two of us sitting at the corner of our wooden dining table, and just sharing this meal.”

“If we can embed that feeling of care, of love, of medicine into Homecooked experiences, that is something that we’re constantly … kind of searching for,” he added.

To listen to the entire episode of Kitchen Sync, click on or download the audio above. For previous coverage of a Homecooked meal, check out this article by Arts Paper reporter Karen Marks. This piece comes tin part hrough The Arts Paper's content sharing partnership with WNHH Community Radio and its longstanding news affiliate, the New Haven Independent.