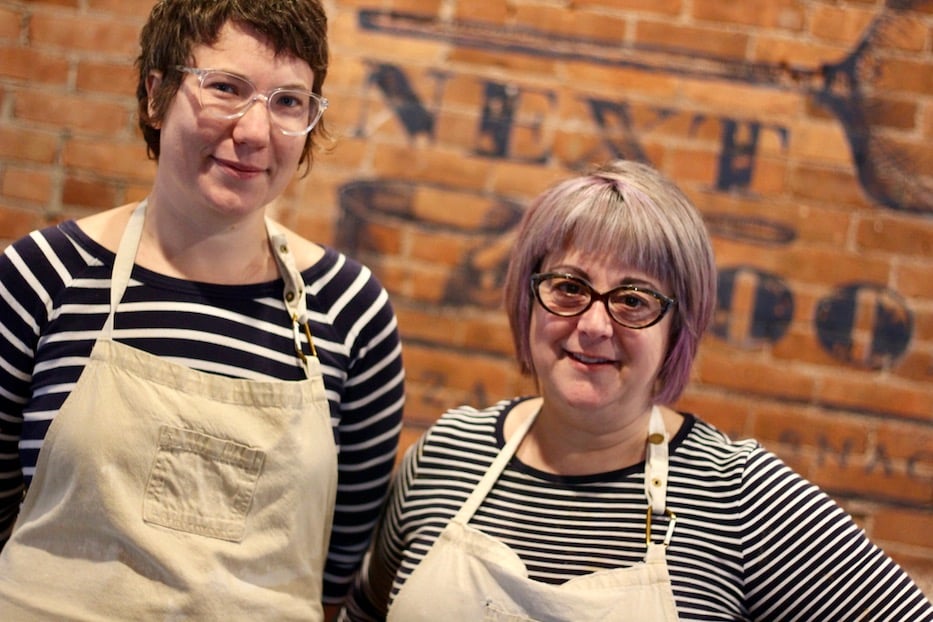 Chefs Robin Bodak and Chelsea Peterson had a shared vision: creating community around food, and food around community. Now one year in to running a kitchen together, they're doing it dish by dish.

Bodak and Peterson are executive chefs at Next Door New Haven, a still-young brick-and-mortar venture in the city's Jocelyn Square neighborhood, located where Humphrey's once stood. Last year, the restaurant—on which Bodak is also a partner with pizza guru Doug Coffin—opened as an outgrowth of Big Green Pizza Truck with an expanded food menu, restaurant kitchen, and cozy, buzzing feel of a neighborhood bar. The restaurant's pizza kitchen is run by chef Mike Zullo, who has managed to create a niche in a city already deep in pizza.

"The space here, formerly known as Humphrey's, had been going through many different iterations that weren't working," said Bodak in an interview on WNHH Radio's "Kitchen Sync" program. "We felt like it would be really great if we could come in and maybe, hopefully, have something work and give something back to the community in this area."

Both Bodak and Peterson got their start as home cooks, taking cues from their parents before branching out to behind-the-scenes work in multiple kitchens and their own catering businesses. As a teenager, Peterson delighted in reading cookbooks, trying her hand at French desserts until she had perfected a miniature gastronomic universe. At some point, Bodak saw what she was doing, and offered her a job at Big Green Truck.

Years later, the two have turned their culinary partnership into a chance to experiment for New Haven. Before the restaurant opened, they test-drove several recipes, coming up with a kitchen menu that would feel different enough from the city's glut of pizza restaurants to stand out (she did praise Zullo's work effusively). They were adamant: this would not be the space where patrons could find pizza-adjacent sandwiches and half-hearted salads.

And it worked—they found that customers gravitated toward familiar flavors, but were willing to dig in to seasoned, salty french fries, creamy hummus, vegetables ten different ways and sturdy salads.

Some menu items have flopped, said Bodak—that's part of running a new space. She pointed to an asparagus dish that "might have gotten cheffy," and was ultimately removed from the menu when it didn't sell, even though patrons still ask for it. Or a creamy, delicate burrata with mustard seeds, crisped speck and potatoes. It was a full meal, Peterson said—but eaters didn't order it.

"That's okay," said Bodak. "If you want to be successful, you have to sort of dig in to your principles and stick with it. But you also have to have that wherewithal to say 'this isn't working, we're not gonna do this anymore.' And move on to the next thing."

As they continue to build the menu, she added, they're also growing a community component that includes live music, comedy, trivia, and monthly storytelling from writer Saul Fussiner. For both her and Peterson, a rotating slate of events seemed like a no-brainer: the restaurant is a huge space that lives in the Jocelyn Square neighborhood, and straddles East Rock, Fair Haven and the Mill River District.

"How do we reimagine what it means to be a bar in a community now," she said. "Like, in this year. Because that's changed. Like, what does the neighborhood bar feel like? What does it do and what do we provide?"

They've also been up front about some of the challenges they've faced as women running a kitchen. At the restaurant, Bodak recalled, patrons have come in and asked to speak to the owner, using only male pronouns.

"I think it was here that I started to realize, it is very male-driven and very male-dominated, and that's okay," she said. "I don't think they do it consciously either. It's something that was set in motion and it's just continuing. So just to be present. I just always want to be present, and give credit to my chefs or the chefs that I work with ... so that people get the credit they deserve, and know that women can do it, and do it really well."

"I think sometimes, people think 'well women have families and children and you can't do that,' but we can," she added. "I mean, we do it better because we're used to dealing with change."

Next Door New Haven is located at 175 Humphrey Street. To listen to the full interview, click on or download the audio above. This piece is made possible through The Arts Paper's content sharing partnership with WNHH Community Radio and its longstanding news affiliate, the New Haven Independent.