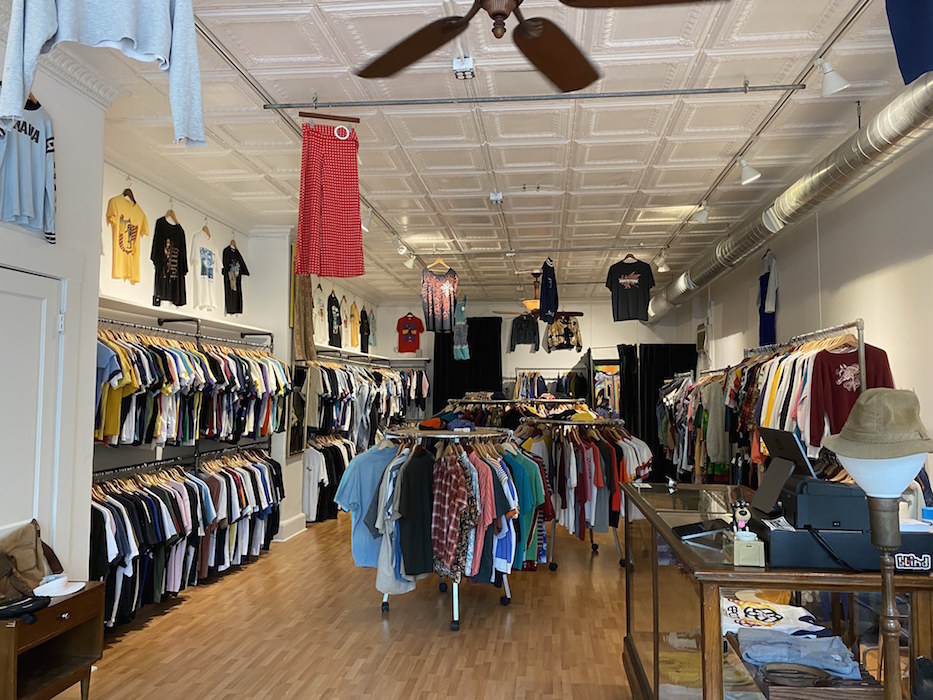 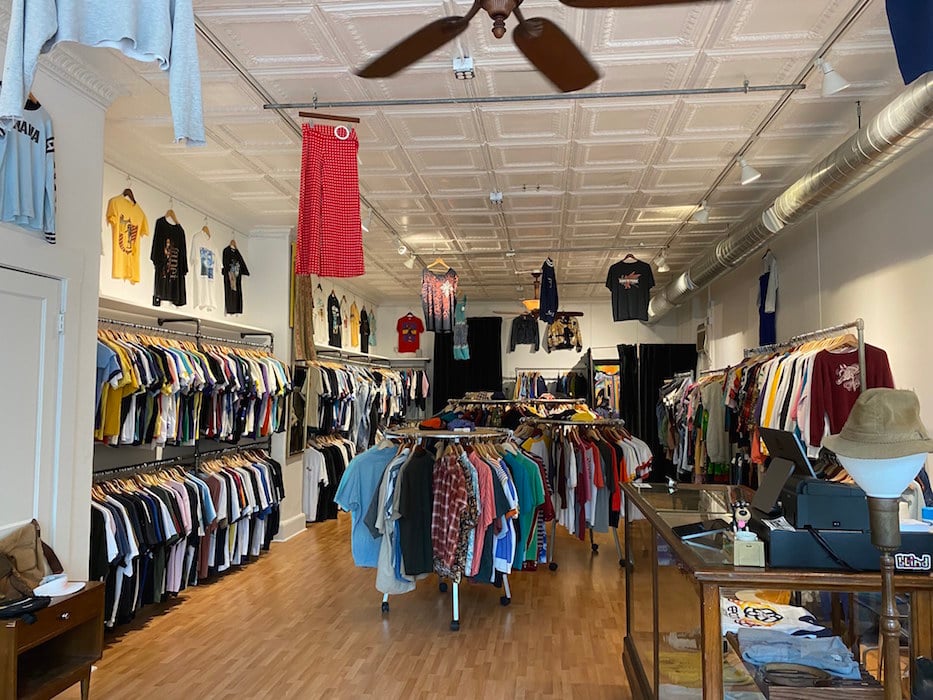 Racks of vintage tops and jeans line the side and back walls, with pieces hanging from the ceiling. A wall by the entrance boasts numerous accessories. Twin pails labeled “Lucky Buckets” by the front window allow buyers to dig through their contents and unearth various tees at a discount (one for $7, two for $10). Tucked into the back corners, one can find kids' clothing as well as a curtained off fitting room.

Adam LoPiano’s Lower Forms has seen a lot of homes. From New Haven to Providence to Meriden and back to New Haven, LoPiano has been supplying online and local vintage enthusiasts with merchandise for years.  Now, the store is back in New Haven—and in a brick and mortar space. He recently opened the shop with manager Matt Vercillo on Fountain Street in Westville.

Lower Forms started with a girlfriend of LoPiano’s who collected vintage pyrex. After buying too much of the glassware, LoPiano had to find a way to get rid of the excess. Rather than donate it back to Goodwill, he decided to list it for sale online. After he realized that glass was difficult to ship, he turned to selling clothing instead. Gradually it turned into an eBay account, a warehouse, and now the shop at 16 Fountain St.

“As with most things I do, I can’t do anything small scale, so I had to go big scale," he said in a phone call. "And that’s what I’ve done for the past 11 years or so." 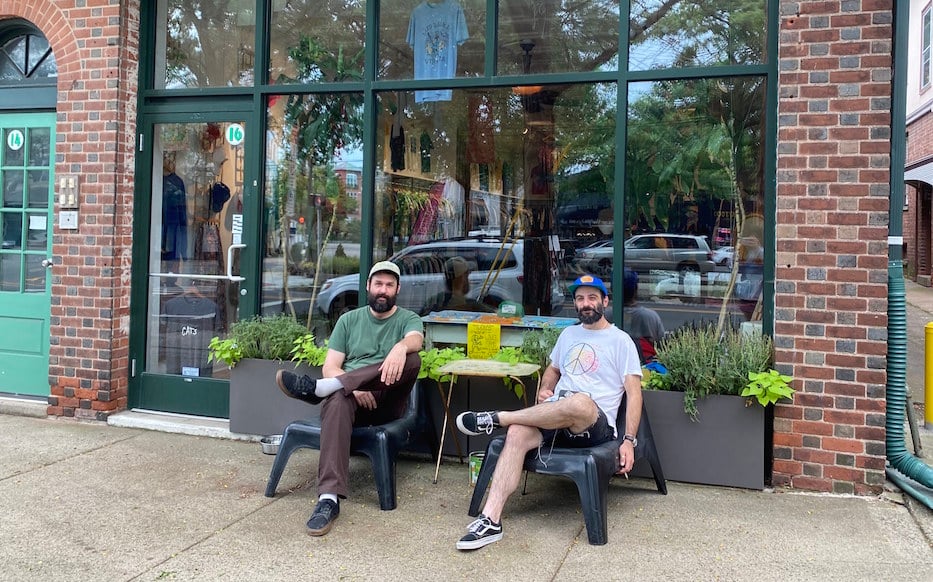 When inventory started outgrowing his New Haven apartment, he opted to move to Providence, Rhode Island to be able to live and work out of a warehouse large enough to house both him and his clothes.

LoPiano never stopped loving the Elm City though, he said. As the business continued to grow, he thought about coming back to New Haven. He decided to return to the city and add people to the organization—one being current manager Matt Vercillo. Vercillo had been picking and selling his finds to LoPiano already. After the two realized that they would spend hours just “yelling numbers at each other” LoPiano asked if he would be willing to join the team instead.

Before the physical store opened, Lower Forms was operating as an online business. “I sold on all the online marketplaces, I think I started when eBay was the only name of the game, but then there’s Etsy, and Depop and all those fun places,” LoPiano said. He later transitioned to wholesaling to stores, resellers, and private parties.

“Then it just occurred to me that maybe instead of selling to other people to sell in stores, that I should probably just open a store,” he said. Vercillo, former manager of Group W Bench and a natural shopkeeper according to LoPiano, was enthusiastic about the idea.

Although Lower Forms maintains its online presence, most of the focus is on the store. Most of the clothes it sells online are for wholesale—so it isn’t public, he explained. 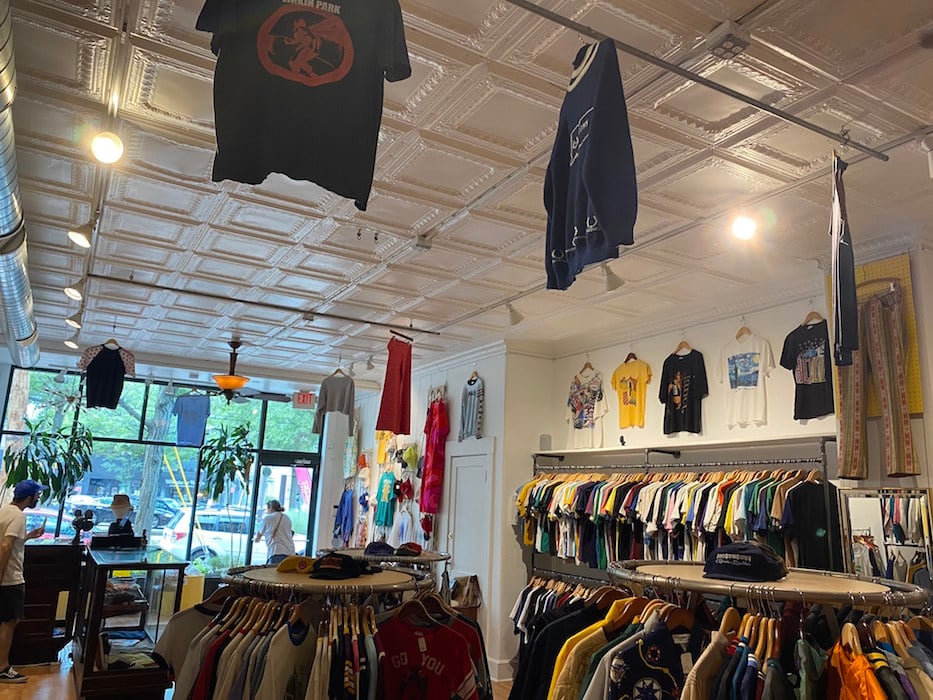 “Most of my sourcing happens behind closed doors in private parties that are just not available to people in general. I wholesale but I also buy from wholesalers as well. It’s a weird little ecosystem that’s kind of developed over the years.”

“You source in whichever way you can,” said LoPiano. Whether it’s soliciting donations, going to thrift stores and the Goodwill bins, or getting a warehouse and buying clothes by the truckload, “everyone’s got their own different style of picking, but at the end of the day all that matters is that you get something that somebody wants.”

LoPiano also credits some of the business’ growth to the pandemic. He didn't anticipate the waves of people that came out for the store's July 10 grand opening.

“It definitely went way way better than expected,” he said. “I thought it would be a slow trickle of people but that whole situation where it was elbow to elbow for two to three hours was unexpected.”

People seemed excited to get out and do things they weren’t able to do before, he said. “I would say during the pandemic it exploded, what we do online, in a way that I also did not expect. I figure that there’s just a lot of people that got into it during that time that are excited to get there and touch things and see all the things that they see but just concentrated in one place.” 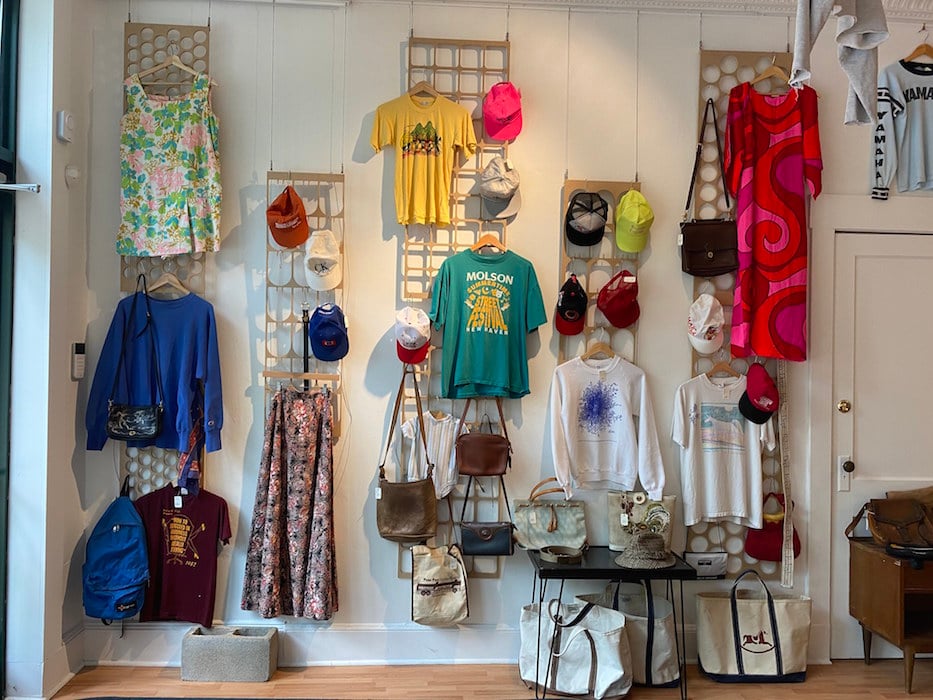 The transition to retail has been a bit strange, he added. Originally, he enjoyed doing the work “in secret”—which isn’t possible with a brick and mortar storefront.

“For the first seven or eight years I did it, people would ask me what I did for a living and I would just be like oh, ‘I just sell things on the internet,’” he said.

LoPiano encourages people to “come on down,” with no obligation to buy—sometimes it can be fun to just look around. The idea for the store, he said, was that anything new that the team picks will go to the physical location first, at the lowest price possible. That way, everyone local will get a chance to buy it.

While the store mostly carries vintage pieces, LoPiano doesn’t confine himself to a time frame of 20 years old. He enjoys folk art and low quality bootlegs, he said—things that are unique but just “hit the spot” when customers see them. He notes that he’s seen others open ultra-curated shops stocked with only rare items at high prices.

“I think that’s all well and good, but I've always just liked things that were just a little bit more interesting and affordable, a little more unique," he said. "I just think it’s more fun to sell things for eight, 10, 12, 15, 25, 30, 40 dollars than it is to sell 500-dollar t-shirts. Although we have some expensive ones, we try to keep it in the affordable range because at the end of the day most people aren’t nerds who want to collect stuff- most people want to wear things.”