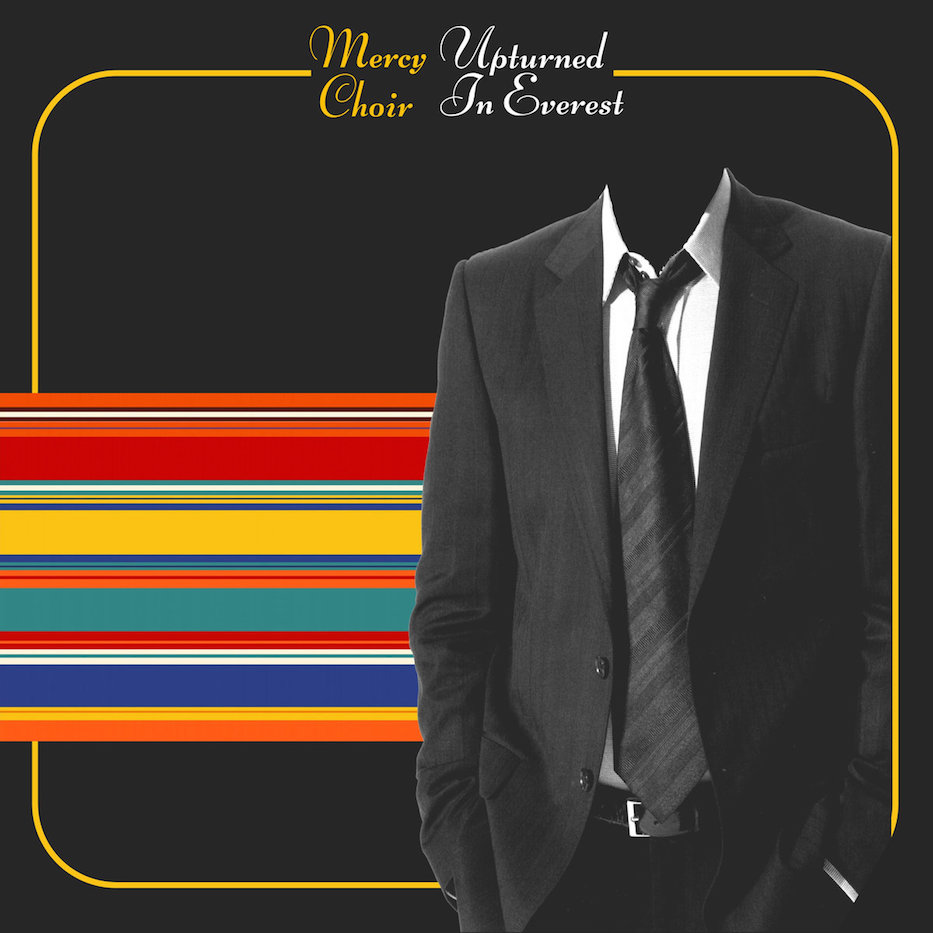 Paul Belbusti had a midlife crisis. Then he wrote an album.

That’s the story behind the tight, 12-track Upturned In Everest, which Belbusti released last week under the shape-shifting music project Mercy Choir. Recorded with instrumentals from Belbusti and Erik Elligers and additional vocals from Lys Guillorn and Kierstin Sieser, the album pays homage to Belbusti’s sonic past, while driving forward fully into his present. The album is available for streaming and purchase on Bandcamp and Spotify.

“In the past couple years, I’ve been thinking about the music I grew up on in my mother’s car, about me turning 40,” he said in a recent interview at Fussy Coffee. “A lot of my peers are dead. A lot of them didn’t get a chance to see 40. So I wanted this to be entertaining and funny, but it also has a lot of adult themes, including death. I think it’s sonically different than anything I’ve ever done.”

And indeed, Upturned In Everest is a slow, sometimes bouncy and often nostalgia-flecked ride that keeps the listener guessing, and then surprises them just when they think they’ve gotten the hang of it. Think gospel revival meets English synth pop, with a sprinkle of 1960s minimalism and moody Americana. The writing is some of the first—and cleanest—that Belbusti has done since a dive into painting took him away from music (he exhibited at Fussy Coffee earlier this year), and the listener has their interest piqued from the first note.

As he opens the album on “Mockingbird,” Belbusti opens himself to the nostalgia and exhaustion of loss, recognizable for those who have experienced it and even for those who haven’t. His voice is cavernous and trembling at the edges, painting a scene as he sings out “It’s Wednesday night, have you seen my mates?/Last time we were together was a celebration/We strapped on our guitars/And closed down all the bars/We played the angry crow/At almost every show..”

There’s a little Mercy Choir inside baseball there—the Angry Crow is a song of theirs, and it’s not the only reference on the album—but not enough to make the song alienating for listeners who don’t have it. Below him, synth and guitar are a sort of web he can fall back into. A gong breaks in, as if the song itself is a meditation. It’s a sort of modern, equally maudlin take on “Empty Chairs And Empty Tables,” with Belbusti at the center of a bar that’s completely empty, singing out his whole heart.

From that beginning, listeners can tease out references: Nick Cave, Peter Gabriel, Love & Rockets, Soft Cell. There’s a touch (or several) of what Belbusti affectionately calls “Divorce Rock,” the king of which may be Don Henley. In part, Belbusti said, those are very deliberate: he grew up with those artists worming their way through his ear canals, and has recently lost a “core group of friends” and fellow musicians who grew up bathed in the same soundwaves. Their deaths have hit him particularly hard—he recalled finding out that musician Sean Beirne had died last winter at 39, and struggling to absorb the news.

But instead of drowning vocals in melancholy, it has given the album a surprise quality of being more musically nimble than previous work from Mercy Choir. In “Do You Know What I Mean,” the second track of the album, musicians are poppy and upbeat, entirely self-aware as they address the listener from inside the track. It flows into “Dance In Love,” a classic waltz disguised a marauding, echoey game of question-and-question.

In a new move, Belbusti has bucked his own need for resolution: some songs end before the listener expects them to, as if they have stopped at the edge of a ravine and are deciding what to do next. Some wind on for much longer than the listener might expect at first listen, fusing styles as they go.

There are instrumental nods to jazz and electronica (“The Haunted” seems like a long-lost buddy to the Suite II Overture of The ArchAndroid) followed by relaxed guitar and vocals, bluesy piano and gestures to spoken word, and some tracks with no words at all.

“In the past when I would write songs, I’d be like, ‘okay, four bars, verse, chorus, bridge, coda,’” Belbusti said. “On this I was trying to let myself throw those out and kind of noodle more. It’s more atmospheric and repetitive for the purpose of letting the songs stretch out.”

It’s enough to chew on and then listen to for a second and third time. Sometimes Belbusti and the instruments are tinny and distorted, asking the listener to lean in close so they catch every lyric. Others are dirge-like and unbelievably sad after the listener isn’t expecting it, then cut with bounding joy. This is especially true of “The Muted,” which breaks from fast, rock-tinged guitar to an exhausted refrain with backup vocals, to something a bridge drenched in fuzz and funky synth.

Instrumental interludes—they’re definitely not filler—like “The Damned Look Up To Paradise” blend jazz, wailing, layered horn and a persistent bass that twangs right in time in the background. At one point in “Star Of The Show,” Belbusti has tied together his own sadness and musical cure.

The most enjoyable tracks, perhaps, are the ones that keep the listener sonically on their toes, infused with not just moody, sharp lyrics but echoey and evocative vocals, lots of synth, persistent and weird percussion and purring guitar. Behind him on vocals, Guillorn and Sieser are absolute delights, coming in right when it feels like Belbusti might need an assist, or just be feeling musically isolated.

It’s a little all over the place, in exactly the way it feels like it’s supposed to be (the production value is still super polished). Belbusti reaches, sometimes, for a clean break or bow on the whole thing—but that’s not really what this is about. Something in there tells us it’s going to be all right anyway. It is for Mercy Choir, too.

Upturned In Everest is now available from Mercy Choir on Bandcamp. On Sept. 14, Paul Belbusti will perform the album at Best Video Film & Cultural Center with Dr. Caterwaul’s Cadre of Clairvoyant Claptraps. Tickets and more information for the show are available here. To listen, click on the audio above.