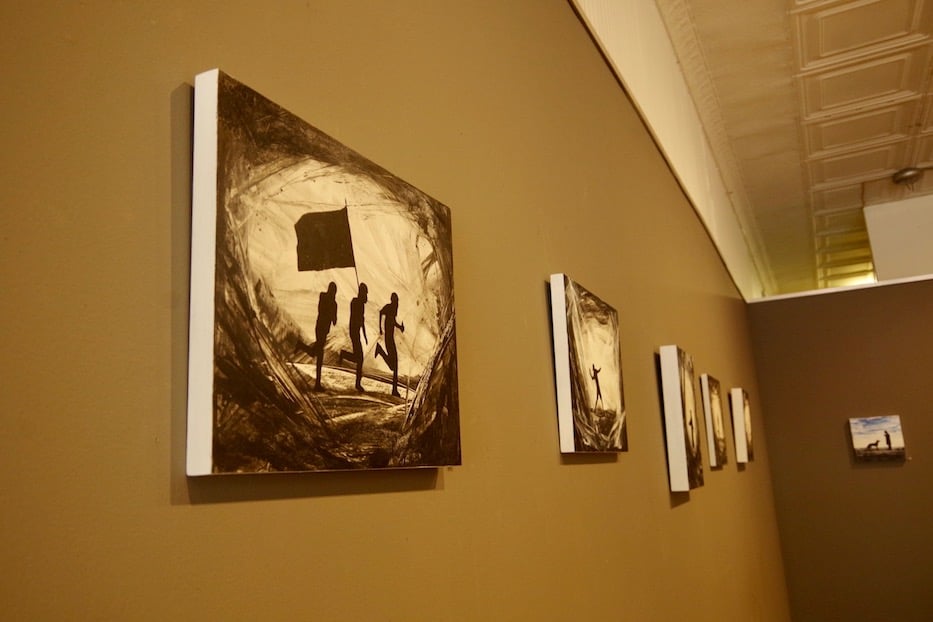 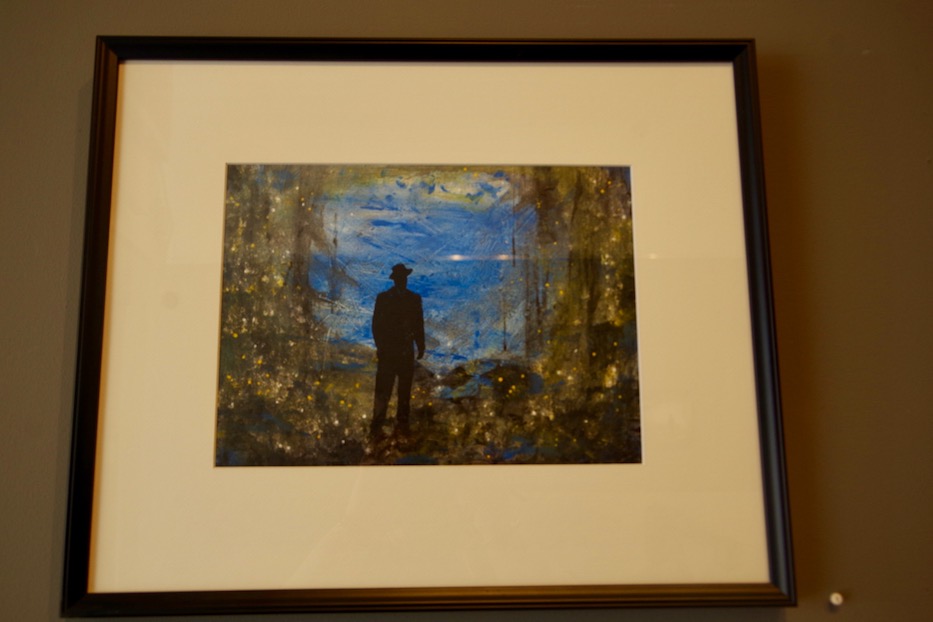 Standing among the light of fireflies is the silhouette of a man. He looks out into the darkening blue sky, surrounded by a forest. The fedora on his head is tipped to the left side and he looks as if he had just come to a sudden stop after running.

Michael Quirk’s Darkness & Light, running at DaSilva Gallery through May 30, is a collection of work that highlights the conflicts many citizens and animals find themselves in in today’s world. The pieces are filled with story and activism, galvanizing the viewer from their place in a small Westville gallery.

“Darkness and light, black and white, night and day … are universal themes and conditions that are shared by everyone,” he wrote by email last week. “It’s not for everyone. Some people have commented that it’s too dark, not enough color.”

But the pieces beckon with their sharp contrast. “Light In the Forest” reminds one of July nights that are humid and dark, but also electric with the light brought by fireflies. Installed at the beginning of the exhibition, it leads one to the idea that even in the darkest of times there is hope of light coming again.

Quirk uses acrylic paint and wood panels to create his art. He starts by painting abstract backgrounds as a base for most of his pieces. He then paints a couple of layers before feeling satisfied with the background he has created. Then he goes through his collection of iconic people, animals, robots, and various other creatures to add to the scene.

In doing so, he said in an email, he gives himself the room to comment on a wide range of current events and issues, from the environment to war to immigration and even gun violence.

One such black-and-white painting—evocatively titled “Hands Up, Don’t Shoot”—shows the silhouette of a policeman pointing a gun at a man whose hands are up. It’s palpably heavy to take in: fear and helplessness wash over the piece (and the viewer) as it depicts the terrifying and often deadly action America takes against its own citizens. 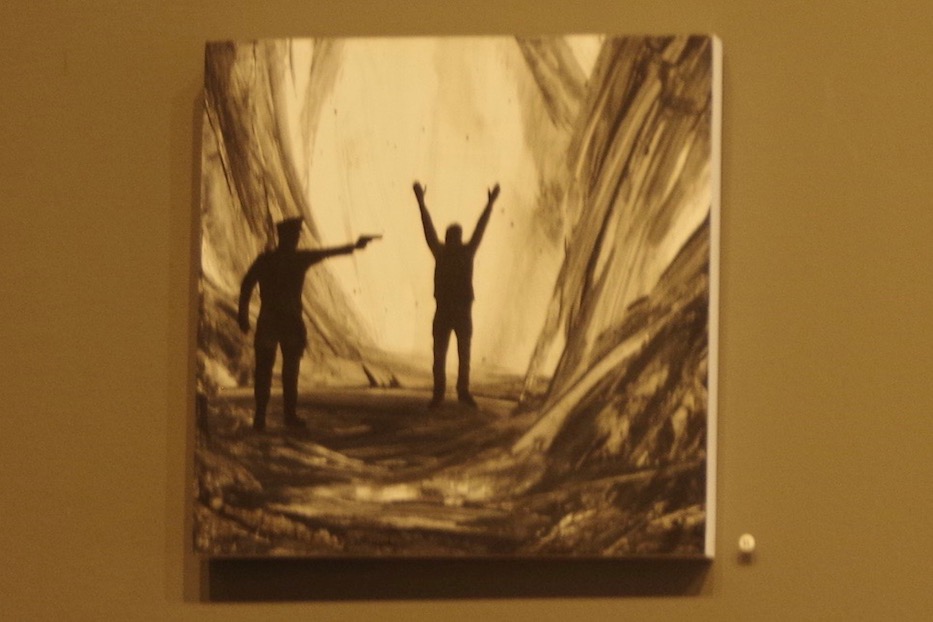 In another piece, “Businessman,” there is the same man with the tipped fedora with his back towards the viewer. He seems to be on his way out of the darkness, heading towards the light of the future. Though this piece is only in black and white, it gives a simple presentation of life and the hardships one goes through.

Throughout the exhibition, one finds themselves going through a variety of different emotions. There is the sadness, anxiety, depression that often find one in dark times pulsing on the edge of each piece and sometimes coming off it and hitting the viewer hard. But Quirk shows over and over again, with darkness comes light.

“I hope that the viewers of this work will find clarity and hope in some of these pieces,” he said. “And know that light always prevails over darkness.” 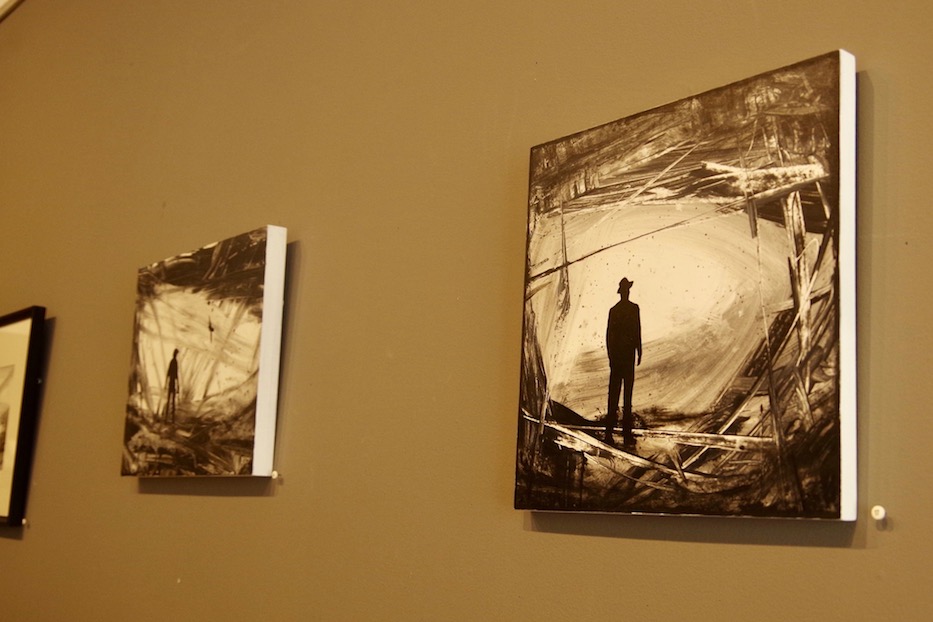 McKenzie Belisle is a junior at New Haven Academy, interning with the Arts Paper for three weeks this May. To find out more about DaSilva Gallery and Frame Shop, visit their website. The Gallery's address is 897-899 Whalley Ave.