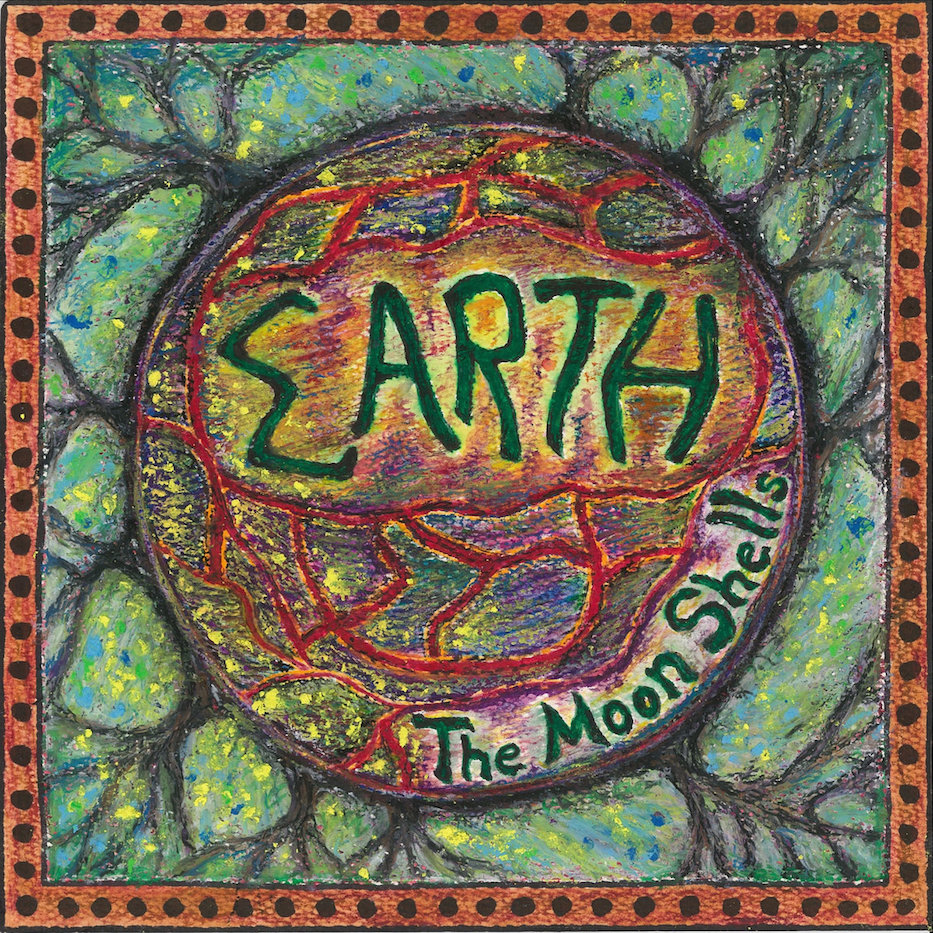 Earth is one of two albums from The Moon Shells. Cover art by Ben Wetherbee.

A guitar plays The Moon Shells in, a wisp of vocals somewhere in the distance. Percussion enters the fray almost as quickly, waiting for a voice to emerge. When Brian Slattery hops on the mic, he’s conversational, un-self-conscious. His voice is raspy at the edges, buoyant on the words “gather up the ones you love/’cause we’re gonna swing and dance to the band.”

It is an invitation to join the musicians for a while, and remember what it means to share space with each other.

“Come over to the Table” is the opening track to Earth, one of two albums that The Moon Shells dropped earlier this month on the last celebrated Bandcamp Friday of 2021. On Earth, the group showcases 11 new tracks written, performed, and recorded by the band this year. In the second, a string band album titled Screech Plank II, band members pay homage to some of their favorite contemporary musicians, including Jane Rothfield, Jeb Puryear, ​June Drucker and Dan Rublee among others.

Band members include Maggie Shar, Laura Murawski, Molly Merrett, Charlie Shaw and Brian Slattery, who is the arts editor at the New Haven Independent. The albums are available for streaming and download on the Moon Shells’ website and Bandcamp.

"I think that once we decided we were going to keep writing things [during the pandemic], it got pretty easy to sort of keep that ball rolling along,” Slattery said in a recent episode of “Arts Respond” on WNHH Community Radio. “One song led to two, which led to four, and then finally we kind of had enough stuff to record things."

In some ways, Earth and Screech Plank II feel like two intimate halves of a very 2021 whole. Both albums are extremely collaborative, with a writing process for Earth that took place largely over email and in pairs. Both have an ease to them, where a listener can crawl right in and instantly be at home. Both find the light in an upside down year and play right to it. It’s easy enough to imagine the albums coming together over multiple jam sessions, the band masked and out in someone’s backyard for hours on end.

But they also shine on their own. From the beginning of Earth, a listener is right there with the band, tapping a foot to “Come over to the Table.” The guitar is jaunty, bouncing as voices hum beneath it and come in one by one. As musicians join—“Maybe pick up a fiddle/Play as long as you’re able,” they sing—it feels like an anthem to small victories, like getting together in person without the fear of killing someone. 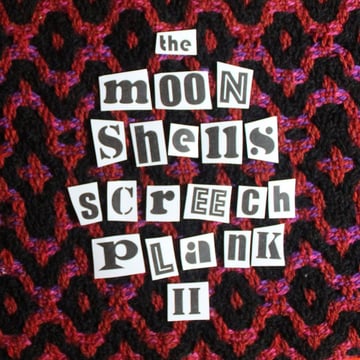 There’s a brightness that flows right through the album, folding in West African, Creole, and Cajun influences along the way. “The Lure” feels like it could be in the soundtrack to a film noir. In “Fall Away,” Shar lets her voice catch and slide, with a lilt that is bigger and more comfortable than the group’s first albums together. Strings dance into a delicious, dizzying solo as the band does a call-and-response around the chorus. That sense of propulsion returns on “Independence Day,” as percussion and strings pave the way for overlapping vocals.

The guitar and banjo in “Independence Day” alone warrant a second, and a third, and a fifth listen: they are a pumping, reliable heartbeat between vocals, and then give way to a raucous back and forth with each other. The percussion section seems as likely to contain muffled footfalls as drumming, which seems like the point.

There's deep feeling there, and a listener can nearly hear it thrumming below the surface. “Fingerprints” dips into haunting and ominous territory, like treading a well-worn path that has become soaked after rain.  With a quiet, almost polite drumbeat and melty vocals, “Long Year” is that song about 2021 that listeners didn’t know they needed—and the antidote to its constant and relentless grind.

Shar said that band members do not shy away from playing through their big feelings—or talking about them with each other—but hold onto a cardinal rule that there must be a glimmer of brightness in the mix. That comes through not only in the songs, but also in sentimental and sometimes jammy instrumental resets like “Goose Crossing” and “Catamount Airfield,” the latter of which plays out the album.

"The rule is, no matter how dark the feeling, there still has to be some light in there,” she said during the same interview in WNHH Community Radio. “Which feels like, just a good philosophy for life … especially at this time, where it's so complicated to figure out how we exist for this time in history. For me, it's a nice tangible way to explore having all the feelings, but always having hope."

Screech Plank II, meanwhile, is an homage to the field that features the work of contemporary musicians that band members have come to know, respect, and in some cases play with. Unlike the first Screech Plank, which featured historic Appalachian fiddle music, the composers on this album are very much living, and represent the breadth of the field. They include people like Jane Rothfield, a fiddle player and teaching artist who the band has come to know through the festival world.

In her “Cold Mountain,” there’s a tension that the instruments are left to work out amongst themselves, building in the beginning until it reaches a breaking point. And they do, their stringed, shrill and woody voices falling into line. By three minutes in, they’re resolved their differences and are seeing what they can do.

That’s just the tip of a well of knowledge that the band eagerly shares. In Dan Rublee’s “Smithland Farm,” miles of landscape materialize as one fiddle breaks away and sings over the others before rejoining the group. June Drucker’s “1,000 Cranes” feels like the fiddles and banjo are breathing in time with each other. A wistful, nostalgic kind of finish in Harry Bolick's “Pontoc Widow” leaves a listener waiting for Screech Plank III.

The string band tradition is close to their hearts: Moon Shells members met playing fiddle music, and jammed independently for years before forming a band and releasing an album in 2019. While Earth took months for musicians to finalize, the band recorded Screech Plank II during an eight-hour stretch on a weekend afternoon in Hamden. The album sounds like walking into a pristine jam session and sitting right down in the middle of it for a while.

“The Screech Plank albums—it feels like visiting home,” Shar said. “We just come back to this place where we started and that we always visit. And it’s like, so comfortable and easy to do that.”

Since releasing it, the band has worked to educate listeners about the composers not only through the music itself, but through their social media presence. It’s a nod to the fact that traditional music is much more diverse than it’s sometimes given credit for. It is also helping sustain them as they—and listeners—head into a second long, dark pandemic winter.

"I'm not sure what I would do without it [music], to be honest," Slattery said. "It's the thing that got me through the last year, years, five years. And really all the years, when it comes down to it.

“There's a huge debt that needs to be paid somewhere down the line,” he added. “And I don't know how to repay it."

Listen to an episode of “Arts Respond,” the Arts Council’s collaboration with WNHH Community Radio, in the video above. Download Earth and Screech Plank II here.