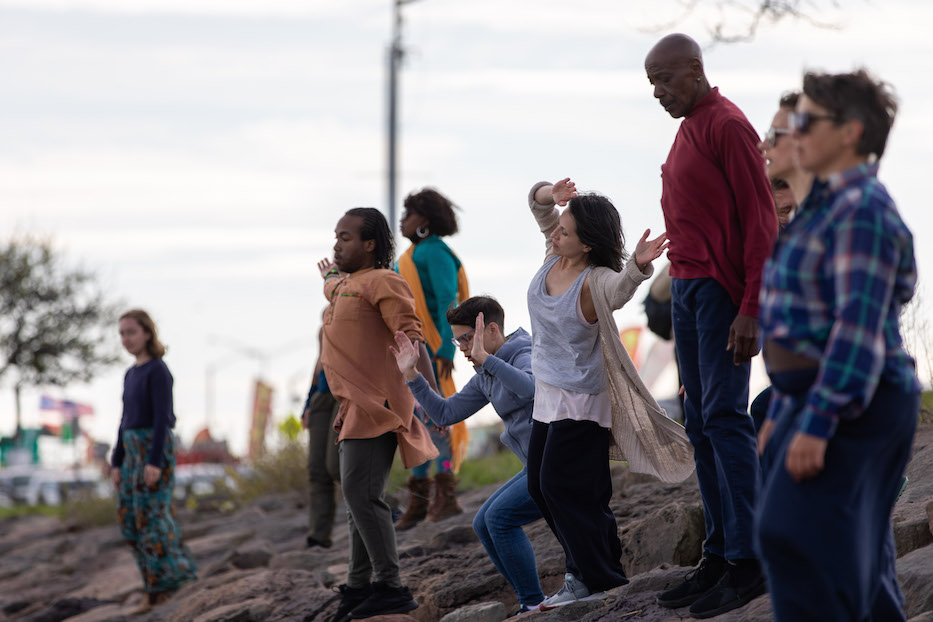 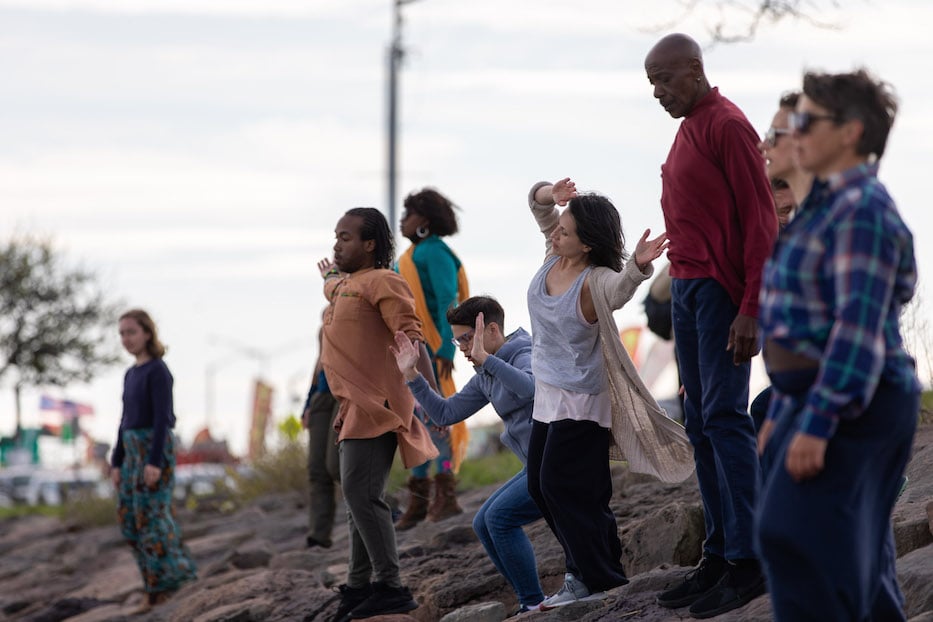 Twelve dancers stood atop three park benches. One of them swept her right arm over her head. Her left arm followed, her body turning backward with the momentum. The gesture repeated, one by one, until all 12 faced the low waves of the Long Island Sound. A chilly breeze blew off the water.

Long Wharf Pier, home to the Amistad schooner, peeked out to their left. An incessant wave of cars and trucks thundered across the I-95 highway—mirroring the motion of the Sound—at their backs. The dancers appeared encased in the long flow of geological time and in the immediacy of the present moment.

Saturday, 12 dancers performed for almost 20 minutes in the National Water Dance, in synchrony with the  100 different groups and independent artists who performed at 4 p.m. across the United States, in Canada and China. The National Water Dance is held every two years (read previous coverage of New Haven’s dance here and here). In New Haven, it is a project of the Elm City Dance Collective (ECDC).

Stretching their bodies on the shore of the Long Island Sound, the dancers delivered their gratitude to the Connecticut coastline. Their movement steeped them in the sensory beauty of the present moment, reinforcing their interconnectedness to the earth.

“What connects us to the earth, really, is this body we live in. You know, we’re here and present,” said dancer Claire Cody, a Yale PhD student. .

The Elm City Dance Collective (ECDC), led by Co-Artistic Directors Lindsey Bauer and Kellie Ann Lynch, celebrated the National Water Dance in 2018 at Lighthouse Point, and in 2020 at the Mill River in East Rock Park. Due to Covid-19, Lynch and her elementary school-age daughter Wilhelmina danced as a duo, without the rest of the collective.

This year, the 12 dancers included both professionals and non-professional dancers. It took place after an hour-and-a-half clean-up with Save the Sound, and was funded by the New England Grassroots Environment Fund, the Regional Water Authority, and the Community Foundation for Greater New Haven.

They rushed from the benches onto the grass, where they fanned out into a line. Architecturally, they moved as a unit. Then they diverged, winding their arms around their bodies, wrists loose and flowing. They corkscrewed, gyrated, and whirled. Their upper-body-focused motion evoked a collection of sea anemones, swaying beneath the current, each tendril oscillating at a different pace. This balance between individuality and collectivity mirrored their costumes—flowy, tight, bright, earth-toned.

West Havener Wesley Yarbor, a former dancer with Alvin Ailey Dance Company, executed a complex sequence of gestures. He raised his biceps slowly until arms ran parallel to the ground, outstretched like wings of one of the many seagulls flying overhead. His arms lifted skyward, then transformed, sailing in front of his body, hands clasped, to mimic the point of a diamond. For a split-second, he appeared to be diving. 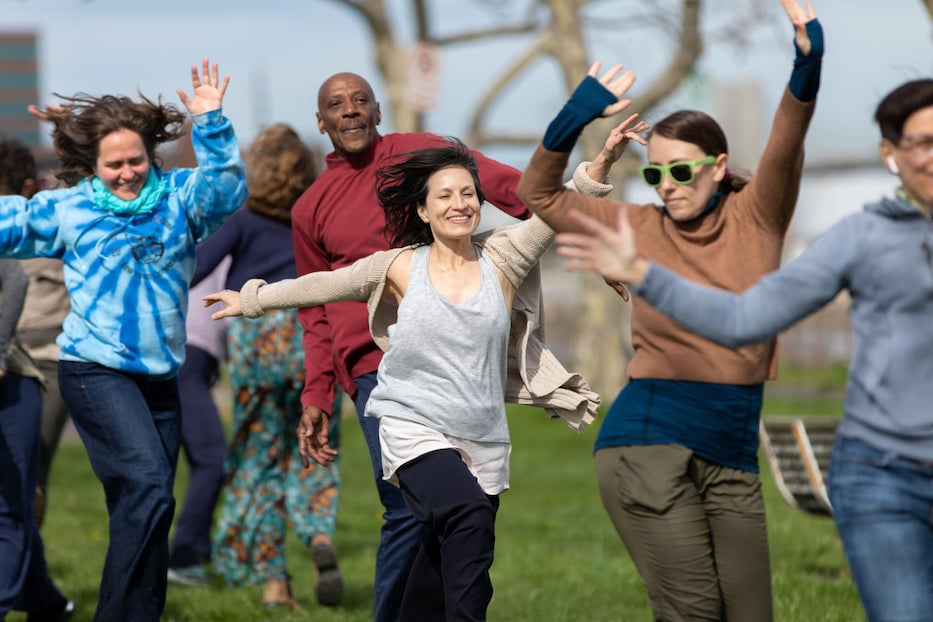 To his right, Emily Coates, Yale professor and creator of the Yale Dance Lab, wheeled in a circle, knees rocking forward at alternating rhythms. She patted the air with quick, economical motions.

Except for a choreographed beginning and end that National Water Dance participants across the United States, Canada, and China shared, the New Haven dancers’ individual gestures were entirely improvised. Their gestures sprung from two sources: a thank-you note to the Long Island Sound each had written and a personal memory that involves water.

Nikki Lee, who co-led the dance, drew from two linked childhood memories. Growing up in rural Gloucester, Rhode Island, they spent countless hours clearing vegetation from the bottom of the local pond. Then later, as a teenager, they and their first boyfriend crept onto the same pond, a plastic blue canoe on their shoulders. In the privacy of the canoe’s hollow body, they kissed as water pooled around them.

Lee broke from the group. Forearms raised over their shoulders, at first their steps were small, and then they grew in size. Several paces away from the group, their back straightened and they thrust their arms above them. 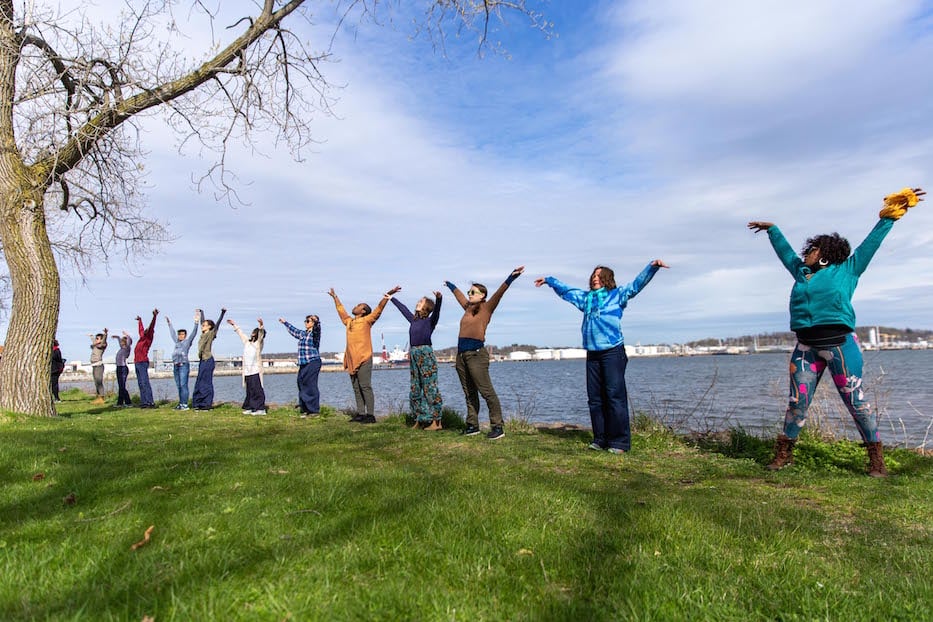 For Lee, the beach clean-up before the performance added meaning to their movement, reinforcing their shared responsibility for our water’s fate.

“I picked up like 200 cigarette butts today,” Lee said. “I was just thinking ‘Wow,’ this is for all the cigarette butts I used to carelessly throw out my car window, you know, before I knew better. I’m doing my penance now. It was just humbling to me. I made this—I made this mess. And now I’m picking it up.”

The dance began to climax as the dancers closed in on the Sound. Arrayed in a line, they toed the heavy rocks that lead to the water’s edge. As water lapped onto her rubber-soled boots, Cody bent down, the knees of her baggy pants hovering inches from the sand. Her outstretched hands dipped into the water, tracing eddies into the surf. The moment lasted.

This was Cody’s third time participating in the National Water Dance. Her first was in 2018, on the banks of Lake Storey in Illinois with a group from Knox College. She participated again in 2020, this time on the back deck of her house in Wooster Square. Unable to perform with a group due to Covid-19 restrictions, she shared her dance via livestream.

From the rocks, the dancers had originally planned to stride onto the sand bar and dance at the water’s edge. But nature’s whims foiled their plan. As they descended the rocks, the surf all but covered the sand. There was a sliver of exposed sand to dance upon.

Nonetheless, Cody was totally immersed in the moment.

“What I was actually focused on most was the breeze. The wind,” Cody said. “What I did today was a very personal experience of just being in my body, being in the moment, and connecting to the earth.”

ECDC’s next event is the Trans Body V project in October 2022, in collaboration with the New Haven Pride Center. Follow Elm City Dance Collective on Facebook for updates.