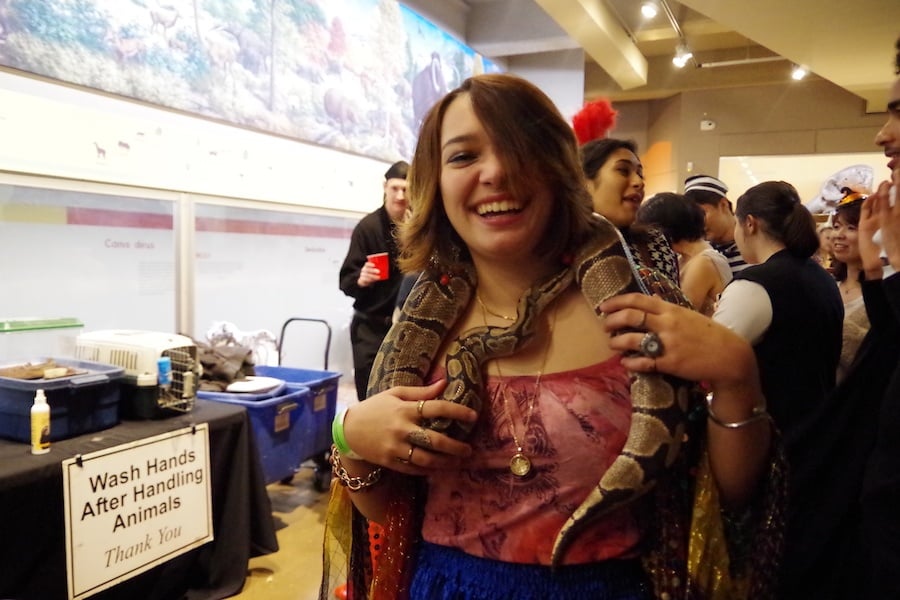 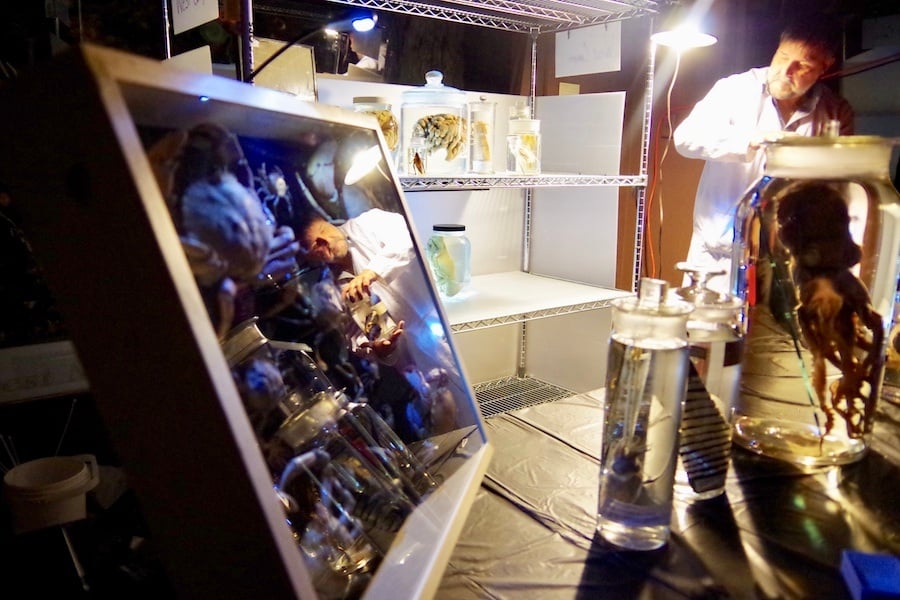 Costumed guests were gathered two and three deep around “Dr. R Achnid” and his table full of creepy crawlies. Two friends dressed as twin Waldos stared up at the preserved arm of a giant squid, snake-like and covered in suckers. Dr. R moved on to the next jar.

"Here’s a beautifully preserved tapeworm taken from a Yale student in 1896,” he said. He launched into a story about a group of students that ate bad beef and “all got wormed on the same day.”

The Yale Peabody Museum hosted this celebration of all things icky as part of their fourth annual Haunted Hall and Costume Ball last Friday night, drawing some 600 attendees from the Yale community and Greater New Haven.

The event included a mad-scientist themed haunted house and a petting zoo for grown-ups, as well as drinks and dancing. Party-goers came out in full Halloween spirit, wearing costumes that ranged from a (Wo)Man-of-War jellyfish, to the New York City subway, to a human s’more. 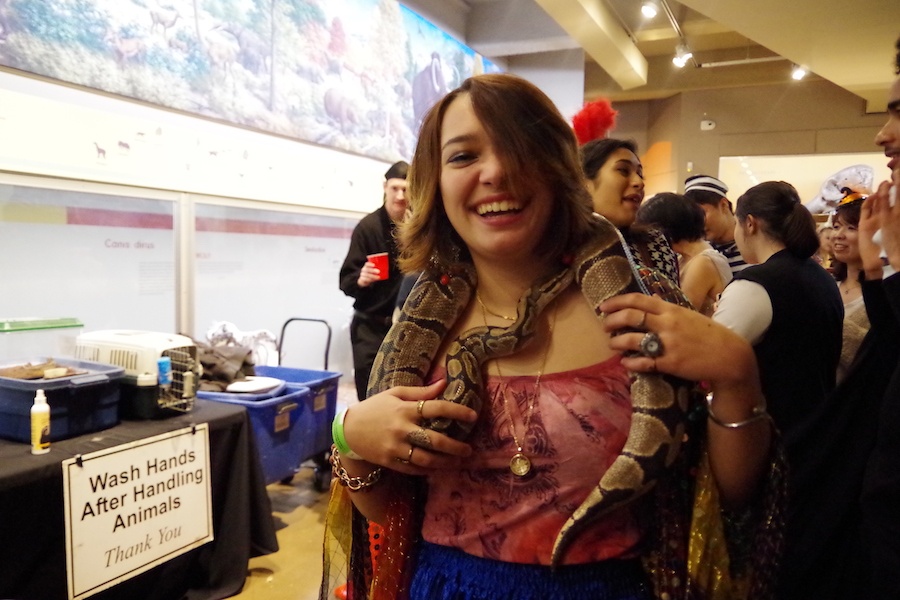 Just across from the main entrance, a large, temporary exhibition hall became a dance floor, while snacks and libations were served in the Great Hall of Dinosaurs. But the real action began in the Hall of Mammalian Evolution, which Curious Creatures of Branford filled with a passel of live reptiles and one token chinchilla.

Ariel Unger queued up for a rendezvous with the python. A New Haven resident, Unger works at a pet store that specializes in reptiles, and she chatted with handler Ron DeLucia about which snakes can be companions and which will eat each other if kept in the same cage, before draping the friendly python around her shoulders like a scarf.

Behind her, attendees were taking the elevator up to the third floor, where the haunted halls were shrouded in darkness and glowing with spooky lights. That’s where Dr. R Achnid had set up shop, surrounded by crab exoskeletons and a deep-water octopus floating in a jar. By day, Dr. R is Eric Lazo-Wasem, senior collections manager of invertebrate zoology. He said he is insane about his job.

“I get to play with stuff all day,” he told attendees with a shrug and a grin. 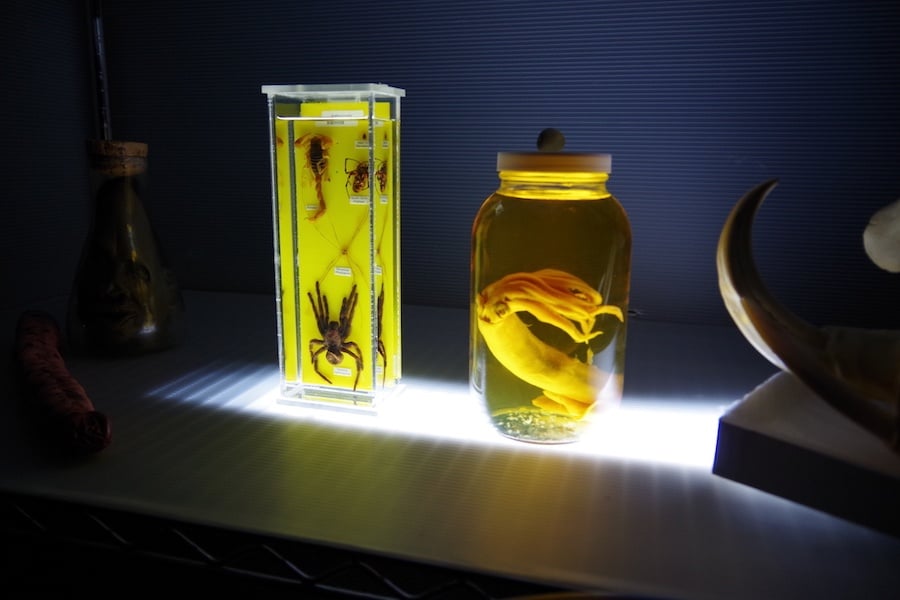 “We have millions of specimens and most of them are not seen,” Lazo-Wasem added. His department jumps at events like this where the public can have a chance to view their treasures.

Lazo-Wasem was proud to show off the Antarctic bristle worm—that thing with “big jaws and golden spines”—that he personally collected in 2012. He was part of a voyage to evaluate fisheries for commercial use and his job was to identify the by-catch, though he also used the opportunity to collect a series of specimens for the Peabody.

Party-goers were rapt with attention as he recalled the story and Lazo-Wasem soaked it up. “It was really nice the way so many people were enthusiastic and interested,” he said in a phone call on Saturday morning. “Sometimes you’re standing out with specimens and people walk by and casually look in the jars, but they’re not going to ask a question.”

Friday night was different, and it reminded him of “his old lecturing days,” when he would trot out the most fascinating of his pickled creatures, trying to astound the non-science majors that wormed the seats.

“You start to feed off the crowd when they get interested. Every time I pulled out that arm the cell phones came out,” he said, referring to the giant squid appendage so popular that night.

But people were after answers as well as pictures, he added, which “makes me feel like it was worth doing when people ask so many questions.” 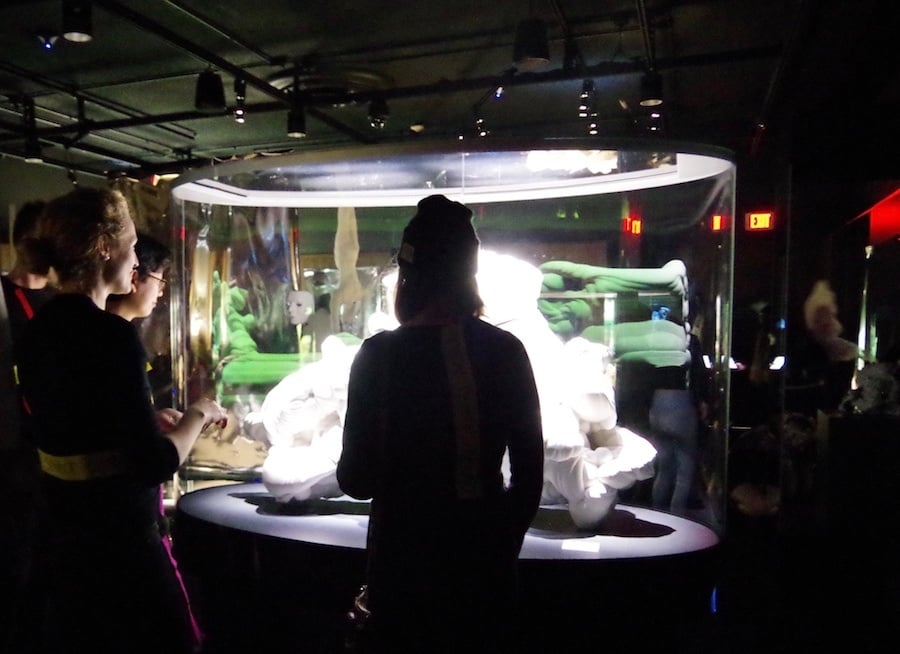 Just a few halls over, attendees were mesmerized by the brightly lit gems and minerals glittering and shining like beacons in the darkened David Friend Hall. No one expected museum volunteers covered in black from the face down to sneak up behind them or make loud noises as they walked by. Startled screams were followed by peals of laughter as the party-goers delighted in the tricks.

In the dark expanse of the hall, robots and angels lingered over gemstones the size of a person, in forms both angular and undulating, in sparkling purples and greens as well as lunar white. The minerals lent an eerie, otherworldly feel to the experience, as if attendees were astronauts on a strange, new planet.

Back downstairs, the dance floor was packed and dozens of small groups chatted beneath the Brontosaurus and Stegasaurus skeletons, appreciating each other’s inventive costumes. 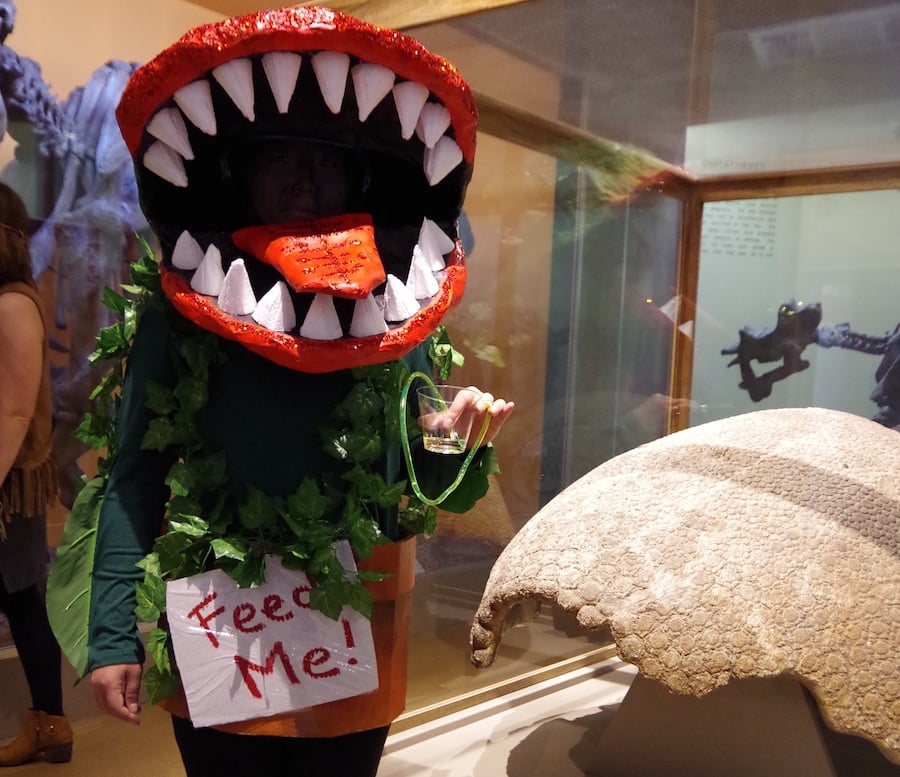 Yale employee Julia Hsieh came dressed as Audrey II, the vicious Venus fly trap from Little Shop of Horrors. She wore a masterfully-made papier-mache head piece, a cardboard terra-cotta planter around her waist, and a sign that said “Feed Me.” Her husband Aaron Nobel accompanied her in the guise of Seymour, but she was the one to take home second place among individuals in the costume contest.

Four of Hsieh’s friends from the Yale community placed second in the group category for their interpretation of the four seasons. AmandaLee Aponte iced her eyes with glitter and donned a tiara to portray winter; Jon Stroh adorned his tie and the lapels of his bright green jacket with a carpet of spring flowers; Katie Darr squeezed a child’s inflatable inner tube around her waist and wore a bright pink skirt to depict Summer; and Ryan Darr used autumn leaves for a pocket square and placed a glittery pumpkin on his top hat to complete the picture. 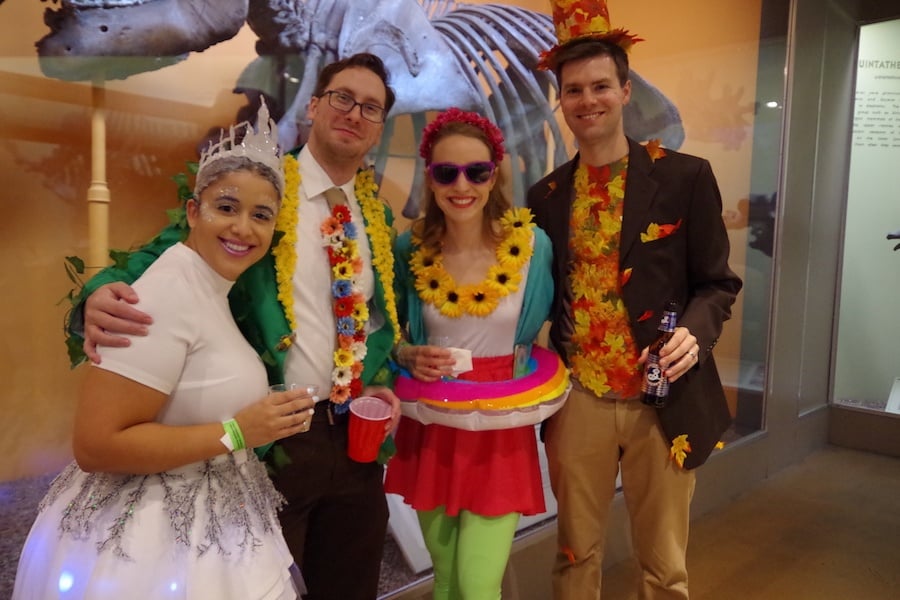 Better still was the solar system wandering the halls of the museum. Emily Gerruchi of Hamden strung battery operated lights through her black shawl and added rhinestones to her dress, creating her own new constellation, while colorful plastic balls served as planets orbiting her waist. She “wanted to make sure the sun was in the center,” so she cast herself in the role, donning a solar-ray headband and adding a golden, bronzed glow to the sparkles on her face.

At the end of the night, the live animals were packed up, the halls exorcised of their spirits, and happy revelers spilled onto the street.

Assistant Director of Visitor Experience and Special Events Hannah Meyers called the Haunted Hall and Costume Ball is “a great event to bring the community together in a safe spot for a fun evening.”

“It attracts so many different people from the university and the community,” she said during a phone call after the event. “It’s nice to have this moment where we all come together in a fun celebration that is still true to the museum’s mission.”

Lazo-Wasem’s message was more simple. “One of my favorite things to do is to show specimens and to tell stories behind them,” he said. “It was a lot of fun.” 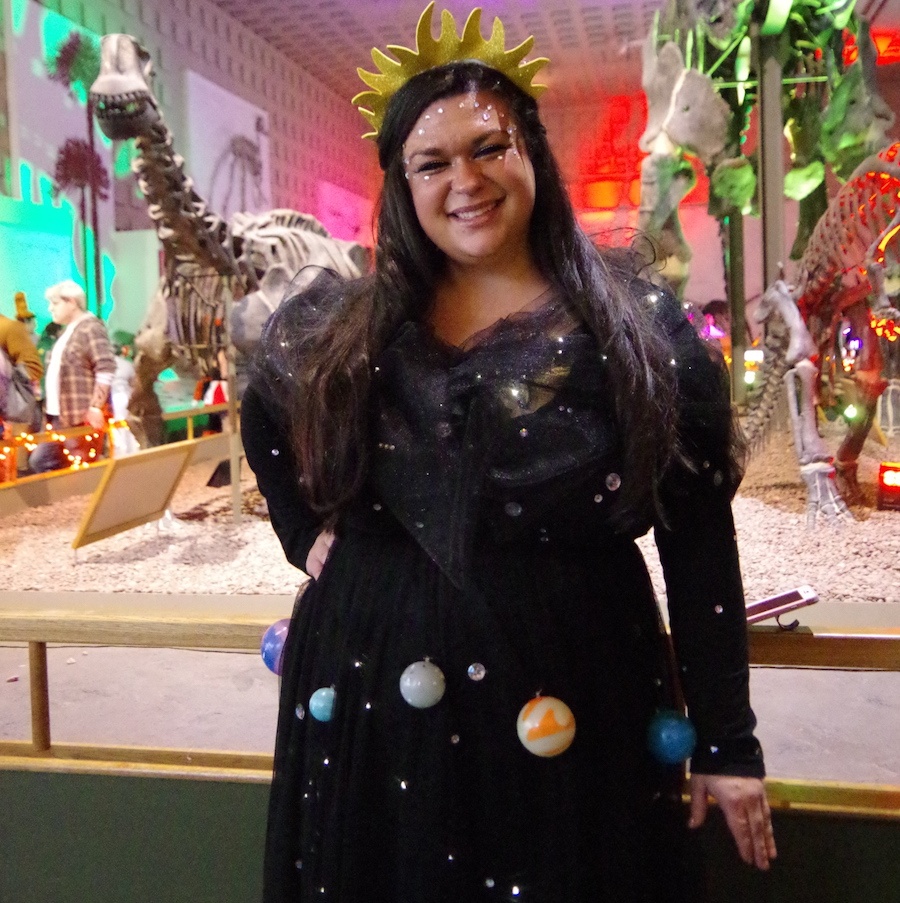