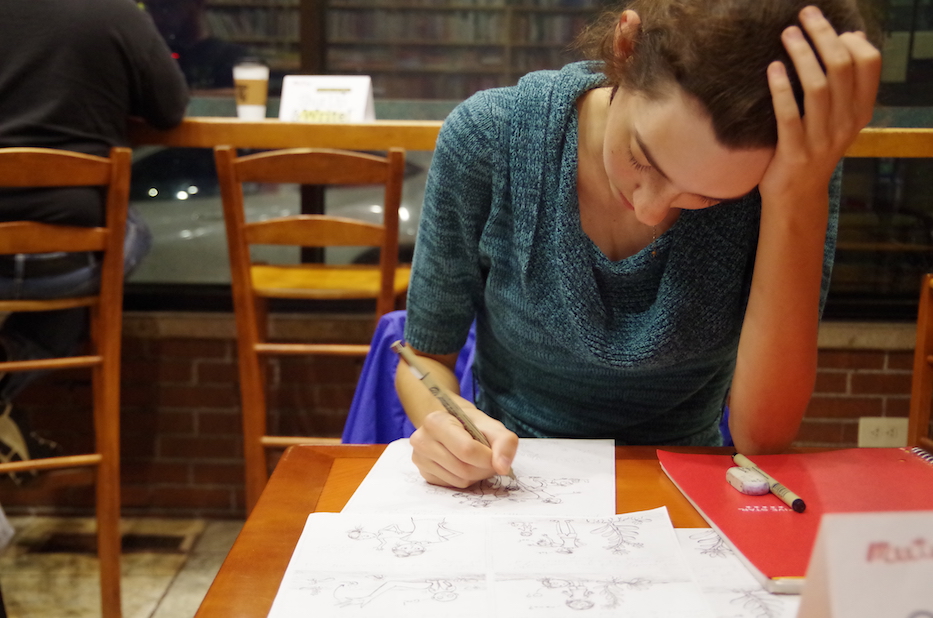 It's Thursday evening at Book Trader Cafe. Inside the glass walls, a dozen people sit hunched over laptops and notebooks, brows wrinkled in concentration. For much of the hour, the only sounds are clicking keys and scratching pens, honks from outside and cafe staff conversation. To the passersby on Chapel, this group might appear to be diligently studying for exams.

Instead, they're weaving new worlds, crafting dialogue, choosing rhymes. This is the New Haven chapter of Shut Up & Write!, a relatively new addition to the Elm City’s literary scene.

The national Shut Up & Write organization, which currently boasts over 50,000 members in 137 cities, hosts sessions via Meetup that foster a regular writing habit and build community. The local chapters all follow the same format: a quiet writing session followed by optional socializing. The events are always free and are open to all skill levels and genres of writing.

A chapter didn’t exist in New Haven until a year and a half ago, when recent transplant Kim Conner went looking for a writing group. Having previously worked in journalism, she wanted a way to keep up her writing outside the professional world.

But, to her surprise, she couldn’t find the sort of group she was looking for in New Haven. The few organizations she encountered were closed to new members or required applications with writing samples. It was intimidating and “just didn’t feel like the community that I was looking for.”

So, she decided to create it. Searching for a meeting template, she came across Shut Up & Write and appreciated the simplicity and accessibility of the format. “I wanted a group where anyone could show up.... all you need is the desire for a writing community.”

Ahead of the first meeting, she feared that she’d arrive at an empty cafe, “and I’d be shutting up and writing alone.” Instead, she was surprised to find several curious writers in attendance—including this reporter, who has been a member since. Some regulars continue to make it out every week, while others attend sporadically. It’s important to Conner that writers feel comfortable attending when they need it and not attending when they don’t.

“It’s like the writing group equivalent of the Room of Requirement,” she says. 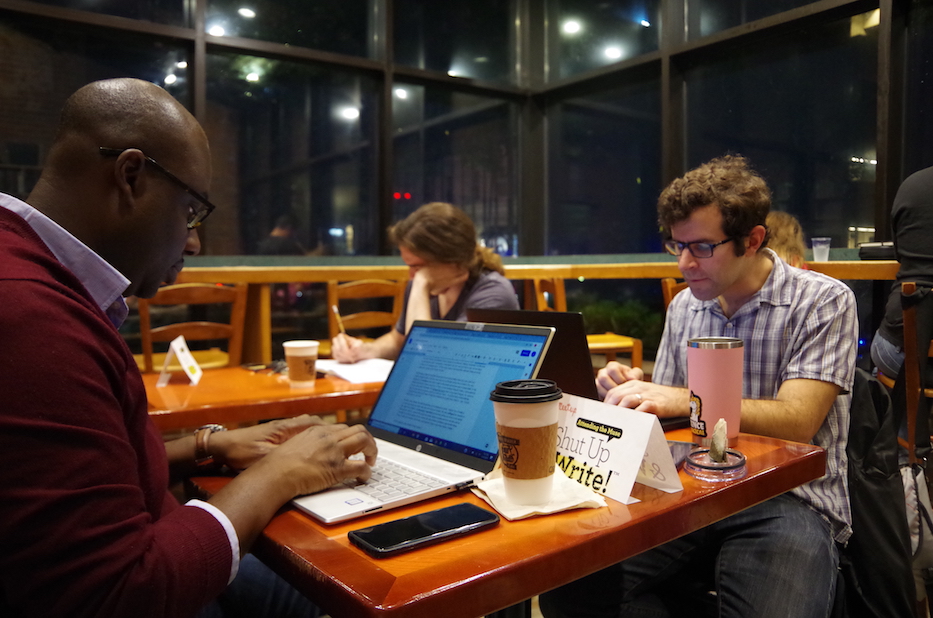 Almost every week there is at least one new face in the room. Tonight, the newcomer is Dipo Oseni of Cheshire, whose background is in screenwriting. One of his screenplays, a horror film called Duress, has already been produced. Another, a bank heist entitled 50, is in pre-production now. Recently, though, he’s been inspired to turn stories made up with his young kids into children’s books. He’s never written in this genre before and isn’t sure what will come of it, but “it’s a fun break from screenwriting.”

He’s not the only one using the hour for passion projects. Jeff Saerys-Foy of New Haven has been attending the meetup for three weeks. He has been writing about evolutionary narratives for his job as an associate professor of psychology at Quinnipiac University, and he came to Shut Up & Write for the opportunity to do some “not-work writing,” including fiction and poetry. He doesn’t write with the intention to publish—“I go through periods of writing and then burning everything I write”—but is open to sharing his work in the future to get feedback.

The genres represented at the meetup range widely on any given night. A sci-fi novel here, a memoir there, a couple short stories, a book on religion and ethics, a dissertation on John Milton, a poetry collection, a set of biochem questions (one member’s day job). It’s not even limited to writing. 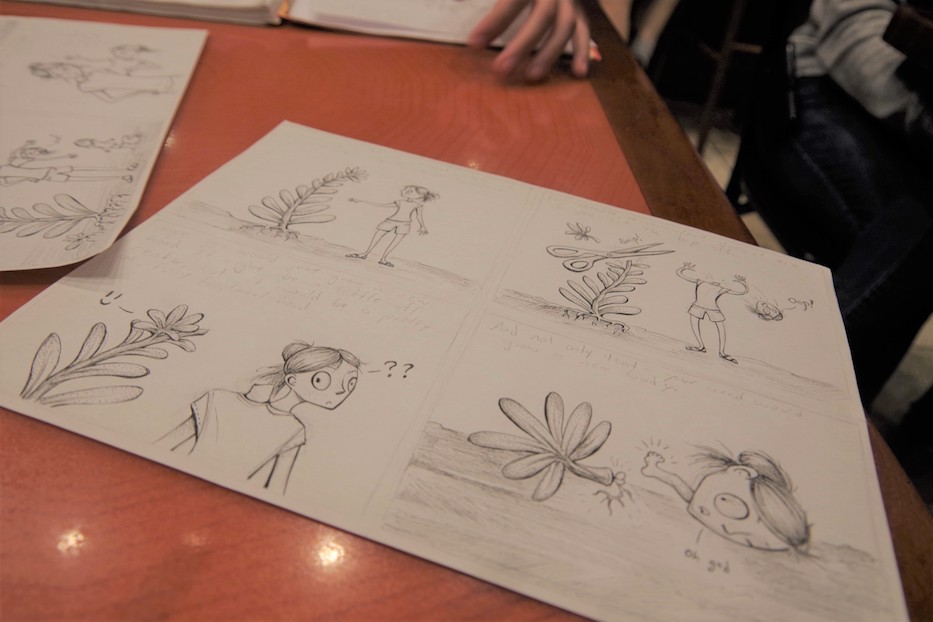 Haley Grunloh of New Haven is a regular attendee who sometimes writes comic strip scripts and other times works on illustrations. She appreciates the group’s casual and friendly atmosphere and likes that it “forces you to focus on a project for an hour.”

Currently, she’s in the midst of a short comic strip about “what if humans reproduced the same way that a lot of plants do, where a piece falls off and then it grows a new plant.” Her notebook shows whimsical depictions of people sprouting additional heads. “It’s a little more creepy than the stuff I usually draw.”

Beside a wall of books on music and dance, April Lewis of New Haven types away at her novel, the second in a light fantasy series called The Lady of Thyme—“thyme” referring to a mineral in her fictional world. Lewis participated in writing groups in high school and college and has missed the sense of community. Also, the group is an opportunity to get out of the house.

That motivation is echoed by Daniel Aegan of Wallingford, a sci-fi author who laughingly refers to himself as “too hot for traditional publishing.” He has self-published two novels and is working on a third, entitled Operation Maximum Chaos, which follows a rebellion against a future robot takeover. He makes most of his writer connections through social media, and he finds value in the face-to-face connections at Shut Up & Write.

One of these manifests as he speaks: when another member joins the conversation, they discover they write the same genre and swap favorite authors. 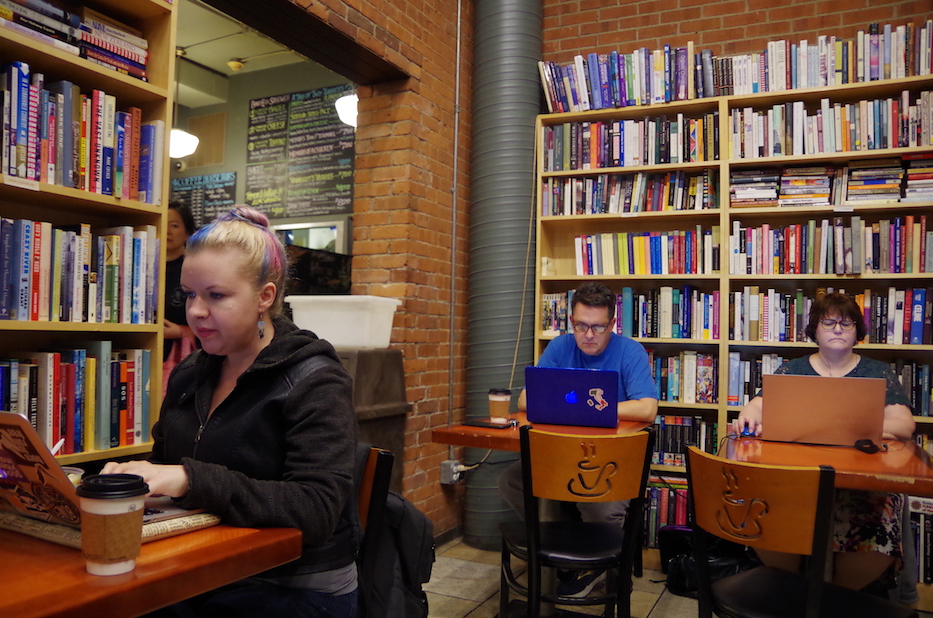 Those connections are a fundamental element of the meetup. As Conner explains, writers tend to be “a little introverted” and need a structured way to interact with other creative people. Unlike other writing groups, this one doesn’t involve formal sharing or workshopping of pieces. But members often discuss their work before and after, and sometimes share individually for feedback.

When asked about future plans for the group, Conner says she and co-organizer Chris Roshi are considering hosting additional meetings for those interested in workshopping. She also is thinking about incorporating shorter, prompt-based writing sessions. She can’t really say, though, exactly where the group is headed.

“I’m open to any ideas that anyone in the group has,” she says. “That’s kind of the beauty of it.”

To find out more about the group, check it out on Facebook.