New Haven Starts In On A Dance 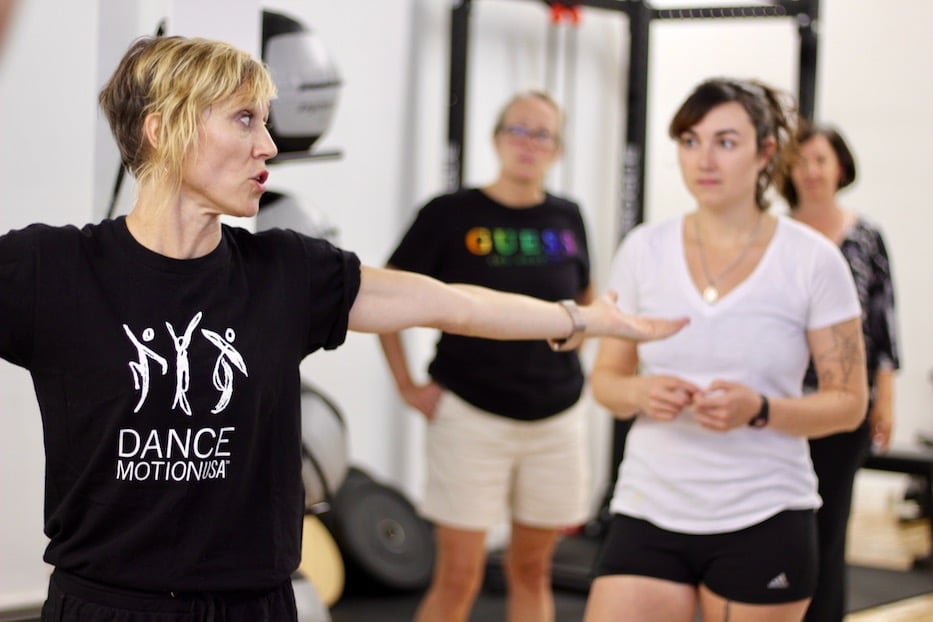 At a studio in Erector Square, dozens of New Haveners were melting into the floorboards. Twenty-some pairs of feet gripped the cool wood. Hundreds of toes spread slowly apart. Lycra and polyester stretched in every direction, skin folding in on skin. Breath, falling and rising, filled the room.

It’s a scene that has become familiar to Larry Keigwin and Nicole Wolcott, co-founders of the New York-based modern dance outfit Keigwin + Company. In advance of the 25th annual Festival of Arts & Ideas, the two are holding a series of “Let’s Make A Dance!” community workshops in New Haven, open to dancers, non-dancers, and newly-christened dancers of all skill levels. Next year, they plan to integrate community members into a performance at the festival, the title of which is still in the works.

After beginning last week, an additional four workshops are scheduled for Oct. 12 and Nov. 23 at the United Church on the Green Parish House on Temple Street. On both days, workshops run from 10:30 a.m. to 12 p.m., and 1 to 2:30 p.m. Registration, which is free, is available here. 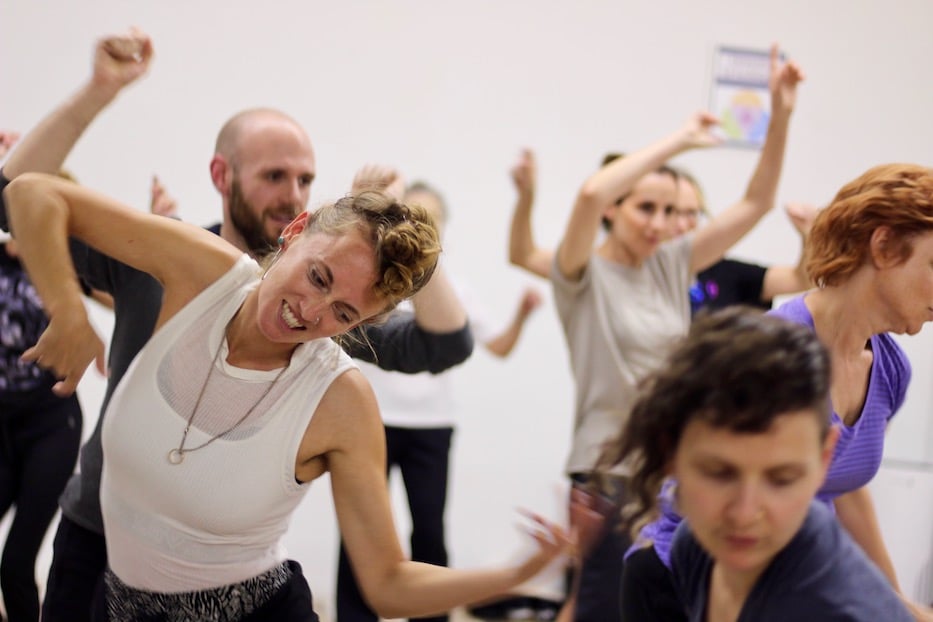 After the workshops, participants can decide whether to follow the process through to formal rehearsals in the spring and a final performance in June. They are only expected to attend one before that time, in what Keigwin called a chance to "test drive" dancing together.

The idea behind “Let’s Make A Dance!” is to work with community members to devise a work that reflects New Haven and the people who live in it. In the final performance, Keigwin and Wolcott will depart from a traditional duet, weaving community members into a piece that both explores show business and—by their description—manages to probe the human condition.

In a workshop at Erector Square last week, both of them called it intensely collaborative, with choreography that originates with New Haveners themselves.

"We go into communities, and we make a dance about the community,” said Wolcott. “The show has a little bit of razzmatazz, it talks about age and vulnerability … there’s a space for every level. Everyone belongs in this piece.”

“I challenge anyone to stay angry or sorrowful after they’ve danced,” she later added. “When you’re building a show together, we’ve found that it’s so much fun, and it’s challenging. There’s a real richness there.” 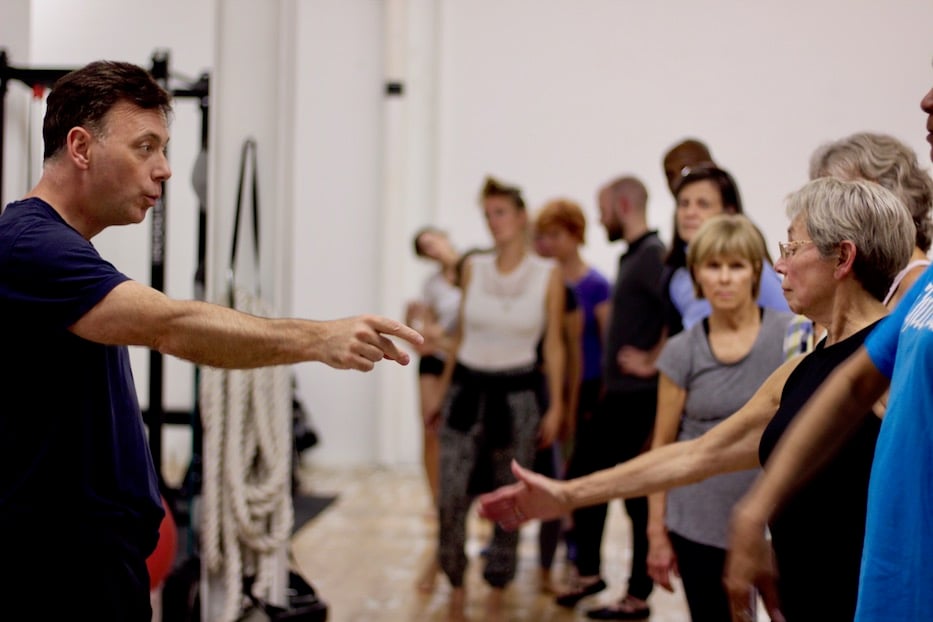 While the piece will be unique to New Haven, it has precedents in the company’s explosive Places Please and Bolero, the latter of which is set to Maurice Ravel’s orchestral piece of the same name and has been performed in over 10 communities around the country.

Thursday, participants included New Haveners with flowing, bright butterfly capes, yoga pants, skinny jeans, faded sweatpants, and wide-legged corduroys. Some were just a few years old; others came in silver-haired with decades of stories etched across their faces. As they formed a wide circle, several ended up beside people they’d never met, introducing themselves with loud, boisterous gestures that the group mimicked in unison.

As they did, the playing field leveled. Dancers and non-dancers became a room full of townies trying to do something together. East Rock residents sidled up to activists who live in Fair Haven. Pros in refugee resettlement found themselves next to dancers who could go from voguing right into a fouetté turn. Backstories were traded for eight-counts and propulsive strides forward.

In two hours together, the group designed a routine that started at all four corners of the room ("everyone knows stage directions? No?" said Wolcott at one point), added arm gestures and freeze frames midway through, pulled out soloists for fancy footwork but remembered not to leave anyone behind. Split into four interweaving sections, participants strutted and stopped, marked their fiercest freezes and smoothest zipper merges. 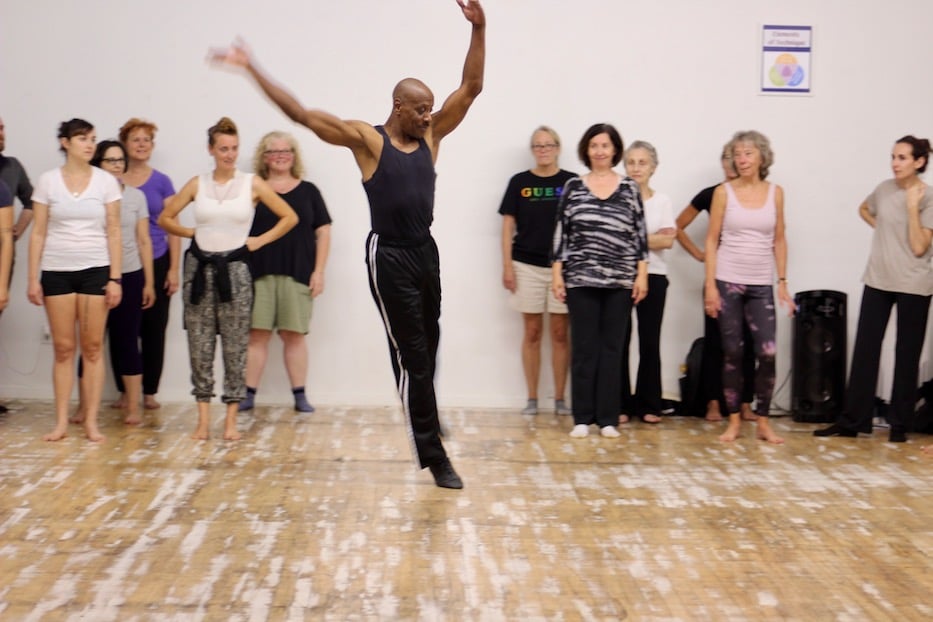 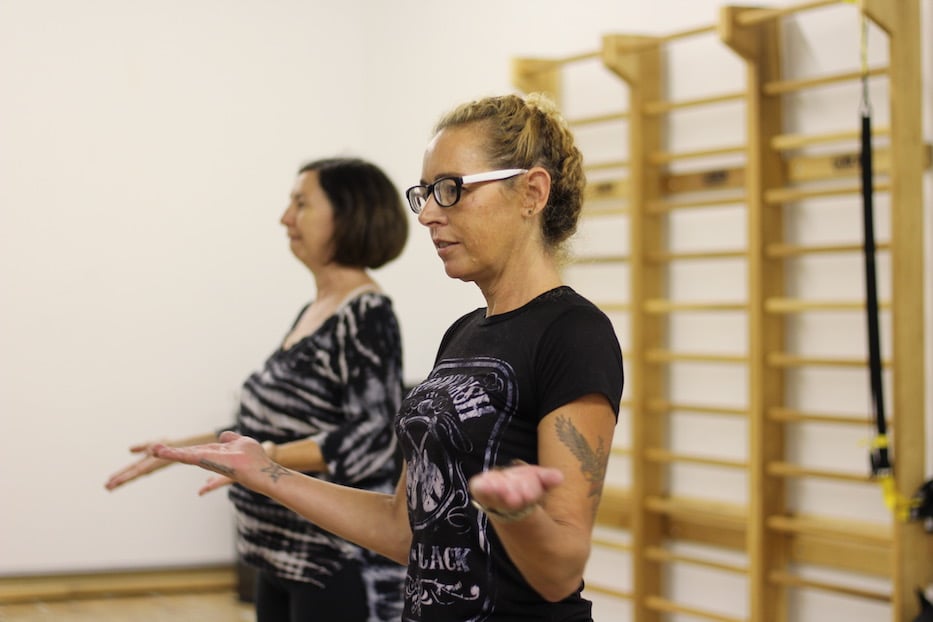 “I just think of it [dance] as one of the original ways to experience joy and connection,” Keigwin said in an interview after the workshop. “I feel like it is an expression of complete joy. We all like to feel that sense of accomplishment and productivity.”

There's truth to it, we found Thursday. Here’s where the fourth wall breaks, and I tell you I’m a participant in the program, following it through until June. That I don’t especially like to be in my body, which is a disabled body much creakier than its 29 years let on; that I firmly believe mirrors and windows would make us feel a great deal calmer if they were all covered with butcher paper. That I woke up on Thursday with a sore throat and stuffy nose, and found the thought of DayQuil much more appealing than dancing by my walk to Erector Square.

What actually happened when I got there was much more profound. By the time we had all removed our shoes and circled up, I’d made a mental list of who was in the room (arts practitioners, amateur cellists, two local professional dancers and a few social justice advocates, most of them/us white) and who wasn't. I was skeptical of how much community two outsiders could conjure in a room that didn't reflect all of New Haven. 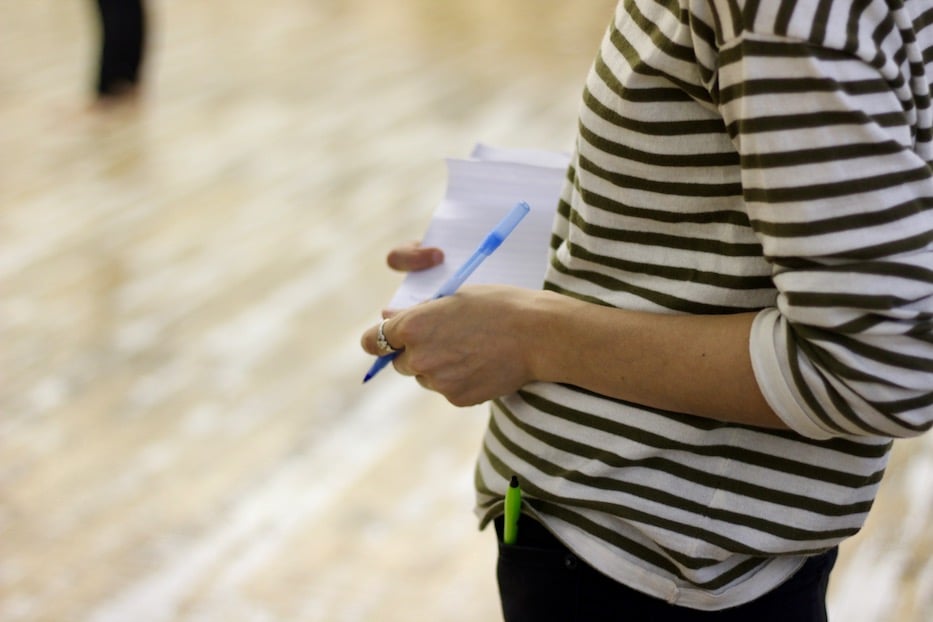 I wondered how many people had driven to Erector Square as a destination, and how many had walked because they lived close enough to do so. But I also got to know my neighbors, two pint-sized dancers in flowing capes and matching jersey dresses, only one of whom liked to use her outside voice. For them and for me, it seemed like if we had made it to the floor barefoot, there was no turning back.

And then I didn’t have time to wonder, because we were unlocking our bodies in a surprising state of grace. I melted into the floor, and stopped caring that people were looking. I lined up with a group of folks I’d never met before and watched as movement picked up where verbal communication left off. Participants gave each other little nods of encouragement, bursts of applause and occasional high fives. Across the room, I watched as an acquaintance—someone I've interviewed many times on refugee resettlement—glided across the floor as if she's been born to do it.

The dynamics of dance took on those of the workplace, of the board room, of the pick up sports club. They shape-shifted from hot to cold, loose and improvisational to hard-edged and uncompromising. Some attendees glowered at missed cues, then collected themselves and got back to work. One poked me as I adjusted my camera and slipped my steno pad in my waistband, as if to say, don’t mess this up for the rest of us. Immediately, someone else took note, caught my eye and winked. 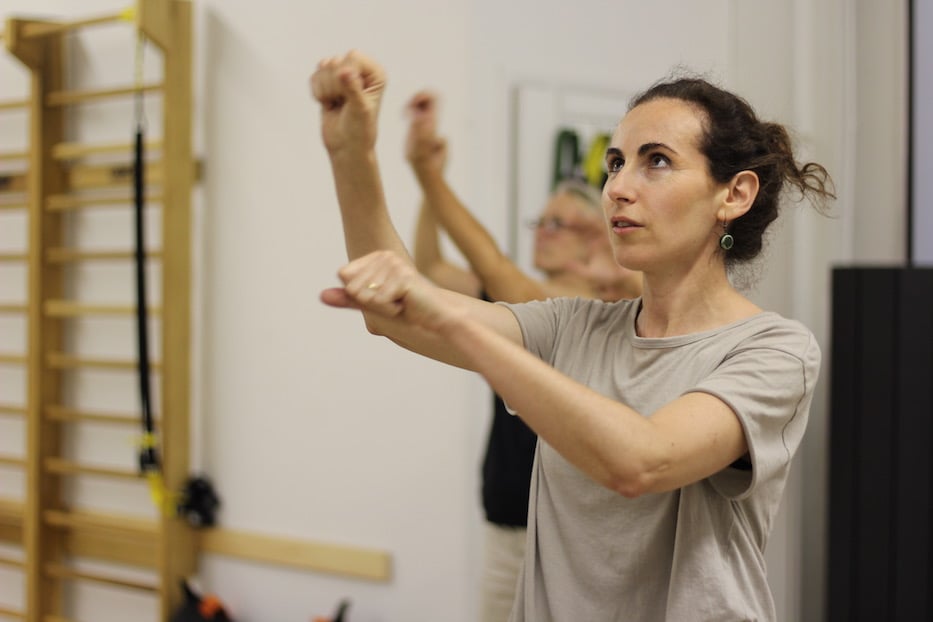 That’s part of the strategy, it seems: to translate a moving, shifting New Haven to two well-intentioned interlopers, rather than have them write its choreography themselves. In just two hours—a length that has been shortened to 90 minutes for the remaining workshops—we improvised melty floorwork and standing routines with defined phrases, picked out soloists, sorted out our own places. Keigwin and Wolcott were there to guide, but group members took initiative, then ceded back the floor when they realized they were all out of new choreography.

It’s a strategy that comes at a specific moment for the city, where it feels like there’s been a breakdown in communication between political candidates and voters, between parents, schools, and the Board of Education, between neighborhoods, developers and the longtime city residents they are displacing, between the optics of public inclusion and that inclusion itself. 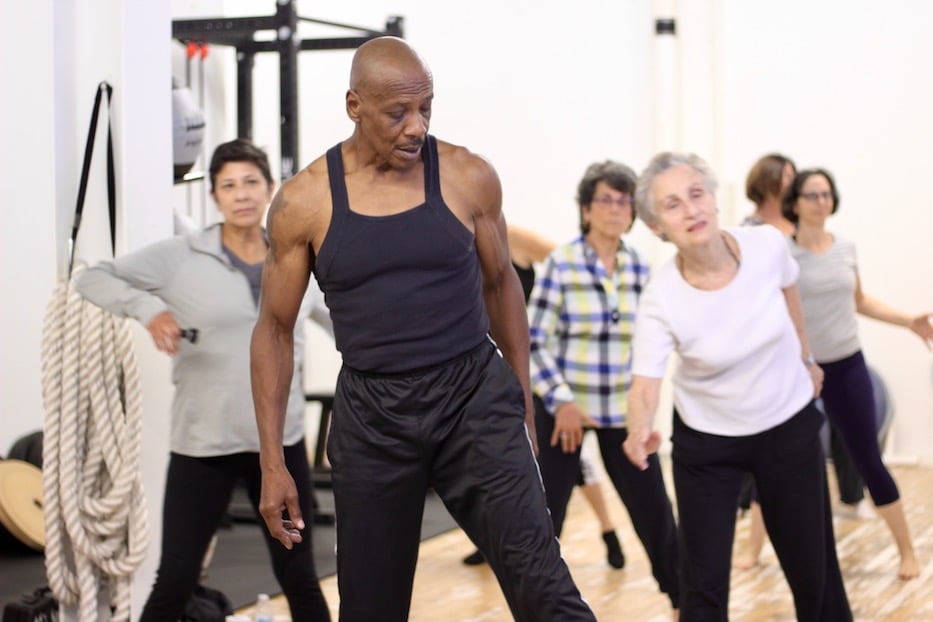 Which is to say, a dance is no panacea. But if we can move together, apart and then in unison, maybe it’s the beginning of something. After the workshop, Keigwin noted that community dancers often stay in touch after the choreographers have left the city, holding semiannual potlucks and dance reunions that bring different sections of the community together.