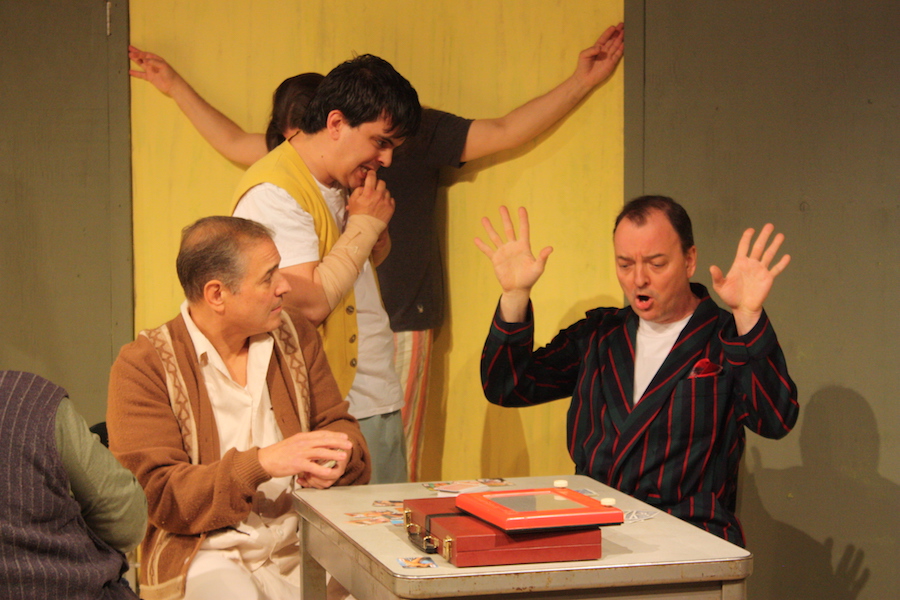 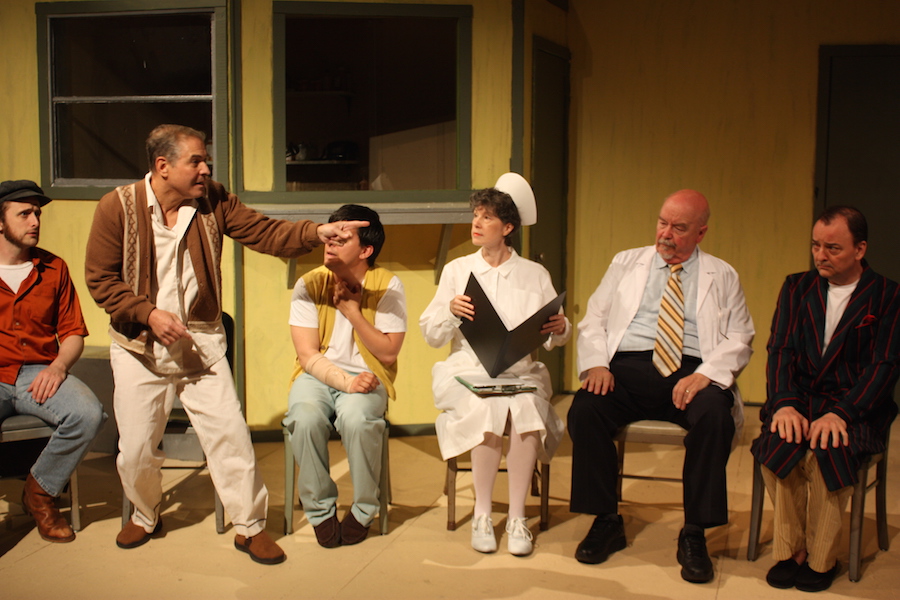 The lights come up, and we are somewhere that is definitely not home. Onstage, “Chief” scrapes off a piece of old gum from the bottom of a chair with his bare hands. McMurphy enters from within the dormitory in search of his playing cards, where he finds Chief on the floor desperately scratching.

He gives Chief a piece of Juicy Fruit gum, an offering in sanity. It seems like the beginning of a friendship that will last until the end of time.

New Haven Theater Company (NHTC) began its three-week long run of Dale Wasserman’s One Flew Over The Cuckoo’s Nest last Thursday, in the back of the EBM Vintage on Chapel Street. Performances continue on Thursdays, Fridays and Saturdays through May 11. The play marks the company’s final show of the season; tickets and more information are available here.

Directed by George Kulp and adapted from the novel by Ken Kesey, One Flew Over The Cuckoo’s Nest revolves around eight patients in a mental institution and Nurse Ratched (Suzanne Powers), the matriarchal figure who governs them. The play’s focus is centered on protagonist Randall P. McMurphy (Trevor Williams) who has been committed to this mental institution following a judge’s ruling that he is a “psychopath.”

McMurphy is in for a rude awakening when he joins the others. While he enters the institution thinking he has gotten off easy, he soon finds out that he is at the mercy of Nurse Ratched, who will keep him there for as long as she wants. 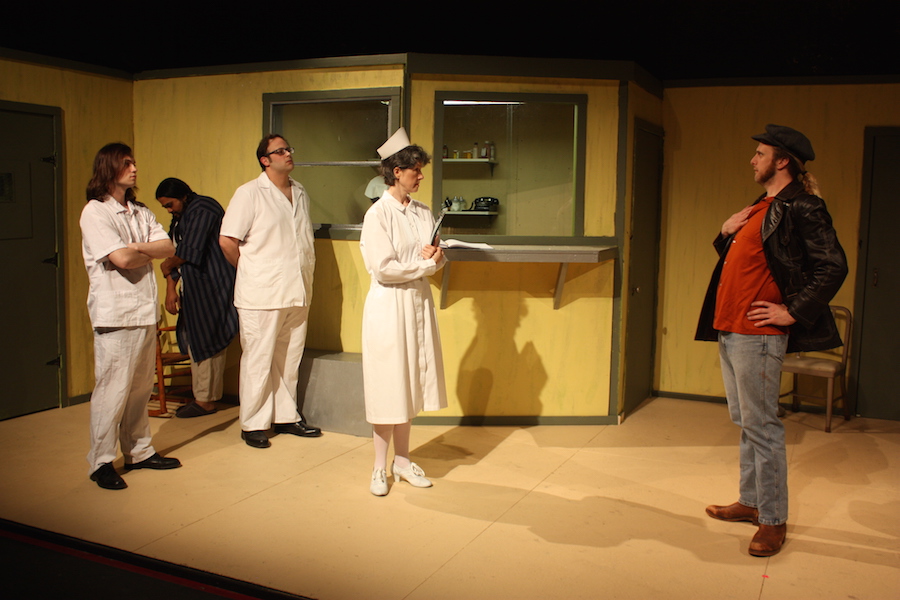 As she takes the stage, Powers shows the complex and manipulative relationship that Nurse Ratched has with the eight patients. We watch as she uses her control to do good, and when she uses it to do harm—which is a majority of the time. Her movements are precise and her garment starched and completely white, showing an obsession with order.

Her hold extends beyond the patients. When Nurse Ratched interacts with Doctor Spivey (John Watson), she is cold and calculated, her power palpable even in the audience. Spivey takes a very passive outlook on the care of his patients; Nurse Ratched makes sure that he takes every action to keep his patients in check—even if those actions cause harm. While Doctor Spivey’s movements are slow and relaxed, Ratched’s are calculated and rigid, a harbinger of the power that she wields over those around her.

“Oh, she requires his approval” says Mr. Harding (J. Kevin Smith) as he talks to McMurphy about Nurse Ratched’s hold on Doctor Spivey. “But that’s a formality. He’s got two hundred patients, a bleeding ulcer and no desire to make waves.”

In the play, this action is carried by the narration of Chief Bromden (A. M. Bhatt), and the day-to-day life of the patients. Chief’s narration is directed to his late father “Papa,” to whom Chief gives a series of daily dispatches. It’s through this intimate kind of conversation that the audience gets a look into not just the world of the mental institution—and what mental healthcare looked like not that long ago—but the harrowing reality in which these characters live.

Chief’s narration is accompanied by simple lighting, which adds to the intimate feeling of his speech. A singular spotlight stops on him as he delivers his inner monologues, mixing with his soulful voice to create a whole range of emotions. Despite Chief’s sometimes circular language, Bhatt’s raw emotion makes it clear exactly what he is trying to express. Indeed Bhatt’s performance beautifully portrays the pain that Chief has experienced both in the mental institution, as well as the pain he had experienced in his childhood.

“New admission, Papa, now they gotta fix him with controls.” says Chief at one point. “They got wires runnin’ to each man and units planted in our heads. There’s magnets in the floor so we can’t walk no way but what they want.”

Similarly, Trevor Williams’ performance is nuanced, so much so that he’s able to show McMurphy’s sanity in a place that is utterly insane. As an energetic and easygoing McMurphy, Williams shows an initial optimism going into the mental ward, as well as his eventual defeat at the end of the play. He takes on McMurphy’s rambunctious attitude, and turns it into a fiery defiance towards those in charge. While the character R. P. McMurphy is slightly irrational and crazy, Williams makes him seem like the only sane person in the ward.

While watching the play, one feels as though they could be in the ward themselves. Set designer Donna Glenn Smith has created a set that puts the audience front and center for any action that takes place. In the back of the stage, there’s a medicine cabinet that the nurses use to hand out the patients’ medicine. It’s higher up than the rest of the stage, which means that the nurses are able to supervise patients through a glass window. It gives Nurse Ratched a certain added authority, allowing her to look down at the patients through glass. 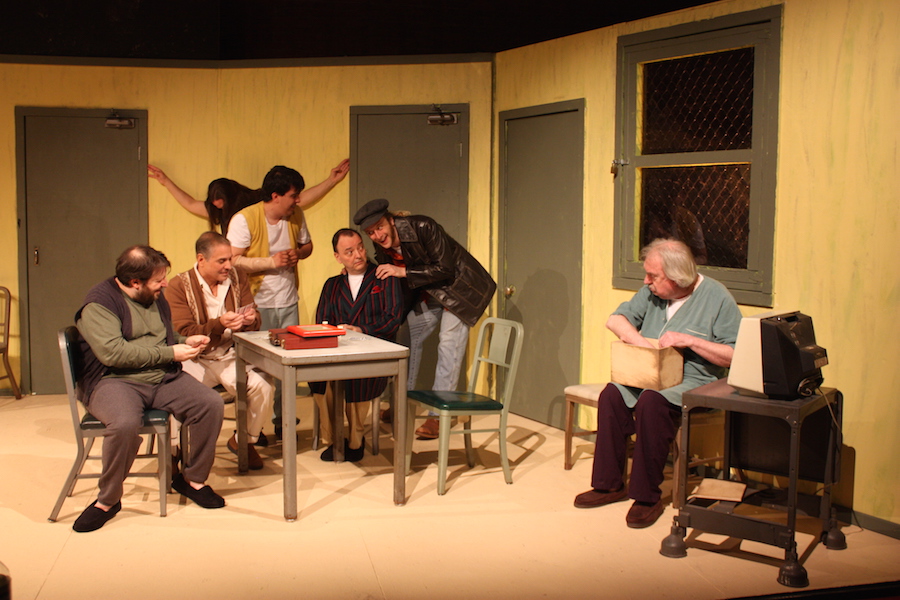 While Kesey’s novel is a document of the recent past, this play feels right on time. One one hand, it shows audience members how much has changed in the world of mental illness, often for the better. Decades after the book was first published, it’s more acceptable to talk about—and seek help for—depression, anxiety and a spectrum of mental health disorders. Harsh methods with electroconvulsive therapy are largely out; Deep Brain Therapy (DBT) is in.

But on another, it reminds us how far we still have to go before mental healthcare—and those that use the system as a disciplinary measure—is kind and compassionate in this country. Decades after the book was published, this performance pushes us to ask: who really wants to help? What are their motives? And what will they do, when they have the power to literally control our brains?

Performances of One Flew Over The Cuckoo's Nest run Thursdays-Saturdays through May 11 at EBM Vintage at 839 Chapel St. Tickets and more information at the New Haven Theater Company's website.