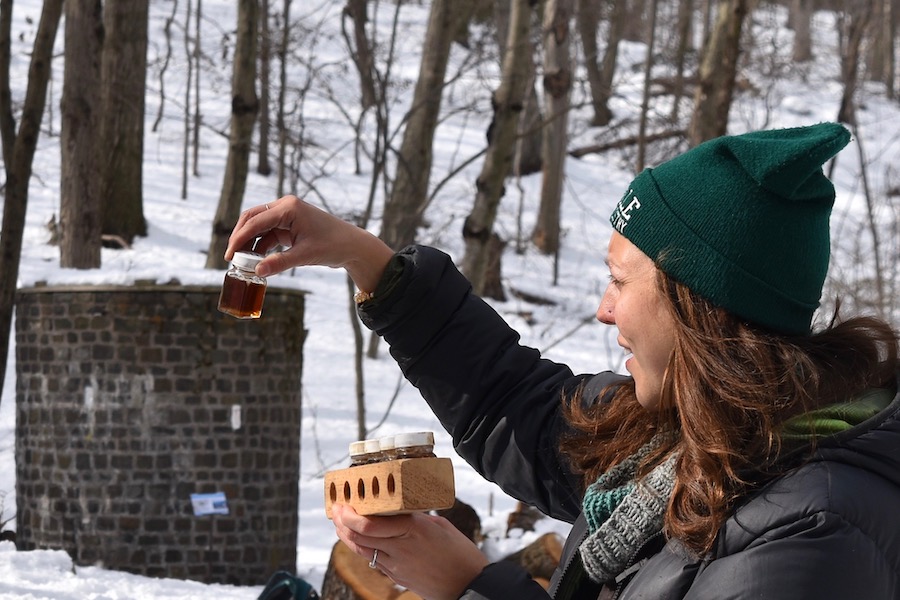 Buses were trundling by on Whalley Avenue as Naomi Senzer and her family started tapping the sugar maple trees in Edgewood Park. Just a few yards from the basketball courts and the parking lot, sap dripping into two metal buckets sounded the “plink, plink” of early spring in New England. A few miles further down the 243 bus route, Common Ground was lighting a fire in their sugar shack, ready to boil some sap and concentrate it into maple syrup.

Friends of Edgewood Park (FOEP) and Common Ground are taking maple sugaring—the process of making maple syrup—out of the woods and into the city. Throughout February and March, these two groups help New Haveners plug into their local food systems and get hands on with this quintessential New England activity.

On a late February afternoon, Senzer wanted get ahead of the storm that was forecast to postpone FOEP’s Annual Maple Tree Tapping, so she brought her family to the park with buckets and tools in tow, ready to start sugaring.

First, it was a matter of identifying the right trees to tap. For Senzer, this is second nature. She said knows these trees like she knows her neighbors and her family remembers which ones are healthy and which ones give a lot of sap. 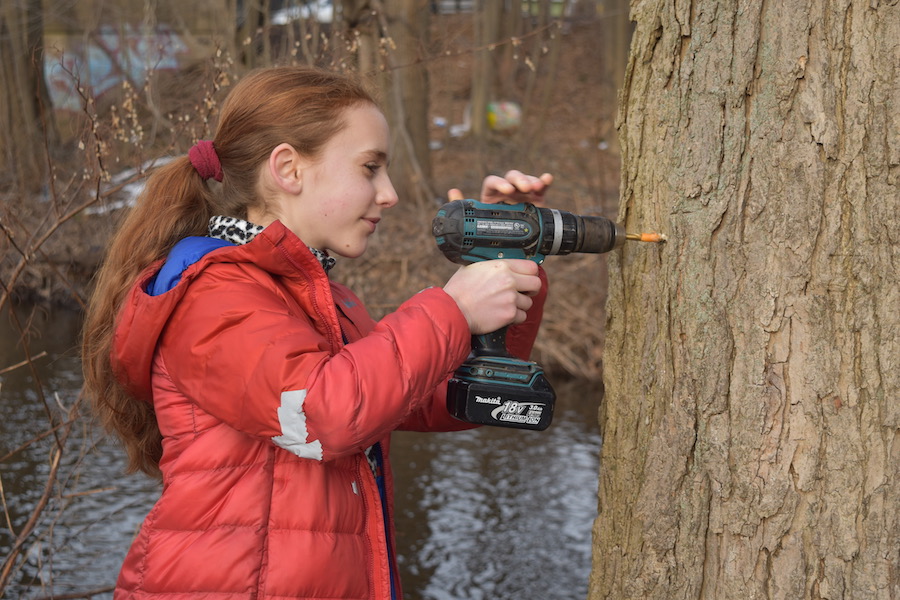 Senzer’s daughter Beylah pointed to a few trees growing right on the bank of the West River by the basketball courts, close enough to hear the traffic rumble over the bridge on Whalley Avenue.

“These always give a lot,” said Beylah.

In winter sugar maples are visible because of their shaggy bark, Senzer explained. But it’s best to develop a year-round relationship with trees that need to be identified for tapping.

In the warmer season, maple leaves have an iconic five-pointed star shape like an outstretched hand, and their branches sprout samaras, which are known commonly as “helicopter seeds.” The true sign is in autumn, said Senzer, when sugar maples light up in “flaming oranges and pinks”—the kind of colors that fairly glow on a fall day. 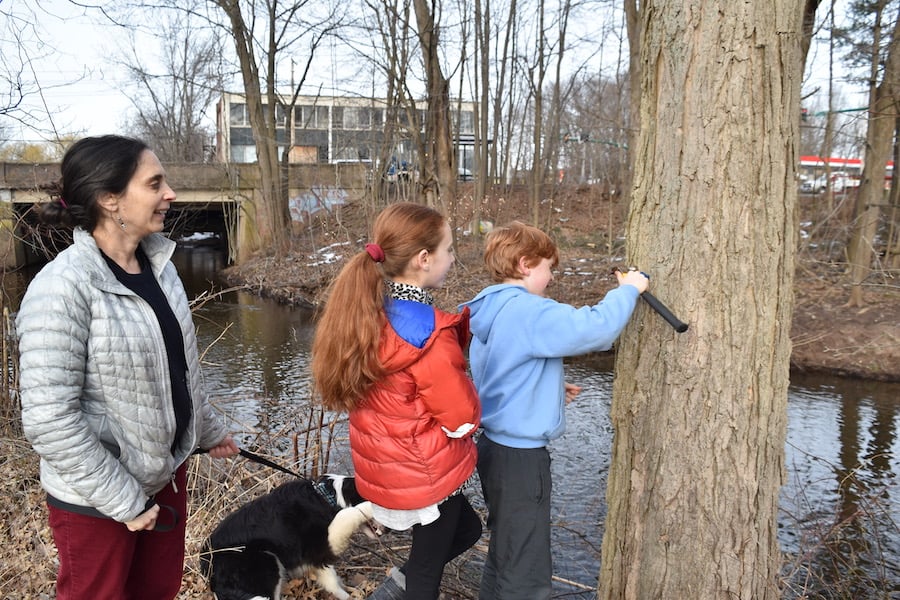 After identifying the best candidate, Beylah and her brother Sam—both of whom have years of experience tapping trees with their mother—took turns using a battery-powered drill to make a small hole in the tree. A ring of orange tape around the bit made sure they didn’t go more than an inch or two in: far enough in to get through the bark, but not so far they would pass the tree’s outer rings where the sap is flowing. As soon as the drill was out of the tree, sap began to drip down the bark.

The next step was to put in stiles—the plastic or metal spouts that help the sap find its way into the bucket and also provide a hook from which to hang the bucket itself. Beylah and Sam tapped them in firmly but gently, and placed the buckets underneath. The dripping sap started to make a steady plinking sound on the metal.

“That’s the plip-plop sound of spring,” Senzer said with a smile. 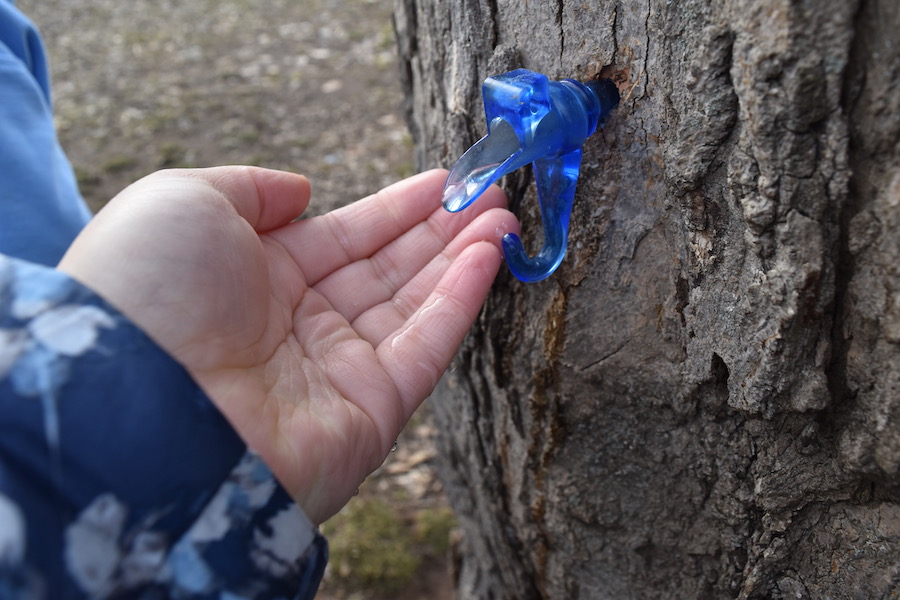 On a good, warm day, the drips come fast and up to two or three gallons of sap can flow from each tap. The sap often flows through the first week in April, but it’s entirely weather dependent. Once the temperatures stop dropping below freezing at night, the sap stops running. Climate change has made the sugaring season less predictable, but watching the thermometer helps: when daytime temperatures are above freezing—ideally in the forties—and nights are around 25 degrees—that’s the sap-collecting window.

A bit further into that window, just a couple weeks after Senzer hammered in her first taps of the season, Common Ground Environmental Educators Alexa Fiszer and Tricia Mangold Heiser were teaching a group of three dozen children and grownups about the same process.

“When the tree is not growing in winter, it sends its sap down into its roots as starch, but in the spring, the tree is waking up” and sending its sugary sap up into its branches, Heiser explained to a group gathered around a big sugar maple on Common Ground’s urban demonstration farm. 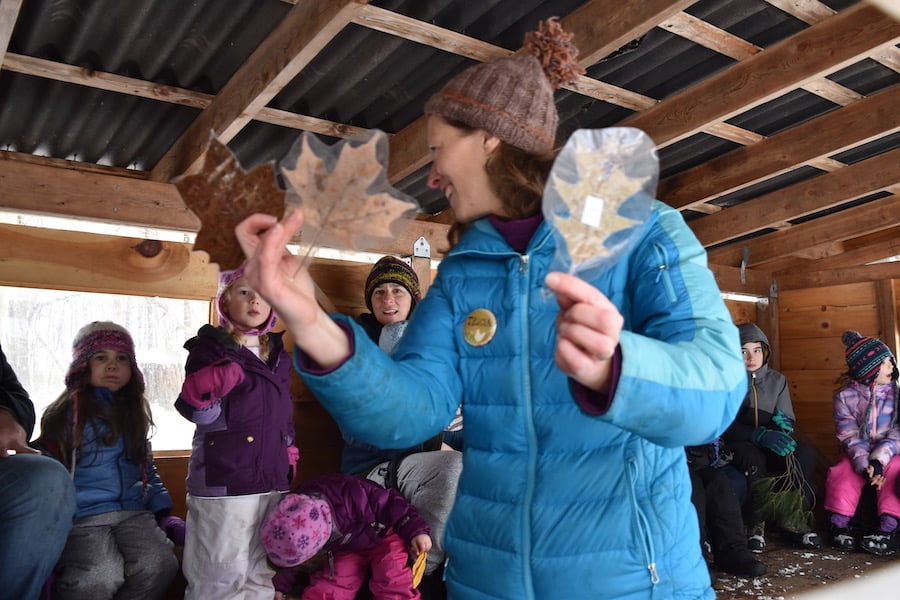 Heiser showed them a metal sap-collecting bucket with a “hat” to keep out leaves and twigs. On the same tree, she showed them yards of plastic tubing carrying the sap to a bright orange five-gallon bucket from Home Depot--a popular, more modern way to collect sap.

The bright March day found a dozen children attending the maple sugaring class, scampering up and down wooded slopes in snow pants and jackets, their boots crunching on the sun-lit snow. They used strings to measure the circumference of the trees to see which met the minimum size for tapping, practiced boring into a stump with hand drills, and used a hammer to tap stiles into a rotting log.

Later, it was time to head to the sugar shack, where maple sap is transformed into liquid gold. Standing outside the small wooden out-building, the children guessed how many gallons of sap are needed to make one gallon of maple syrup: One? Twenty?

“That’s why it’s so expensive!” an older child remarked to his mother, turning around with wide eyes. 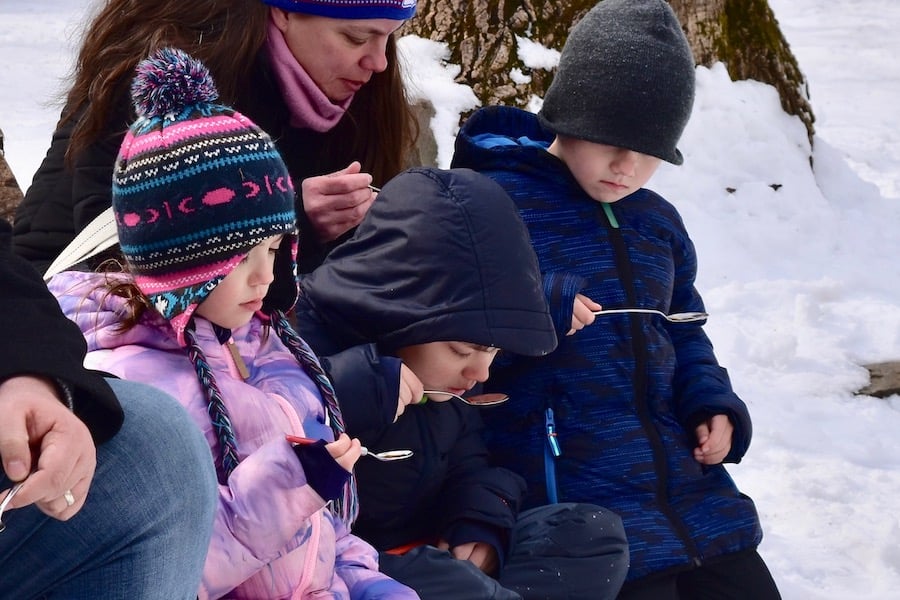 Reducing the sap takes about eight to ten hours of boiling in an evaporator—a shallow metal pan heated by a wood fire. Common Ground keeps their evaporator going throughout the season, adding new sap to the pan as it’s collected from the trees. The goal is evaporate a great deal of the water, concentrating the sugars from the two percent present in raw sap to the 66 percent that constitutes finished syrup.

Inside the dim sugar shack, a warm fire was going in the wood stove, the smoke escaping through a chimney while steam from the evaporating syrup escaped through vents in the roof. Kids took turns stepping up on a stool and peering into the evaporator at a safe distance, the steam sending wafts of sweet maple scent over their faces. 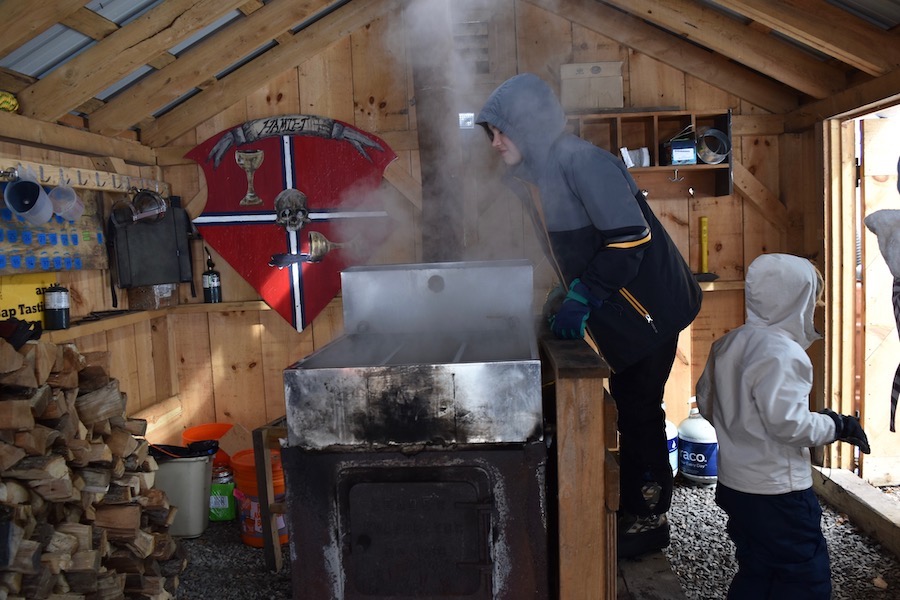 There’s no evaporator at Edgewood Park, but FOEP coordinates individual neighbors who want to collect sap from the buckets in the park. “Serious boilers” in the neighborhood sign up year after year and may even collect 20 to 30 gallons of sap to boil at home.

“We are probably the most hardcore of the boilers,” Senzer said. They’ve made their own evaporator in the backyard out of a stainless steel sink and cinderblocks. On boiling days, Senzer gets up early and the family works together to tend the fire and the evaporator.

“It’s a lot of steam,” said Beylah, while Sam warned that even a quick trip to the bathroom at a crucial point in the boil can turn the syrup into a charred, sticky mess.

“It’s not pleasant when it burns,” he said, shaking his head. 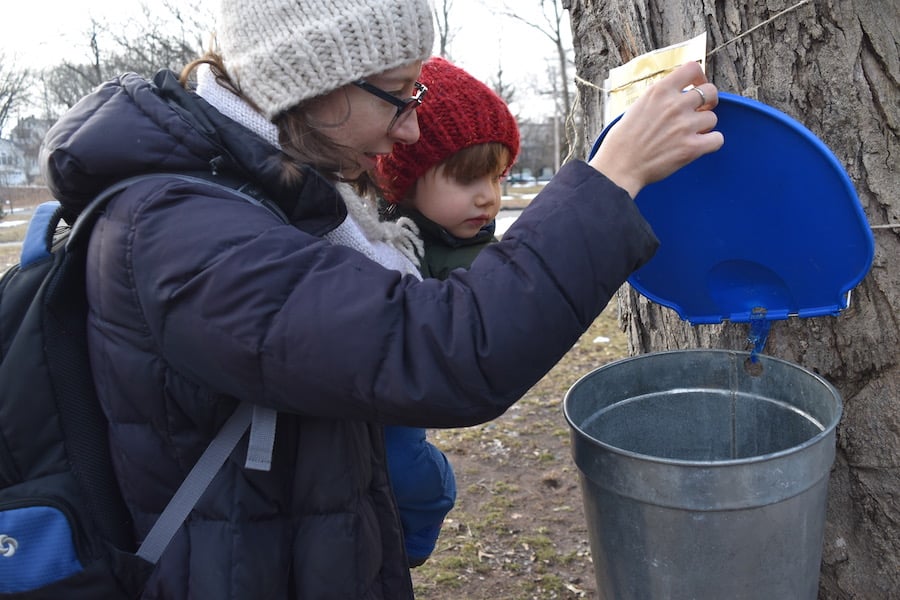 But for those willing to watch their syrup closely, Senzer says that collecting and boiling sap “feels like the natural progression” for anyone interested in local food systems or for foodies who want to make this staple from scratch.

Common Ground has been running their sugaring program for two decades. Director of Community Programs Rebecca Holcombe said in a recent phone interview that their focus is not on production, though they do have some syrup for sale.

“Our purpose for doing it is to showcase to the magic of making maple syrup,” said Holcombe. If you have a sugar maple tree that’s growing in Florida, you can’t make maple syrup from it. You need both the tree and the kind of weather we get in February and March in New England, she explained. “What most people don’t know is how cool is it is that we can make this product from native trees here in our backyards in Connecticut.”

Senzer has been tapping neighborhood trees and boiling sap in her backyard for ten years now, and she’s a bit like the Johnny Appleseed of maple sugaring. She says late winter finds her walking around with stiles in her pocket, handing them to interested parties and saying, “Here, do you want to tap a tree?”

Senzer knows of at least a half-dozen families who tap trees in the neighborhood because of her example, and she added that, for her, sugaring is a reason to get out in the fresh air she craves after a long winter.

“I’m kind of evangelistic about it,” she said. “It gets me through the month of February.”

On March 23, from 10am to 1pm, Common Ground will host their annual Maple Sugaring Festival, which is free and open to the public. Folks who are interested in collecting sap in Edgewood Park to boil at home can email friendsofedgewoodpark @ gmail.com for more information.