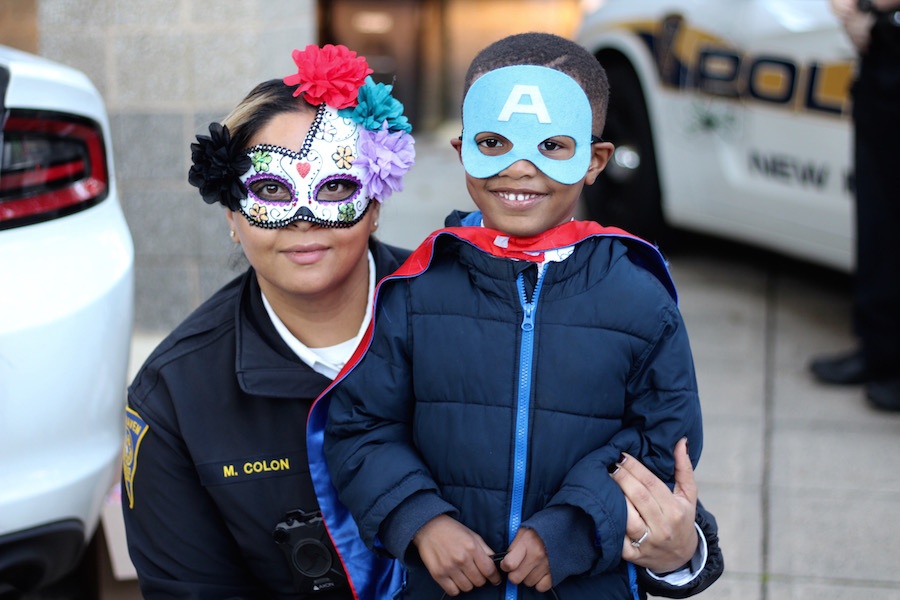 Captain America couldn’t get enough of the tiny bags of M&M’s. Wonder Woman was feeling shy, until a fleet of lollipops made their way into her sack. And a not-so-fearful hyena straight from The Lion King was all about the airheads—and posing with a few spiderwebs, pumpkins, and cop cars.

Tuesday night, they were just some of the superheroes and Disney villains who came out to Newhallville’s second annual “Trunk or Treat,” held at the neighborhood’s police substation on Winchester Avenue. The event was organized by Newhallville/East Rock district manager Lt. Manmeet Colon with support from the Livable City Initiative (LCI) and pumpkin donations from the Shore Line Trolley Museum. A few dozen families came out.

As temperatures dropped, kids in costume flocked to the station. Some, like 12-year-old Tamia Robinson and her mom Shanette, had come from as far as Hamden when they’d heard about the event, a chance for Tamia to celebrate Halloween a day early. While she said she loves the spooky holiday, she has dance lessons tomorrow night, and won’t make it out before nightfall. So she and her mom made a quick costume choice—her hyena garb from a dance recital earlier this year—and hustled over to the substation.

“It’s fun when you get to see people’s reactions,” she said.

But most were neighborhood kids who don’t otherwise trick or treat in the neighborhood. As he arrived at the station, 4-year-old Caydan Prince Cave flitted excitedly between three haunted cop cars, their trunks open and decorated with thick spiderwebs, half-submerged skeletons, and orange-haired witches. He pulled a Captain America mask over his eyes and chatted with Lt. Colon as and Officer Monique Moore as East Shore district manager Lt. Jason Rentkowicz went to grab a pumpkin for him to decorate at home. M&M’s securely in his hand, he ran around the cars, red cape whipping in the wind. 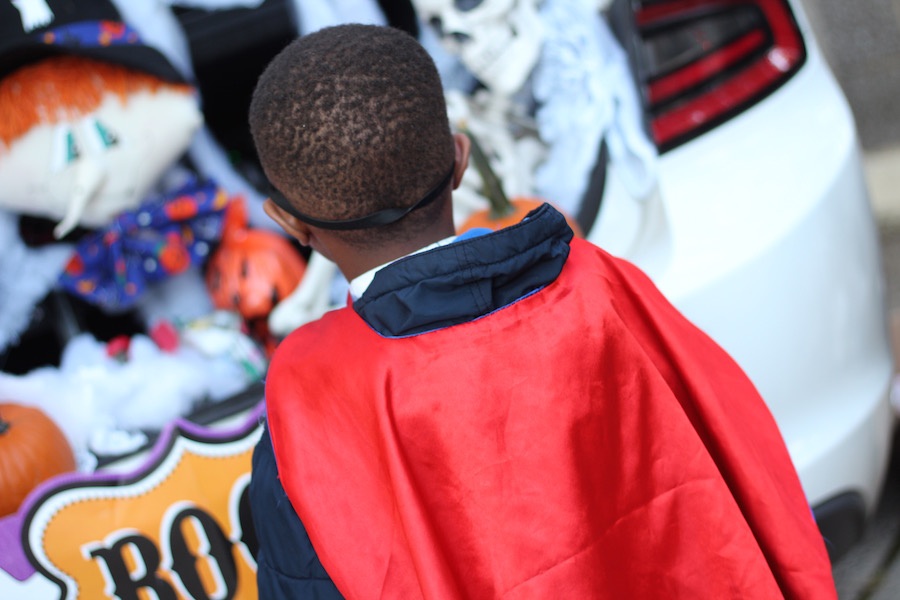 Watching him from the corner, his grandmother Megara Cave said that she was thrilled to learn about the sugar-fueled event, because it lets young kids of color interact with the police in a non-negative way. She had been preparing dinner for Cayden, who lives just down the block on Winchester Avenue, when a neighbor told her about the Halloween commotion at the substation. The two suited up—one in costume and one as herself—and headed over.

“I’m lovin’ this right now,” she said. “We need it for our young Black men, and Latino men, and white men for that matter. Right now, it’s Halloween. Right now, we are feeling good.” 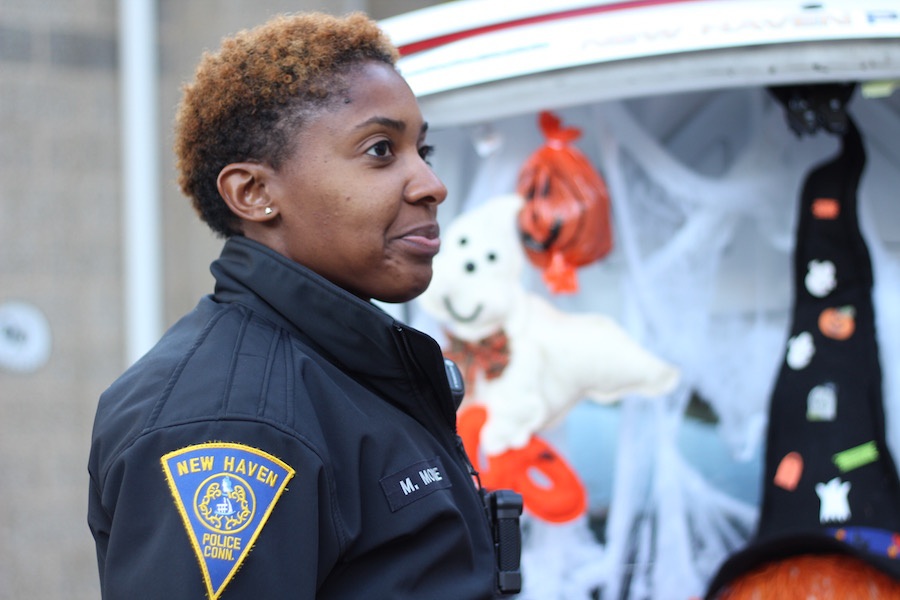 That’s the hope for the event, said Colon, decked out in a glittery harlequin mask for the occasion. As Westville’s district manager last year, she organized a Trunk Or Treat at Westville Manor, held the night before the city’s bigger Trunk Or Treat at Edgewood Park. When she was shuffled to Newhallville this year, she decided to continue the trunk or treat tradition Lt. Renee Dominguez had also started in that neighborhood. Unlike last year's event, which featured pumpkin decoration and a temporary tattoo station inside the substation, this year's was kept to outside.

In addition to the event’s low-key use of contact theory—the idea that social and physical contact between two groups can break down bias—she said it’s particularly important to give families something to do, from picking up candy to bringing home small pumpkins for the kids to decorate. As kids arrived for the evening, parents and grandparents each got a pumpkin to decorate at home, with the invitation to return to the substation and show them off next week. 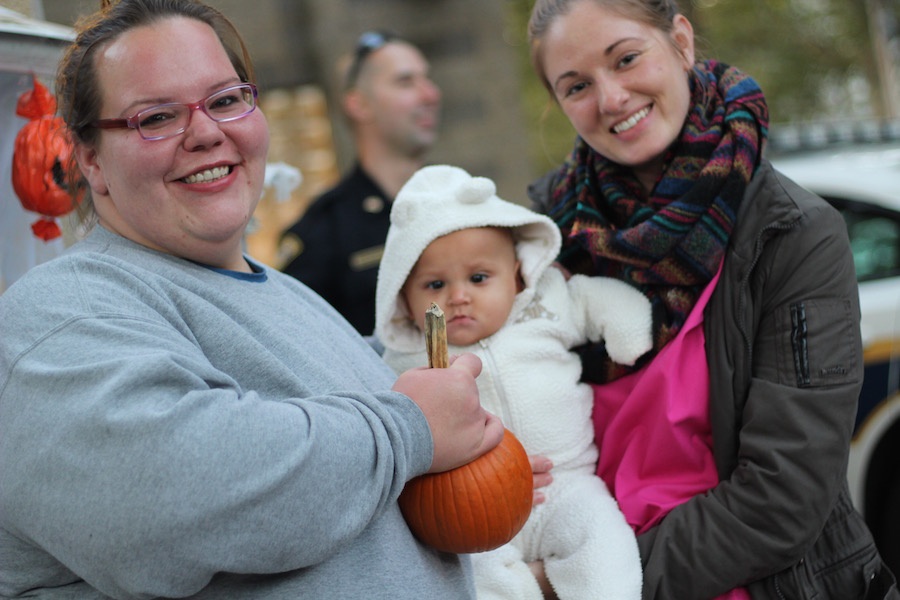 “I’d rather have kids doing something like this than going out with their friends and doing something crazy—throwing eggs or anything like that,” Colon said. “I’d rather have them come here, give them something to do, so when they get home, they’re just tired and ready for bed. I want to take that stigma from Mischief Night … it’s bad, it’s bad, it’s bad. No. I want to take that away and actually give them something positive to do.”

Just moments before, she had put that theory to the test with 5-year-old Emilee Follins (pictured below), dressed as Halle Berry’s Catwoman under a puffy pink coat. As Emilee made the candy rounds, her grandmother had praised the event for gathering kids in a safe environment. After Emilee had finished picking up candy, Colon checked in with her on the pumpkin front.

“Can I see that pumpkin after you paint it?” Colon asked? Emilee nodded timidly. Colon started to give her grandmother directions to swing by the substation when she saw her car parked outside. Then she changed her mind.

“I’d rather knock on your door, and see your pumpkin in person,” she said. 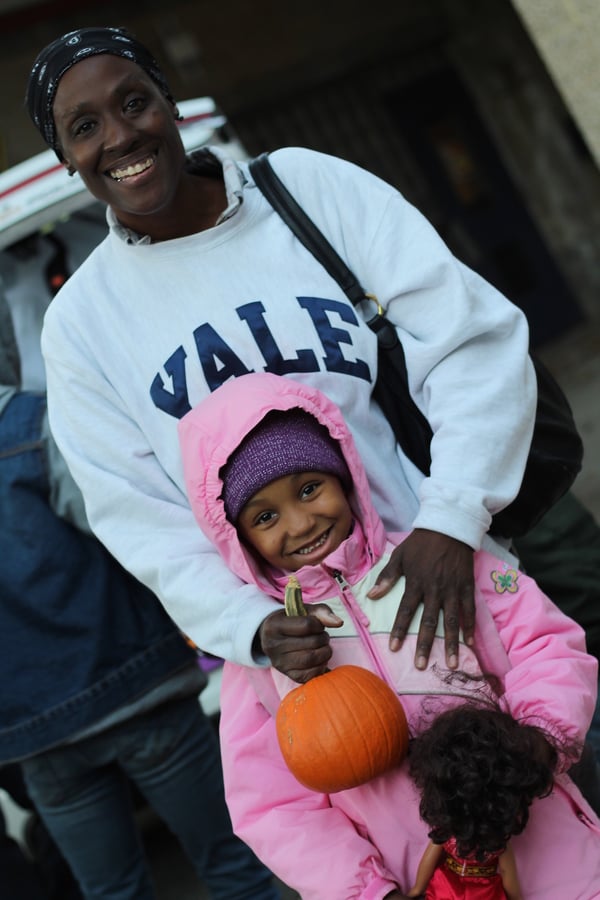