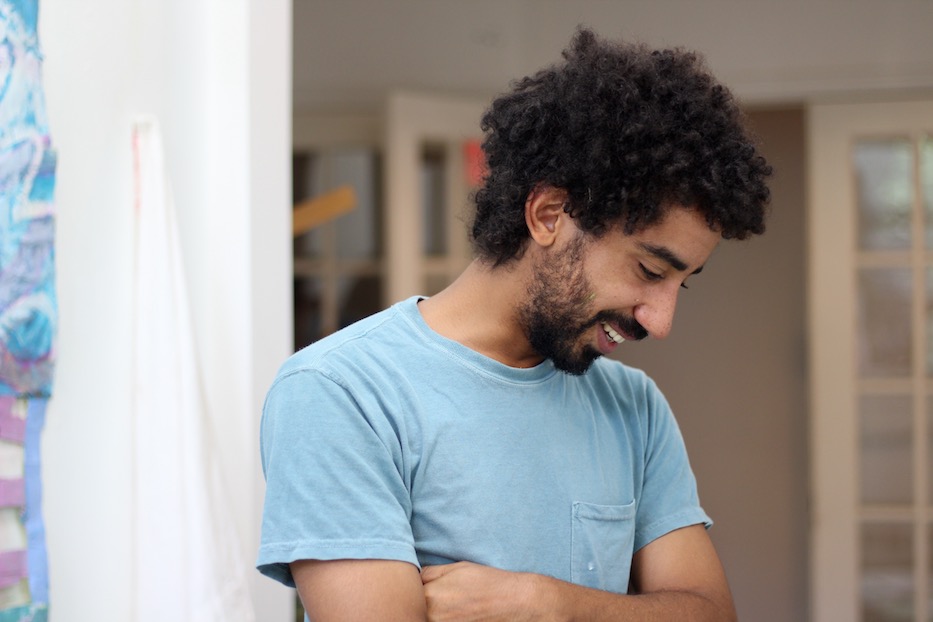 The sculptures are some of the first objects you stumble on. At least 20 of them sprout from the plaster like colorful, smooth growths—a turquoise lighting bolt here, a loop in faded green there. Small blue and yellow egg shapes stick out closer to the top. Flowers bloom beside them.

They are temporary residents here, site-specific pieces in Noé Jimenez current exhibition Jetski at the OkieDokie Country Club in downtown New Haven. The installation, which also features work by Nathan Lewis and Bu Lei Tu, runs through the end of October. The venue is open by appointment only, with a tentative open-house during City-Wide Open Studios in October.

For the artist, it marks an extension of work that he has been developing for years. Born in Harlem and raised in Yonkers, Norwalk and then New Milford, Jimenez started making art when he was a small kid, drawn to Saturday morning cartoons and later the science fiction worlds of Blade Runner, Star Wars, Gremlins, X-Men and Alien (“the first movie that really scared the shit out of me”). He loved flags, studying them intently. By the second grade, he said, "I was that kid who was always painting." 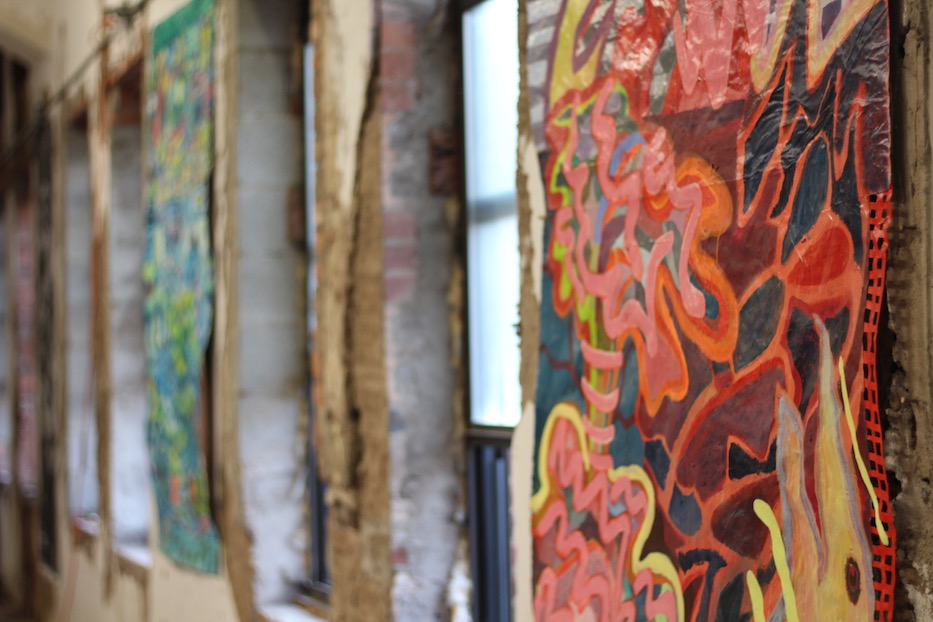 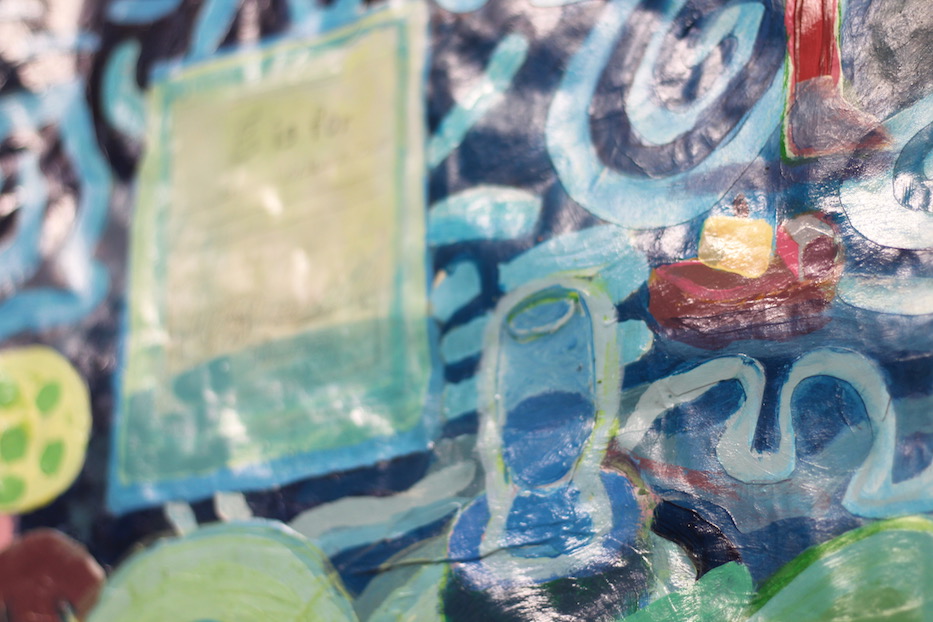 His inspiration comes from a hodge-podge of lived experience: team sports and miniature Star Trek models that he built with his dad, hours spent studying Jean-Michel Basquiat, Paul Cézanne, and Joan Miró, a mentorship with the photographer Clayton Cotterell and the bright, vibrating colors of the Dominican Republic, where he spent summers as a kid.

He said the last is still something that he’s unpacking after growing up largely in rural Connecticut, where his peers were overwhelmingly white and his paintings often appeared in constrained spaces.

“I don’t think I ever developed a style,” he said in his studio, where he often bounces between the floor and a small desk cluttered with paint and artwork. “It’s like, nothing has changed since I started painting, it’s just become more refined. I’m going with my instincts. I feel like the best ideas flow out … and I go for inspiration, impulsiveness, funniness.” 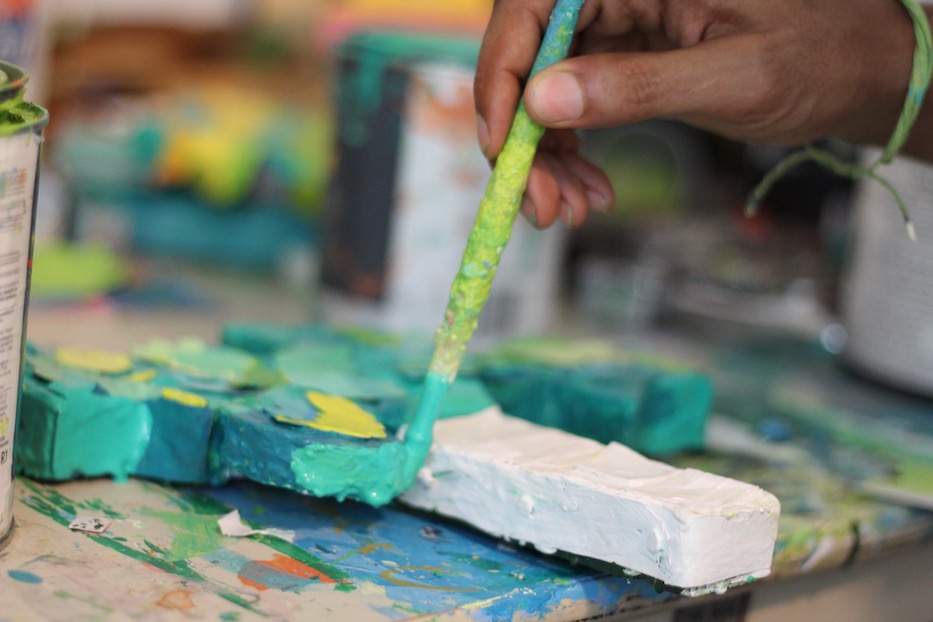 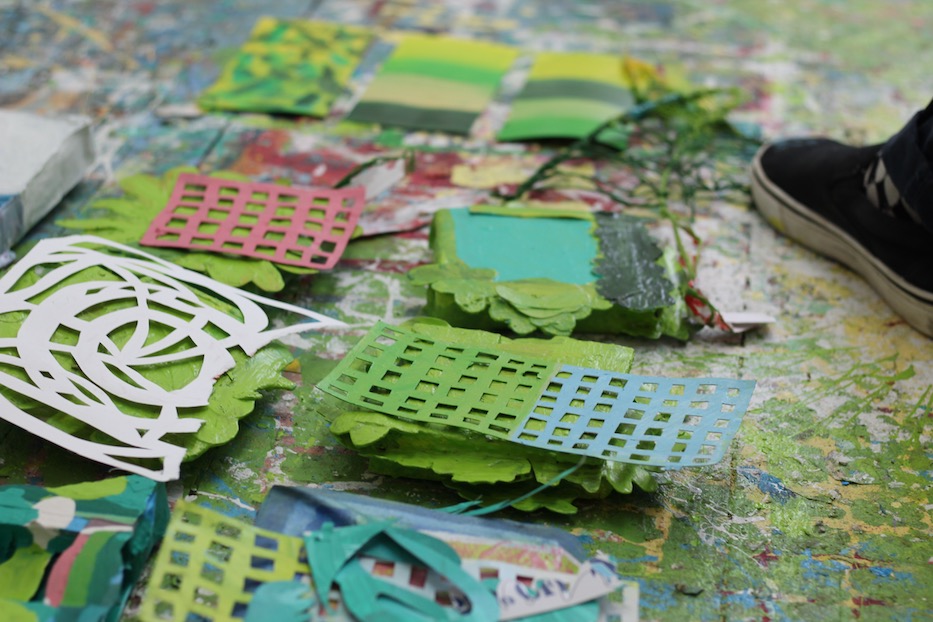 Along the way, he did develop an interest in big, often colorful art, at its best when it could be studied and handled in spaces that weren’t galleries. As a teenager, Jimenez took classes at Lyme Academy of Fine Art and then attended Paier College of Art in Hamden, growing his interest in color and texture as he sculpted, painted, plastered and papered worlds into being.

His influences deepened: he dove into the work of Martin Puryear, Stanley Whitney, and the Gee’s Bend Quilters, hopped over to Helen Frankenthaler and Agnes Martin, whose craziness endeared him immediately to her. He learned to love the empty space in between squares of netting and grids. And he observed the world around him—in addition to being a public artist he is also a skater—thinking about what unconventional spaces could hold art as he traveled through space and time.

"I realized my paintings are for things that are lived in,” he said, recalling installing a painting in his uncle’s house in the Dominican Republic a few years ago, where it hangs brightly in a big white room. “My purpose as an artist is not to make perfect things.” 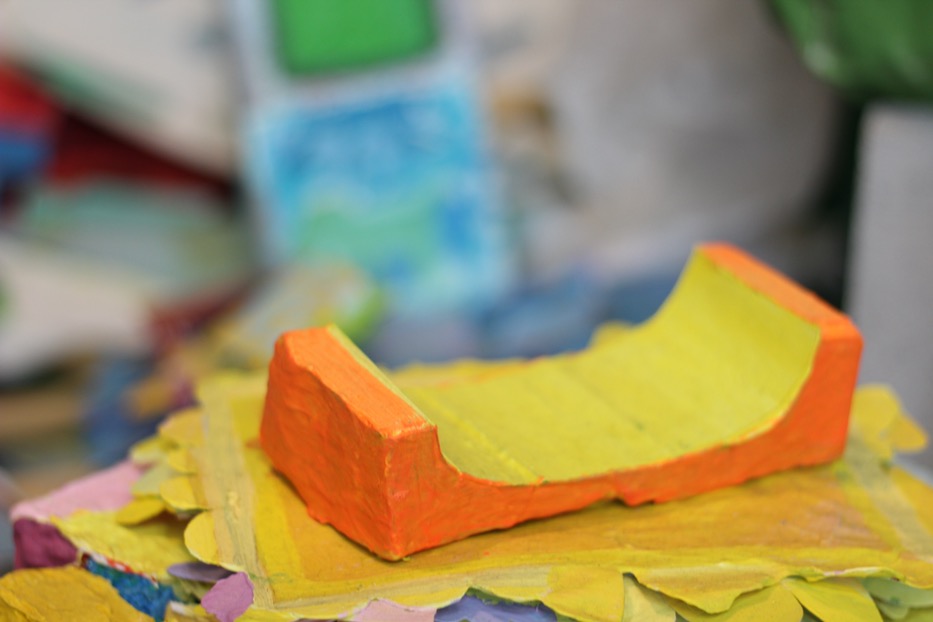 On the walls and paint-splattered floor of his studio in West River Arts, it seems that he has found that balance. A tiny, brightly painted half-pipe sits on the floor, calling out for skaters the size of toothpicks. Close to one wall, a miniature green-and-yellow soccer field sits at the ready for players, painted paper nets just waiting for a ball. A basketball hoop, the ball halfway in, winks out from the wall.

And around all of them, grids and lattices pop out in greens and blues. Some are small and neat, almost mistakable for lily pads if one looks too quickly. Others demand hanging space, as if they are not completely comfortable without a wall, or the patient tug of Jimenez’ own hands.

On the walls, a series of bright tiles and huge, recent and ongoing series on vacationing ties it all together. Jimenez said he started the series a few years ago, after noticing that most people related to the Dominican Republic as more of a concept than a lived-in place. When he spoke about his family, he recalled, they’d respond with an anecdote about a recent vacation or week-long cruise.

“It’s about visiting this place that feels like home but isn’t home,” he said. “There’s what’s projected about a place, and then there’s the reality. So it’s complicated, but it’s also great.” 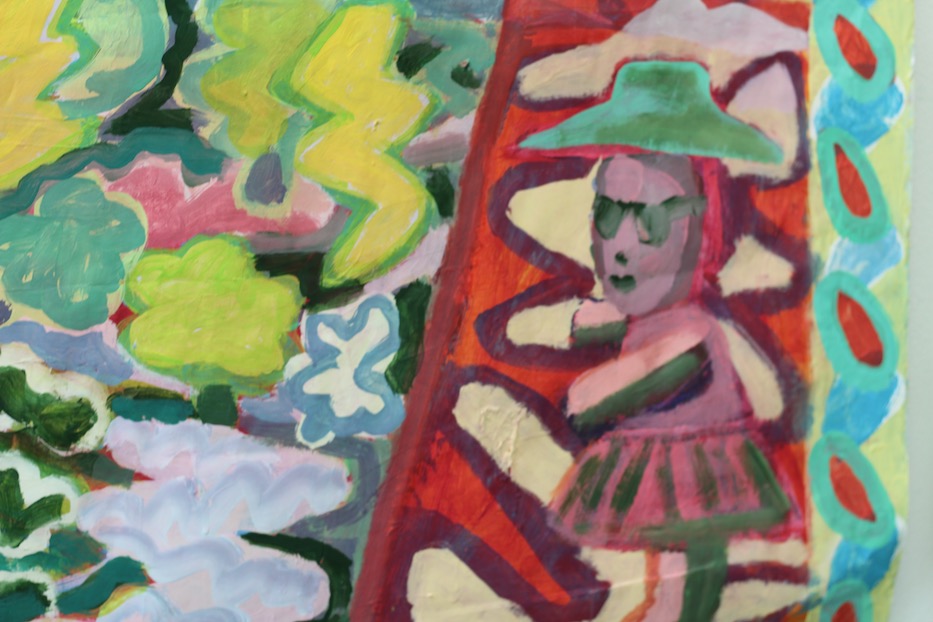 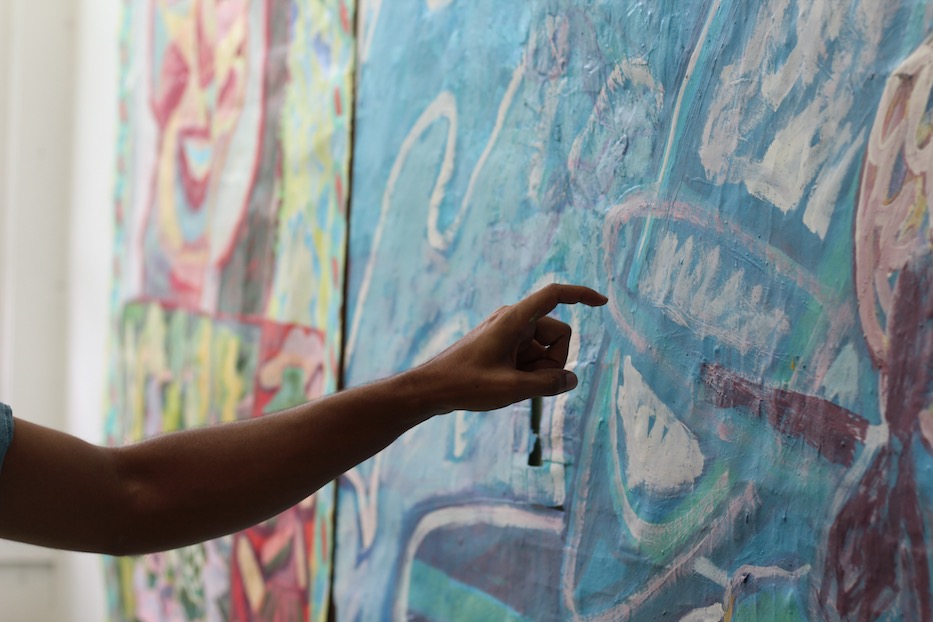 Back downtown, the OkieDokie Country Club is in some ways an amalgam of that work. The idea for the OkieDokie Country Club—or the OkieDokie CC, as Jimenez called it in a press release—was born when the artist first saw the space several months ago, and started thinking about its size and potential. The communications and arts coordinator for the Westville Village Renaissance Alliance or WVRA, Jimenez spends much of his time coordinating public art projects in Westville, from CWOS’ now-annual Westville Weekend to mural projects in the neighborhood.

But downtown has been calling him too, he said. After scoping out the location, he could envision filling the space with big, bright multimedia pieces that engaged the cavernous, gritty feel of the room. He roped in Tu and Lewis, the latter of whom has wheat pasted three drawings onto the gallery’s walls. He sized up the space, a vacant room with storage for skateboarding equipment, then started turning it into a gallery.

“I just walked in here and it spoke to me,” he said at an opening last week. “This is all a response to the space.” 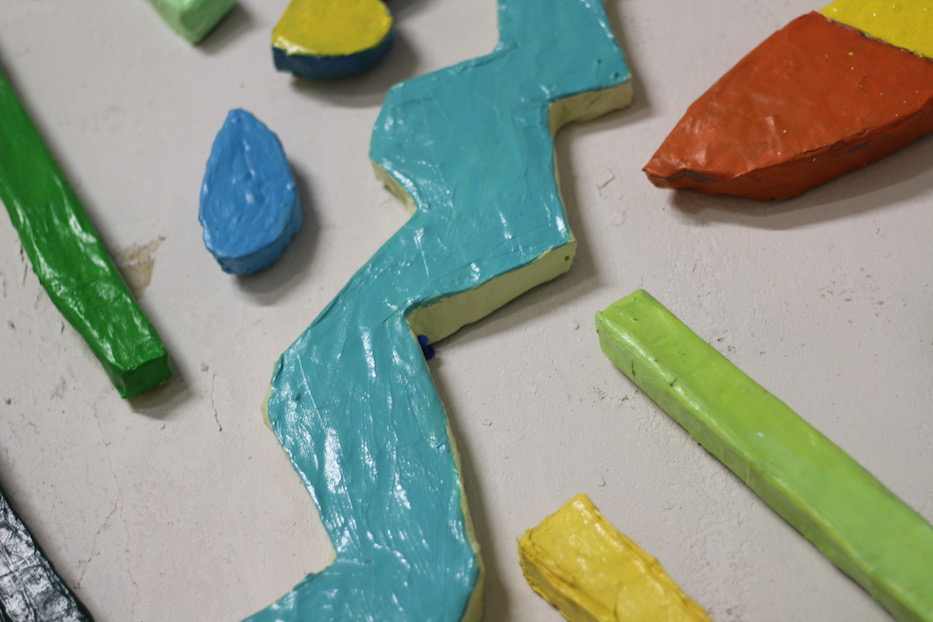 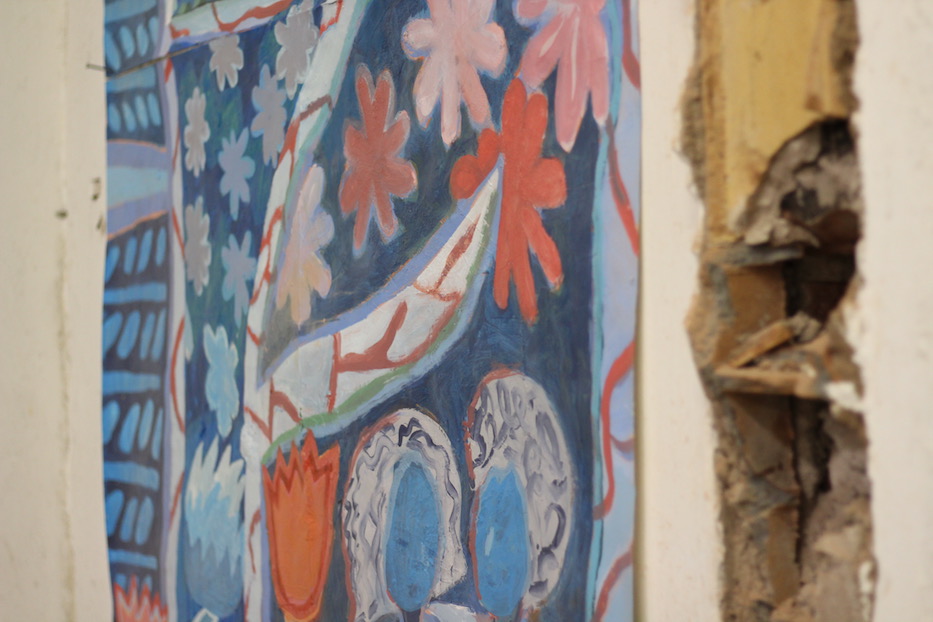 From its vacant state, the space has been transformed with an assault of color and texture that greets viewers as soon as they exit the elevator. It’s still a big, empty room—there’s no getting around that—but the dynamic has shifted. Instead of cutting through as quickly as possible, you want to stay and look for a while among the dusty beams, chipping paint and rough plaster.

Along one wall, Tu’s ink drawings stop the viewer in their tracks, equal parts cacophonous and delicate. In one, a face turns to look out at the viewer, thick hair trailing in rivers behind it. The longer one looks, the more faces emerge: at least three directly to her right, upturned and flat as masks. Then one to her left that seems to split and spin even as the paper remains still.

Another is halfway submerged in front of it. From the horizon line, a large, unfriendly seeing eye takes it all in. The space around it becomes part of the work: the fibers in the rice paper have a sort of cross-talk with the wall behind them, where the plaster is pockmarked or missing entirely. It’s a rebuttal to the buttoned-up, sanitized gallery that feels welcome and overdue. 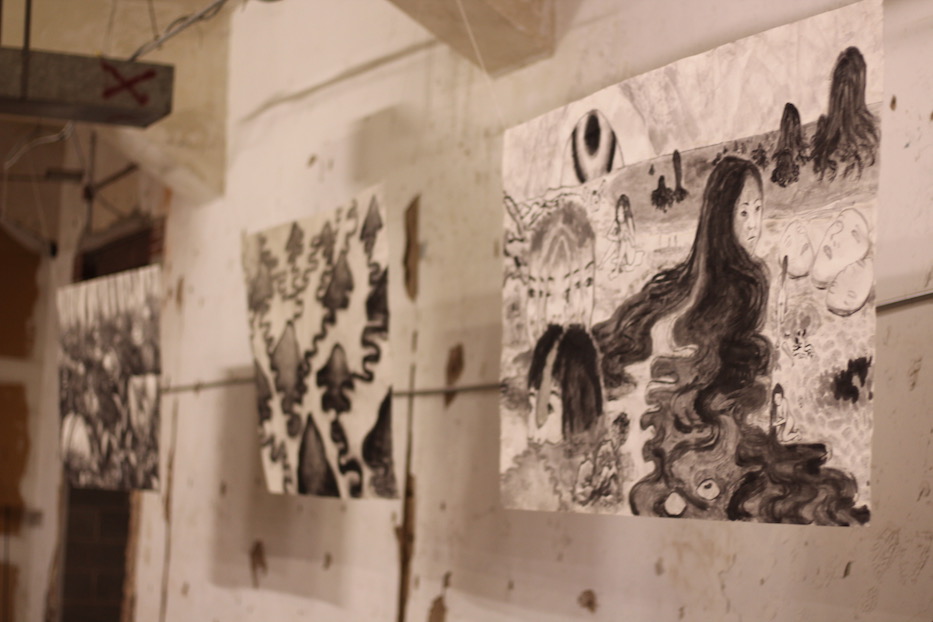 On a far wall, a suite of images are unmistakably Jimenez’, bright against plaster and exposed brick. In one, pink and orange squiggles give way to something that approximates a tree, but sprouts fat appendages where it seems there should be branches. In another, Jimenez has launched kind of New Haven nostalgia: a friend’s grade school assignment doubles as an ode to Edgewood Park, where Jimenez still skates, years later.

They are spirit-lifting: a riot of color in a room that used to have none. And they are deeply tactile too: to the urge to reach out and touch the works, to feel their glossy surfaces, to stick one’s fingers in the empty spaces, the artist gives full permission.

“I don’t consider my work precious,” he said. “As objects, you’re allowed to touch them, and press them, and even damage them a little. They’re living, breathing things.”

To schedule an appointment at the OkieDokie Country Club, email eon.jimenez.noe@gmail.com.