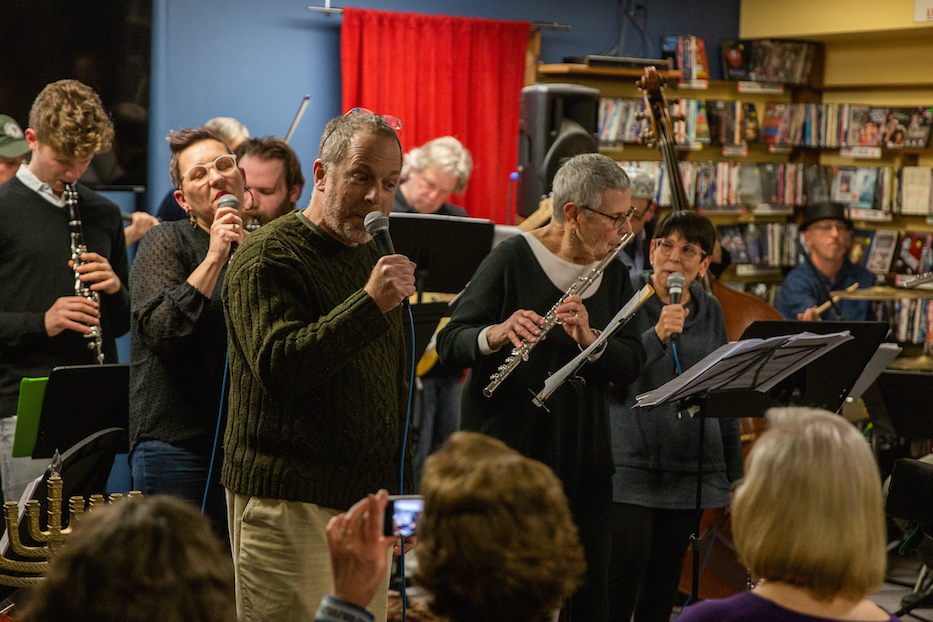 Musicians from the Nu Haven Kapelye were still tuning when someone called out from the back of the room with seeming urgency.

“Did the menorah ever get plugged in?” they yelled. A moment later, an extension cord was passed from through the trumpets to the saxophones on to the lone cello. A hand found its way to a socket. The first glimmering red bulb of nine flickered on.

Sunday, the Nu Haven Kapelye landed at Hamden’s Best Video Film and Cultural Center in its first of two Hanukkah performances this week. The second takes place on Dec. 25th at Congregation Mishkan Israel in Hamden. Tickets and more information are available on the group’s website.

“What do you if you’re Jewish, living an in an undeniably Christian world on December 25th?” said bassist David Chevan, who founded the group in 1998. “The joke is you eat Chinese food, you go to the movies, you go to Broadway. But why not create something that’s just its own thing, that’s nothing to do with December 25th being celebrated within the larger community? This gave us something to do that was Jewish.”

The greater New Haven-based klezmer band has been playing in some form since 1998. Membership is an open and rotating door. Anyone, Jewish or not, musical or not, is welcome to join.

Musicians filled the stage, aged middle schooler to octogenarian. There were four saxophonists, three clarinets, three violinists, two trombonists, two flutists, two vocalists and one each of accordion, cello, guitar, trumpet, upright bass and drums. Save a few missed cues and stray notes, the musicality of the group was as tight as the packed video store.

Much of that musicality comes from the youngest in the bandwho shared solos with several junior and senior members of the group. One young clarinetist led the band in his own arrangement of “Niggunim,” Hebrew for “wordless melody,” as well as a song played at his parents’ wedding. The room fell wordless as his clarinet wandered along the mournful tune, supported by Chevan’s ever-present upright bass.

That inclusion is an intentional move by Chevan, who is actively trying to recruit for the band. Many children, including Chevan’s own, joined the Kapelye at a young age and grew up with the group. During the concert, he made his pitch for joining the group—and to his delight, a few young hands in the audience shot up.

“I've tried over the years [to give] kids a way of doing something that is Jewish, but isn’t religious, but is undeniably part of Jewish culture,” he said.

He added that he is looking forward to the Dec. 25th show, during which former members often return to play with the group. Twenty years ago, the first concert took place at Mishkan Israel—which happens to also be many band members’ synagogue—during a wider klezmer revival in the music world. Back then, Chevan and his friends were curious in the genre and trying to “figure it out.” 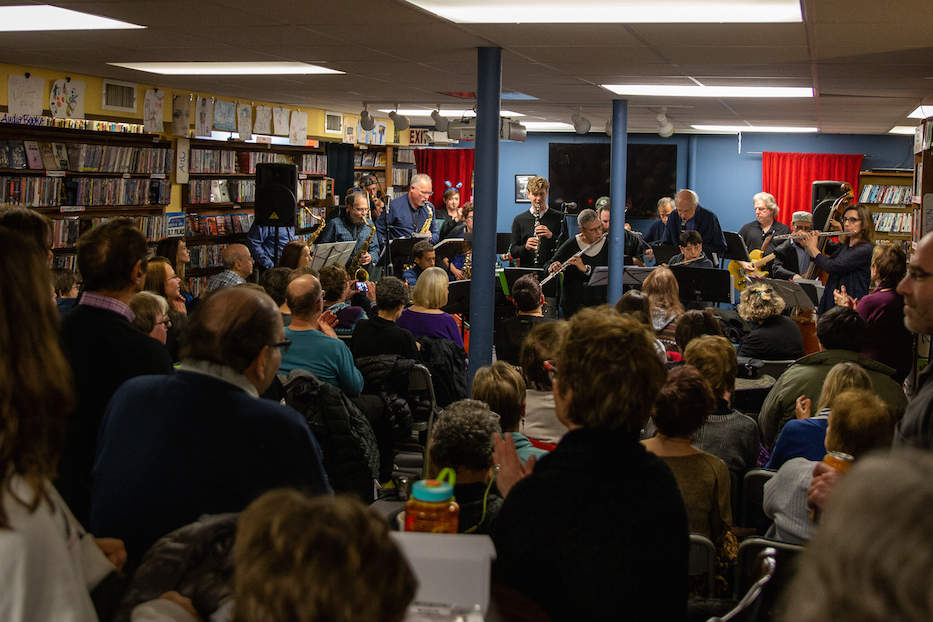 That year, the first kapelye—a Yiddish word-meaning a group of musicians—came together to play klezmer, a term Chevan used as a descriptor of Jewish celebratory music. The Nu Haven Kapelye has played on since in yearly December 25th concerts, bar and bat mitzvot, weddings, retirement and assisted living communities and festivals.

Drummer Jay Miles recalled feeling devastated after his first practice with the group, unsure that he could master the form.

”Klezmer’s really about littler things,” he said, illustrating rhythm patterns as he set up his drums. But once he figured out the musical idiom of klezmer, “songs that I didn’t even know, I felt like I knew them. They were just kinda in the DNA.”

At the end of the evening, accordion player Dana Astmann said she wished there’d been more room.

“This crowd would have danced,” she said. With the band’s new status as a 501(c)(3) not-for-profit and the formation of a board, she explained that the Kapelye’s future may include traditional dance as well as education and a second studio recording. The group's first album, What's Nu?, was released in 2016.

Around her, clarinets were packed up and cymbals crashed back into their cases. Performers received hugs and “Happy Hannukah’s.” The group disbanded, with the understanding that the next group of performers could look entirely different. Astmann took in members of the band as they bundled up to head into the December night. She smiled.

“We’re the kind of band, where whoever shows up are the right people.”