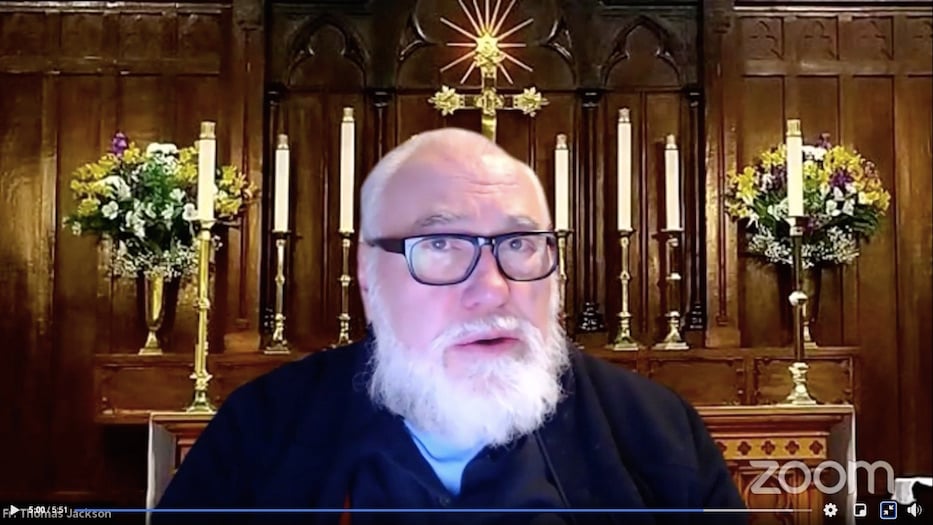 Father Thomas Jackson always planned to lead a service on the Feast of the Epiphany. He just never counted on it including a blessing for Congressional safety and sound government.

Jackson brought those words to St. Luke’s Episcopal Church Wednesday night, in a Zoom service for the Feast of the Epiphany that doubled as a prayer for the nation. It came just hours after domestic terrorists entered the U.S. Capitol Building and staged an attempted right-wing coup. One woman who was shot inside the building was later pronounced dead.  Washington officials later said that four people had died in the violence both in and outside the building.

A few dozen attended the service online. As of Wednesday night, Congress had reconvened to certify Joe Biden’s victory as the next president of the United States.

“Although we are not, as a clergy, focused on the partisan battles that are unfolding in our nation’s capital, it is appropriate for us at this time to pause and say a few prayers and call Lord’s mercy and call God’s action and God’s justice a little closer to this place and this time,” Jackson said.

“This has surely been one of the most unusual Epiphany days that I can remember, and perhaps that we've had in the history of our country,” he added before he opened a 40-minute service with Josh Huber, a graduate student at the Yale Divinity School.

Celebrated each year on the 12th day of Christmas, the Epiphany (also recognized as Three Kings Day or Día de Los Reyes and La Befana) commemorates the day that three wise men, guided by only a bright star, made their way to Bethlehem bearing gifts for the baby Jesus. True to its name, the date marks the epiphanic realization of Christ’s divine presence and power.

For Jackson—a longtime activist who has never been quiet about his view of Christ as a radical—the day is also about mining an old story for new and current meaning. After taking over as priest in charge at St. Luke's in 2019, he’s worked to be responsive to the needs of the community and the events around him. While the pandemic has closed the physical sanctuary, services have continued online. So when his Wednesday turned upside down, he let it shape the service.

His day had started quietly, he said in a phone call Wednesday evening. When he left the house, Rev. Raphael Warnock had won his battle to represent Georgia in the U.S. Senate. Things were starting to look good for fellow candidate John Ossoff. In New Haven, Jackson came into the sanctuary early, to record a video meditation that the church will be using this Saturday. He prepared for a four-day anti-racism workshop that St. Luke’s is starting this weekend. He looked ahead to the church’s Martin Luther King, Jr. Day programming, which will unfold online later this month.

“I was in a good mood,” he recalled. “It looked like the Dems were going to take the Senate, and I walked into the church and turned on the computer. And then my husband said, ‘Turn on the news.’”

He took a moment to adjust to what he was seeing. On the screen in front of him, white nationalists had gained access to the U.S. Capitol Building and were filling its halls and pristine rotundas, smashing windows and waving flags that pledged allegiance to Donald Trump. Police weren’t stopping them; some were posing for selfies as others appeared to open entrances.

The Episcopal Church and the Episcopal Church in Connecticut had not yet released statements condemning the violence, although both did just hours later. In an instant, he knew that he was seeing history that “changes what it meant to be an American.” He knew it needed to be part of the evening’s service.

Wednesday, he joined the Episcopal Church in Connecticut in leading a prayer for peace, pulling it up on a screen so congregants could follow along. As a single, heavy breath signalled his presence, he began to pray with congregants across the city. Somewhere in his office, the Book of Common Prayer also sat open, waiting with a prayer for sound government.

“The violent attempted take-over of the seat of government of the United States is incongruous with our nation’s tradition of law and order,” he read from a statement from Revs. Ian Douglas and Laura Ahrens. “As Americans and as Christians we must denounce these illegal and seditious acts that threaten our democracy. The soul of our country is at stake.”

As the Epiphany service began, a Facebook live feed chattered with prayers for the country. Viewers began to tune in, a number climbing in the lefthand corner of the screen. In a chat beside the livestream, messages popped up with hearts, red roses, and Black and Brown emoji hands pressed together as if in prayer. A few messages became over three dozen in a matter of minutes.

“Lord have mercy on us,” wrote Hattie Evans. “Lord grant us peace.”

“Lord keep this nation under your care and guide us in the way of justice and truth,” added Valerie Jackson-Pittman. “Amen.”

Huber urged congregants to reflect on the fact that darkness—often perceived as purely evil—still plays a part in making way for light. In the gospel of Matthew, the three wise men are only able to see the star because it is dark. Wednesday, the gospel echoed as darkness descended on Washington. As it fell around the Capitol, it was still unclear what light would come out of it.

"Might we consider how the dark is also necessary? Indeed, you need the dark to see the stars," he said. "Friends, this joy—the joy of epiphany, the overwhelming joy that took hold of the wise men from the East—was for them a joy that took a long familiarity of walking in the dark.” 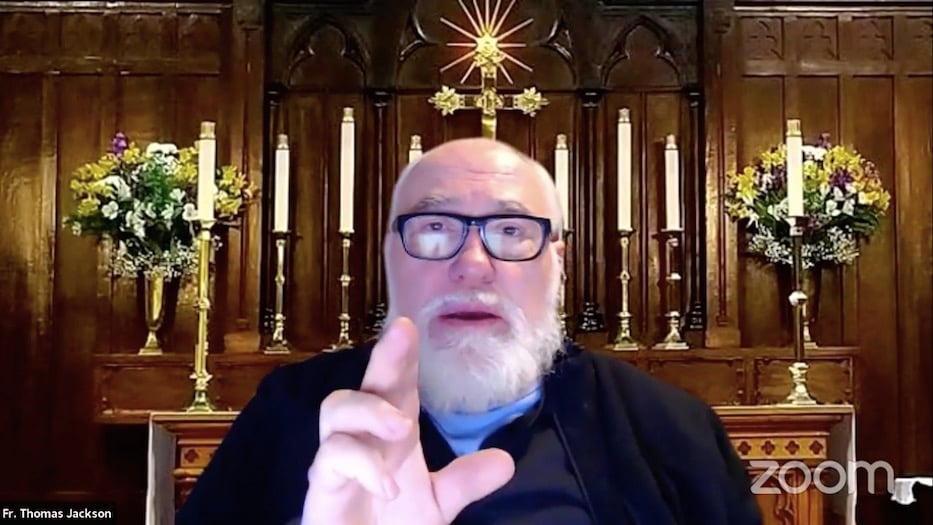 In a conversation after the service, Jackson said that he finds the Epiphany particularly rich in meaning this year. In part, he loves the image of the three magi, looking up at a single, bright star to make their way to Jesus. He’s also moved by the thought of them bringing gifts on the long journey from far-off lands. He has a painting of the three kings by the Chinese artist He Qi in his home, and said he never stops being moved by it.

“It draws me to the realization that everyone has a gift to present to the community, to the country, and to their neighborhood,” he said. “So now we as Christians have to bring the gift of nonviolence, the gift of reconciliation, the gift of social justice. Jesus was not a namby-pamby white dude with blue eyes and blonde hair who got along with the Roman government.”

“Are you going to stand for mob violence, encouraged by some of our politicians, or are you going to believe in a democracy?” he continued. “The most appalling thing as a pastor is to see people in the crowd carrying signs purporting to be doing things in the name of Jesus, and committing these acts of violence. We’re gonna work and we’re going to try and fight.”

He said that Wednesday also reminded him of the hold that white supremacy has had on the country for hundreds of years, and continues to have today. Watching white, Confederate flag-waving domestic terrorists enter the building Wednesday, he was reminded of how quickly law enforcement turned to force and aggression during Black Lives Matter protests last year.

He saw the same show of aggression last June, when Trump used law enforcement to disperse a crowd by force so he could pose with a bible in front of St. John’s Church in Washington. Protesters had gathered peacefully in Lafayette Park when police began to use tear gas to drive them away from the area. Wednesday, police let people roam the halls, enter offices and congressional chambers, and smash the building’s windows without shooting. 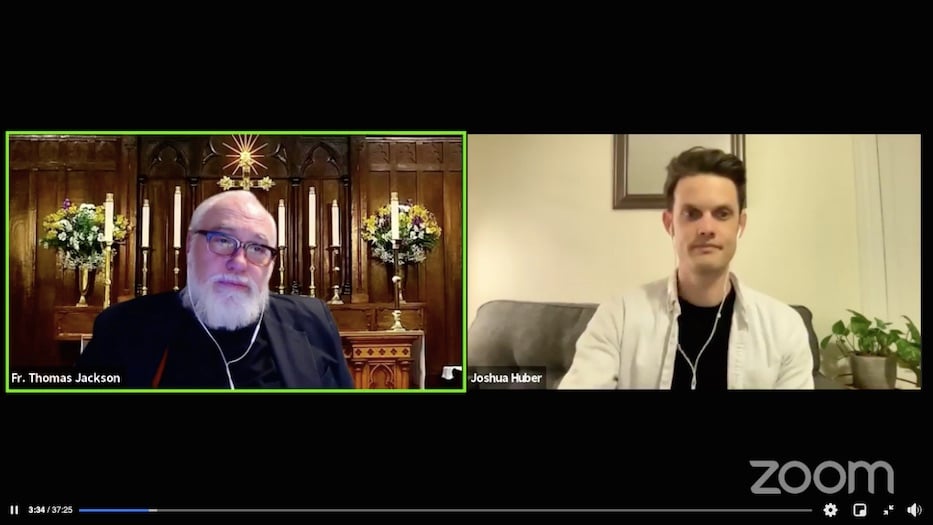 Wednesday evening, the Episcopal Church in Connecticut released a formal call to prayer condemning the violence in Washington. The full statement is below.

We write amidst the turmoil and violence in Washington D.C. as supporters of President Trump have breached the security of the United States Capitol interrupting the process to certify the results of the 2020 Presidential Election. The images coming from the Capitol are both horrifying and deplorable. The violent attempted take-over of the seat of government of the United States is incongruous with our nation’s tradition of law and order. As Americans and as Christians we must denounce these illegal and seditious acts that threaten our democracy. The soul of our country is at stake.

We call all Episcopalians in Connecticut to pray for peace both in Washington D.C. and across our nation. Let us pray for safety for those in harm’s way, and especially for the protection of law-enforcement professionals called to guard the people and places of our government. Let us pray that our nation’s leaders will exercise appropriate authority to de-escalate the violence in Washington D.C. And let us pray that peace will prevail so the joint session of Congress may reconvene in order to ensure a peaceful transition of power in our nation.

O God, you have bound us together in a common life. Help us in the midst of our struggles for justice and truth, to confront one another without hatred and bitterness, and to work together with mutual forbearance and respect; through Jesus Christ our Lord. Amen.