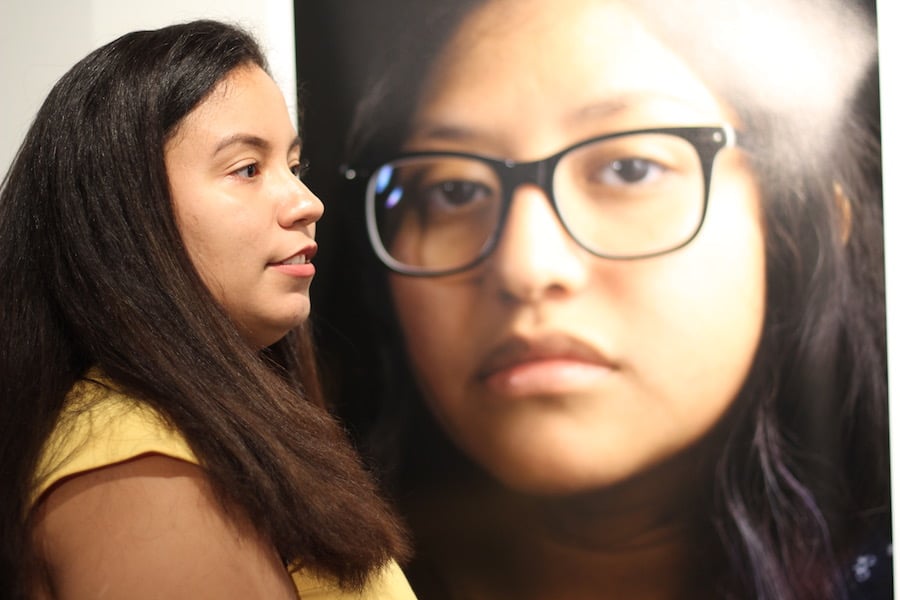 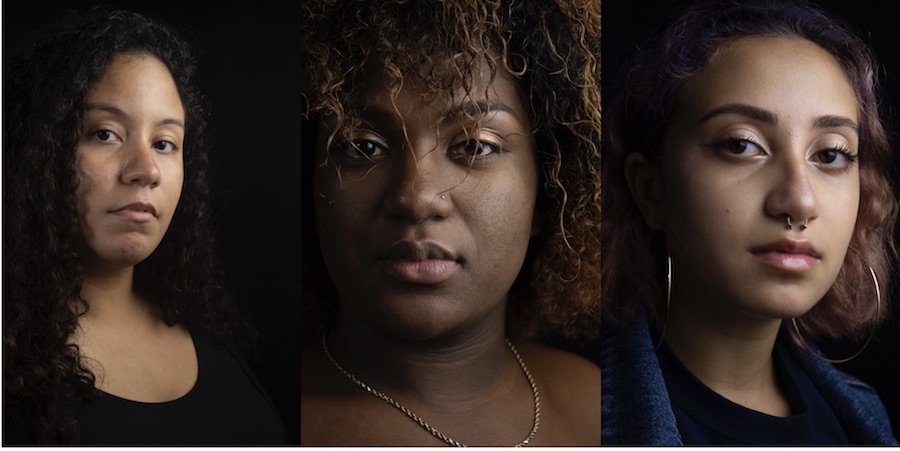 It’s a warm but guarded kind of greeting. Eleven faces turn knowingly outward, lips pursed. Breath passes in and out and in again. Eleven different skin tones, from café con leche to cocoa, wink out at viewers. Eleven hairstyles, kinky and wavy and straight, run past shoulders and stop at chins. Twenty-two vigilant eyes follow you around the room, asking for a second look.

These faces comprise Collective Portraits: An Authentic Look into Hispanic Culture, running now through Oct. 20 at Albertus Magnus College. The exhibition, timed to coincide with Hispanic Heritage Month, features portrait by Albertus Magnus senior Alyssa Cruz. This Saturday, the college will host an open house for the show, installed at the Margaret L. MacDonough Gallery in the Hubert Campus Center.

It’s an intimate and striking look at women of color, by a woman of color. Unlike Joe Standart’s WE ARE: A Nation of Immigrants or Rob Goldman’s I Matter series—both portrait projects by white men depicting people of color—Cruz’ starting point is her Puerto Rican heritage, and hope to dig deeper into it. It’’s the most in-depth project she’s done in five years of taking photos, a practice she started while riding the school bus from her native Bridgeport to Metropolitan Business Academy for high school. Nothing feels cursory about her approach, like the project could continue long after the images have come down, and she has graduated in the spring. 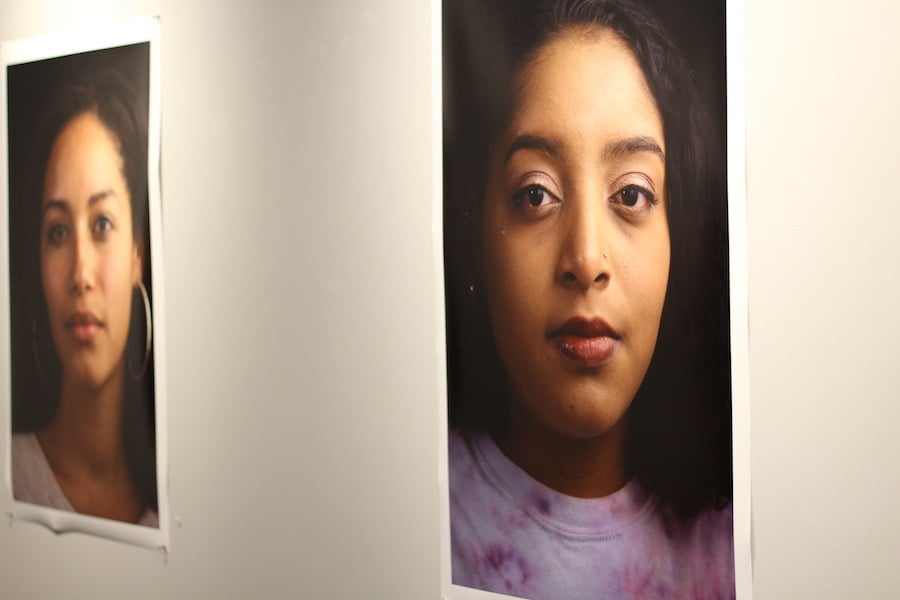 For Cruz, who is majoring in Graphic Design with a minor in Computer Information System, the series has been over a year in the making. In the fall of 2017, she was accepted into Albertus Magnus’ Aquinas Scholars program, a year-long independent study where students work with a faculty member to design and complete a project of their choosing. Cruz, who is Puerto Rican and grew up in Bridgeport, proposed an in-depth look at Puerto Rican women.

Around the same time, she started looking into her own ancestry online. She discovered a background steeped in the broader Afro-Caribbean diaspora—bloodlines from Portugal, Spain, and the Taino people, but also Cameroon and Congo, Benin, Europe and the Middle East. She found herself looking around at fellow Latina students and wondering what history they had pulsing through their veins.

That’s where the Collective Portraits came in. As she dove into research on Puerto Rico, a second project took shape: a series of portraits of and interviews with Hispanic women on campus. Classmates, longtime friends, and alumni of the college stepped forward—Puerto Rican, Peruvian, Ecuadorian, Dominican, Cuban and Middle Eastern, Puerto Rican-Jewish. She invited each to a studio, making time to get to know them before she took their portraits. They told her how they wanted to pose: fierce, vulnerable, pugnacious, somewhere in between. She kept post-production work to a minimum. 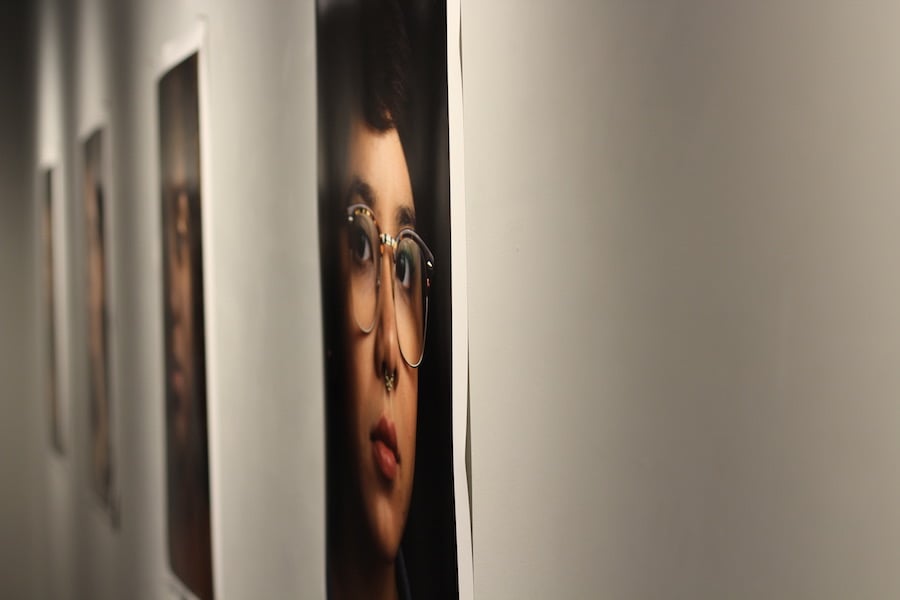 Now, the images bring the gallery to life. In one, graduating senior and proud Boricua Shania Lee looks directly out at the viewer, lips full and deep red. In a sea of jet-black hair—straightened, in this case—two hoop earrings glint out like little stars. Her nose rises squarely to her eyes, perfectly square between them. She doesn’t seem impressed by your presence. She doesn’t need to be.

In another, senior Janet Rios tilts her head to the side, doe eyes framed in big, tortoise-shell glasses. Below them is her bud of a nose, with a gold septum ring made of interlocking hearts. A swoop of hair comes over her brow. Look at me, she seems to say. Is that the best you got?

Even Cruz opted to be photographed, handing over her camera to a friend and posing against a black drop cloth. In the image, has chosen to wear her hair naturally, waves coasting past her shoulders. Her lips point downward in an almost-scowl, eyes full of fire. Whatever the future has in store for her—she said she would like to travel after graduation—she’s ready for it.

At an opening Wednesday night, Cruz bounced from portrait to portrait, chatting with attendees who trickled in. She gave tours of the show, describing each woman individually as friends and family showed up at the door. She took a moment to pose for a selfie with sophomore Maya Martinez, who is on the pre-medical track in hopes of becoming a surgeon.

“Oh my goodness,” said Martinez, who is Dominican. “This is my culture, my life. It’s for the kids who will come after me. I love it.”

Cruz said that the project is not intended to be political, despite views that the current administration has expressed on immigration, deportation, and women’s rights. She has her own feelings about the Trump administration, she said—but she wants to keep them out of the gallery, and out of her practice. While she has noticed that “I feel Hispanic students get scared to be themselves” around campus, she sees Collective Portraits as a nonpartisan approach, more interested in what these women have to say about themselves than about the president, or national policy.

‘The part I tried to get across was their true, authentic selves,” she said. “Their natural selves. These are their truths.”

Collective Portraits: An Authentic Look into Hispanic Culture runs now through Oct. 20 at the Margaret L. MacDonough Gallery, room 103 of the Hubert Campus Center at Albertus Magnus College. The gallery is open for a campus open-house this Saturday (Oct. 13) or by appointment. Contact the artist directly at adcruz@albertus.edu.