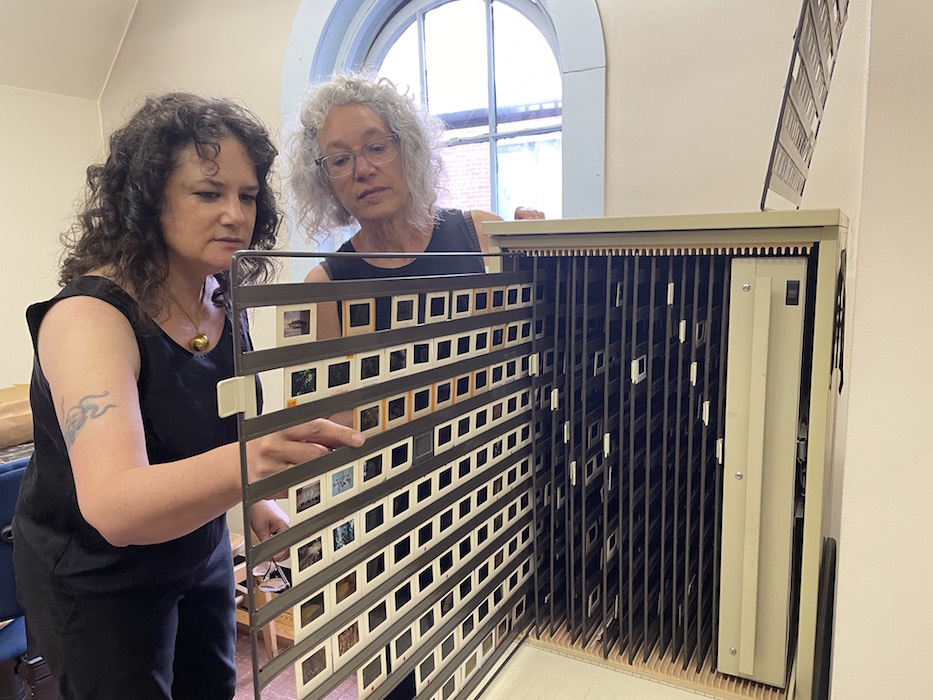 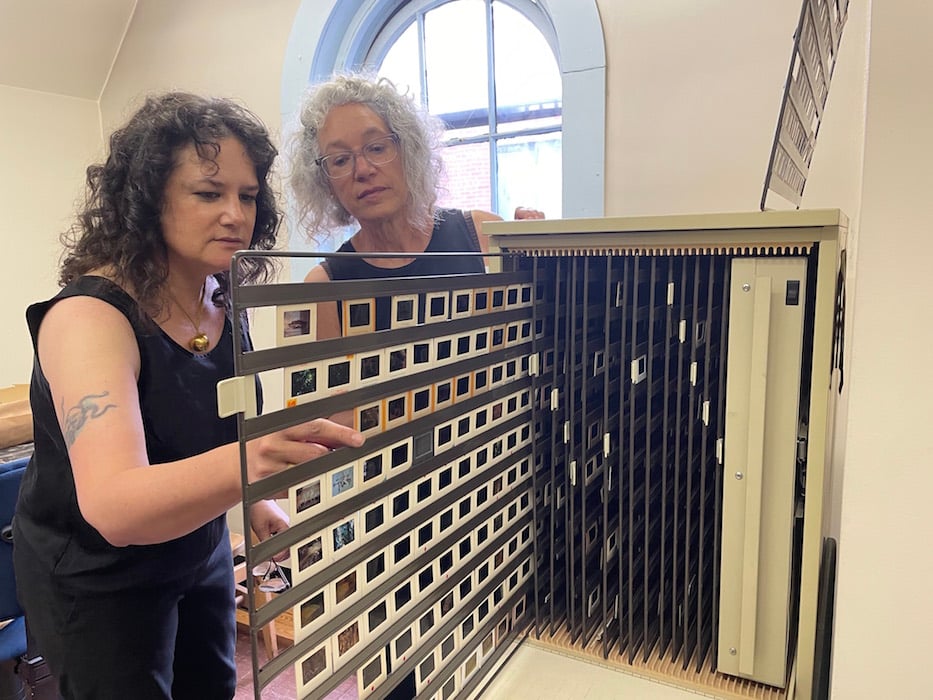 Nestled among the tall trees and squat greenhouses of the Connecticut Agricultural Experiment Station (CAES), sits a small, boxy brick building. Originally one of the station’s first laboratories in the 1880s, the Osborne Library now houses the archives of countless experiments done at the CAES over the last century. Old metal filing cabinets hold folders stuffed with photos of healthy and diseased corn. Thick volumes of plant research fill the bookshelves with yellowed pages.

Once hidden away, these collections are getting a second chance at life in the form of an installation at the Jenkins-Waggoner Laboratory just across the station parking lot. Plants and Insects: Excavating The Archives comes from artists Martha Lewis and Marion Belanger. It is open to the public during the station’s open hours.

In 2017, the station put out a call for artists to create a permanent art installation in the Jenkins-Waggoner Laboratory. Specifically, the art was intended to center around the Osborne Library collection, which documents CAES’ rich history as the first station of its kind in the country.

Belanger, who is a landscape photographer, and Lewis submitted independent proposals. But after running into each other at the station, the two friends decided to collaborate instead.

“And we’re so glad that we did!” laughed Lewis at an exhibition opening on Tuesday.

“It would not have been as rich with just one of us,” added Belanger. 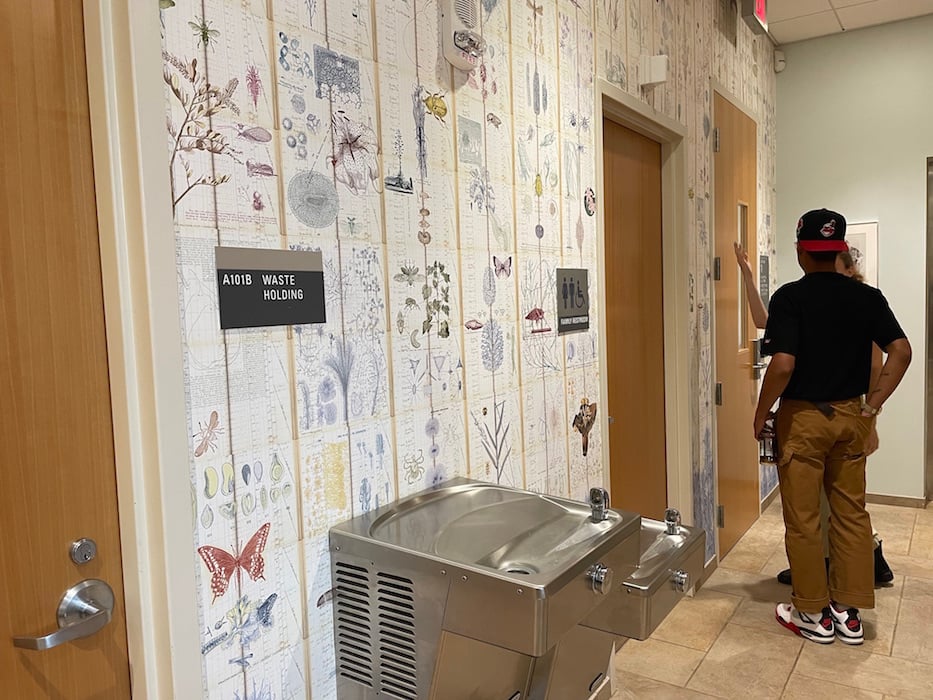 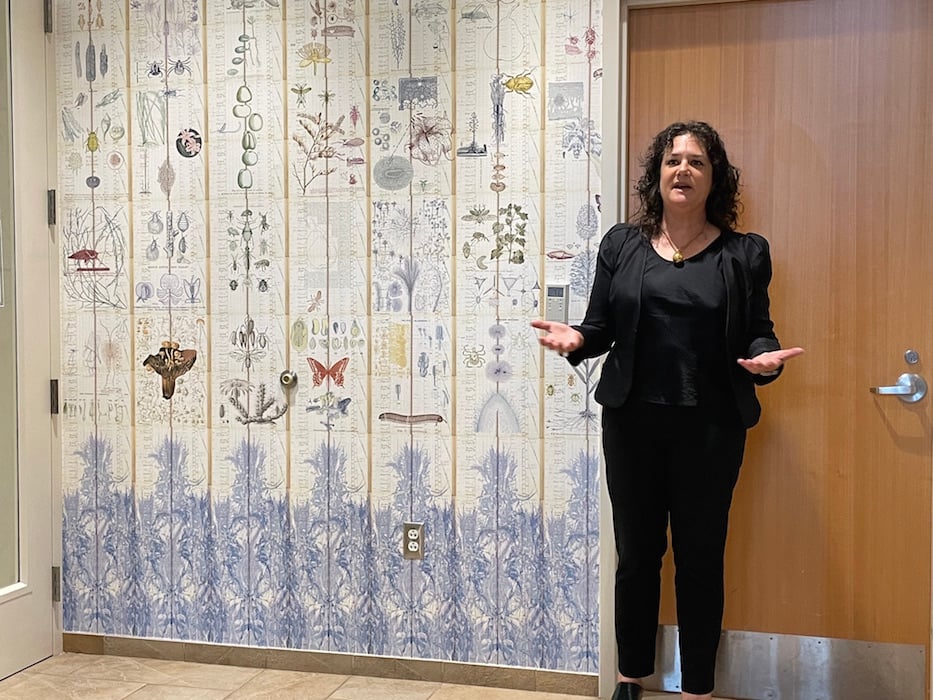 The two began by spending long hours in the library poring over weather charts, insect photographs, and detailed botanical drawings, all left over from various research projects. “It was amazing,” said Belanger. “The library, the photographs, the history that was there.”

As the two grew more acquainted with the collection, they wanted to include not just the contents of the archives—pictures and text—but the tools and process of archiving as well.

Several years and a pandemic later, their installation now graces the atrium, lobby, and hallways of the Jenkins-Waggoner Laboratory. Four pieces of different media comprise the installation, including ceiling to floor wall coverings, enlarged prints framed in silver frames, and a digital slideshow on a wall-mounted monitor.

“The whole idea was to take the CAES, its history and archives, and make a living museum out of it,” said Lewis. By turning the collection into pieces that the public can interact with easily, they hope to make it more accessible to visitors.

Every day members of the public visit the CAES, bringing plants, insects, or fertilizer for scientists to test and analyze. Where visitors sat before in a blank lobby, colorful wallpaper of superimposed agricultural drawings now draws their attention. To make the wallpaper, Lewis individually scanned and colored these hand-drawn images and arranged them together to form a multi-colored collage of archival knowledge. 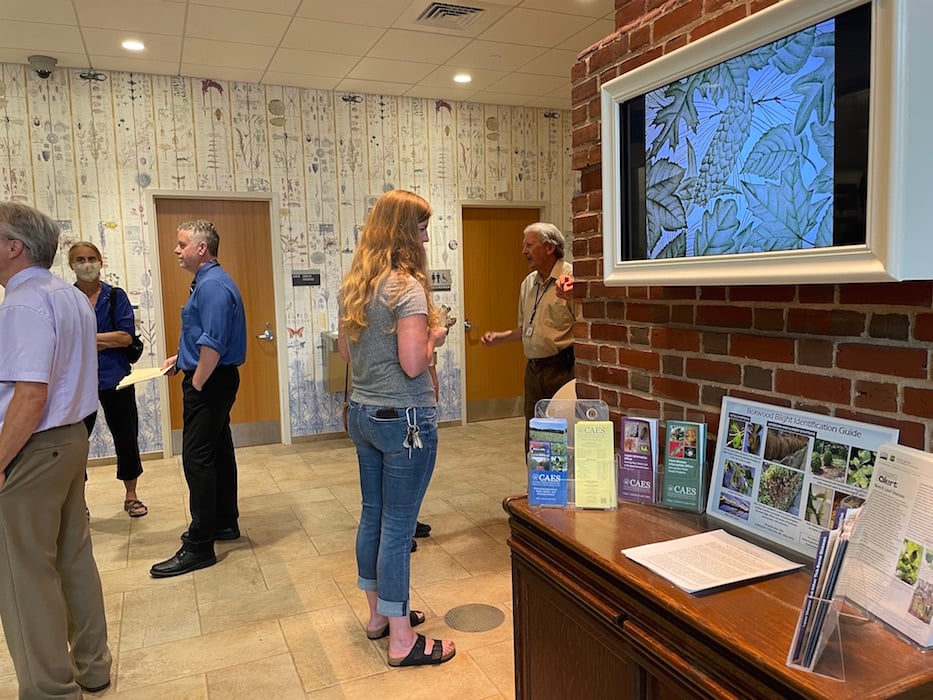 An incredibly detailed centipede labeled “Fig. 7” competes with the cells of a plant root tip. Faded blue images of corn line the bottom border of the wall, Lewis’ nod to the numerous corn-related experiments conducted at the station. Some of the drawings on the wall contain now-outdated information, a reflection of the station’s research process.

Through their art, Belanger and Lewis also hope to remind the station staff of the beauty of their work. “I hope that by turning these into works of art people will value them differently,” said Lewis. Large black and white photographs line the hallway leading to the labs, ten frames of plants on the left and ten frames of insects on the right.

Out of hundreds of negatives, Belanger carefully chose just these 20 to display together. Once tucked away in the library, each photograph now hangs proudly framed by white and shining silver, as if it were meant to be art all along. Some show a familiar scene—a tomato plant, a slug—made unfamiliar and beautiful. Others, like a close-up of conjoined apples, make viewers do a double take.

The art in the atrium, which incorporates Lewis’ wall coverings and Belanger’s framed photographs, is a favorite for both of them. Here, they highlight the interaction between humans and nature. A repeating pattern of temperature measurements from 1926 superimposed over a landscape of dead trees covers one wall of the atrium, rendering it the aged yellow of old graph paper. 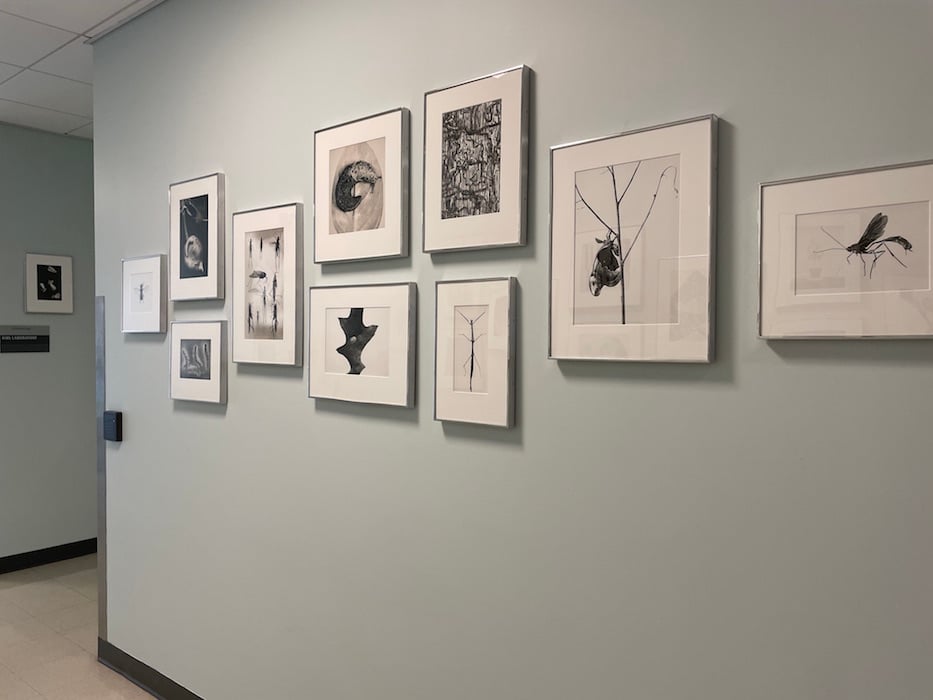 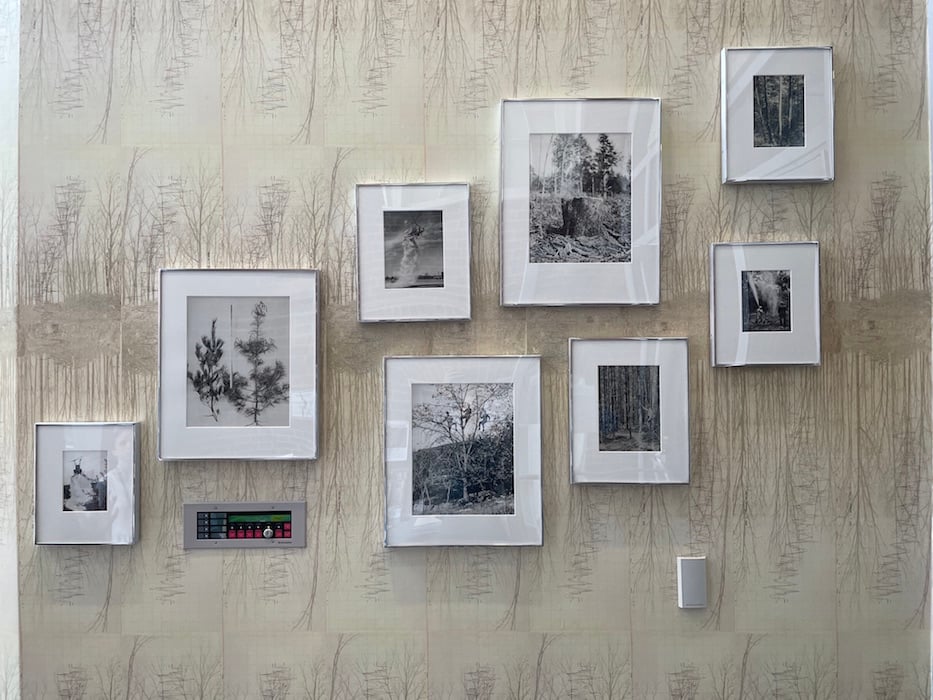 Photographs of helicopters spraying clouds over the forest, forest rangers in the field, and tree stumps cut by human hands stand out against the faded background in metal frames. Together, the wall coverings and prints urge the viewer to consider the effect of humans on the forest, and climate more generally.

Much of the artists’ work for this project consisted of going through the Osborne Library’s extensive collection and selecting the right pieces. Though only a few items made the cut to get enlarged and printed, Belanger and Lewis used a digital slideshow to showcase some of the other fascinating pieces that couldn’t be used elsewhere.

“These are all the bits of flotsam and jetsam that we fell in love with,” explained Lewis.  Some of the pieces contain interesting bits of text, like one author’s question, “How do sea plants compare with manure for fertilizer? I am especially interested in eelgrass.” Others celebrate the archival objects themselves, including intricate engraved book covers.

Back at the Osborne Library after the opening reception of Plants and Insects, Belanger and Lewis lingered over a metal box of glass slides. Each slide is labeled with a number and a scrawled phrase. Corn fluoride injury. Celery late/early blight. One artist took out a slide to hold it up to the light; the other riffed on an idea for a new project. They leaned into the slides, and for one moment the library fell silent as the artists found themselves captivated by the archives once more.

The Jenkins-Waggoner Laboratory is open Monday through Friday, 8:30 a.m. through 4:30 p.m. Find out more at its website.