Puppets Get Weird and Wonderful By Dark

Anatar Marmol-Gagné and Katayoun Amir-Aslani hopped down from the stage at Three Sheets to stroll through the audience, teasing patrons with shoulders draped in black robes. Making their way back, they faced away from the crowd, winking and shimmying with their robes in burlesque style. Then the pair dropped their robes and unveiled two puppets dressed in tiny sequined bikinis. They lurched around, trying to make four minuscule tassels spin.

The puppet burlesque was just one number in last Friday’s darkly entertaining puppet cabaret at Three Sheets New Haven, a variation on the bar’s monthly “Art In The Back, Music In The Front” series. In addition to Marmol-Gagné and Amir-Aslani, the show featured Western Massachusetts puppeteer Madison J. Cripps and Connecticut singer-songwriter Sarah LeMieux.

The performance space at Three Sheets was already standing room only when LeMieux took the stage, her mellow vocals supported by a soft, staccato guitar. Even though folks in the next room were chatting, the audience in front of her hung on every word of “De Temps en Temps,” a jazzy original she wrote about a “terrible boyfriend.”

“My French was okay and he had a bougie aspiration to date someone who spoke French. But he didn’t want to date me,” she said. “I wrote a bunch of sad, depressing songs, but after I got over it, I wanted to write more of a detached, ironic look at it.” 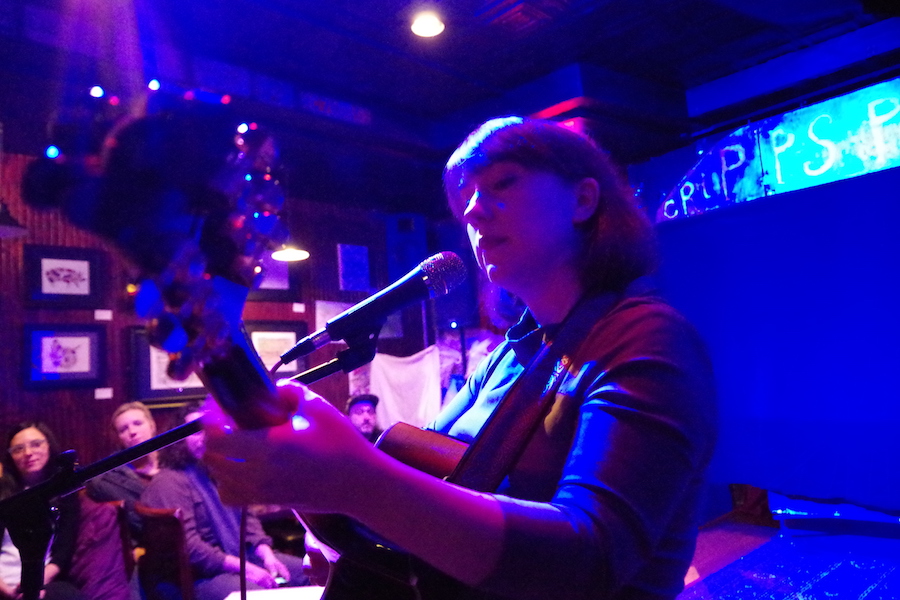 Finishing that song, LeMieux asked the audience if they’d rather hear a rumba that ends in a murder or a Hanukkah song with audience participation. The punchy group chose the former and was treated to an oddly macabre number—goth under the guise of French jazz.

“Ancient, quiet skies stayed blue while empires fell and rose…and the sky stayed baby blue overhead, y’all,” she sang, her voice smooth and melodic, with loose, flowing consonants and a fluttering vibrato. “Johnny loved his Julie truly, but she loved her Mickey’s bed. Johnny’s angry words earned him a goodbye kiss of lead, and the skies stayed blue overhead.”

Later, LeMieux did give the crowd that Hanukkah song too, preceding her rendition of “Ocho Kandelikas” with a quick lesson on the difference between Spanish and Ladino, a kind of Judeo-Spanish once spoken by Sephardic Jews, and still used in some services and music. Audience members joined in on the chorus as the tempo sped up from verse to verse.

After that, Marmol-Gagné took the stage as Madame Minerva, a soft, blank-faced puppet in a frilly, pink dress strapped around her neck. As Lady Lulu, Amir-Aslani recruited an audience member to help her hold a tight rope, coaching oohs and ahs from the rest of the crowd as Madame Minerva’s puppet danced down the cord.

“I’ve tamed a lion,” Madame Minerva announced, and Lady Lulu came on stage in a leopard-print hat and paws and the two launched into a comedic struggle to complete their tricks, earning boisterous laughter from the audience. The off-beat, slapstick performance was just right for the crowd, who knew how to let go and just go with the weirdness.

Quite a departure from her usual work, Marmol-Gagné said the performance was a was a letting go for her as well.

“I wanted to do something lighter,” she said in an interview after the show. “I’m always hiding behind a puppet. I’m a little shy and I can be quite introverted, so I wanted face those fears and take the performance head on.”

Before he took the stage, Madison J. Cripps led the audience in a count down, only to disrupt it himself by starting to count up and then blame the crowd for getting it wrong. Heckling the audience is one of Cripps’ fortes, and he’s just so wacky he got away with it.

He held one of his puppets aloft, the controller for the marionette looking like the solar panels on the MIR space station. The puppet crash-landed on the edge of Cripps’ platform, then attempted to push itself upright. The audience laughed at the struggle, but Cripps feigned defensiveness.

“Have you tried to do a push up lately? It’s hard!” he barked, which made the audience laugh harder.

“It should be easier on the moon!” someone shot back.

With his curling handlebar mustache and shiny shoes, Cripps’ performance personality may be brash and larger than life, but underneath all that, he says animating his puppets requires “soft focus,” centeredness, and a give and take with the audience.

As he got deeper into his performance, Cripps took a back seat and let his puppets speak for themselves in weird and wonderful ways.

There was Charlotte, a spindly puppet with long limbs like a spider. She had a bouffant hairdo, a red leotard, and red heels with toes that could point. She sounded like an old, pickled cabaret queen, toughened by time and soaked in gin, but still a grand dame. She danced with high kicks and arabesques and sang a bluesy song, shaking her head as she held out the notes.

After Charlotte, Bolts took the stage, dancing a jaunty tune to Cripps’ harmonica. A minute into his dance, Bolts landed stock still as his little puppet head kept wiggling.

When Bolts’ head wiggled its way right off his body and started dancing on its own, the audience freaked out, and then laughed at themselves for being having gotten scared.

Then one of Bolts’ arms and shoulders fell to the floor and was still for a moment before starting to dance on it’s own.

“Oh no,” someone called out as the arm pulled itself upright. “This is so weird!”

The crowd’s laughter was a a mixture of delight and dread as the other arm followed suit, and Bolts’ legs were left to ham it up to the jangly harmonica tune.

“Bolts comes on stage like any other puppet and then deconstructs the safety net of belief,” Cripps said after the show. “He’s like a sucker punch.”

Cripps says every audience reacts the same way during Bolt’s number, and it’s easy to see why. Lost in the moment, the audience thinks they’ve witness the puppet’s demise, so when Cripps animates the parts the same way he animated the whole, it feels unnatural.

But of course none of it was natural to begin with, and the audience winds up laughing at themselves for letting their senses run amok, thrilled by their brush with the uncanny. Cripps calls it “his favorite kind of puppetry.”

Cripps invited the audience to have a closer look at the puppets.

“It’s all about the controller,” he said, referring to the paddle like piece that the puppeteer holds in order to manipulate the strings. He explained that every controller is unique to the puppet and proportional to its size. Every movement the puppet will make has to be planned in advance and incorporated into the controller.

In other words, whatever the puppeteer wants the puppet to do, “you have to have a string for that,” Cripps said. 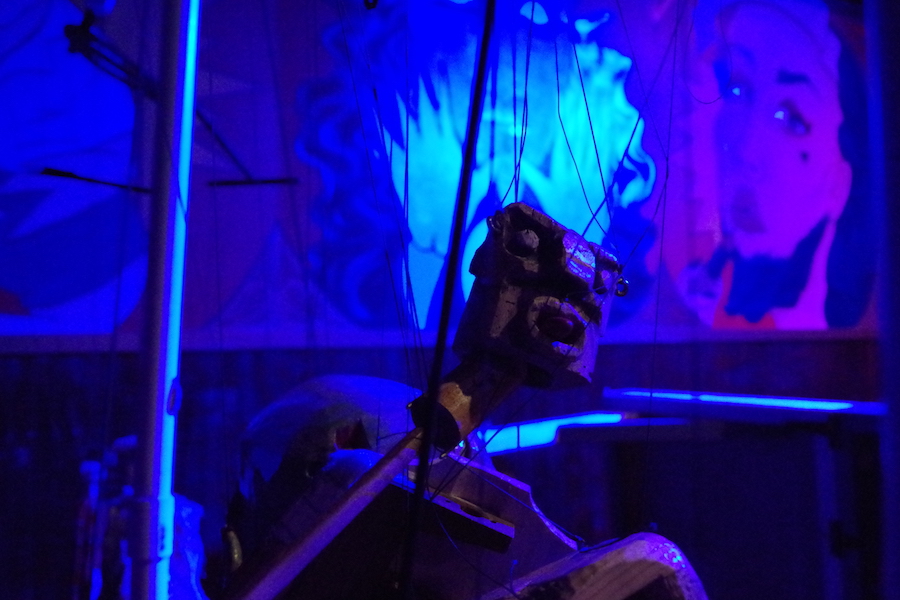 Cradling her favorite puppet Tarek in her lap, Marmol-Gagné explained that putting so much work into a puppet makes for close connections.

On top of those 100 hours, Marmol-Gagné took on extensive re-jointing work with the help of master puppeteer Phillip Huber, after which Tarek was able to lift his legs at the hip to do the splits.

“When I create a puppet, they kind of tell me who they are,” said Marmol-Gagné, and after the re-jointing she said Tarek was clamoring to be a dancer.

Marmol-Gagné said she logged over 60 hours of rehearsal to bring Tarek to life at the end of the cabaret, but she said she didn’t mind the work. “If I’m not creating, I’m not breathing,” she said.

Tarek took the stage draped in a maroon robe, and started by pacing back and forth to ominous music. Then the robe came off, revealing a pink tutu and sparkly leotard.

“Oh, I love this,” someone said as the performance morphed into a ballet, with Tarek hopping back and forth, kicking his legs like a can-can dancer and leaping high into the air.

Holding the strings, Marmol-Gagné was at home on the stage with her favorite puppet, giving the audience one last strange, dark, magical moment before they headed out into the night.