Rasheeda Speaks. Who Will Listen? 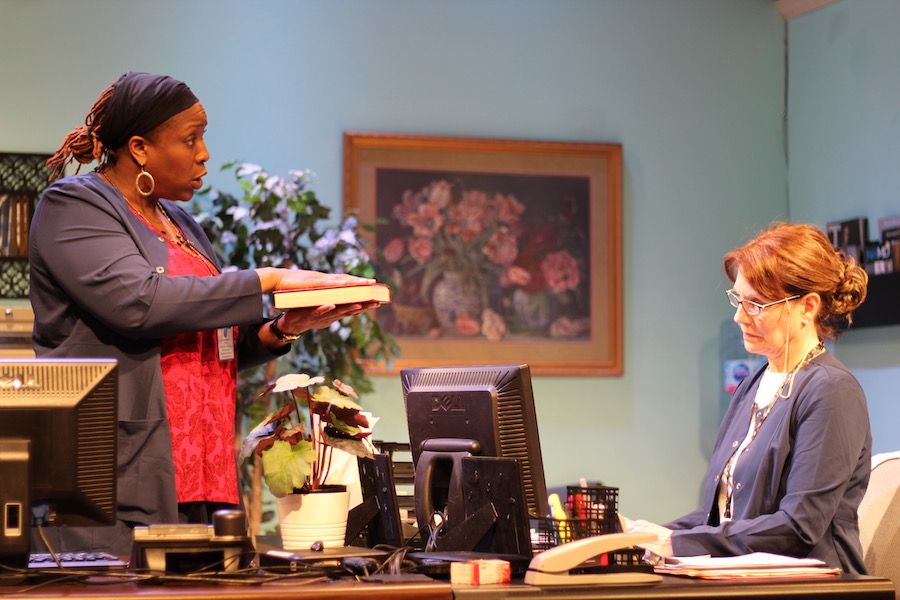 Maybe it was the patient who said that Black people are still mad about slavery, and flicked on a burner in Jaclyn’s chest. Or maybe it was Dr. Williams, who looked right through her on his way to the sticky buns. Or maybe it was a day ago, when Jaclyn was just watering the plants and a little water may or may not have gotten on the floor. But for a second morning in a row, she can’t seem to do anything right. A few feet away, Ileen continues to scribble performance notes on a little bone-white pad.

Directed by Elizabeth Nearing, Rasheeda Speaking unfolds in an unassuming doctor’s office in Chicago, as Dr. David Williams (Ethan Warner-Crane) and Ileen Van Meter (Susan Kulp) meet to discuss their morning business—which happens to be their colleague Jaclyn Spaulding (Gracy Brown). Six months into her job, Jaclyn’s professional missteps—which she’s not in the room to discuss—orbit around an apparent attitude problem and five-day sick leave. They’re vague and elusive, leading us to wonder if they exist at all. 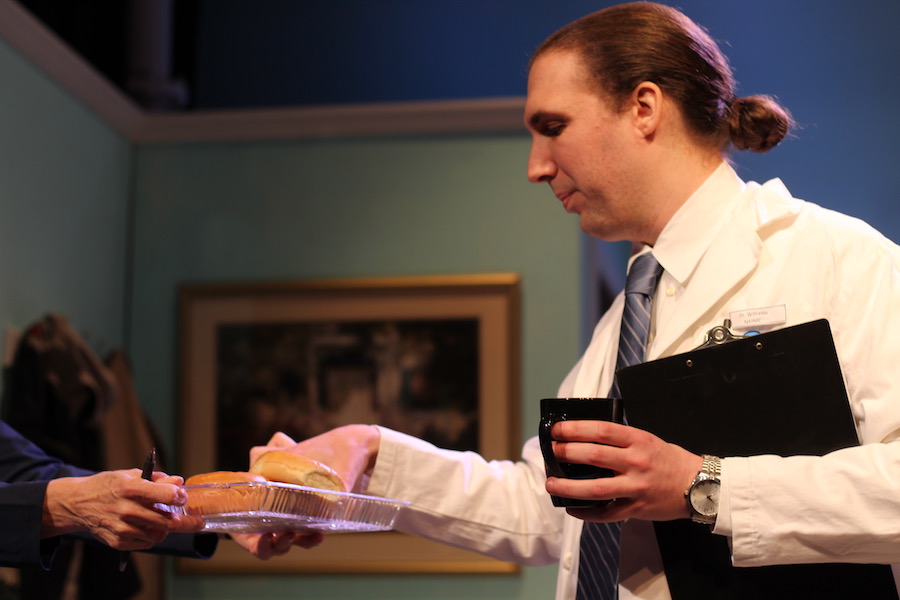 Williams maintains that he has made ”the mistake of hiring Jaclyn”—he just can’t explain what it is. Maybe it’s that she seems a little down in the dumps sometimes, he says. Or maybe it’s that she’s often “late,” which is a euphemism for just not early. Or that she doesn't warm to the nickname "Jackie," which just seems odd to him even though it's not her name. But they have to be careful if they report her, because they don’t want it to look bad to human resources. So Williams gives Ileen the tools of her trade: a thick white notepad and black pen, with which she can tattle on Jaclyn like a beady-eyed, pasty-faced, size double zero KGB agent.

As they gab inside the office, Jaclyn gets off the Michigan Avenue bus and heads into the building, waiting for the second hand to inch its way into 9 a.m. before walking in. She is right on time.

Johnson is not subtle in his turn of phrase: the two white folks want to find a way to get rid of the moody Black lady, because when you work in an office full of entirely white people, the overbearing unpleasantness of structural racism (which incidentally smells like lab toxins and fresh-brewed coffee) is both easy and possible to forget. 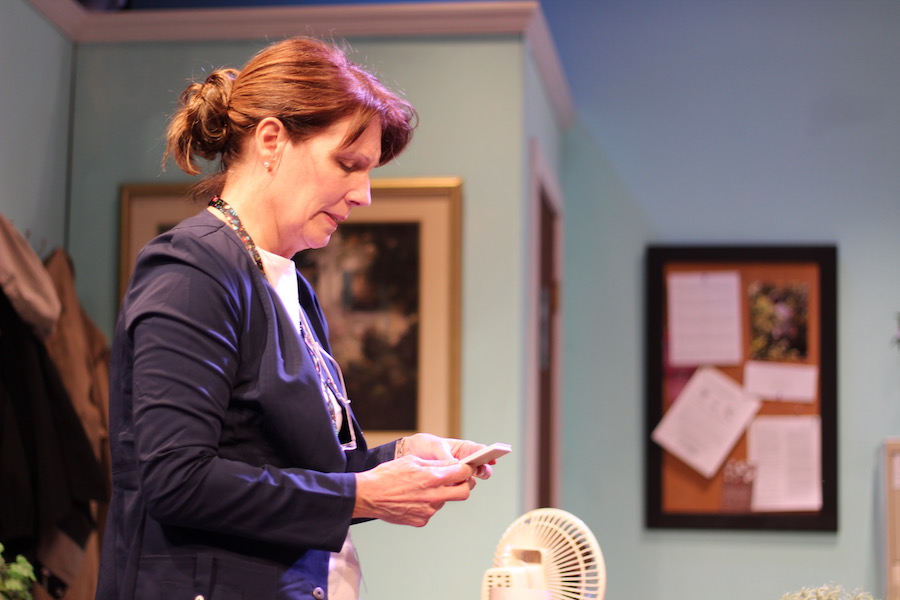 The trick is making it funny, right up until the point that it’s not. From that first interaction, Johnson builds a world that is part farce, part straight up truth-telling. At first, Ileen has Jaclyn in her trap—this middle-aged newbie thinks she’s in trouble, and walks a constant back and forth between being fully herself and fully apologetic. It’s as if her back-and-forth is more of a moral tug-of-war, and she’s not sure which Jaclyn she wants to bring to the office. But when she realizes she’s being played, she plays back—better, harder, faster, because she has been played by the world around her so many times already.

But if we are predisposed to like Jaclyn—and we are—she always doesn’t make it easy. She’s genuinely rude to colleagues and abrupt with patients, throwing a wrench in our plans. She upsets 82-year-old Rose Saunders (Debra Walsh), who is nervous about a tumor, over a procedural matter. She’s vocal about experiencing racism in the office, but has her own hangups with the Mexican family who lives downstairs from her. She switches materials in Ileen’s desk drawers, her psychological play delighting us far more than we know it should.

In this world, microaggressions aren’t just laugh lines—they’re returned with other microaggressions. If Jaclyn is aggressive, Ileen can be pale, pasty, puffy-faced. If she can laugh at this, can we too?

At some point, it stops being funny, or maybe the funny just starts being cruel. In one particularly telling scene, Jaclyn becomes the butt of a joke, the thought that she could be in love with Dr. Williams so funny to him that laughs roll and ring through the office. In another, she asks Ileen if her pleasantries have “passed” a sort of test, and it’s not clear if the women are even talking about the same thing. 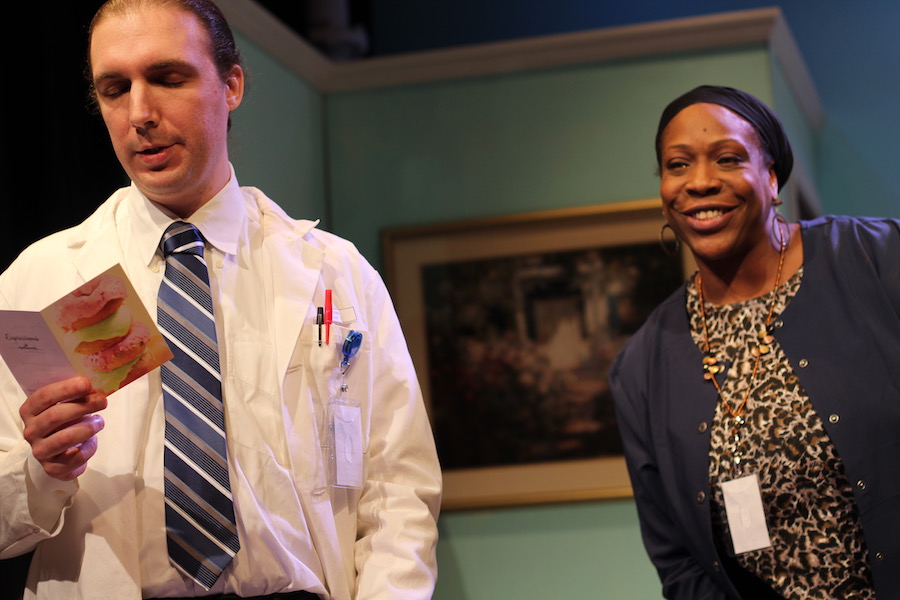 Johnson drops some verbal bombs: that people of color are bristly as “their way of protecting themselves from their own lack of self-esteem and power, a power they will probably never, never have;” that saintly Ileen has “tried to help you, and I’m not going to do it anymore.” It seems overblown, maybe, except that we’ve heard those lines somewhere before.

By the time Ileen proclaims “I just think we need to get along!”—it’s unfortunately more Kenny Chesney than Marvin Gaye—we’re there. The world she inhabits is so very different than the one Jaclyn must endure, from their modes of transit into work to the places they return to at night. She’s never had to understand why.

That is the brilliance of Rasheeda Speaking, doled out carefully from Nearing’s able hands. It’s approachable, but gets us uncomfortable in the right places. We laugh about the sheer amount of anti-racism work there is to do because the alternative is crying.

We all have an Ileen or a Jaclyn in our lives, or maybe several of both—that colleague who came in from Branford for your kid’s birthday party, and locked a gun in the glove compartment just in case they felt unsafe. That aunt who lives in Oak Park or Grosse Pointe or Creve Coeur, because Chicago, or Detroit, or St. Louis are not places she finds suitable to live for reasons she likes to dance around. 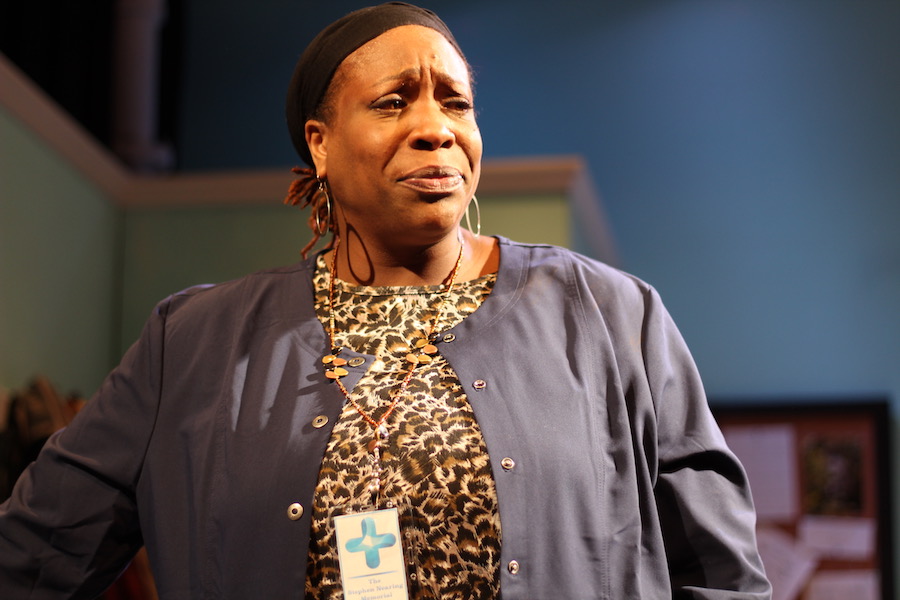 If there’s the attempt to shrug it away in the audience, Johnson doesn’t let it go so easily. As the play rounds its final bend, Jaclyn gives a monologue that makes clear we can beat around the word racism, but it will still be there, lurking by the xerox machine and the coat hooks, on the city bus and the in waiting room. If the n-word isn’t in a sentence, it doesn’t mean it isn’t there. The coffee pot breathes and gurgles nearby. In the background, Ileen makes her body small, as if shrinking into herself enough will make her invisible.

Brown’s performance is quietly mammoth, and heart-burstingly good. From the moment she walks onto the stage, it is clear there is a hurricane inside her: not one that she has made, but one those around her have stirred up, then directed straight toward land. Her statements, barbed and honeyed in the same breath, land with comedic timing—never the side-splitting kind that Office Space or Noises Off still conjure, but knowing, like we’re in on the joke and would prefer not to be anymore.

Warner-Crane gives Dr. Williams soft edges, revealing glimmers of sympathy and surprise that make him less villainous for a moment—and then reaffirm his status as a terrible human being. And Kulp makes a magnificent descent from anxious to paranoid, the audience leaning in as her polite, steadied facade crumbles and she learns to weaponize her fear. She’s terrifying—at least she was for this Midwestern white reporter—because her move from mild discomfort to all out racism isn’t unbelievable at all.