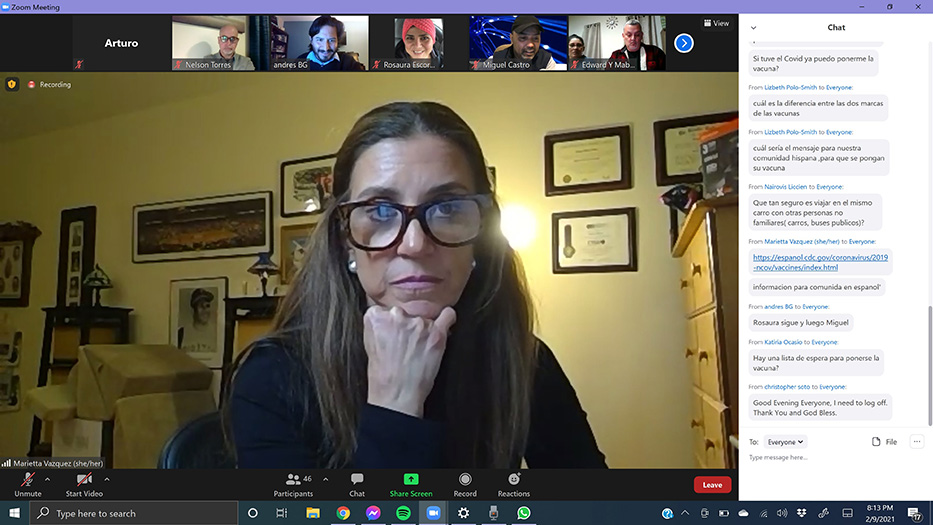 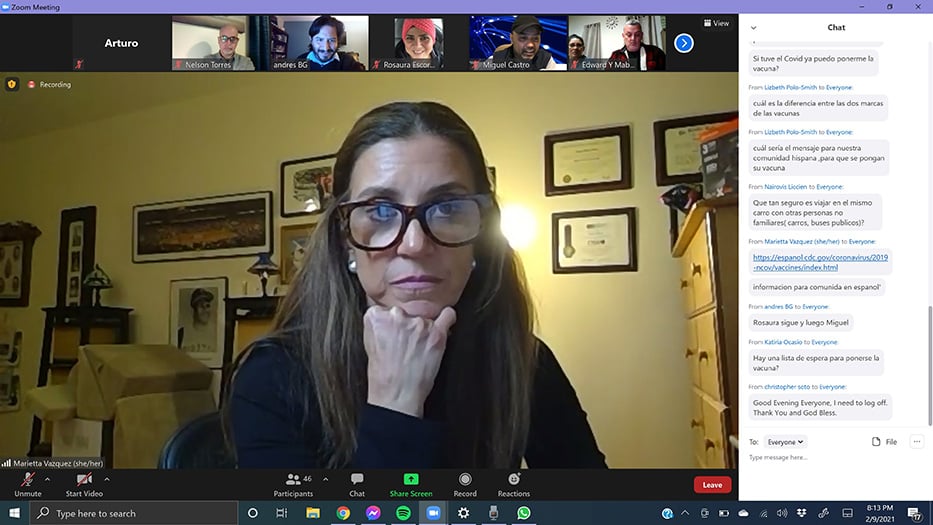 Dr. Marietta Vázquez answering questions from the panelists during a virtual town hall.

Should people who can get pregnant get the COVID-19 vaccine? Will my lupus treatment cancel out the vaccine? If I am immunocompromised does that mean I shouldn’t get the vaccine? What if I have diabetes?

Those were a few of the questions Dr. Marietta Vázquez fielded at a virtual town hall for religious and community leaders from across the state. Vazquez, a professor of pediatrics at Yale School of Medicine, has more than 20 years of experience working with vaccination efforts. Alongside her, Rev. Abraham Hernández, vice president of the National Hispanic Christian Leadership Conference and pastor of Second Star of David Christian Church in New Haven, discussed the best ways to correct misinformation within immigrant communities.

More than 50 religious and faith-based community leaders gathered via Zoom for the town hall, which was conducted entirely in Spanish. The event was organized by URU The Right to Be. Information in Spanish about vaccinations can be found here.

Hernández kicked off the discussion by asking the religious community leaders to be the vanguard and lead their communities in vaccination efforts and preventative care. Currently, eligible Black and Latinx state residents are getting the vaccine at about half the rate as eligible white residents.

“Who better than the church to be that agent of change that fountain of information which can help our community’s old and young,” he said. “[We] have to take these vaccines to the community ... colleges, churches, community centers, pharmacies to make them 100 percent accessible.”

He and Vázquez drew attention to the disproportionate number of deaths due to Covid-19 in Black and Latinx immigrant communities as an even more urgent reason to increase outreach efforts.  At one point, a participant asked if the higher rate of deaths was attributed to any genetic factor.

Vázquez said that the disproportionate mortality rate, especially in young Latinx communities, is due to unequal access to healthcare. Those same community members are also often essential workers.  She said that it stems from systemic racism.

“There is no genetic reason as to why Hispanics are dying more than anyone else,” she said. “It has to do with the reality that these people are essential workers who can’t stay home.”

Throughout the night, over a dozen attendants pressed Vázquez with questions about vaccine eligibility and their own experiences with Covid-19. Vázquez said that she wanted the town hall to be a space to correct misinformation shared through WhatsApp messages, gossip overheard at the supermarket and in line at the pharmacy, and any other source of misinformation.

A recurring theme throughout the night was the incorrect belief that people with pre-existing conditions, such as asthma or diabetes, should not be vaccinated.  According to Vázquez and the Centers for Disease Control and Prevention (CDC), people with diabetes and those with any lung condition especially should be vaccinated. 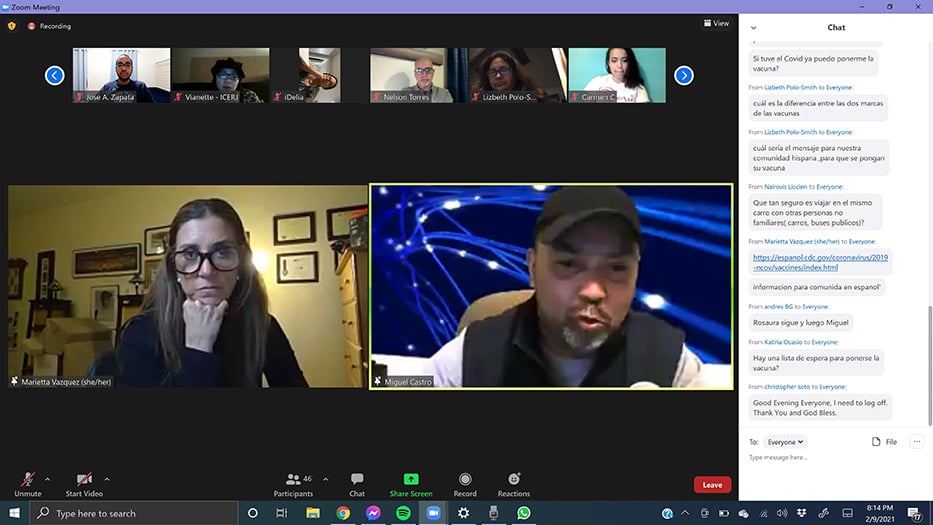 “A [small] portion of people are going to have an allergic reaction … there are many things that people are allergic to and we still sell them — mangos, peanuts, tylenol.”

People who can get pregnant should also receive the vaccine, said Vázquez. When they do, it may help protect the safety of two people who are in high-risk groups. She said that she understands the hesitation, because most of the Covid-19 trials had few or no pregnant participants.

She explained that the two commercially available vaccines by Pfizer and Moderna are different from vaccinations against influenza,which is known to cause severe complications in pregnant women. Those vaccines typically use an inactive virus to trigger an immune response. The two Covid-19 vaccines use messenger RNA (mRNA) instead of the virus itself.

Vázquez also spent time breaking down medical questions that community members had not yet received an answer to. One woman asked how the steroids uses for lupus treatment would interact with the vaccine. In her case, Vázquez said, high steroid treatments have been shown to render the vaccines inactive. She advised people with more complicated treatments to reach out to their healthcare providers to ask about their specific circumstances.

Others asked about the distribution of vaccines in undocumented immigrant communities The Biden administration announced last week that undocumented people should get coronavirus vaccines and federal authorities will not be conducting immigration enforcement operations at vaccine distribution sites or clinics.

The concern is a valid one, said Vázquez . She emphasized the need to provide as much correct information as possible for the sake of accurate tracking information in vaccine efforts.

“I want to know how many men men, how many children, how many people with diabetes, and so on have gotten the vaccine,” she said “If you have secondary effects we need to know where to find you.”

In the state of Connecticut, a state-issued ID is not required to get a vaccination and not a prerequisite for eligibility. No person will be turned away if they are unable to show an ID. However, people have to be able to prove residence in the state of Connecticut. Mostly recently a group of New York seniors were turned away from a CVS vaccine site for not living or working in the state.

As for the several new variants, Vázquez advised attendees to continue to get vaccinated and spread the message to fellow community members. She noted that  the current vaccines are still effective against some strains. Similar to the flu vaccine, researchers will adjust vaccines based on the most prominent variant based on smaller clinical trials.

“We have the resources and technology to make the necessary changes,” she said. “The good part of these mRNA vaccines is that we can more easily and quickly change it to target a variant.”