Sarah Golley And The Moxie Of “As We Crawl” 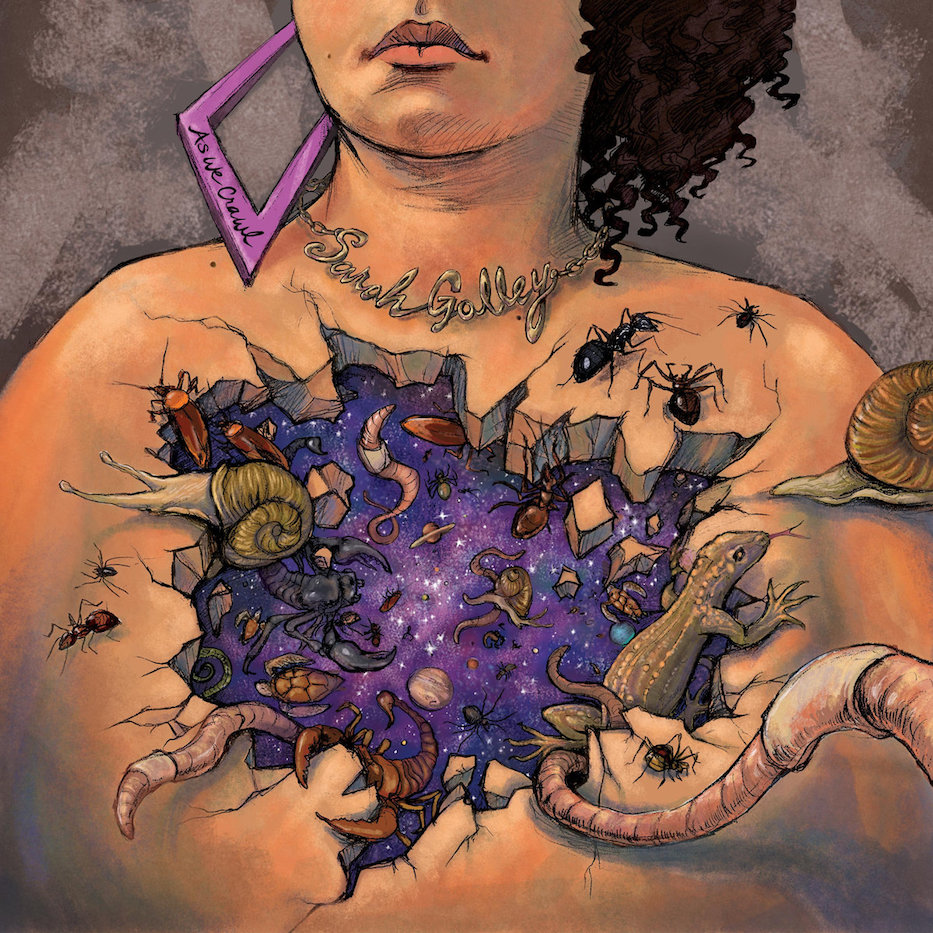 Musician Sarah Golley is walking out by the water on the edge of winter. She is dancing alone, singing right from the diaphragm. She is letting a black hole expand where her chest should be. Her body is breaking into full bloom. It sounds like a heartbeat meeting Fred Astaire in perfect time.

It’s all par for the course in Golley’s new As We Crawl, a sweeping soundscape that envelops its listener from a crisp beginning to its final note. Released last weekend, the album is now available on multiple platforms including Bandcamp, Spotify, Apple Music, and the artist’s website.

From the moment it begins—with a spoken word piece, and not a song—Golley has her listener by the ear. Her words are crisp and clean but they are also conversational, as if she hasn’t decided if she’s at a wine bar or a poetry slam championship. It doesn’t matter: she rolls forward with every word, and her listeners are right there in it with her.

In the track, her feet make their way to the edge of cold, damp sand and keep going. Hair whips in the wind. Blood rises to her cheeks. All the while, she pulls herself back into the poem and tilts toward alliteration. It’s a meditation full of verve and moxie and also metaphor, where each word has become precious to her and perhaps should be to us too.

“Sometimes I visit the beach in winter, just to remind myself that it’s still there,” she announces to no one in particular. “I walk out on the rocks/As if to dance across the water/As the frigid fresh salty air reddens my cheeks.”

There’s a kind of self-assuredness there that is steady and magical. Golley doesn’t make apologies, and she doesn’t ask permission (in fact, that trend comes back in several of her later lyrics). She doesn’t check with anyone to see if she’s too smug, too shrill, too extra. And thank god—she's a female musician who is taking all the room she and her beam-raising voice need.

Indeed, she sings every piece in a declarative first person that often implicates her listener, sometimes to the point of embarrassment or self-consciousness. She's a world builder: lyrics are poetic and inventive, particularly on the soaring "Like A Royal Reptile," as well as "On The Treadmill of Thought," and a stunning "To Our Graves." They are also Anne Sexton level confessional, bearing everything in tracks including "Into The Flames" and "Out."

It's a piece of work that is at times stunningly sad and honest. And at the same time, her lyrics don’t show a practiced, over-polished exactitude, but an artist who is still very much experimenting. It’s what listeners didn't know they needed until it reaches their ears.

By the second track, she has laid a lot of her musical cards on the table. To a measured, rolling entrance of strings and piano, she builds up a soundscape slowly, cello wrapping around keys before her voice cuts in. One moment, she is coming on soft, as if her voice crawled right out of a whisper and gotten its sea legs.

The next, it’s huge and hard at the edges, big enough to hold her whole self and then some. It’s Broadway’s Stephen Schwartz sharing an elevator with Regina Spektor, The Cranberries and Bang On A Can. And it’s great.

It’s also big enough to keep her listeners guessing. Some songs contain worlds, breaking from conventional structure for wildly changing tempos, looped and repeated phrases, and revelations that are as aurally rich as they are deeply personal. Others are cacophonous but controlled, fusing Golley’s background in musical theater, jazz, and choral music with a kind of sensibility that doesn’t rule out 1990s pop.

In “Over Time,” she swoops in with a barrage of staccato notes sung a cappella, then flips the song into a conventional cabaret kind of performance. It’s an earworm if there ever was one: under her voice, a tap dancer explodes into being. Synthy piano bobs up and down. She sails forward, speeding up as she sees fit. If the listener doesn’t stay with her, they’ll get left behind.

It’s a thread she picks up and inverts in “On The Treadmill of Thought,” a tour of musical samples spun into a lush, layered and operatic meditation. From the beginning—she sings scales that bloom into a singsong refrain of “absolutely no room/for fear in this heart”—it’s impossible not to be hooked. As voices spring from the woodwork (and they are all hers), one wants to hear all of them out. Her ability to marry blues, Broadway, and intersectional feminism isn’t just fun to listen to: it feels straight up necessary.

As they criss-cross Golley’s musical territory, songs jump between genres, bold and declarative always. Sometimes her voice is coasting over pumping, heartbeat-like percussion; others it is liquid gold, peeking through a beaded curtain of sound. It turns lyrics one might expect—a lover’s kiss, a trip to the beach, plain old existential ennui—into something dramatic, as if she wants to bring attention to the symphony that is this life.

She sings through rage, through trust and the lack of it, through questioning that she’s doing in real time. Her hesitation to accept the world as it is is contagious (“I am crawling/out a black hole,” she belts at one point, and it’s hard not to cheer for her). It comes to a head, perhaps, in the penultimate “To Our Graves,” where piano gives way to precise percussion, echoing vocals and an opening for jazz and pop, all set against a macabre backdrop.

“Hear me, open in heart/Broken, yet unafraid/Crawling to make art/Where the shatters remain,” she croons, her voice turning to gravel and then back to silk, sharp at the edges.

Then the tempo lifts. She soars onward. When she revisits the same words a minute and several lyrics) later, they’ve changed. This time, she knows exactly who and where she is.

It’s an inversion (followed by some witty spoken word) that defines a greater arc of the album: bold and brash, gnarly but beautiful. As she crawls through a black hole and exits the album, listeners are left with an artist who is rhythmic, irreverent, and rhapsodic, frightened by the world but also very ready to take it on. In return, all she asks for is a chance.

To find out more about Sarah Golley's music, visit her website or her page on Bandcamp.