Cole Porter Gets A COVID-19 Rewrite 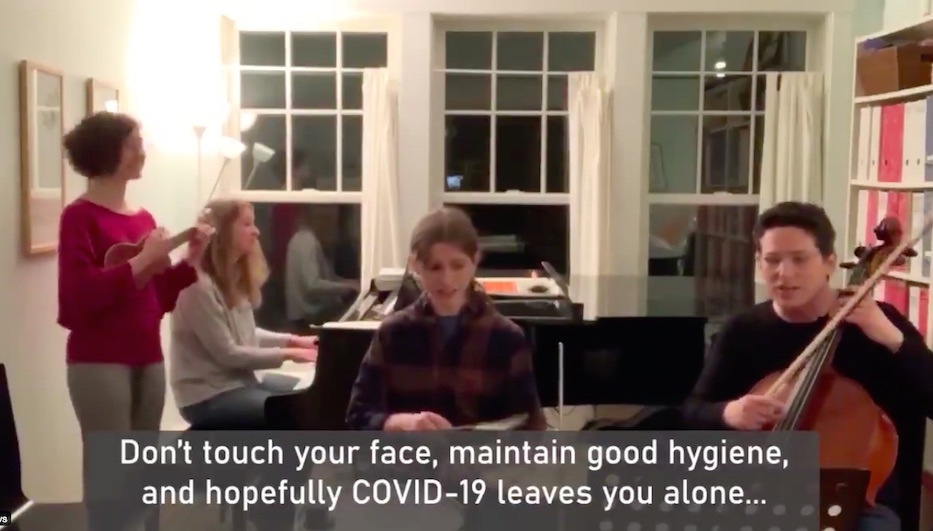 Connecticut hasn't officially ordered residents to shelter in place yet. But a professor from the Yale School of Music isn't planning to wait until it does.

Monday afternoon, Yale Professor Jeffrey Douma and his family issued that plea from their Hamden living room, as they reimagined Cole Porter's "Anything Goes" for a one-minute, mellifluous reminder to "Stay In Your Home." It comes among mounting COVID-19 cases in New Haven, including a 10-year-old child, and the first confirmed case in Hamden.

The video is perhaps the most jovial public health reminder that New Haven and Hamden have seen so far. In just over a minute, the family reminds listeners to wash their hands, stop touching their faces, and remain at home if they are able to. It's not tone deaf either: instruments in hand, they acknowledge that some people can't stay home because they are essential workers, and others still have to use public transit.

It also feels right on time. On Sunday, Connecticut Gov. Ned Lamont recorded and delivered a message telling the state's residents to "stay safe, stay home" via the CTAlert System, which sends direct notifications to Connecticut cell phones. Then on Monday, he ordered a ban on "non-essential" businesses, issuing 11 exemptions on everything from healthcare to takeout and delivery (read about all of them here).

He has not yet officially ordered residents to shelter in place, although both he and New Haven Mayor Justin Elicker have said they are considering it. Hamden Mayor Curt Leng has urged residents to stay home whenever possible.

The Yale School of Music has been posting concert recordings and a few short, virtual performances on its social media profiles. Check it out on Facebook and Twitter.