Storytellers Raise The Roof For Refugees 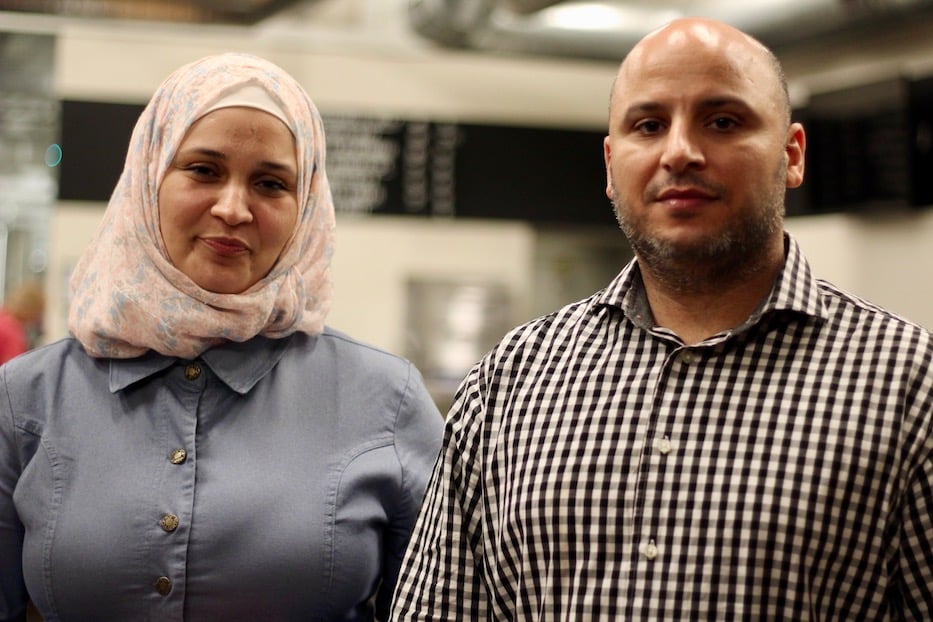 Before Lee Cruz was a household name in community organizing, he was a New Havener buying bread on the streets of León, Nicaragua.

Before Khadija Alahmad was a Hamden-based caterer, she was a mother in Aleppo, Syria, looking after her three young children.

Before Ashley Makar knew how to do community outreach with refugees, she was learning colloquial phrases in French and Arabic that would change the way she grieved forever.

Monday night, 10 storytellers unfolded similar revelations at “Living in a Foreign Language,” a happy hour and storytelling event at East Rock Brewing Company that doubled as a fundraiser for the Jewish Community Alliance for Refugee Resettlement or JCARR. Net proceeds exceeded $4,000 for the organization, which has been working to resettle refugee families in the greater New Haven area since its founding in 2015.

The event’s name was a nod to author and theater maker Michael Tucker, and his 2008 Living in a Foreign Language: A Memoir of Food, Wine, and Love in Italy. Over 100 attended. 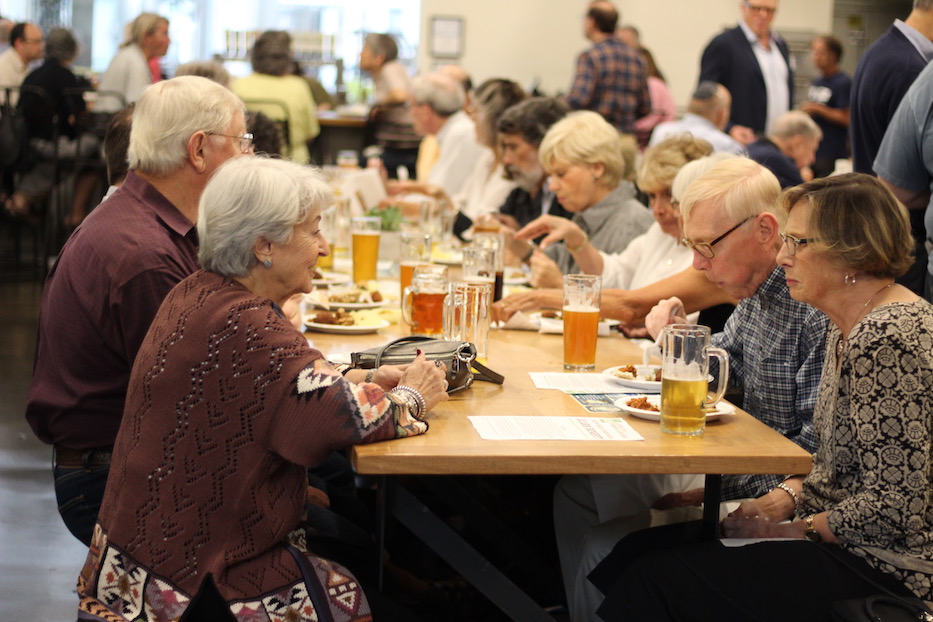 “Living in a foreign language, we felt we could do that because it’s universal,” said co-organizer and emcee Brian Dore, weaving in facts about the United States’ grueling vetting process, JCARR’s mission, and the resources it takes to support a refugee family over the course of the evening. “No matter who you are, where you come from, you always have difficulty communicating some part of your life.”

As storytellers conjured semesters abroad, twisted translations, and cultural missteps made entirely in good faith, many focused in on the unexpected, quiet and mighty realizations they have had while living in a foreign language abroad, and sometimes at home. A linguist by training, True Fezer Wolff walked the audience through the process of choosing the words that would live on her gravestone, a search that led to a meeting of English, Hebrew and German.

Veronika Grimm, who emigrated to the U.S. from Hungary in 1952, recalled her first major milestones in a new country—and a kindness of strangers that may have been hard to translate, but was not lost on her at all.

Khadija Alahmad, who also catered the event, recalled the fear and uncertainty of learning that she was going to leave her home in Aleppo with her husband and three children in 2014, a journey that took her first to Turkey, and then to the United States three years later.

In Syria, her husband had managed a small factory, making enough to support the family. When the two fled civil war for Istanbul, he found a job managing a small shop there. It was not home—but “the language, the culture, and the food were similar,” she recalled.

That sense of continuity ended in late January of 2017, as the family boarded a plane headed for the United States. Going step by step, Alahmad recalled learning that newly elected U.S. President Donald Trump was instituting a travel ban on immigrants and refugees from seven majority-Muslim countries. Syria was on that list.

“While we were in the plane, President Trump was destroying Syrian refugees’ dreams,” she said. “No more refugees. I felt that my family and I were not welcome to the United States.” 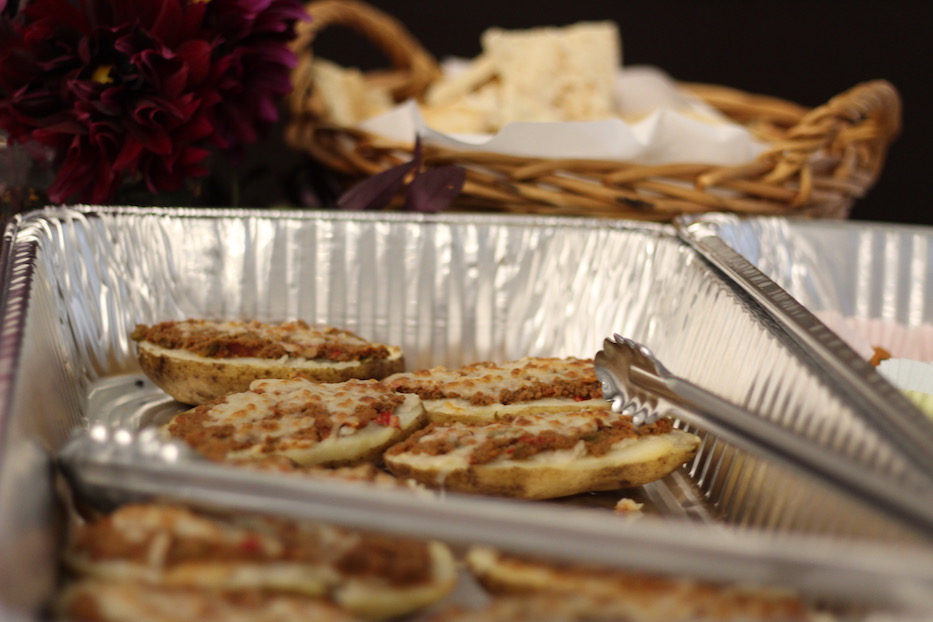 But the five of them pressed on. Despite her fears, the family made it through customs at the airport. They were welcomed by new volunteer faces from JCARR, who had secured a home for the family and helped to enroll the three children in Hamden’s school system.

The crew stayed on with the family, providing job assistance as the family tried to build a life in a place that didn’t feel at all like home. In a heart-wrenching detail, Alahmad recalled looking out the window of her new home, and “wishing that the current street would change into my old street in Syria.”

While the street did not shape-shift as she hoped, her life in the U.S. did. Her son, whose developmental disability had prevented him from attending school in Syria, was soon attending a school program for several hours each day. JCARR helped her husband find a job in a small factory. She practiced her English, growing her language skills beyond what she had learned in Syria. Then last July, she and her husband had a baby girl, and moved their family of six to a new apartment across Hamden.

Living in a foreign language has been hard, she said. Sometimes, so hard it is deeply exhausting. Her husband’s job, working in industry instead of managing it, has “changed his relationship to himself.” 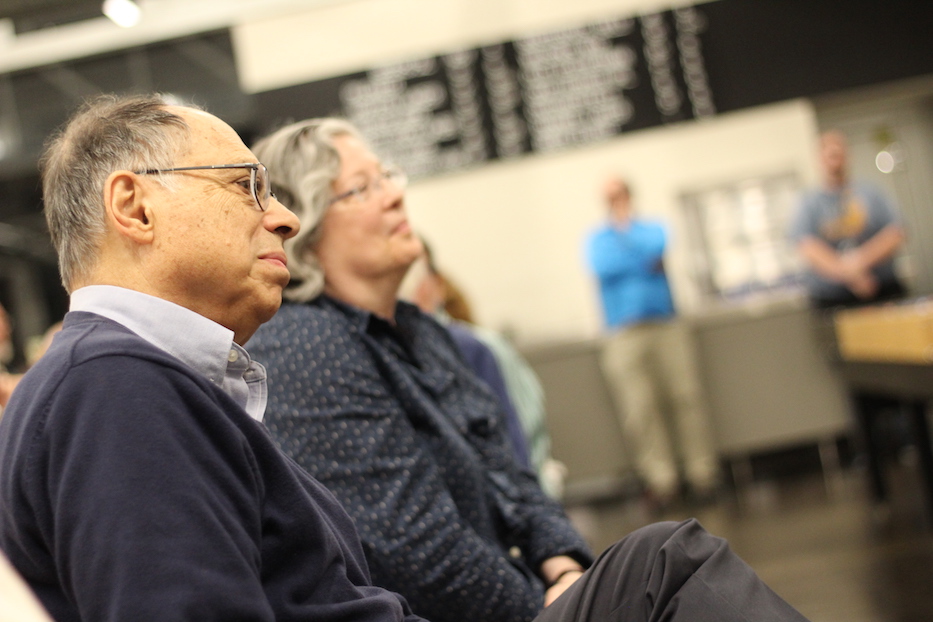 When the family moved last year, the kids were put into new schools and separated, a decision on which she fought the city’s school board until they reversed it. She advocated for more one-on one-care for her son. And then a few months ago, she began to get a catering business off the ground. She praised JCARR members for their help.

“At the beginning, when the phone would ring with the first orders, I was afraid to answer, worried that I would not understand the conversation,” she recalled. “Language can be very difficult to translate, and this can create problems.”

For instance, she recalled switching up the words “behind” and “on behalf of” on the phone, and confusing the person on the other end. Back at the brewing company, the audience laughed, several storytellers in the crowd adding in similar anecdotes later in the night.

“I want to say that immigration is a bittersweet experience,” she said. “It is harsh and difficult, but honestly, it has taught me many things I wouldn’t have learned if I was still in my country. Immigration is not an end, but the beginning of success when you finally find the courage in yourself.”

That navigation through a foreign language took a different form for Ashley Makar, who now works as outreach coordinator at Integrated Refugee and Immigrant Services (IRIS), but grew up in Alabama as the daughter of an Egyptian immigrant dad and mom “who went to x-ray school to get out of coal country.” 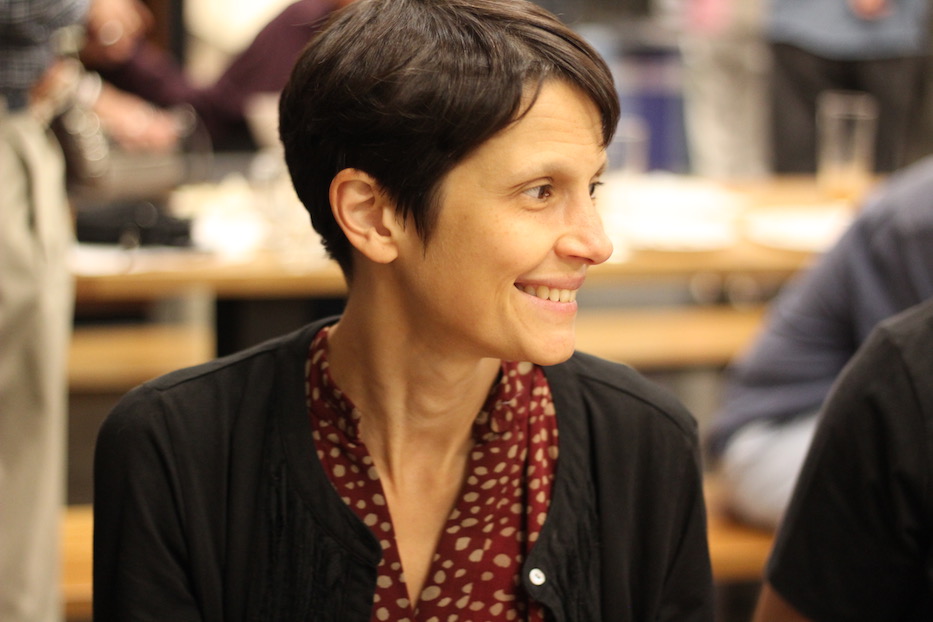 As a kid, Makar didn’t speak a lot of Arabic with her parents. But that changed each summer, when her uncle and aunt came to visit, and her home transformed into “little Egypt, Alabama,” an appellation that was met with laughs. During those months, Egyptian Molokheya bubbled on the stove, deep green and of little interest to the young Makar. Fish were cooked and served whole, with their eyes still beady in their heads.

But those summers were magical too: Makar’s aunt slipped her niece chocolate all the way from Alexandria, warning her in Arabic not to tell. She and Makar traded secrets in French, a language that they shared only with the family’s dog, Sandy. While she fed Makar chocolate, she would add to Sandy’s food “egg yolks, lamb bones, dobs of rice pudding.” When the dog died, it doubled as Makar’s first lesson in grief.

“I’ll always remember how she said goodbye,” Makar said. “Au revoir, chez le bon dieu. Until we meet again, at the home of the good lord.”

When she was in graduate school, Makar spent her summers in Egypt, taking Arabic classes and living with her aunt and uncle. While the classes taught her the language, it was her family that taught her “how to speak of the eternal,” with visits to the Coptic church where her father had grown up, and a reentry into those “old country superstitions” that her father and uncle may have shrugged off with time, but her aunt kelp alive. 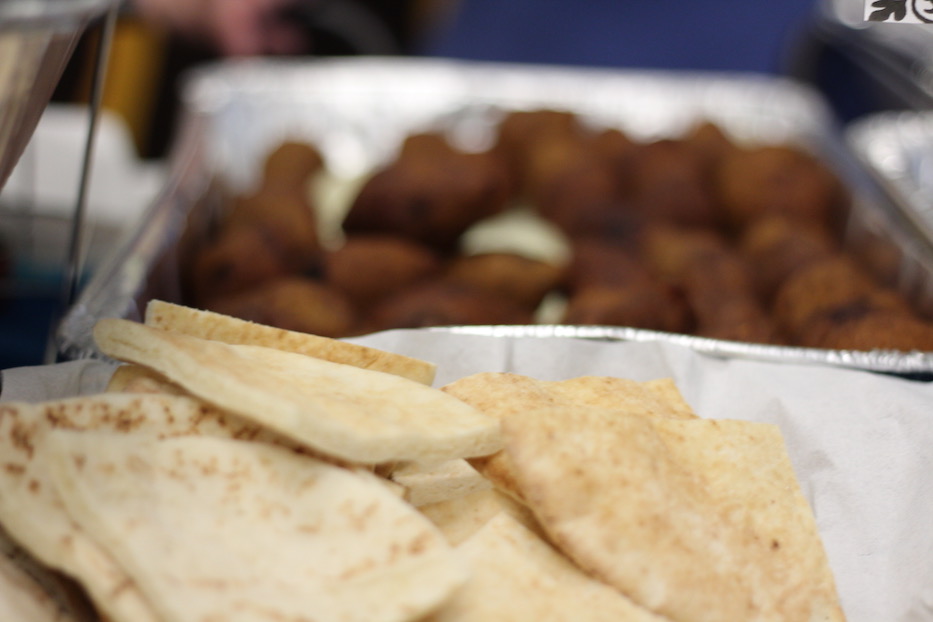 “Mashallah she would say to ward off the evil eye,” Makar recalled. “When we would leave our flip-flops with the souls facing up, she would rush to turn them over; ‘it’s rude to let the bottom of your shoe face god.’ When a car would break down, she would pray to St. Mina, the wonder worker. My dad would laugh, and call Triple A.”

But that worked two ways, she learned in a language that lived between Arabic, and something entirely divine. When Makar’s father went into kidney failure, her aunt fasted, sometimes for days. When cancer put her into in a coma, Makar watched her uncle—a physician—turn back to a spiritual realm.

“That’s when I started how to learn to grieve in French and Arabic, and the languages beyond speech,” she told the audience. She recalled singing her aunt the same French lullaby she had taught her as a child, believing that the sound of it might penetrate some layer of consciousness, and help her come back to herself.

When her aunt died, “free of all the machines that had kept her alive,” Makar already knew what phrase to use. Au revoir, chez le bon dieu—”the only way she taught me to say heaven.”

“Part of my heart is hollow since my dad, Elaine and Latif all died,” she said. “It is that hollow part that fills with light when I connect with refugees, knowing how much they’ve lost to be here. Grâce à dieu, I tell a Congolese dad, glad I have a way to say, ‘thank god there’s a bus that runs early enough to get you to your job.’”

Her Arabic gives her reasons to laugh with Iraqi, Syrian and Sudanese refugees, she added. She recalled explaining an upcoming dentist’s appointment to a refugee as “an appointment with the doctor because of teeth,” a rough but workable translation.

“Speaking my broken Arabic and rusty French with refugees feels like singing an awkward song that brings me back to half my home,” she said. 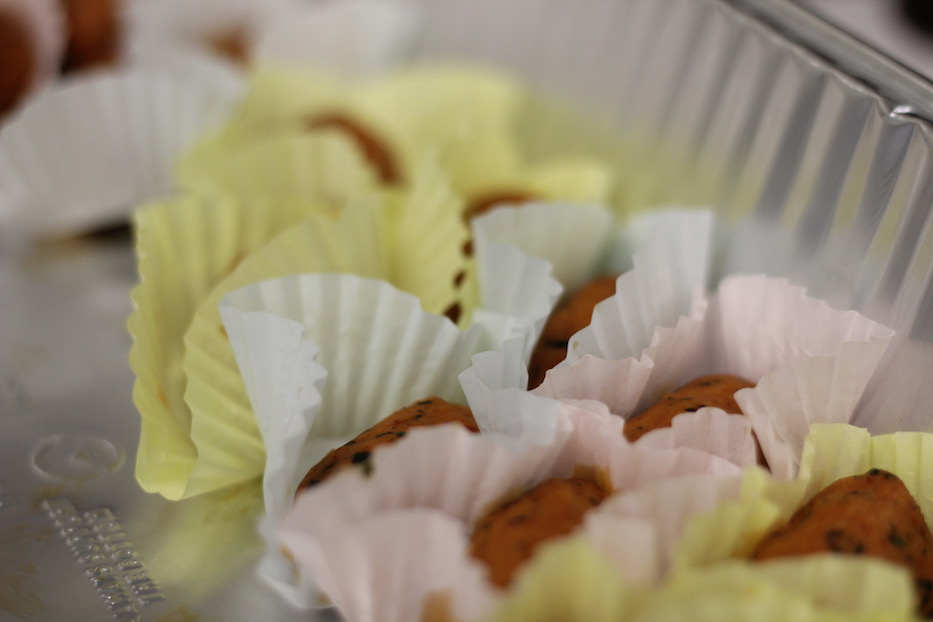 Cruz, closing out the evening, brought the audience back several years to León, Nicaragua, where he was living as part of the New Haven-León Sister Cities Project. Early each morning, he explained, he would head to a bakery for his daily share of bread, and then onto another shop for his daily share of milk.

“This is what one does every day with one’s neighbors, in preparation for making breakfast,” he said. “We wait our turn to buy the equivalent of two pennies worth of bread.”

But one morning was different. As Cruz walked toward the house from which he usually picked up bread, he saw a crowd instead of a line. As he grew closer, he could hear her make an announcement in Spanish “for probably the dozenth time that morning”: that she was sorry, but her daughter had forgotten to put salt in the bread, and it had to flavor. She could not sell it.

In the crowd, Cruz could hear some grumbling and confusion. He watched as a few neighbors walked away, heading to other bread bakers in the neighborhood. But others didn’t move. He could hear them talking amongst themselves. Then, a voice broke through the noise.

“And he says, ‘dame dos centavos de pan,’” he recalled, starting to cry even as he spoke. “Give me two cents of bread.’”

“I realized what was happening, was the community had decided that they were not gonna let her family suffer the consequences of the accident,” he said. “They were gonna come together and make sure that this woman had, and her family had, enough money for that day.”

Cruz bought his two cents worth of bread. It was tasteless when he ate it. He didn’t care.

“And as I was walking back, the only thing I could think was, ‘this is what community looks like,’” he said. “We need bread. Every day. We need food. We need sustenance. But community is made of a lot more than just bread.”

People who still want to donate can visit: https://jewishnewhaven.org/refugee-resettlement