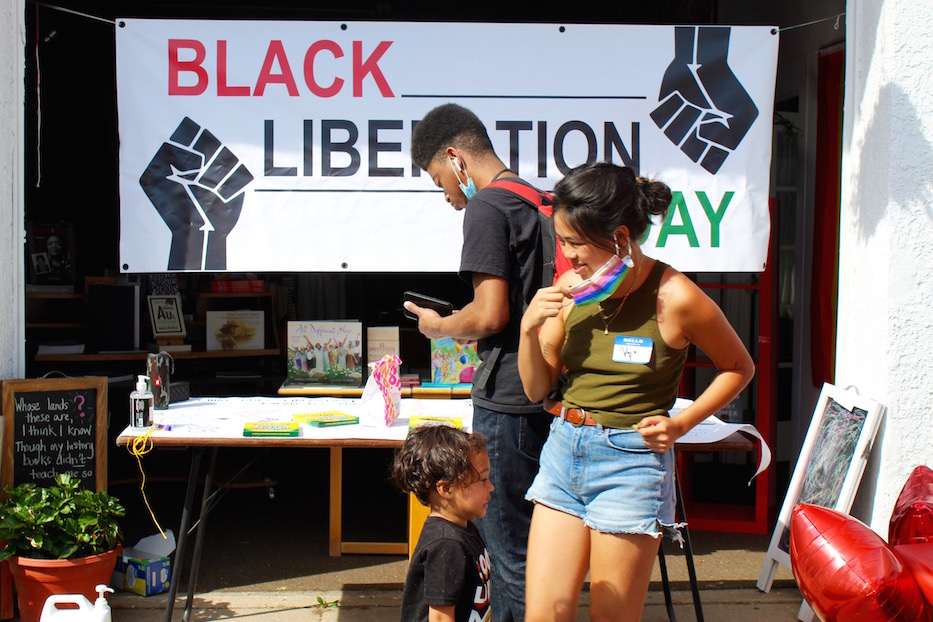 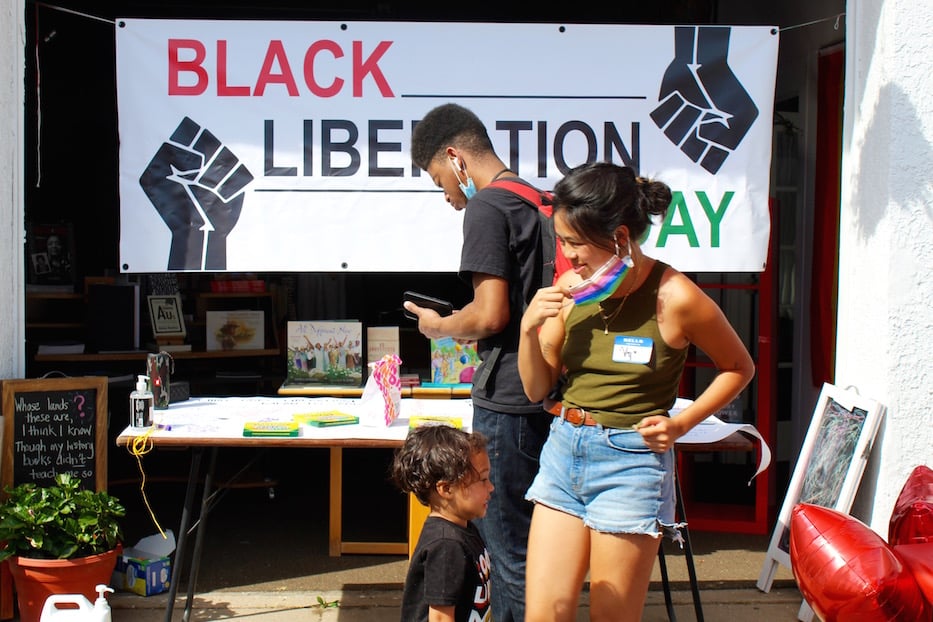 Beside People Get Ready Books, the parking lot had come to life. Three neat rows of painted, pint-sized terra cotta pots sat drying in the sun. Music blasted over picnic tables as young artists Gabriela and Magdalena Diaz inspected their work. A banner that read "Black Liberation Day" flapped in the wind.

Nearby, Isaac Yearwood and Angel Gabriel Coronel hopped methodically through a new hopscotch game that had appeared in the parking lot. When Yearwood completed a perfect routine, he raised his arms joyously in the air. Then the two reset, and started again.

Friday, members of Students for Educational Justice (SEJ) gathered outside of the Whalley Avenue bookspace to celebrate Juneteenth after over a year of remote school and meetings held largely on Zoom. The event doubled as a chance for the group to talk about its Students over SRO's (S.O.S.) Campaign, which seeks to remove cops from schools.

"We're here to celebrate in the spirit of liberation," said Executive Director Rashanda McCollum. "We're expressing ourselves through song, through art, just enjoying each other. We still don't have all the wins that we've been fighting for, but we have some of them." 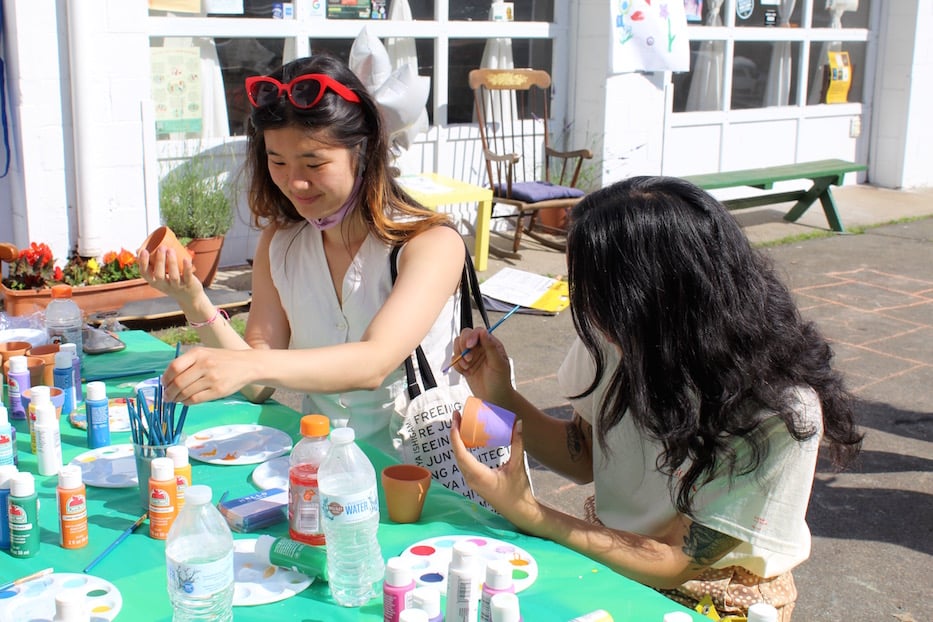 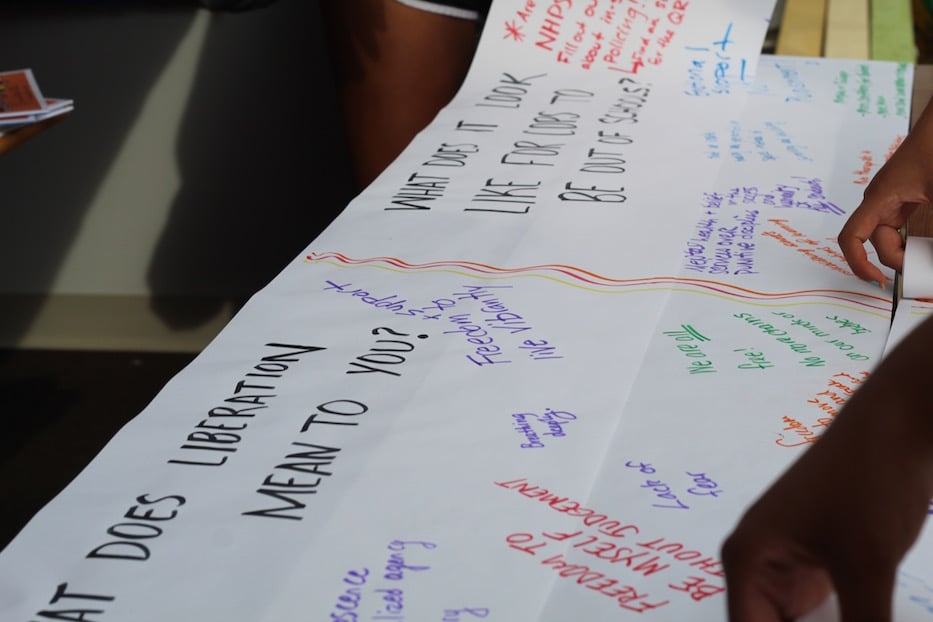 Juneteenth commemorates the emancipation of enslaved Black people in Galveston, Tex. on June 19, 1865. The date, which fell two and a half years after the Emancipation Proclamation was signed, marked the end of chattel slavery in the United States. It did not mark the end of economic disenfranchisement of Black Americans, which still continues today. Last year, New Haven announced that it would recognize June 19 as a city holiday. Last week, the date was signed into law as the 11th federal holiday.

This Juneteenth feels different, McCollum added. A year ago, SEJ was in the city's streets, holding a Juneteenth rally and teach-in that travelled from the New Haven Green to East Rock Park. This year, it leaned into a quieter kind of community building, where kids and teens alike left with paint-splattered hands and knees smudged with pink and yellow sidewalk chalk. Over a few hours, sprawling designs and intricate hopscotch games appeared across the asphalt.

At one table, rising New Haven Academy seniors Kaatje Welsh and Tamara Parks helped out some of the afternoon's youngest painters on a small pot project. Five-year-old Gabriela Diaz regaled the table with conversation, praising the bookstore dog Sugar so effusively that big smiles appeared on every face at the table. Every so often, Gabriela raised her paint-covered hands to the group, in case anyone needed proof that she was working. They glowed a robin's egg blue in the sunlight. 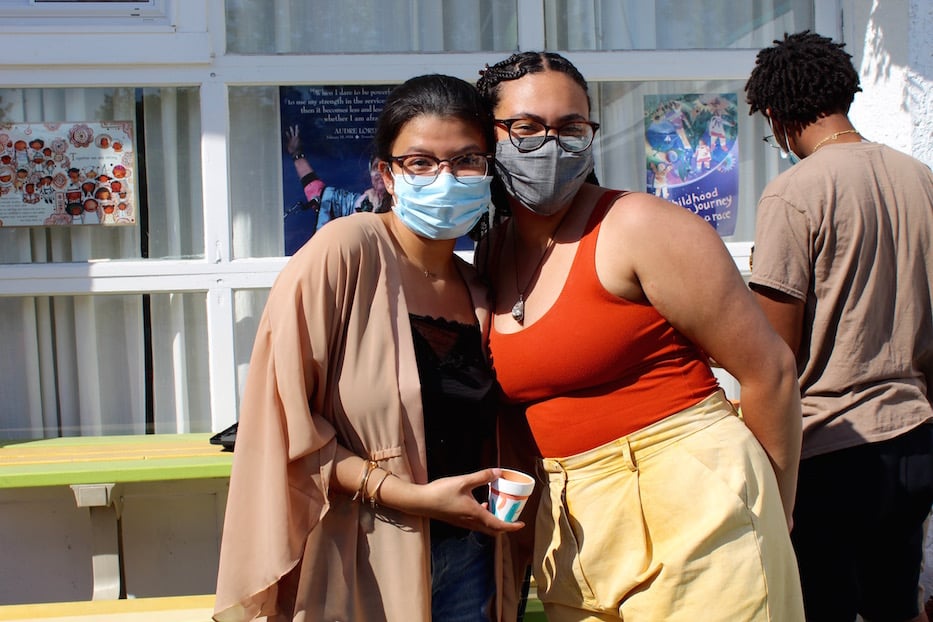 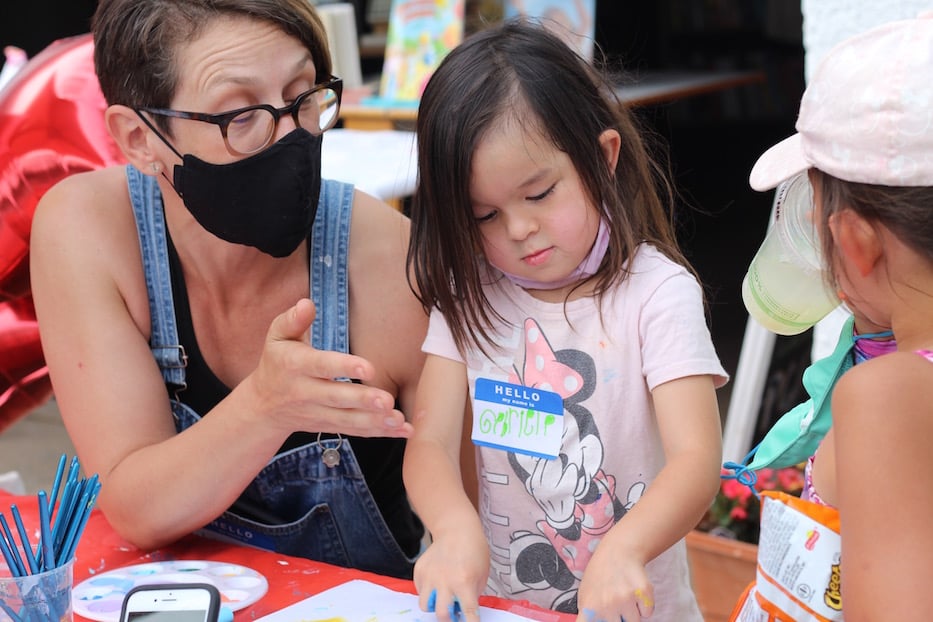 Parks, who joined the group in March, said that she sees the pots as a place to plant the seeds of abolition (by the end of the afternoon, at least one had become home to the bookstore’s small pet rock, a smiley faced stone named Pebble). As a member of SEJ's "New Haven Public Schools (NHPS) Research Team," she has been working on a survey that asks NHPS students to give their thoughts on school resource officers, which are still present in some of the city's schools after a contentious vote at the Board of Education earlier this year.

She called Juneteenth a time of celebration and resilience.

"But not like, celebrating the white people freeing enslaved people," she said. "Celebrating Black and Brown people getting through that and getting this far."

Welsh, who has also been working on the survey, added that she sees the holiday as a chance to gather after a very long year. To her left, a table of SEJ members walked kids through painting and compared brushstrokes and patterns. Volunteers buzzed by with name tags and markers in every color of the rainbow.

To her right, students tore into bags of bright orange Cheetos, inspected Subway sandwiches and traded notes on the school year. A few stopped to chat with Lauren Anderson, who runs People Get Ready with Delores Williams. Others signed a long scroll that read What Does Liberation Mean To You? and What Does It Look Like For Cops To Be Out Of Our Schools?  Suggestions from “A lack of fear” to “We are all free!” bloomed across the paper.

"We still want them [school resource officers] completely out of schools," Welsh said. "Today, I feel, is about bringing people together, joy, and celebration. I feel like this is helping us remember all of that." 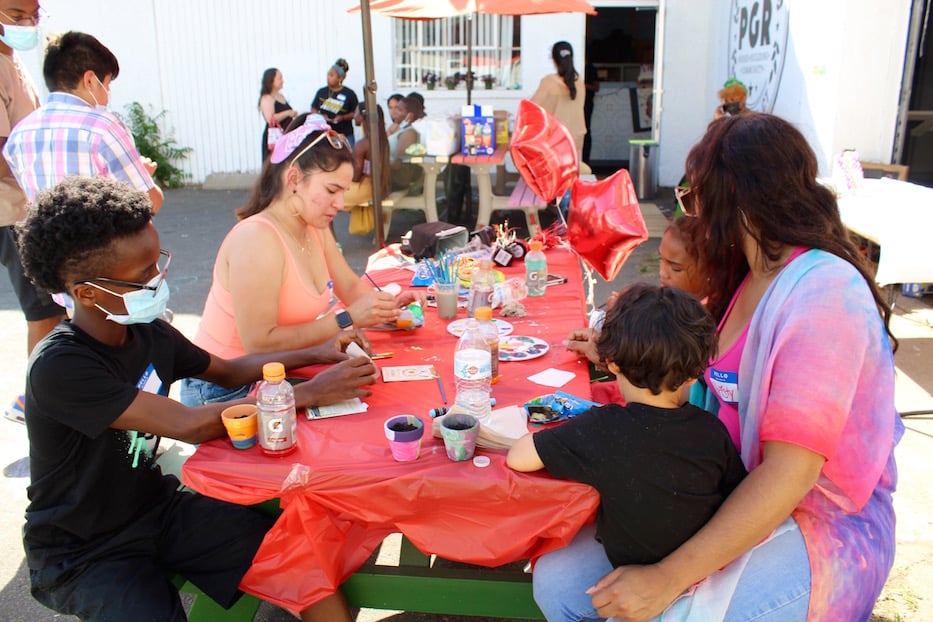 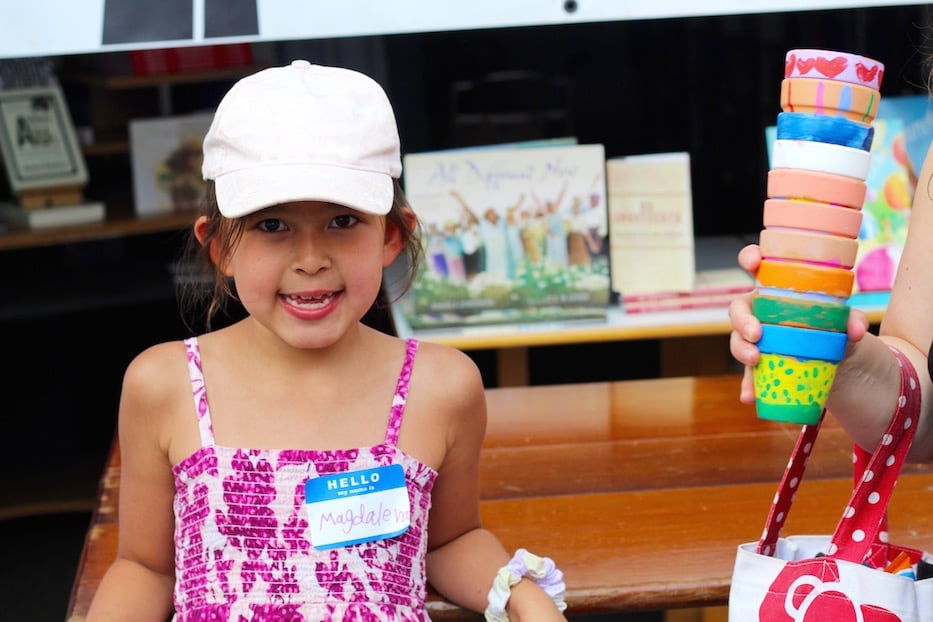 Several families turned out for the event. Magdalena Diaz, who is eight, chatted about the weight of Juneteenth as she inspected her handiwork on a pot with thick, vibrant green and purple stripes.

“It makes me feel happy, because once those people were enslaved,” she said. “They have a right to be free just like every other person in this world. All of us are human.”

At a picnic table in the shade, friends Christine Senu and Leslie Brown painted with Brown's kids Bryan, Lesmarie and Dominic. A community health organizer with Clifford Beers Clinic, Brown said she was especially grateful for a family-friendly event that included the history of Juneteenth. As a mom and a community health worker, she sees the S.O.S. campaign as something she can get behind.

"This was exceptional," she said. "The children in this community deserve events like this."

"The cause that they're doing, getting cops out of schools, is amazing," Senu chimed in, bouncing Dominic on her knee and ruffling his hair. "Imagine the ripple effect that this will have."

A few feet away, Yearwood and Coronel took a break from hopscotch to hydrate. A rising senior in African-American Studies and Education at Yale, Yearwood is a member of Black Students for Disarmament at Yale and an intern at People Get Ready for the summer. Coronel, who just finished fourth grade at Nathan Hale, had become his new best friend by the end of the afternoon. The two made the most of an impromptu hopscotch court, bouncing from foot to foot as they cheered each other on.

"It's celebratory of course, but it's also kind of somber," Yearwood said before heading back for another round of hopscotch. "When people got the news, what went through their minds?"

"I think it's a good day," Coronel said. "It makes me feel nice inside and happy that there were not slaves anymore." 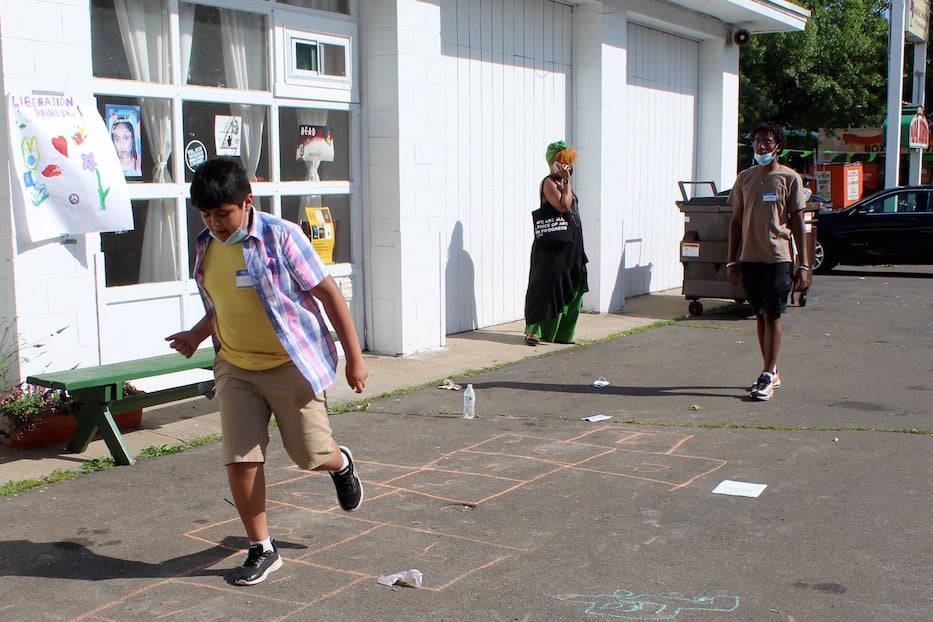 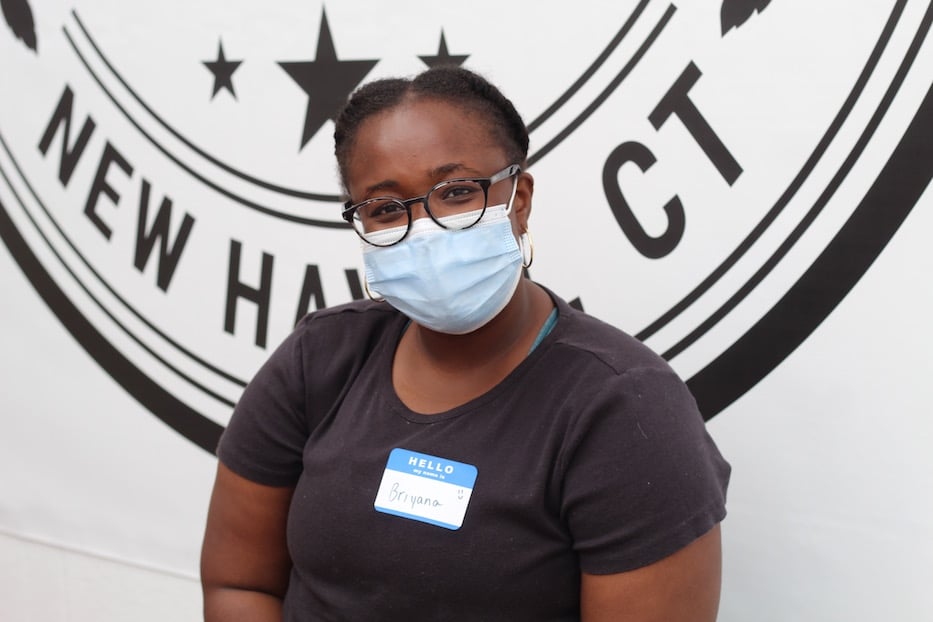 Sitting on a parking curb, Briyana Mondesir savored the moment. After a junior year of remote classes at Washington and Lee University, she said she was ready to be back with people, instead of sitting in front of a screen. She pressed her face up to the sun and took a long, deep pause.

After her senior year, the Spanish and Environmental Justice major wants to go into public health. Friday, she took a beat to relax. Snippets of conversation rose and fell around her.

"I feel like after this year we've had, so much has been gained," she said. "It's nice just to have this place to hang out, to just exist together. For me, now, Juneteenth is a celebration. I remember reading when the enslaved people in Texas were told, there was jubilation. I would love to tap into that jubilation."

To find out more about Students for Educational Justice, visit the group's website here. If you are an NHPS student, take the S.O.S. survey here.