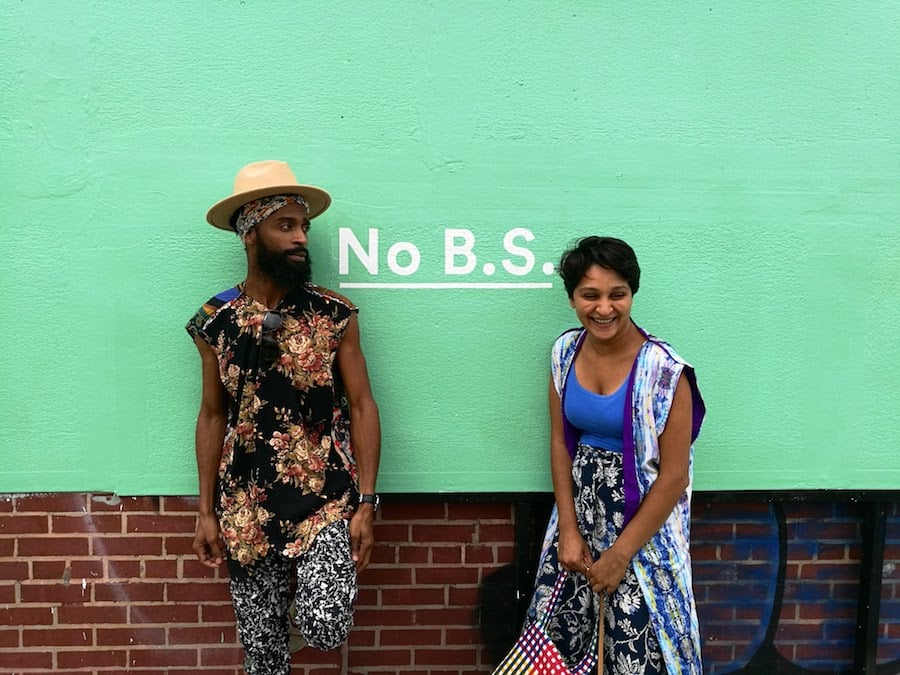 A printmaker leans carefully over her work in India, scrutinizing monotypes and woodcuts, bolts and bolts of unused fabric. Back in New Haven, a fashion designer works late into the night, drawing and redrawing designs for a fall jacket. The two email each other in the wee hours of the morning, trading ideas across a nine and a half hour divide.

By the time the piece is done, how does her work end up on his finished coat? And how are they sure it’ll look good?

That’s the question artists Meghan Shah and Tea Montgomery had two years ago, as they sat down for coffee and introduced their work to each other. Shah is the printmaker and painter behind Studio Strata, an artistic undertaking that had straddled states, oceans and continents. Tea Montgomery is the founder and artist behind Threads By Tea, a one-man company that designs, sews and sells wearable art.

Now, the two are  working on a collaboration that gets her designs onto artist-printed fabric, and that fabric into his garments and onto the bodies of New Haveners. In a way that they never imagined, it spans borders—from the Elm City to Pune, India, where she is living after ten years living close to her native Branford, and teaching in Fair Haven. 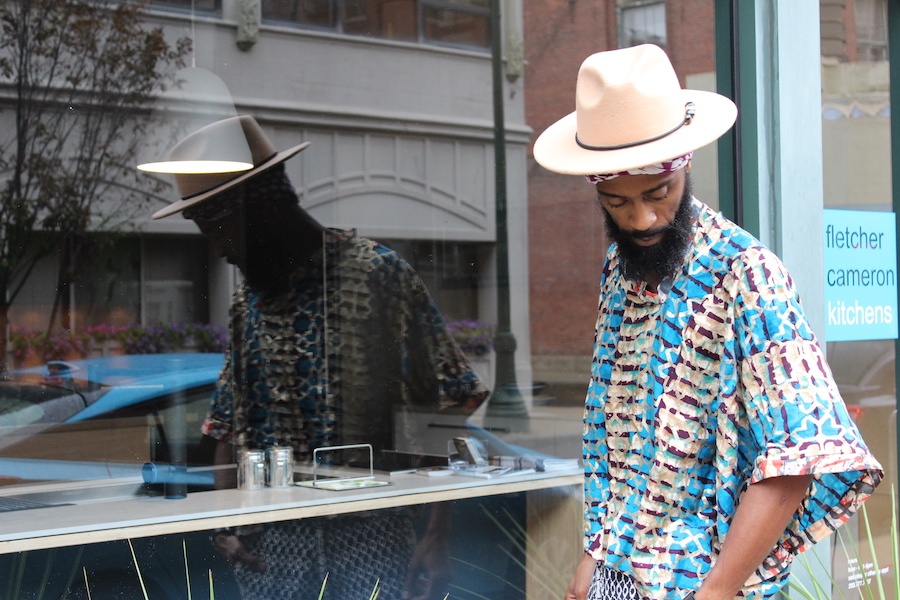 Then on Shah’s last residency in India, Santiago came with her, buying several bright, vividly pattered fabrics to bring home to Montgomery. When they returned, he promised to set up a time for the two to meet in person.

When she returned to New Haven for the academic year, Santiago set up a meeting at Koffee? on Audubon, the four of them unfolding the stories of their creative careers over coffee. By then, Shah recalled, being back in the U.S. wasn't sitting well with Santiago. Just a few months later, he and Benbow bought one-way plane tickets to Thailand and left.

But Shah wanted to know more about Threads By Tea, which was still in its fledgling stages. She invited Montgomery over for dinner last summer to continue the conversation. At the time, Montgomery was working for Jordan’s Furniture, and making his own clothes out of necessity. As Shah served up their meal—Thai curry with Montgomery’s first taste of tofu—he told her about the fledgling pieces he’d been making, teaching himself to sew until the clothes took shape. He explained the project’s roots—was bored by work clothes, and not many stores carried clothes that fit his tall, slight frame the way he wanted. 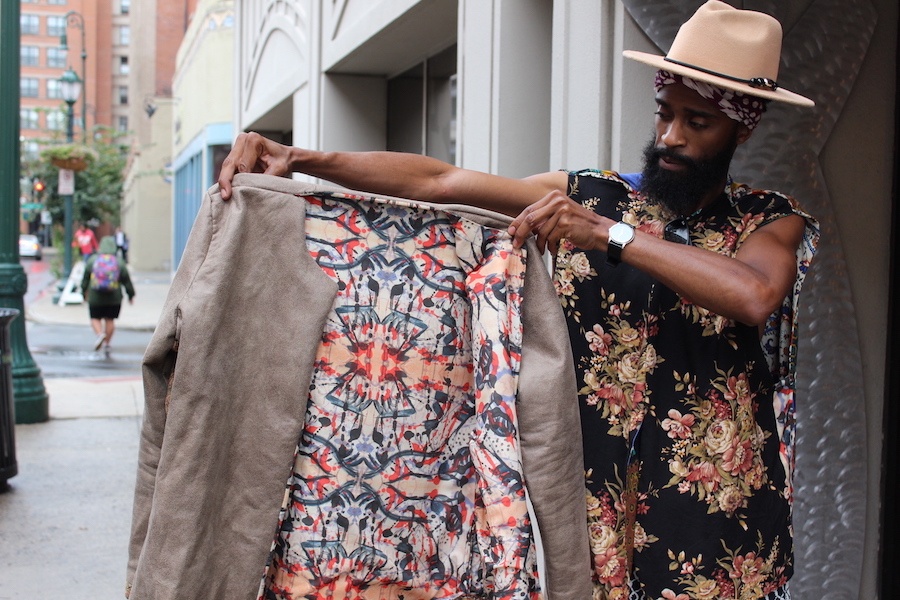 “I have always had a sense of style—just dressing according to how I feel,” he said Wednesday, also by video chat. “That’s really what it’s been about. Just how I feel and how I want to feel. What people think or what’s going on … it’s truly internally based.”

At the beginning, he told Shah, didn’t expect his clothes to be for anyone but him. But after posting a picture of his first piece—a lightweight cardigan with bright, confetti-like dots on sheer white fabric—to social media, orders started coming in. He didn’t even have a website yet. He didn't know what his business plan looked like.

A year later, sitting at Shah’s kitchen table, he was still figuring out what he was doing. But he knew he was interested in having it include her work.

The two started integrating her patterns, Shah still using Spoonflower, and Montgomery using the fabrics “to put accent and character into things”—the inner linings of hoodies and jackets, narrow strips down the side of garments. He said he wanted it each collaborative piece to be like a hidden surprise, with customers delighting in the patterns long after they’d bought the pieces, and discovered what new wonder awaited in every nook and cranny.

“So Eli [Santiago] actually coined the term … it’s like ‘Where’s Waldo,’ but it’s ‘Where’s Studio Strata?’” Shah said. “I’m always looking, but I’m never sure where it actually is.” 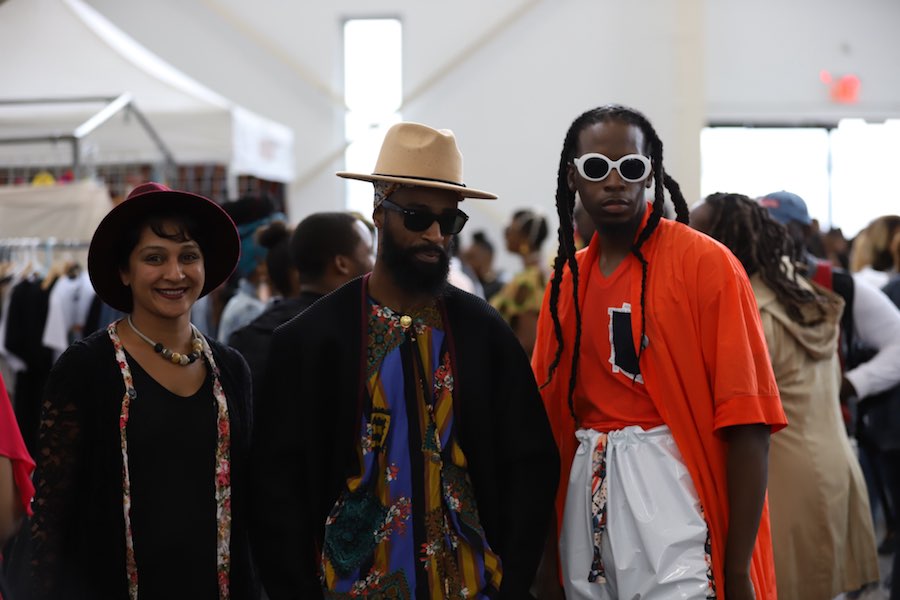 As the two expanded their collaboration, it took on a life outside New Haven. First only to New York, as they hit the Essence Streetstyle Festival, part of New York Fashion Week, with a friend of Montgomery's earlier this summer. As the two entered the space, Shah slipping on a Threads By Tea lace cardigan, they noticed that people were stopping to look at them. Not because they were out of place—because they looked good. Attendees came up to them with phones and cameras, asking if they could take a few photos. Shah and Montgomery knew they were onto something.

Then last month, it crisscrossed continents. Shah, who keeps a globe-trotting travel blog, took a job at an early childhood education center in India. When she arrived earlier this month, she reached out to printmakers she knew from previous residencies, meeting new artists as she went out to gallery openings and rekindled old printmaking partnerships. She joined Pune’s chapter of Urban Sketchers, an international group for artists that also has an arm in New Haven. And she started meeting artists who wanted to know more about her work—and tell her about theirs too.

“When you meet printmakers, it’s like an instant bond because there are so few of us to begin with,” she said, a smile spreading across her face as she spoke. “They’re nerdy about the same things, like ink and paper and things that other people wouldn’t understand.”

Now, she’s interested in doing more with shadow, tone and new processes. She’s looking for curatorial opportunities, including some that would let her bring artists from America to India. She’s working towards using local fabric printers for her work, instead of Spoonflower. She said she thinks the price point will be lower, and the quality better. She is planning on shopping for fabric as soon as this weekend, and sending it to Montgomery. 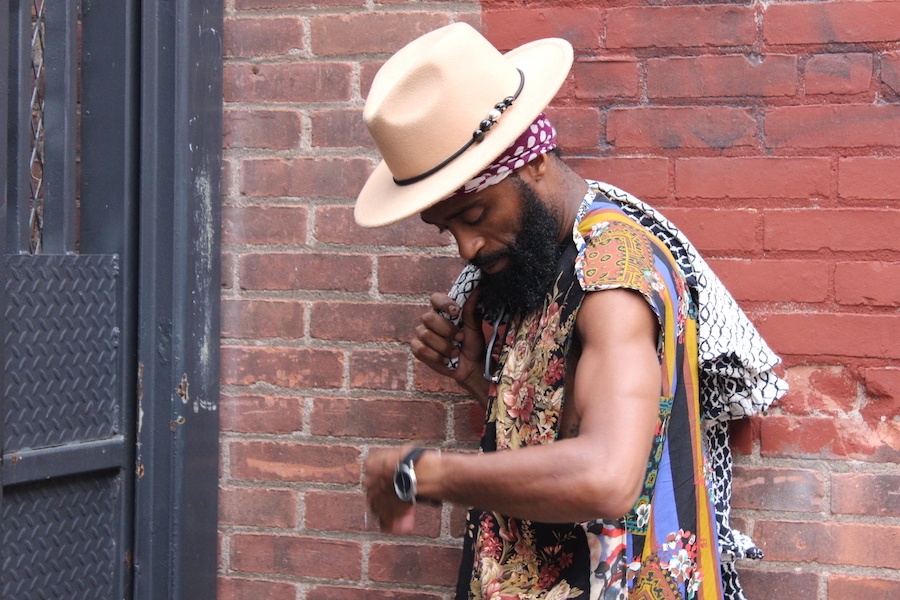 “I know Tea’s work a lot better this time, and I’ve been more involved in it and I’ve seen more of what he does and who he is as a creator,” she said. “And so I think it’ll be a much better experience [than the first time].”

Meanwhile, Montgomery is in New Haven, eagerly awaiting the fabrics that will grow their artistic partnership. He has started hand-sewing pieces more often, using a new sewing machine that will let him “really be in business now.” While he takes time for side projects—the latest is a stuffed stegosaurus for his young son—he’s working toward a studio space, planning on expanding the brand in the coming year.

Keeping Shah and Studio Strata onboard for the ride, he said, is a big part of that. So is working toward a more creative full-time career, so he can be submerged in that world all the time. This fall, he's also preparing for an official launch of Threads By Tea.

“I want to create a story,” he said. “An actual story to tell with each piece … a specific feeling and such. In a way, each word, or each piece of fabric, or each color we use, or each design really says something.”

“Each print [of mine] has a story,” Shah chimed back in over the video connection. “And that story is … that inspiration’s only known to me, because it’s abstract art. So once I explain it or get talking about it you can see it. But originally, you can’t see that when you first look at the work … I think finding that balance between intuition and intention is what my work is all about.”