Sukkot Inspires Effort To Get Out The Vote 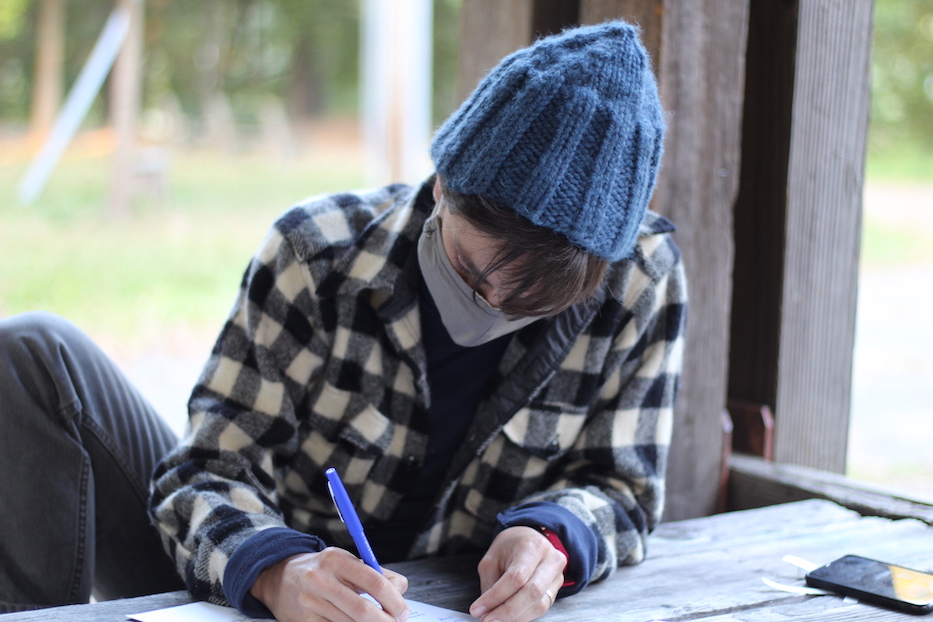 Sunset fell over East Rock Park, where a group of volunteers still had dozens of political letters to write. Benjamin Bechtolsheim detached the light from his bike and hung it on the rafters overhead using a rock. Under the glimmer of the light, seven people continued to scribble into the chilly night, chronicling their personal reasons for voting.

On Tuesday evening, members of Mending Minyan gathered at the College Woods Pavilion in East Rock Park for a nonpartisan letter writing party to get out the vote with Vote Forward. The national organization, for which a letter writing block party also took place on Loomis Place last month, seeks to increase voter turnout through handwritten, personalized, letters sent to voters in swing states.

In particular, Vote Forward is aimed at getting infrequent and underrepresented voters to the polls. Of the 140 letters written Tuesday, 100 will be sent to Florida voters and 40 to Michigan on Oct. 17.

For Mending Minyan, the activity corresponds with the Jewish holiday of Sukkot, a harvest festival that follows the ten days of atonement between Rosh Hashanah and Yom Kippur. The group, a New Haven havurah that was founded in 2017, subscribes to a Judaism that is dedicated to political and social justice work and decoupled from Zionism. While they did not write beneath a sukkah—a temporary outdoor structure under which families sit and eat during the holiday—the pavilion in College Woods served as an impromptu substitute.

“We are entering Sukkot as well as the final month before the election,” Bechtolsheim and Shosh Lovett-Graff wrote in an email before the event. “This is an important and delicate time: the sukkah reminds us of the fragility and impermanence of so much that we take for granted. This holiday coincides with a window of time during which our actions can make a big difference in the upcoming election.” 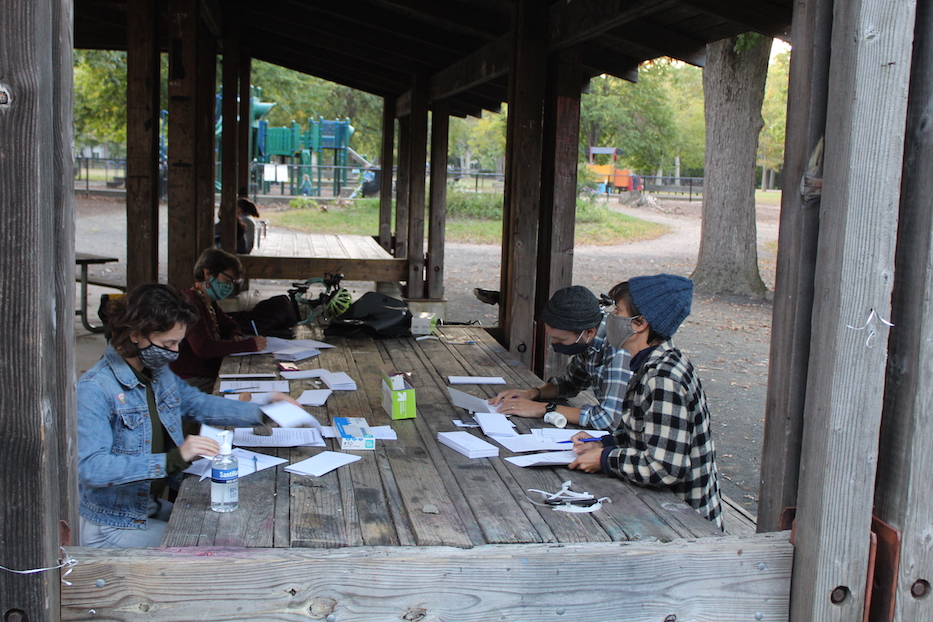 Handwritten letters may not seem like the obvious choice to encourage voting when much of current voter outreach is done digitally through calls, texts, and email appeals. But according to Vote Forward’s studies in Alabama and Ohio, handwritten letters led to voter turnout increases between 1.44 percent and 3.4 percent respectively.

That could be enough to nudge a swing state: in 2016 Donald Trump won Michigan by approximately 11,000 votes or .23 percent. Voters who are motivated by the letters often vote for Democrats, despite the nonpartisan messaging approach.

The event was inspired by Bechtolsheim’s longtime friend Zach Stein, who committed to writing 1000 letters up to and through the election. While Stein is based in California, he has worked to spread the word to potential voters around the country. As they wrote, members spoke about what had brought them out to the park. The temperature dropped: a chill filled the air and dusk rolled in.

After first getting involved with political work in 2006, Bechtolsheim said he believes voting and elections are crucial to protecting and expanding rights for communities that have been historically marginalized. He proposed the idea to the group and was met with enthusiasm.

In between stretches of silence except for the sound of blue pen on paper, members of the group chatted about their hometowns, early political formation, and the string of holidays that fill this time of year, often regarded as the holiest in the Jewish calendar because it marks the New Year. Off to the side, dozens of children ran around. Their peals of laughter filled the park.

Caroline Scanlan, who is married to Bechtolsheim and works for the Urban Resources Initiative, said the effort to get out the vote aligns with the group’s core value of liberation. The group most recently joined a coalition of more than 600 Jewish organizations in support of Black Lives Matter.

“The election is one piece of the puzzle but is an important piece,” Scanlan said. “I believe in our power to influence the government and … the policy that shapes our lives.”

The event marked the group’s second in-person gathering since March, when it moved weekly Shabbat and holiday services online due to COVID-19. Two weeks ago, members gathered at the city’s West River for the practice of Tashlikh, during which people symbolically cast off their sins in a body of water. They have continued to meet otherwise on Zoom.

For Lovett-Graff, those two gatherings speak directly to the intersection of faith and social justice work that she sees as part of her own practice. Born and raised in New Haven, she increased her activist footprint while working with Kol Tzedek, a justice-focused synagogue in West Philadelphia. She said she also lives her faith through Books Through Bars, a Philadelphia-based nonprofit that sends free books to incarcerated people and educates the public about the carceral state.

She said that she votes on behalf of people who cannot vote, such as incarcerated people, immigrants, and citizens of other countries who may be adversely affected by changes in American trade decisions and foreign policy.

“As Americans we can’t see the impact of policy as it extends to the rest of the world,” she said. “This election is not an end-all-be-all, but a part.”

After the election, she hopes that people will become more involved and continue to work with grassroots organizations. Scanlan echoed the sentiment by encouraging people to keep up local and state elections in years that do not align with presidential elections.